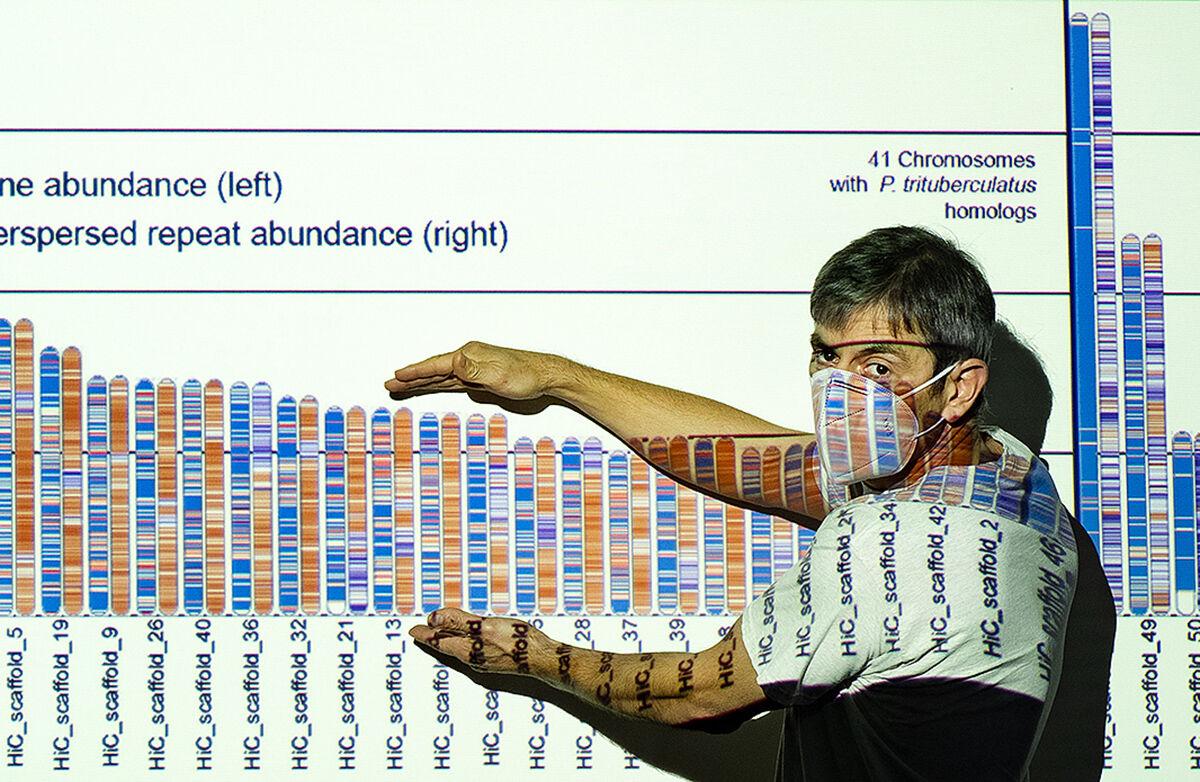 Tsvetan Bachvaroff, a researcher with the University of Maryland Center for Environmental Science, points to chromosome 12, the molt-inhibiting chromosome, in a diagram of the blue crab’s genetic blueprint. 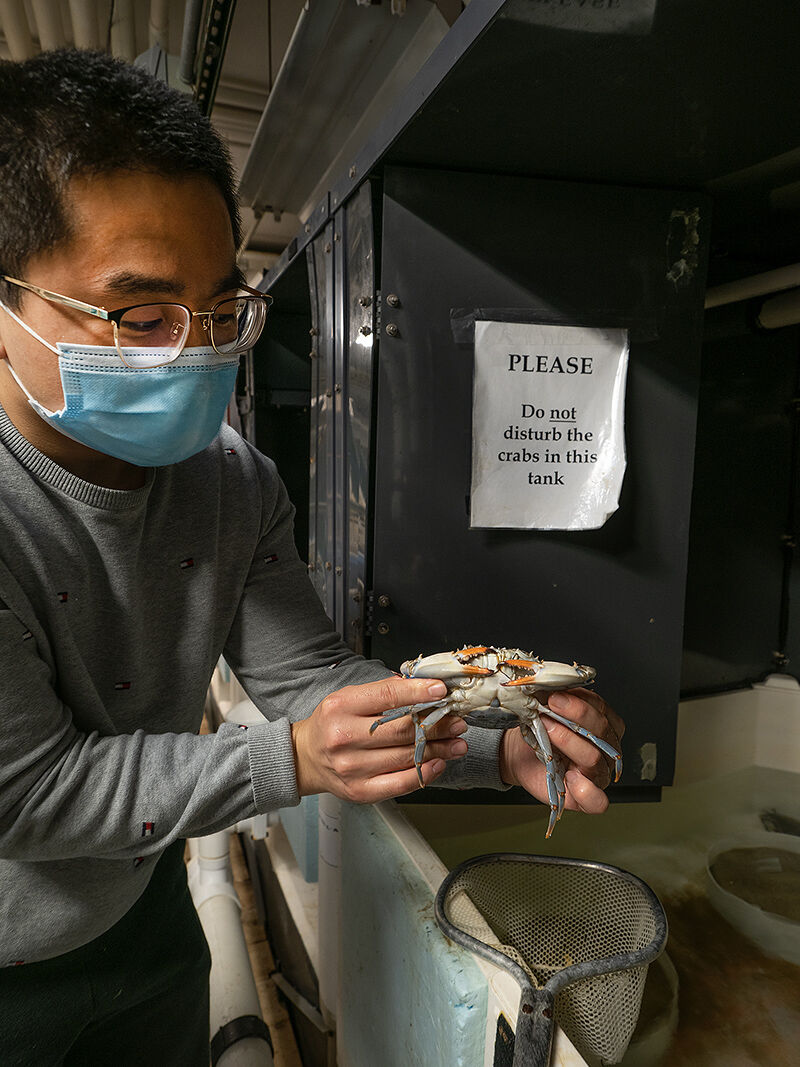 Doctoral student Tao Wang handles a fertilized female crab at The Institute of Marine and Environmental Technology in Baltimore. 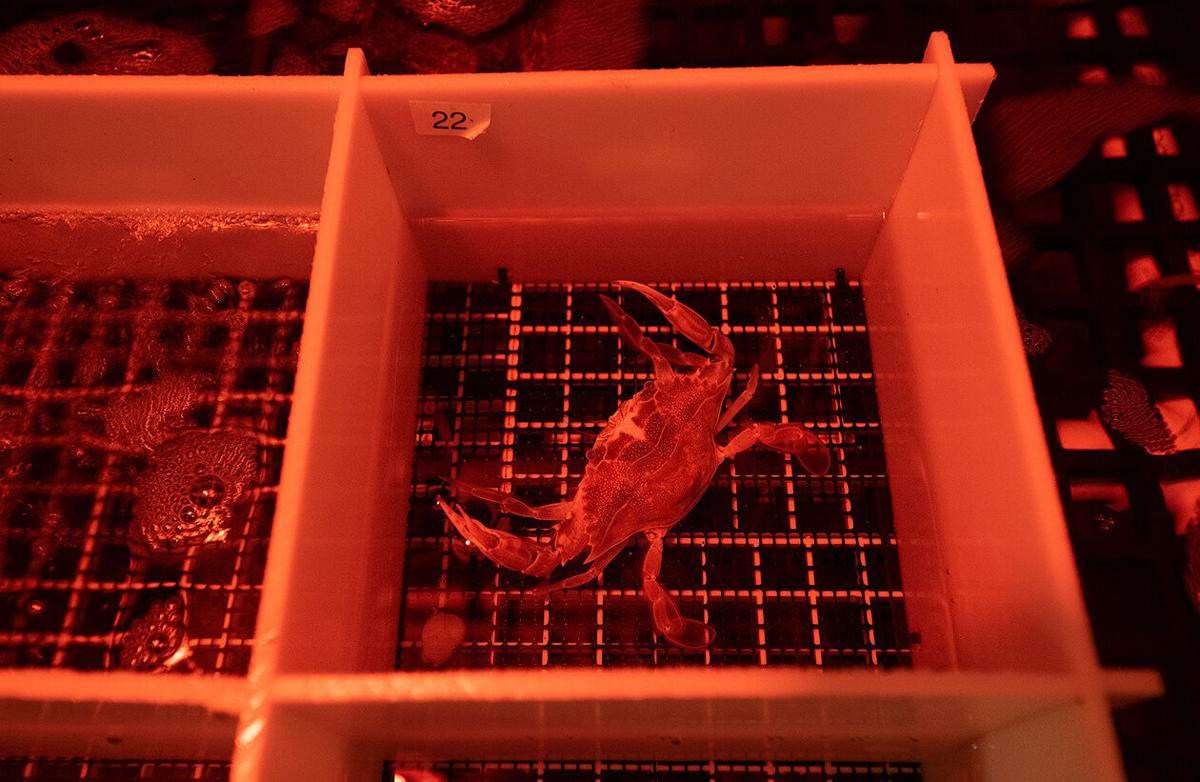 This blue crab was grown from an egg at the Institute of Marine and Environmental Technology in Baltimore to aid genome research. 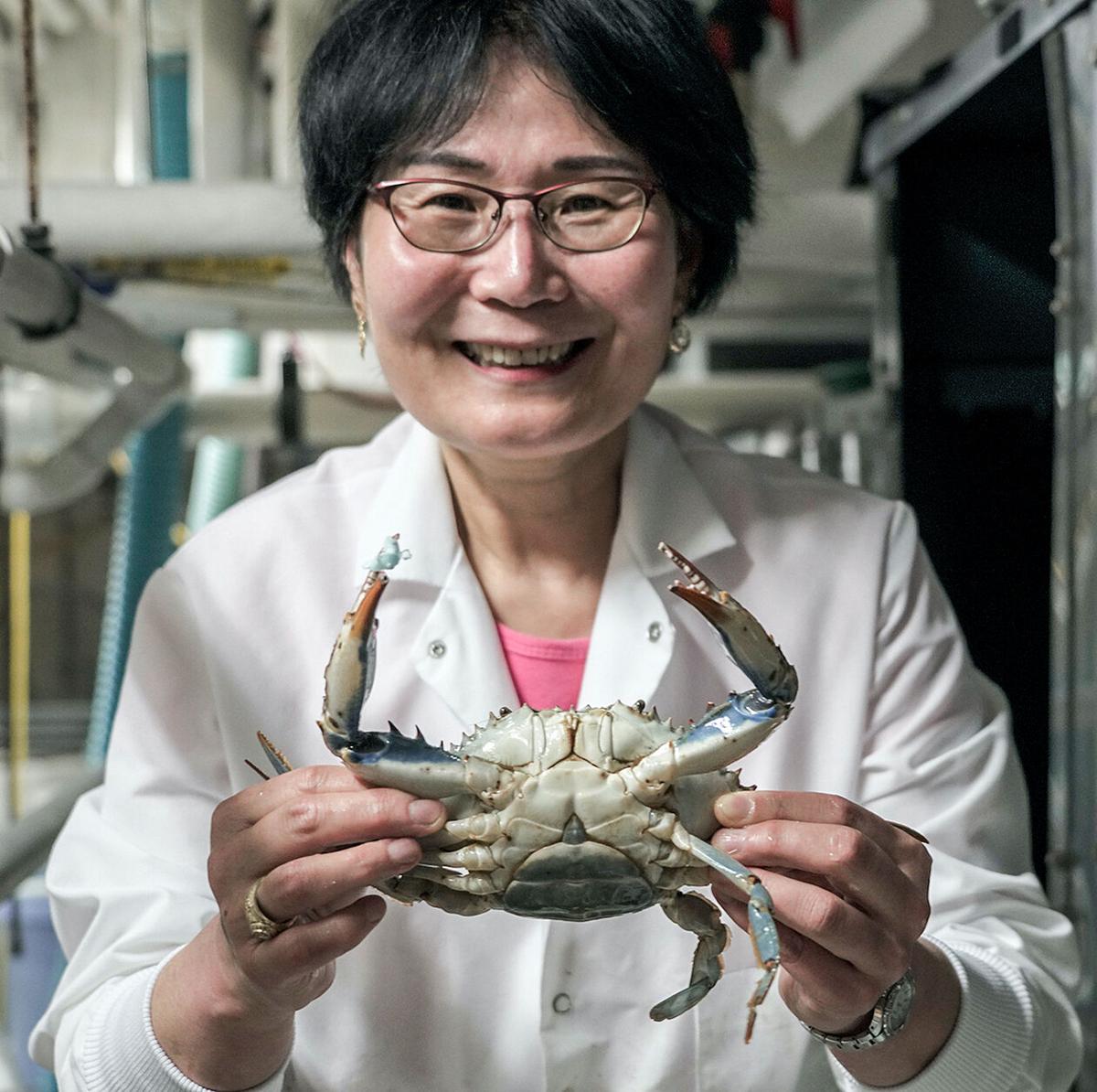 Researcher Sook Chung led research at the University of Center for Environmental Science that untangled the blue crab’s genetic blueprint.

A quest for the ultimate blue crab. An unprecedented marathon effort to cultivate crustaceans in a lab. A supercomputer crunching data night and day for six months straight.

Researchers with the University of Maryland Center for Environmental Science say they have unlocked the complete genetic code for the blue crab, a keystone of the Chesapeake Bay’s ecosystem and regional seafood staple.

The facility’s feat comes 18 years after the human genome was first sequenced. Like that landmark effort, the untangling of the blue crab’s genetic blueprint could lead to many practical applications, according to the Maryland research team. Among them: potentially opening the door to farming crabs as an alternative to harvesting wild populations.

“Understanding what makes them successful is located in the chromosomes,” said Sook Chung, the researcher who led the project at UMCES’ Institute of Marine and Environmental Technology on Baltimore’s Inner Harbor. “Knowing the full genome, we are several steps closer to identifying the genes responsible for growth, reproduction and susceptibility to disease.”

Researchers will have no shortage of places to look in cracking those mysteries. The study found between 40 and 50 chromosomes in the crab genome, nearly twice as many as its human counterpart. Within those chromosomes, researchers uncovered about 24,000 genes, slightly more than what humans have.

While the human genome took about 13 years to unravel, technological advances enabled the blue crab researchers to finish their work in a little more than four years. With the team’s Oct. 8 announcement, the blue crab joined the Chinese mitten crab and the blue swimming crab as the only crab species whose genomes have been unscrambled.

Blue crabs (Callinectes sapidus) can be found in the Atlantic Ocean from Cape Cod, MA, to Argentina, as well as in the Gulf of Mexico. Their common name is derived from their lustrous blue claws. The crabs are one of the Chesapeake’s most valuable commercial fisheries, with an annual dockside value of about $80 million.

The genome study began with a hunt for a singular crab, Chung said.

As the weather turned chilly in the fall of 2018, she found herself aboard a waterman’s deadrise boat just offshore from Pasadena, MD. She returned to her lab with several females. One of those females survived to adulthood, mated and produced offspring — one of which would become “The Chosen One,” as Chung called it.

The scientists were able to obtain the crab’s DNA. But in its original form, the genetic code is out of order and must be sequenced. That job fell to Chung’s colleague, Tsvetan Bachvaroff, and a powerful computer that could process the onslaught of data. It had to run continuously for six months to accomplish that feat.

“Imagine you take several volumes of an encyclopedia, and you have a hundred copies of each volume. You put them all through a paper shredder, and then you have to use that to reconstruct the original volumes of the encyclopedia,” Bachvaroff said. “Once the encyclopedia, or genome, is back in the correct order, you can begin to identify genes and use it like a reference book, looking up genes to answer questions.”

“The Chosen One” was notable for another reason: By raising a crab through each of its life cycles, Chung’s lab became the first in North America to “close the life cycle” of a blue crab, she said.

They published their findings in the June edition of the journal G3: Genes/Genomes/Genetics. UMCES plans to make the genome publicly available so scientists anywhere can tap into it.

The elaborate sequence couldn’t be sold for profit anyway, at least under the current interpretation of the patent law. The U.S. Supreme Court ruled in 2013 that naturally occurring genes are not patentable.

That can make it difficult to amass funds to bankroll a genome project, Chung said. Her study took a somewhat unusual approach to lining up funders. More than half of the $250,000 came from private donations — not the usual troupe of foundations and government agencies.

Mike and Trish Davis, a couple enmeshed with Maryland environmental advocacy efforts, chose to champion the study after soliciting project ideas from leadership at the Marine and Environmental Technology center. “I thought it was a sexy project but also a challenge to fund because a lot of people don’t understand the genome,” said Mike Davis, a former software executive.

They brought in several other deep-pocketed donors, persuading them during private tours of the facility.

Now that the genome has been sequenced, researchers can open new avenues of inquiry into the blue crab, the researchers said.

It could be used, for example, for tracking the geographic origins of crab meat purchased at markets and restaurants. That could help advocates for Bay-caught crabs in their fight against the scourge of improperly labeled imported crab meat.

The genome could also make it possible to sustain blue crab hatchery or aquaculture operations in the Bay region – and thereby reduce pressure on the wild population, Bachvaroff suggested. One of the biggest obstacles in aquaculture is that crabs molt their hard shells as they grow, and their fellow crabs will eat them while they’re defenseless. If their genetic code could be harnessed to cause them to molt at the same time, enough might survive into adulthood to make such ventures viable.

“This is the first step,” Chung said.