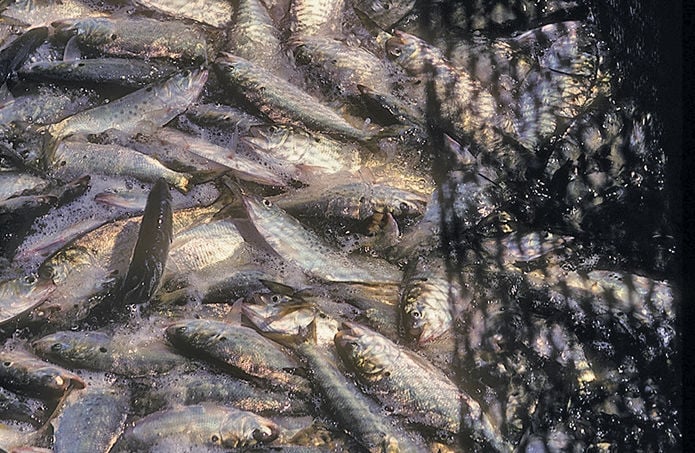 Menhaden are an important food source for finfish in the Chesapeake Bay, including striped bass. 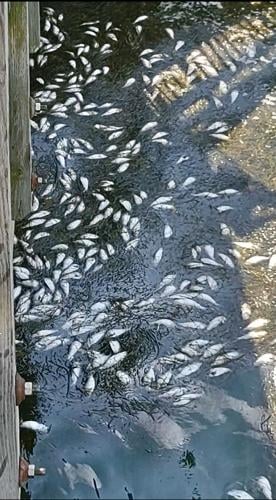 Small, oily fish known as menhaden pool up dead along a dock on the Eastern Shore of Virginia in July 2022. 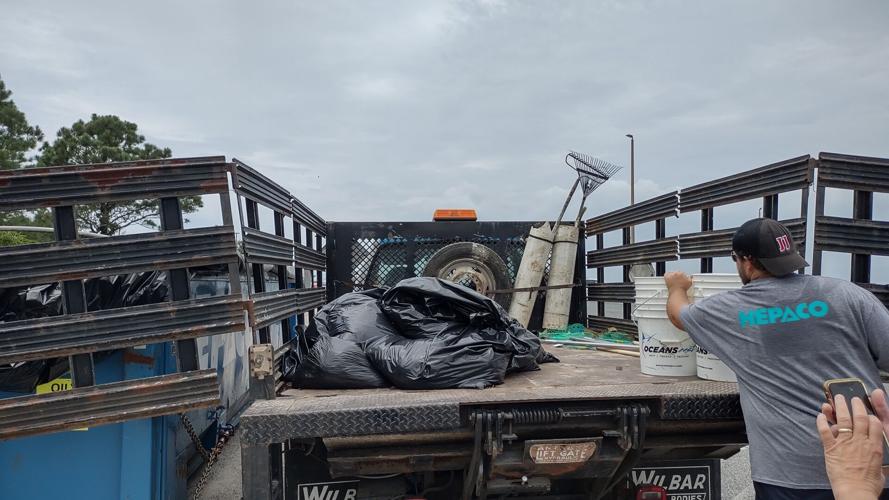 Bags of dead fish are seen after a massive spill in July 2022 from a fishing boat affiliated with Omega Protein's menhaden harvest in the lower Chesapeake Bay.

Recreational anglers and environmentalists are ratcheting up their pressure on Virginia leaders to shut down large-scale commercial menhaden harvests in the Chesapeake Bay.

Advocates collected more than 10,000 signatures calling on Republican Gov. Glenn Youngkin to do more to protect the small, oily fish. They submitted the petitions in late October to Youngkin’s office and to the Virginia Marine Resources Commission, which manages the state’s saltwater species and their habitats.

Some of those supporters are independent commercial operators who, Medice said, are struggling to make a living. “They’ve got empty coolers, and that doesn’t happen,” she told the Marine Resources Commission at its Oct. 25 meeting.

Their ire is directed at Omega Protein whose Reedville, VA-based fleet of fishing vessels, guided by spotter planes, is responsible for about 70% of the East Coast menhaden harvest. The company processes what it catches into fish oils for humans, feed for pets and other products.

In its latest assessment, released in August, the Atlantic States Marine Fisheries Commission declared that the species wasn’t being threatened by overfishing.

But conservation groups say that the overall assessment didn’t necessarily reflect the condition of the Chesapeake Bay’s menhaden population. They contend that Omega’s Baywide annual take, capped at 51,000 metric tons of menhaden, doesn’t leave enough for striped bass and other predators to eat.

“The menhaden are out there to feed a whole lot of other critters,” said Chris Moore, a Virginia-based scientist with the Chesapeake Bay Foundation. “If the bait’s not there, it means the [larger] fish aren’t there.”

In June, a coalition of 11 national and Virginia-based groups petitioned Youngkin to put the Bay off-limits to Omega Protein. Some state lawmakers, including Democratic Sen. Lynwood Lewis and Republican Del. Robert Bloxom, both of whom represent the Eastern Shore, have signaled they will file legislation directing state agencies to study whether menhaden are becoming locally depleted.

Omega spokesman Ben Landry said he doubted that such a study would be possible. Menhaden migrate in and out of the Bay, causing their numbers inside the estuary to ebb and flow dramatically, he explained.

“I think the concept of it is great,” Landry said. “I just don’t know how that gets done with any credibility.”

The company has also been criticized for two fish spills this summer involving one of its fishing contractors.

During a July 25 incident, an Ocean Harvesters-affiliated fishing captain told his crew to release a net full of menhaden about a mile off Kiptopeke State Park because of the presence of red drum in the net. A separate spill took place July 5 when a net tore, releasing thousands of dead fish onto Silver Beach.

In both cases, Omega dispatched crews to clean up the rotting fish. Landry described those as rare events that happen three or four times a year out of 2,000-plus sets of their nets.

Virginia Marine Police Chief Matt Rogers said that Omega wouldn’t be charged in either case. Doing so would require establishing that the acts were committed with “criminal intent,” and the investigation showed that there was none, he said.

“I understand the public outcry, but we want to make sure we don’t have a knee-jerk response,” Rogers said.

Still, the spills have stirred resentment on the lower Eastern Shore. “Here in Northampton County, we don’t gain from Omega’s actions at all, and yet we had dead fish up and down about 15 miles of our coastline to cope with,” said Betsy Mapp, chairwoman of the Board of Supervisors. “That can’t continue.”

Youngkin's press office said the governor has been working on the issue since taking office last January.

“Since day one, the administration and VMRC have been engaged with stakeholders from Virginia’s recreational fishing about these issues and the importance of ensuring commonsense solutions to protecting and cleaning up the Bay," the spokesperson said in a statement. "We will continue to look for solutions that protect the health of the Bay and all of Virginia’s economic activities that rely on the Bay.”