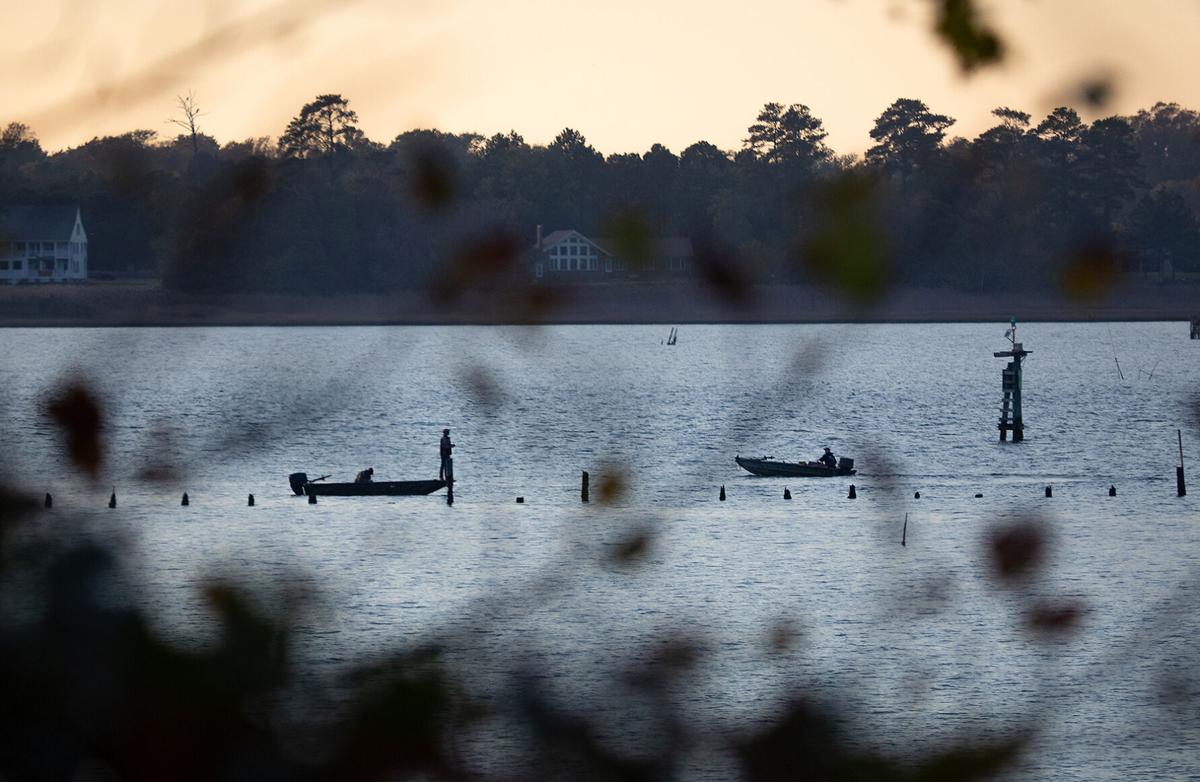 Workboats ply the Nansemond River in Virginia, where bacteria levels have increasingly closed parts of the river to oyster harvests. 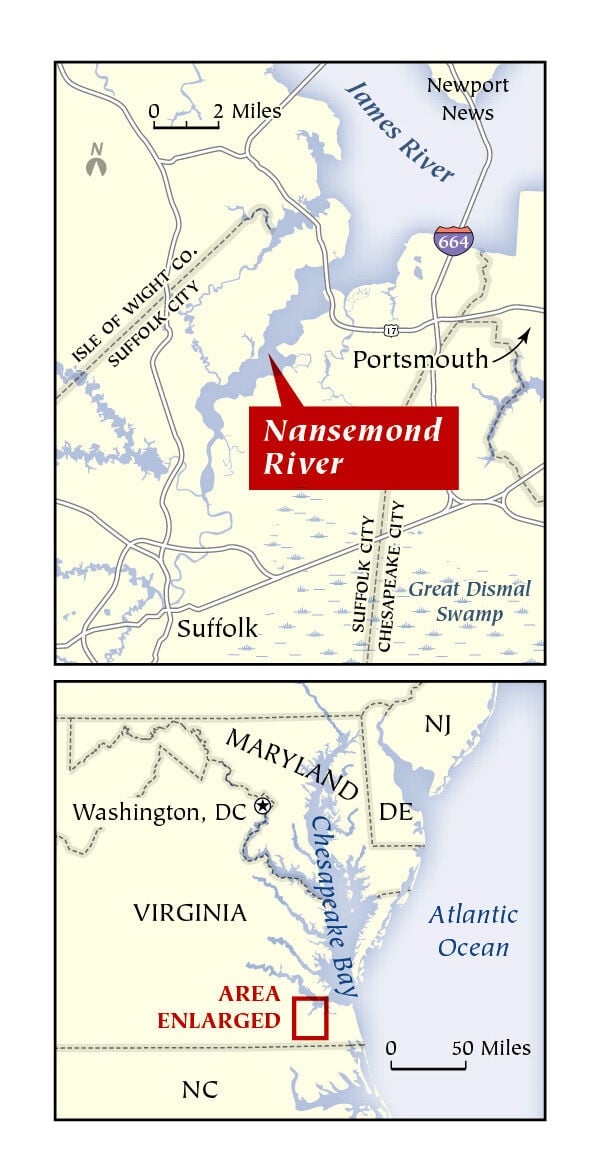 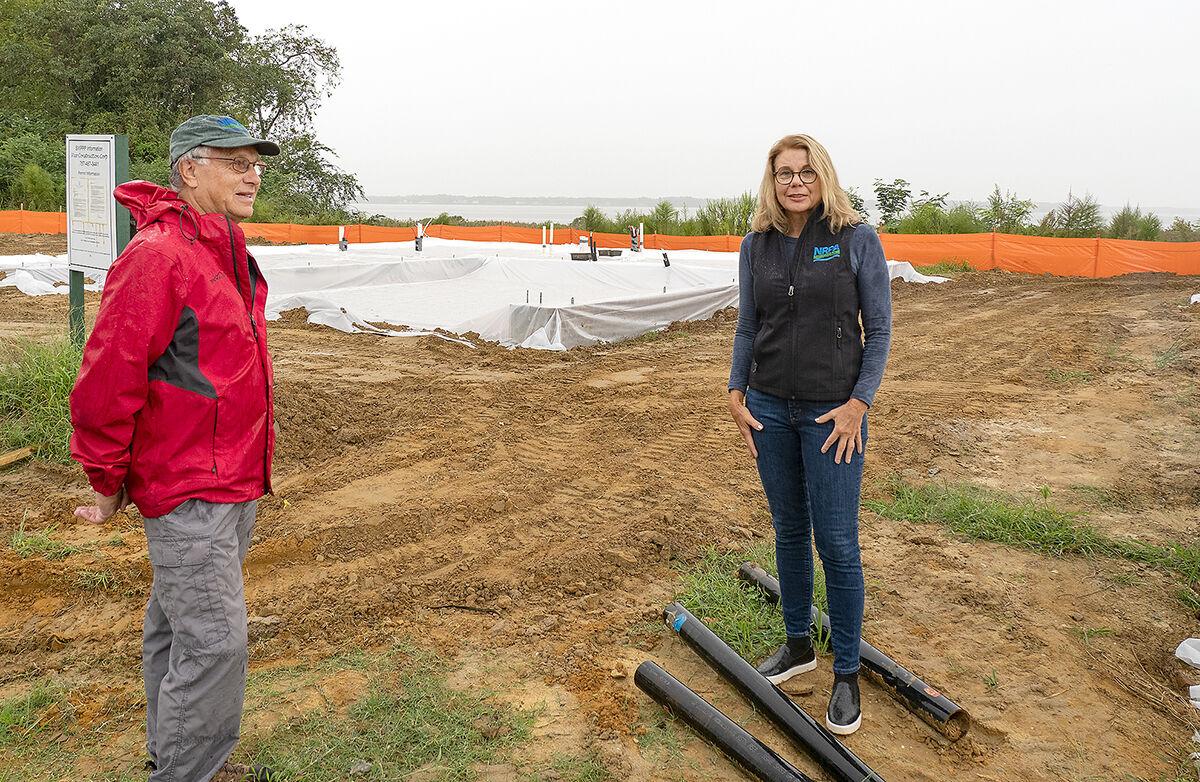 A group of citizens started the organization a decade ago to help maintain water quality in the midst of development. 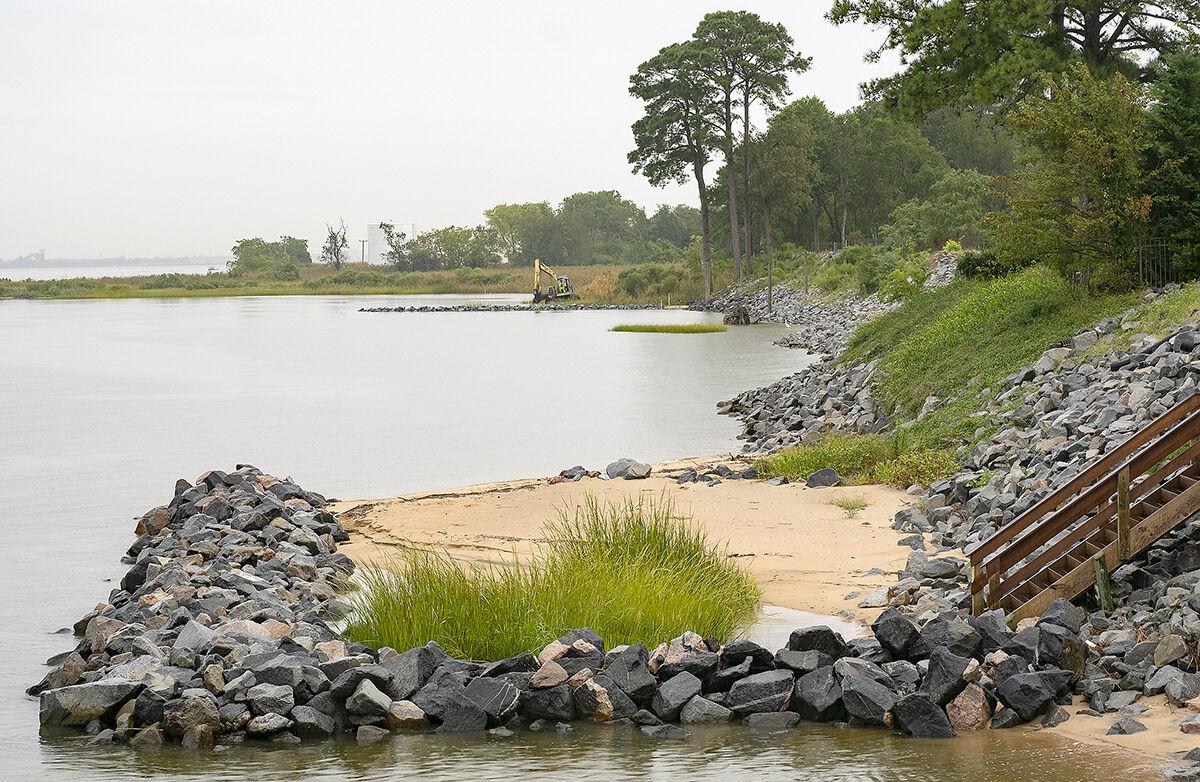 An engineered shoreline is constructed along the Nansemond River in Suffolk, VA.

Robert Johnson spends as much time watching the weather forecast as he does harvesting oysters these days.

Since about 2014, increasingly larger areas of the Nansemond River he’s been scouring for market-ready oysters for the past 40 years have been closed to harvesting. Some closures are temporary, driven by spikes in pollution from stormwater runoff and sewage overflows. Others are permanent.

While wastewater treatment has helped to reduce the bacteria pollution that makes shellfish unsafe to eat in many Chesapeake Bay waterways, the Nansemond has been heading in the wrong direction for about six years — a time of increased population growth in its watershed.

This year, heavy rains in late September caused aging pipes already under repair to gush millions of gallons of sewer-tainted water into the Nansemond, causing the Virginia Department of Health to close almost all of the beds Johnson and others would have harvested for several days.

“We have old [sewer] lines carrying the effluent and more customers on those lines. The system just cannot handle it,” said Johnson, who owns Johnson and Sons Seafood in Suffolk, VA. “If you don’t expect to have storms [in the fall] with 3–4 inches of rain in a 24-hour period, then your system isn’t set up to handle what it should be set up to handle.”

The Hampton Roads Sanitation District, which manages the Nansemond Treatment Plant and 17 other plants like it in the region, has several projects in the works to replace or fix aging pipes. But while the district has been working under a consent decree with the U.S. Environmental Protection Agency since 2010 to reduce sewage overflows in the system, the decree does not include specific deadlines for the work.

Johnson is a reluctant spokesman for the few oystermen who still harvest in the Nansemond — and who think the city and regional water treatment authority aren’t doing enough to maintain the water quality they need to keep oystering in the midst of a growing local population.

In a lawsuit headed to the Virginia State Supreme Court Nov. 4, the oystermen say not protecting the water quality on which their oyster leases and livelihoods depend amounts to damaging property. They are seeking compensation for their loss of oysters resulting from untreated sewage and wastewater releases that rendered the river bottom closed to harvests.

“The only people protecting the Nanse-mond River, in my opinion, is the oystermen,” said Joe Waldo, an attorney representing them in the case. “If it weren’t for the oystermen, I don’t think the public would know about these discharges of raw sewage.”

Oystermen in this Virginia corner of the Chesapeake Bay region have a history of raising red flags about local water quality.

In 1925, state officials commissioned a study to determine what was ailing the shellfish industry after the closure of a large oyster-producing region near Hampton Roads. Untreated sewage turned out to be a major culprit. That finding eventually led to the creation of the Hampton Roads Sanitation District to treat and reduce the amount of sewage flowing directly into local waters.

When the sanitation district was first created in 1940, about 30 million gallons of raw sewage were being discharged into the river daily in the absence of centralized wastewater treatment. Now, according to general manager Ted Henifin, the district’s plants treat an average of 150 million gallons a day.

“Unfortunately, bacteria impairment of local waterways continues to be an issue,” Henifin wrote in an email.

Bacterial contamination can come from human sources, such as sewage and septic system leaks, as well as from pet waste and wildlife.

The sanitation district recently worked with the city of Suffolk and the Nansemond River Preservation Alliance on a microbial source tracking program to identify potential human sources of high bacteria levels found in the river, tracing the sources back to aging infrastructure and some septic systems in need of repair.

Elizabeth Taraski, president and CEO of the river alliance, said the bacteria remain a pesky problem, particularly for the watermen trying to work in and near the Nansemond River.

A group of citizens started the organization a decade ago after seeing “what had happened to waterways in Virginia Beach and Norfolk — and seeing that the next area for development was Suffolk,” Taraski said.

The river group has been tracking water quality markers ever since. Levels of nitrogen, the largest cause of water quality problems in the Chesapeake Bay, are actually low in the Nansemond. But bacteria trends since 2014 have not been good. Bacteria levels have been increasing, as has the amount of phosphorous and the amount of murkiness in the water, according to the river alliance’s reports.

In 2019, another shellfish harvesting area in the river that had been considered healthy was declared conditionally approved for harvesting, meaning a half-inch rain could close it to oystermen for several days.

“That was another red flag,” Taraski said. “Our concern is that we’re having so much more development in Suffolk — more impervious surfaces and dogs and potential sources of bacteria — and we need to educate all citizens on their responsibility.”

The city of Suffolk stretches across an area the size of most Virginia counties, making it the largest footprint of any city in the state. The southern portion of Suffolk is rural and largely agricultural, with historical roots in peanuts. The birthplace of Mr. Peanut, the marketing icon of Planter’s Peanuts, Suffolk still hosts an annual Peanut Fest every October (except this year, due to COVID-19). Southeast Suffolk opens into the more than 100,000-acre Great Dismal Swamp National Wildlife Refuge.

The Nansemond weaves through the heart of Suffolk’s developed core, running nearly 20 miles to meet the James River just before it pours into the Chesapeake. Located just west of bustling Norfolk, Suffolk’s population has grown by nearly 10% the last decade, reaching almost 94,000 in 2019.

Suffolk spokeswoman Diana Klink said the city has seen growth in several economic sectors as military families, in particular, expand their hunt for affordable homes farther afield of Norfolk Naval Station. To keep up with demand, the city is in the midst of a house-building boom with 11,600 residential units in the pipeline, Klink said, an increase similar to what the region saw during the housing boom of 2005.

Johnson said he’s watched that growth pick up on land and seen the impact in the water, too.

Jon Mueller, vice president for litigation for the Chesapeake Bay Foundation, said he’s seen this pattern — new development followed by shellfish harvest closures — play out in several places around Hampton Roads over the years. Similar scenarios have also evolved over the decades with pockets of development along Maryland’s Western Shore. Mueller wrote an amicus brief supporting the oystermen’s lawsuit to the Virginia Supreme Court.

“It seemed pretty unfair that people can spend money to lease oyster or clam bottom only to have that leasehold diminished or destroyed because of a decision to develop adjacent land,” Mueller said. “If we want to preserve that aspect of Bay life and the economy, then I think we need to be more protective of where we put growth and how we do it.”

The oystermen agree, which is why they appealed a lower court’s decision to the state Supreme Court. The Suffolk Circuit Court judge had cited in his opinion a 100-year-old U.S. Supreme Court case that “held an oyster bed lessee’s property rights [to use the river bottom] is subordinate to the locality’s right to pollute the waterways.”

Waldo, the oystermen’s attorney, argues that such a reading of the law is outdated given the advent of the 1973 Clean Water Act and the ability of current technology to provide for both uses by treating wastewater. The case could end up hinging on a reading of state property rights laws.

Either way, Waldo thinks the technology exists to reduce bacteria pollution much more quickly — and perhaps fast enough to save the oyster grounds on which his clients depend. Adding additional development to a sewage and wastewater system that is antiquated and already subject to leaks and overflows amounts to the wastewater utility “not doing the job,” he said.

“I think Suffolk is entitled to its due. It’s got a lot of bays, estuaries, wetlands; it’s beautiful and more rural,” Waldo said. “Today, people are recognizing it as a great place to live. But the city can’t just let it expand and not take care of the infrastructure.”