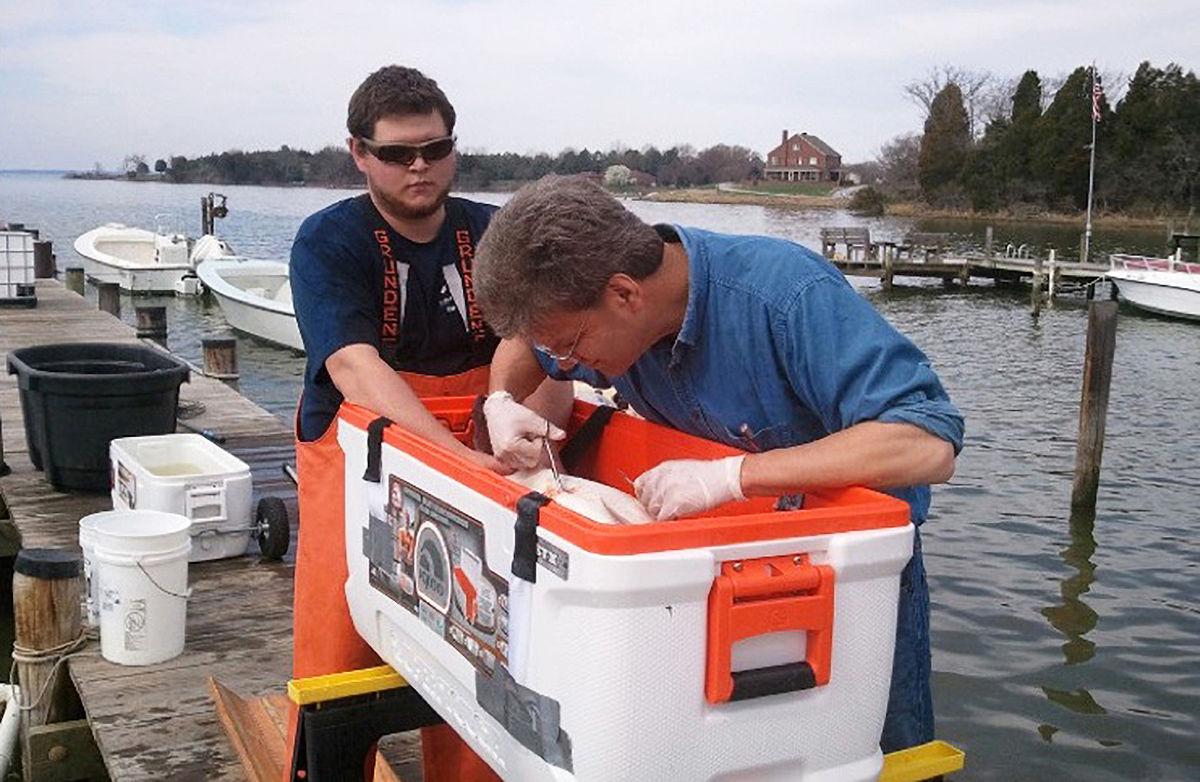 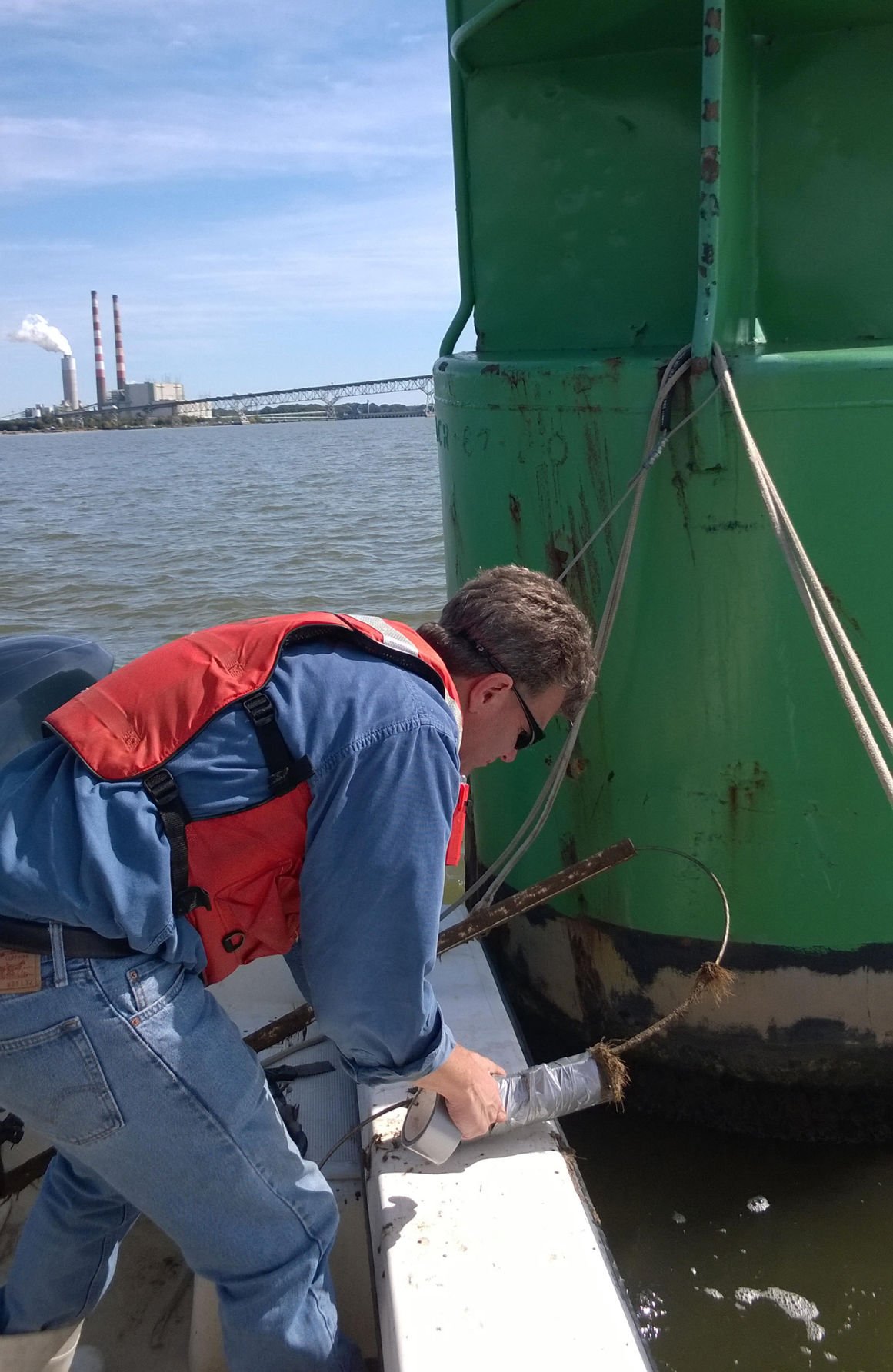 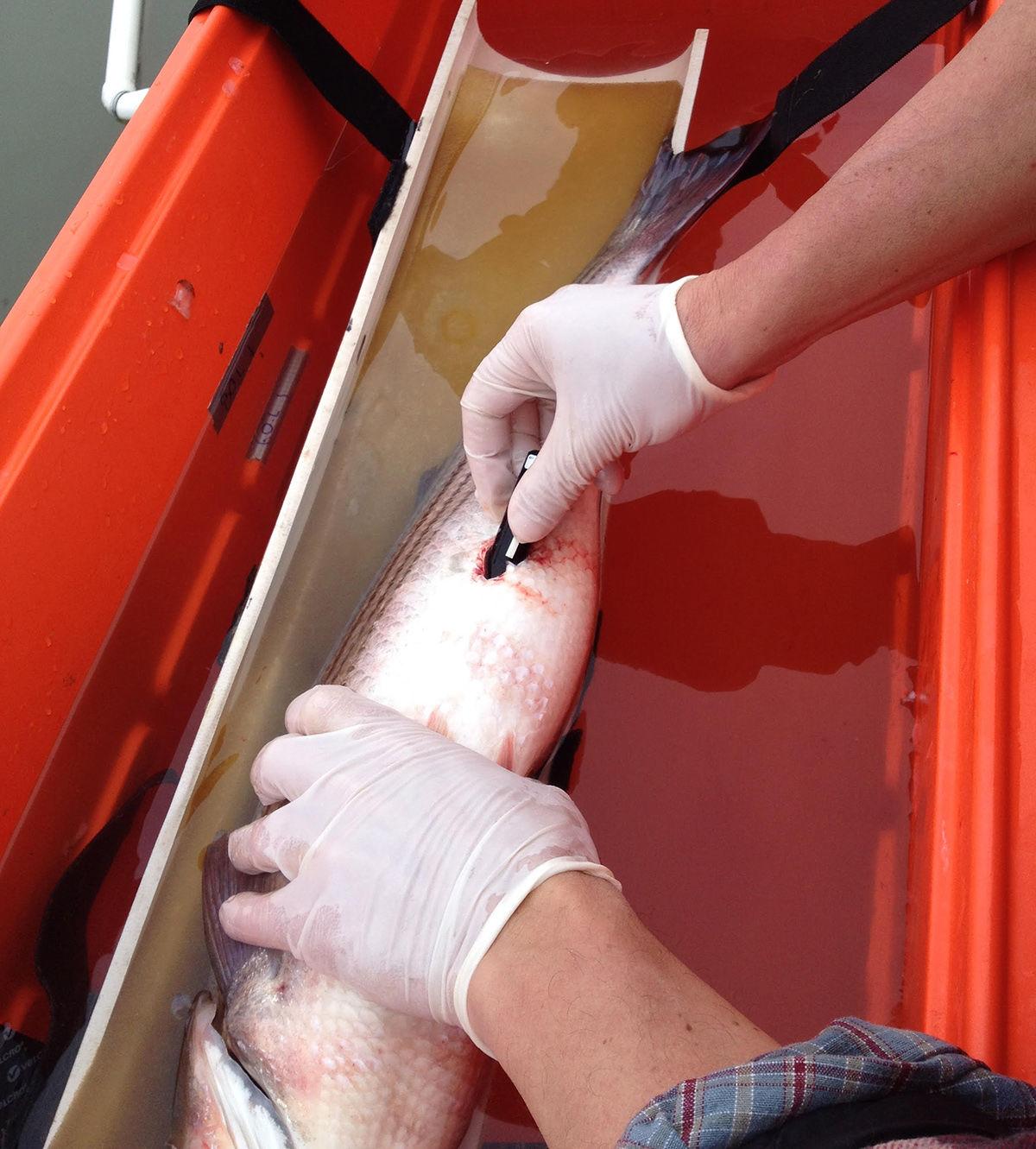 Acoustic transmitters inserted in striped bass caught and released on the Potomac River were tracked over a 4-year period to learn about their movements. Smaller fish smaller stayed in the Chesapeake Bay year-round. (UMD Center for Environmental Science)

Striped bass that stay year-round in the Chesapeake Bay are dying at nearly twice the rate of those that migrate each year to the Atlantic Ocean, a new study has found. The cause or causes aren’t clear, but the lead researcher said that it needs to be addressed to right a troubling decline in the prized finfish.

An electronic tagging study led by scientists from the University of Maryland Center for Environmental Science found that large mature striped bass leave the Bay every year to roam coastal waters until the next spring. Those smaller, younger fish that remain in the Chesapeake died off at the rate of 70% a year.

“The mortality rate is alarming,” said Dave Secor, a professor at the UMCES Chesapeake Biological Laboratory in Solomons. “If fish are dying at greater than 50% or 60% a year, that’s a problem.”

The study, published Thursday in the journal PLOS One, appears likely to draw further attention to disease and overfishing, two suspects in the decline of striped bass, also known as rockfish, which are among the most sought-after fish in the Chesapeake and along the Atlantic coast.

UMCES scientists implanted acoustic transmitters in 100 striped bass from the Potomac River and tracked their movements over four years. Signals emitted by their tags were picked up as they swam by receivers stationed in the Bay and along the coast — a kind of E-Z Pass network for fish, as Secor described it.

The telemetry data revealed that fish 32 inches and longer left the Bay as soon as spawning ended in spring and migrated as a group north to near-shore waters off Massachusetts, where they are a favorite target of recreational anglers. They headed south in late fall, returning to the Potomac by the next spring to spawn.

That migratory pattern is well known, but the tagging study helped scientists get a firmer handle on which fish migrate, which do not and where they wind up.

“The scale of this is unique,” Secor said, because it relied on collaboration with a number of partners. “We couldn’t have done this study otherwise.”

While it’s been thought that only large female striped bass migrate out of the Bay, Secor said the study found that larger tagged male fish also joined the exodus.

Over time, the receiver network stopped detecting signals from some fish, which the scientists took as evidence that they had died. The much lower 37% mortality rate seen for migratory striped bass suggests something is happening to those fish staying in the Bay.

The mortality rates seen in the study are similar to the estimates the Atlantic States Marine Fisheries Commission relied on in determining in 2019 that striped bass have been overfished in recent years. The Congressionally authorized panel, which regulates migratory fish in coastal waters from Maine to Florida, called for new fishing restrictions to reduce striped bass mortality by 18%.

Of particular concern to fisheries managers was catch-and-release, a popular sport fishing practice, because scientists have found that a significant percentage of fish die after being hooked and returned to the water. That mortality is highest in summer, when warm water and lower oxygen levels add to the stress of being caught and handled.

The restrictions imposed in the Bay, which halve the allowed daily recreational catch to one fish of 19 inches or longer, have been a bitter pill for anglers.

In Maryland, the fishing season is also closed for two weeks in late August, when the water tends to be warmer – though not as warm as in July or early August.

Even though Atlantic striped bass are all members of the same species, Secor said the finding that fish spawned in the Bay behave differently based on size could warrant treating them as a separate subgroups of the coastal population. The migration of larger fish along the coast was part of what helped striped bass recover in the 1980s, the study notes, when “extremely intense” fishing pressure in the Bay drove the population down  lower than it is now.

The study’s authors suggest the high Bay mortality could be linked to mycobacteria infections, which have been found to afflict the vast majority of striped bass in the Chesapeake.

A different tagging study of resident striped bass estimated that 64% of them died in 2017, similar to the 70% mortality rate observed the latest research.

The die-off seen in 2017 was attributed mainly to mycobacteria, but Secor said the frequent catch-and-release of fish that are too small to be kept may also be playing a role in increasing mortality. Even if most fish survive being caught and released with care, he noted, that fish may get hooked more than once.

“If you’re bringing a fish up to the boat several times …cumulatively it can be significant,” Secor said.

For a time-lapse video showing the tagging operation, go here.