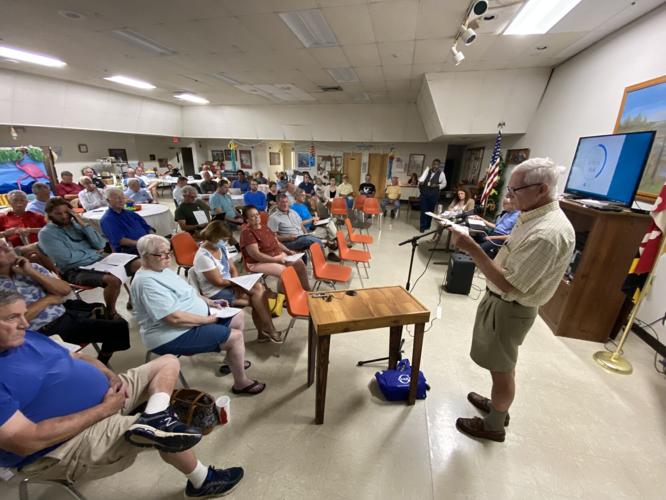 Researchers, local residents and representatives from environmental groups gathered at a state hearing on Aug. 10, 2022, to discuss a potential discharge permit for a salmon farm on Maryland’s Marshyhope Creek. 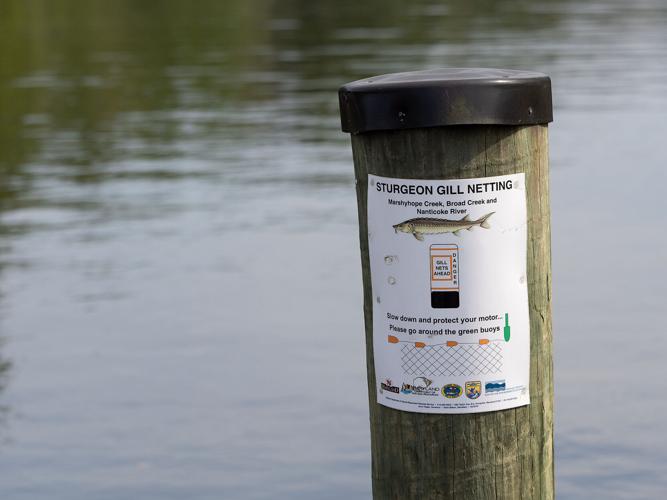 A poster warns boaters to stay clear of gill nets placed in Marshyhope Creek near Federalsburg, MD, that researchers use to catch spawning sturgeon.

A Norwegian company will have to overcome a flood of skepticism in its bid to build a large, indoor salmon farm in a small town on Maryland’s Eastern Shore.

To move into the construction phase, the $300 million, 25-acre facility requires a litany of state and federal permits. One of the first and most critical is a wastewater discharge permit that could allow the factory to release up to 2.3 million gallons a day of treated “purge” water into Marshyhope Creek, one of the Chesapeake Bay’s least degraded headwaters.

The Maryland Department of the Environment gave preliminary approval to the discharge permit in June. More than 100 people crowded into Federalsburg’s town hall Aug. 10 for a hearing hosted by the agency to gather public feedback about the pending decision. Two dozen of them spoke — all but one in opposition.

They were concerned about several potential consequences, from fouling the air with fishy odors to giving a green light for the operation’s effluent to overload the Marshyhope with water-fouling nitrogen. But the main worry, by far, was for a long fish with bony scutes, so rare in the Chesapeake and its rivers that not long ago it was believed to have been wiped out from the region.

A little more than a decade ago, biologists thought that declining water quality had driven Atlantic sturgeons out of the Bay. But recent research confirms that spawning populations of the federally endangered species cling to life in the James and the Pamunkey rivers in Virginia as well as the Marshyhope in Maryland.

The size of the Maryland population is perilously small — probably only about 29 adults, said Dave Secor, a fisheries ecologist with the University of Maryland Center for Environmental Science. A major disturbance, such as the discharges envisioned in the MDE permit, could upend the fragile balance of water temperature and salinity that sturgeons require for successful reproduction, he told regulators at the meeting.

AquaCon wants to produce up to 15,000 metric tons of salmon a year at the Federalsburg facility. It’s part of the company’s $1 billion plan to construct three land-based salmon farms on the Eastern Shore.

The company plans to use a recirculating aquaculture system. The fish will be raised in a series of large indoor tanks filled with water from wells. That water will be almost entirely recycled, with fish waste filtered out and converted to methane to supply energy for the operation.

The aquaculture facility would discharge a portion of its wastewater into Marshyhope Creek, a tributary of the Nanticoke River that winds mostly past bucolic scenes of forests and marsh. The effluent will be from tanks used to “polish” the salmon before harvest. That process purges the salmon of the bacteria that often tarnish farm-raised fish meat with a muddy flavor. The bacteria, known as geosmin, are naturally occurring, the company says, adding that the water will be disinfected before it’s released.

The purge water won’t go directly into the Marshyhope. It will be sent first though a riprap-lined channel and into a constructed wetland to disperse the flow into the creek, according to the permit’s fact sheet.

AquaCon estimates that up to 15% of the Marshyhope’s flow at the outfall would consist of discharges from its facility.

A handful of companies have bet on the new technologies to raise salmon on such a scale in the United States in recent years. Success could prove lucrative. Salmon are Americans’ second favorite seafood, after shrimp. Most of the more than 2.5 pounds each person consumes annually comes from aquaculture operations in Norway, Chile, Scotland and Canada.

But sturgeon shouldn’t have to pay the price for AquaCon’s gain, several residents and marine life experts said at the MDE hearing. Some pointed to the uneven operating record of similar land-based factories in Europe, notably a September 2021 fire at an Atlantic Sapphire facility in Denmark that led to a $25 million insurance payout.

“It is essentially a large experiment on a small creek,” said Brad Stevens, a retired marine science professor at the University of Maryland Eastern Shore.

Representatives of several environmental groups — the Chesapeake Bay Foundation, Friends of the Nanticoke River, ShoreRivers and Wicomico Environmental Trust — were unanimous in their opposition to the project.

Matt Pluta of ShoreRivers said the factory’s planned nutrient inputs into the Marshyhope are unacceptable. “When was the last time anyone has seen a salmon in the Chesapeake Bay?” he asked. “Not ever. We look for your investments in our fisheries and our crabs, but not in salmon.”

The tentative permit allows the plant to discharge up to 5,400 pounds of nitrogen a year into the creek, putting the creek 700 pounds above its “total maximum daily load” for achieving better water quality in the Bay. The document suggests that AquaCon engage in nutrient trading — buying credits from entities that discharge pollutants at levels below their allotted loads — to offset the difference.

AquaCon has told MDE officials that it plans to work with Federalsburg and its wastewater plant to generate those offsets. The agency also wants the company to lower its nitrogen loads 33% by the second year of the permit to help meet the state’s goal for reducing pollution from industrial facilities, which is part of its latest plan for restoring the Bay’s health.

Several AquaCon representatives looked on as the public lambasted their project at the Federalsburg hearing but none addressed the audience. The company’s Easton-based attorney, Ryan Showalter, didn’t respond to questions submitted by a Bay Journal reporter.

The lone supporter at the hearing was Yonathan Zohar, director of the Aquaculture Research Center at the University System of Maryland’s Institute of Marine and Environmental Technology. AquaCon’s website describes him as an adviser on the fish-rearing technology the company plans to use.

Zohar, agreeing that the location is a “sensitive place,” vowed that the final permit will ensure that the Marshyhope’s ecosystem doesn’t deteriorate. “There are challenges,” he added. “We’re addressing them.”

The proposed Salmon Factory would be an unfortunate land use and environmental decision for land that discharges into a tributary of the Bay. More appropriate land uses could be found that release less than 5,400 lbs (2.7 tons) of Nitrogen per year into the Bay.

The current load of Nitrogen in the Bay is causing a huge “dead zone” extending from the Potomac to the Bay bridge; approximately 400 sq. miles. A goal of the bay recovery is to reduce this Nitrogen load with metrics controlling allowable daily maximum load (ADML). The proposed land use decision allowing an increase of 5,400 lbs. is moving in the wrong direction. In addition, AquaCon proposes nutrient trading to meet its’ ADML limits. Swapping credits from a facility that is exceeding the requirements seems to say that the goal is for all facilities to maximize the permitted Nitrogen load, or sell the excess to others rather than contributing the “excess N credits” to restoring the Bay.

What is the value of 5,400 lbs of Nitrogen removal to the Bay environment? In my Fairfax County subdivision, the County renovated an existing Storm Water Management facility that was built and approved 20 years ago and was still functioning as designed. According to my conversations with County staff, and a letter sent to home owners, the cost would be $500,000, and the goal was to remove 25 lbs. of Nitrogen (I assume per year). This equates to $20,000/lb., and if spread over the 20-year life of the facility would remove 500 lbs. of N (20 yrs. X 25 lbs.) at a cost of $1,000/lb. Fairfax County was meeting its ADML at a very high cost! This effort would be cancelled out by the 5,400 lbs. added to the Chesapeake Watershed by AquaCon!!

Have we learned nothing from Valley Protein?