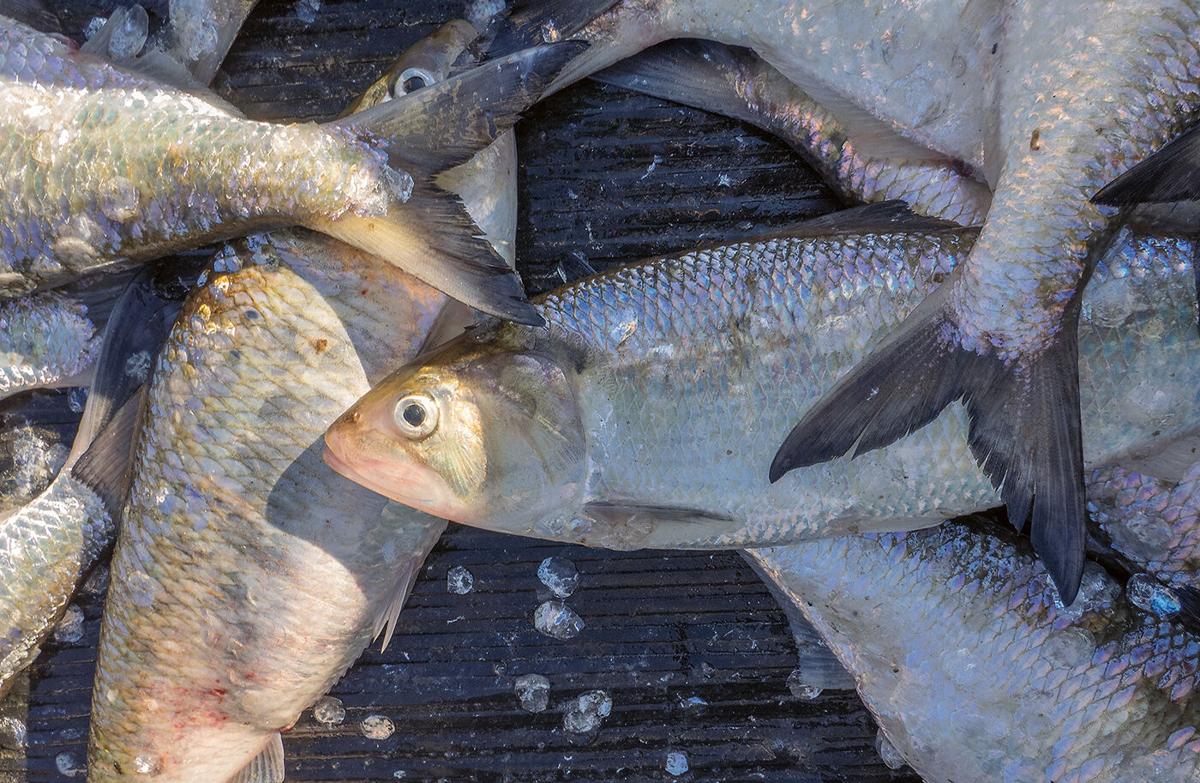 These American shad were caught in 2014 using a gill net in the Pamunkey River, a tributary to the York River in Virginia. 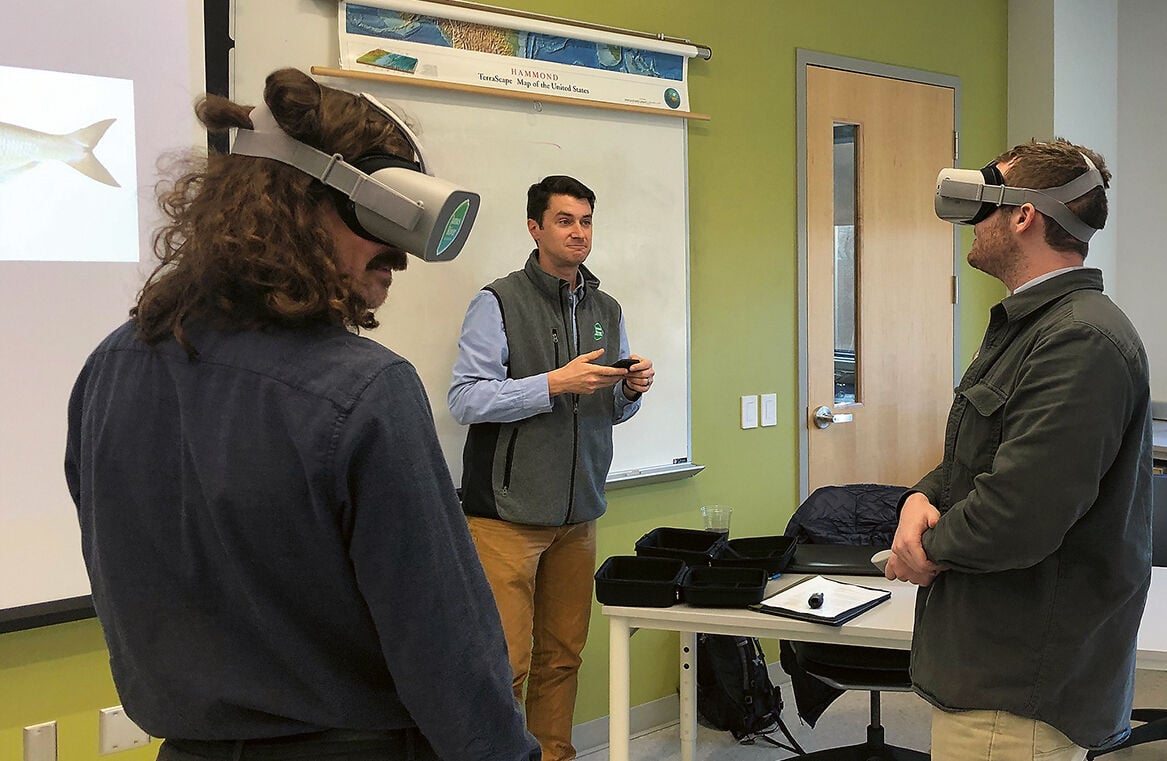 James Riverkeeper Jamie Brunkow (center) asked a group of students at Randolph-Macon College earlier this year to study why American shad weren’t making a comeback in the river. The organization’s virtual reality goggles helped the students envision a future waterway that is cleaner — and perhaps has more shad than it does now. (Charles Gowan / James River Association) 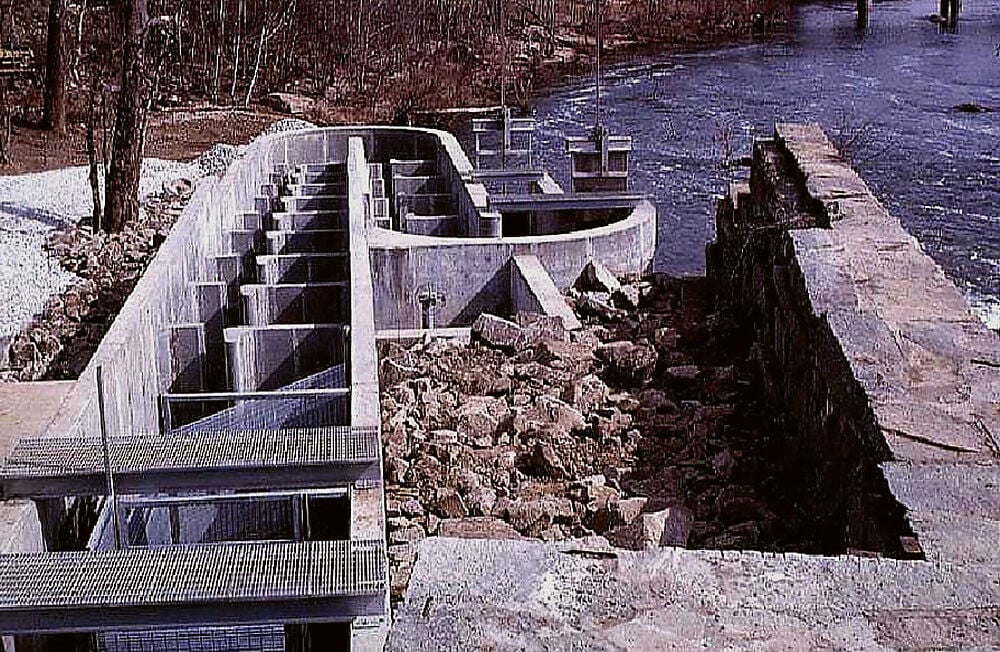 This fish passage at Bosher’s Dam was designed to convey American shad to the upper reaches of the James River beyond Richmond where they once spawned. (Courtesy of James River Association)

A pair of professors at Randolph-Macon College near Richmond likes to challenge their students with real-world problems. When they asked the James River Association what puzzle they should task a class of environmental studies majors with solving, Riverkeeper Jamie Brunkow pointed to the near absence of American shad in the river.

“It’s a real example where the experts don’t know what’s going on,” James Brunkow said. “It’s a bit of an environmental mystery.”

Brunkow said shad jumped to the top of his organization’s list of concerns while working on the 2019 State of the James report. Nearly every other measurement of water and wildlife health seemed to be improving, except the population of American shad, which came in at 1% of the goal the group had set for the species.

The declining number of shad is not a new concern for local river groups — or for scientists across the Chesapeake Bay region and the entire Atlantic Coast.

All along the coast, shad populations have been idling at a historic low, despite millions of dollars invested in their restoration.

A recent study by the Atlantic States Marine Fisheries Commission calls the shad population “depleted” from Maine to Florida. In the Bay region, the Rappahannock and York rivers fare slightly better with a death rate described as “sustainable.” But, in the James River, shad numbers have remained stubbornly low despite decades of effort focused on their revival.

Fishery authorities began taking the major steps decades ago that should have helped shad rebound in the region — but to little avail.

A state moratorium on the inland harvest of shad has been in place since 1994 to curb overfishing. Also in the early ’90s, the Virginia Department of Game and Inland Fisheries (now the Department of Wildlife Resources) began stocking shad in the upper James River system to encourage them to repopulate historic spawning grounds.

By placing millions of shad fry each year into the river just upstream of Bosher’s Dam, the hope was that the fish would return to that location as adults to mate. In 1999, the department opened a fish passage system at Bosher’s Dam intended to deliver shad to that location and also to open up more than 100 additional miles of river that had been blocked to spawning for decades.

But the fish still aren’t taking hold in the James.

In 2003, the fishway passed close to 1,000 American shad. In recent years, the passage saw a few dozen fish go through and, in 2019, the cameras counted one American shad making the trek.

“I always tell people, ‘You can’t pass what isn’t there,’” said Alan Weaver, fish passage coordinator for the Virginia Department of Wildlife. “When there were more fish in the river, we would see more fish in the fishway.”

State and federal agencies that had been pouring funds into shad stocking programs couldn’t ignore the dismal results anymore. Virginia ended its stocking program near Bosher’s Dam in 2017. Were stocking to begin again, it would be because a group of scientists, biologists, fishery managers and others that make up the Virginia Alosine Taskforce recommend stocking as a viable management strategy for restoration.

But, at least in the James River, there is work to be done first. That’s the assumption many organizations involved in shad restoration have made after pouring fish for years into a system that didn’t seem to be reproducing them at the rate it should have. And the Randloph-Macon students, after spending a semester studying shad setbacks, agreed.

Under nearly every rock the environmental problem-solvers turned, they found another steep obstacle facing the fish that were once so plentiful that they sustained early settlers along the James River.

“A lot of students thought we’d find one piece of evidence that has to be what’s causing the problem,” said Brycen Boettcher, a student in the spring class who now works as a fisheries technician at the Virginia Department of Wildlife Resources. “But it’s more than just one simple thing causing a decrease in the whole population.”

The students found that nearly every major problem facing American shad in the James River was enough to keep the fish dying faster than they can reproduce.

They looked at the estimated population of shad in the river and started subtracting: How many juvenile fish are sucked into the water intake system of a power plant? Eaten by blue catfish before they make it back to their spawning grounds? Caught as bycatch in the ocean before they even begin their inland run?

Often, the students ran out of fish before the exercise was over. But it demonstrated that any one of these factors could be suppressing the population enough that stocking new fry into the river seems like little more than putting a band-aid on a gaping wound.

“Everyone’s always looking for the smoking gun: What’s the one thing you could change to make it better? And I think it’s really death by a thousand cuts,” Weaver said. “The population of American shad was so low when we started [restoration efforts] in the 1990s. Even though the fish is a prolific spawner, there are so many things that are more difficult than what they faced before.”

Professors Mike Fenster and Charles Gowan, who co-taught the problem-solving class at Randolph-Macon, say the goal of their real-world investigations is to let the students dive into a complex environmental problem and emerge with priority areas for their “client,” in this case the James River Association, to address.

“There are so many threats that the strategy really becomes figuring out what to tackle first,” Fenster said. “That really has to be about where you can get the biggest bang for your buck.”

In their reports, the students pointed to many of the factors that the James River Association has been working on for decades, and to some that it could do more to address. Poor water quality plays a part, particularly when too much sediment in the water prevents underwater grasses, a key habitat for shad, from thriving. The nonnative and voracious blue catfish that fill the James River also play a large role, as they feast on juvenile shad, but they are well-established now and seem impossible to eradicate.

The data also began to suggest that the large water withdrawals and intake systems of power plants could be one of the factors causing shad to fare worse in the James than in other Chesapeake Bay rivers. Dominion Energy’s Surry and Chesterfield power stations each withdraw millions of gallons of water from the James.

Each of these withdrawal systems is subject to a permit process that is occasionally up for renewal and scrutiny. After reviewing current state standards, the students said that both facilities could improve their water intake systems to align with current state standards to reduce the number of fish drawn in with the water. The river association is already involved in the water withdrawal permit process for one of those plants and poised to participate in the other when it begins.

In 2015, the Chesterfield station found two dead Atlantic sturgeon larvae and one adult sturgeon in its water intake system, which triggered a lengthy federal process intended to protect the endangered species. The station is seeking an “incidental take” permit from the National Marine Fisheries Service that would allow it to continue operating despite a potential impact to the endangered fish, a process that could require changes to the water intake system that could also benefit shad.

Another step that might to help the James’ shad population is to improve fish passage at one of the four dams along the river or remove some of the dams entirely. The students suggested that dam removal, while costly, could benefit from a new windfall of public approval nationwide for such projects and from the river’s increased use by paddle sports enthusiasts. And technological improvements to existing fish passages could give more fish a chance to spawn.

Other factors that could keep shad from rebounding involve coastal challenges. Fisheries experts continue to be concerned about the amount of American shad being harvested as bycatch in the ocean. And there are also a host of other impediments as the fish make their way from inland rivers to overwintering in Canada’s Bay of Fundy.

Erin Reilly, staff scientist at the James River Association, hopes the shad’s story in the James will one day be like that of the river herring or the sturgeon: a species back from the brink after decades of painstaking work. She pointed out that the population of anadromous fish species, which swim upriver to spawn each year, can ebb and flow dramatically; a good spawning year can lay the foundation for a rebound a few years later.

The end of shad stocking is likely to cause more dramatic declines for a few years, “but we haven’t given up on them,” Weaver said.

“I have no idea what the future is,” he said. “It’s not as bad as it was when we started this work, but we’re not where we hoped to be 20 years into it.”