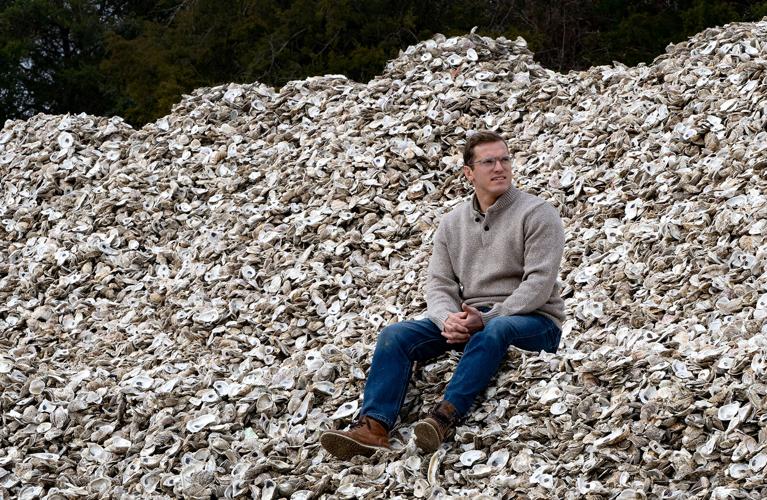 Matthew Gray, a scientist at the University of Maryland Center for Environmental Science, sits on a huge pile of oyster shells at the center’s Horn Point Laboratory. 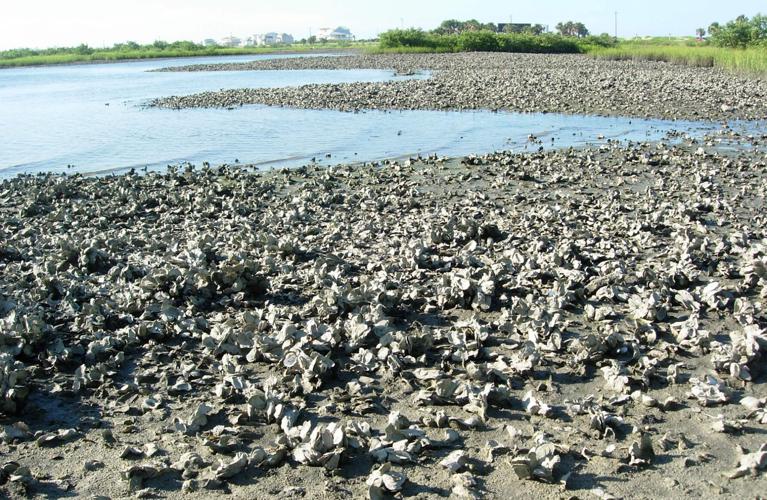 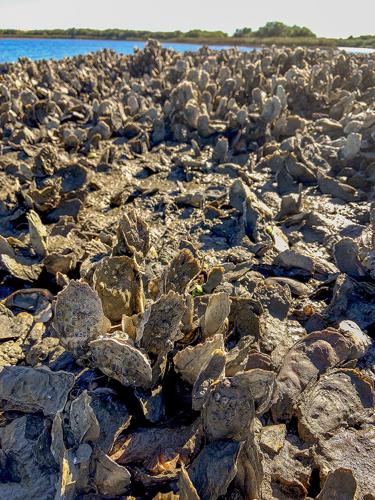 Can restoring oysters in the Chesapeake Bay and its rivers really help clean up polluted waters?

For many engaged in the struggle to save North America’s largest estuary, it’s an article of faith to answer that question with a resounding yes. Maryland, Virginia and the federal government have invested $76 million so far in trying to rebuild and repopulate oyster reefs in just six of the Bay’s tributaries.

But with oyster populations worldwide much diminished, real-world evidence has been lacking to support the belief that restoring shellfish abundance will greatly benefit water quality — until now.

A research team led by the University of Maryland Center for Environmental Science has found a place along Florida’s Atlantic coast, near St. Augustine, where oysters grow so thickly that they resemble what Capt. John Smith and other European settlers reported finding in the Chesapeake Bay in the early 1600s.

Close analysis of the number and density of oysters in Florida’s Guana, Tolomato and Matanzas rivers and the locations of their reefs indicates that the bivalve population there filters 60% of the water in that small, somewhat protected system in a little less than two weeks’ time, researchers concluded.

“If you were to restore oysters to historic levels, this is the affect they would have,” said Matthew Gray, an oyster researcher at UMCES’ Horn Point Laboratory. He is lead author of the study, published in November in the journal Estuaries and Coasts.

It’s been more than three decades since Roger Newell, another oyster biologist at Horn Point, now retired, stirred imaginations by estimating that the Bay’s oysters had been so plentiful before 1880 that they could filter all of the estuary’s water in less than a week. His study and other similar ones helped inspire efforts to restore the Chesapeake region’s bivalve population, now thought to be just one or 2% of historic levels.

For Gray, the Florida study provides some contemporary evidence of the role oysters can play in water quality.

Gray had been quoted in a 2020 Bay Journal story puncturing the oft-repeated claim that an oyster can filter up to 50 gallons of water per day. While maybe true under ideal conditions in a lab, he said, studies indicate individual oysters in the wild siphon water through their gills at a far lower rate: 3 to 12.5 gallons per day.

That news story, which Gray likened to “popping somebody’s bubble,” bothered some Bay advocates, who feared it would undermine public support for oyster restoration.

After the story appeared, Gray said, another oyster researcher contacted him and suggested taking a look at the densely populated reefs in the Guana Tolomato Matanzas National Estuarine Research Reserve. The reserve protects 76,760 acres of land, reefs and water along nearly 40 miles of the Atlantic coast between Jacksonville and St. Augustine.

“I’ve been going [there] and looking at those reefs for quite a long time and trying to get other people interested,” said Raymond Grizzle, research professor of biology at the University of New Hampshire, who grew up in Florida.

So, Gray and Grizzle teamed up with some Florida scientists to study the oyster community there and try to quantify its impact on water quality. They found that, collectively, those oysters can do a great deal, even though they each filtered a little less than 16 gallons per day, on average.

“Oysters each may not filter up to 50 gallons of water daily,” Gray said, “but if there are enough of them out there, meaning a whole lot, they can clean up the water.”

They don’t need to carpet the bottom of the estuary, either. In the Florida reserve, the oysters, many on intertidal reefs along the shore, cover only about 4% of the bottom area.

But their extent didn’t matter as much as their density and location, the study found. In the reserve, they were clumped together on reefs at an average density of 1,855 oysters per square meter. That’s greater than what’s typically found on harvestable reefs in the Chesapeake. Filtration rates varied around the estuary but were highest where water flowed over more than one reef before sloshing out into the ocean.

There are differences, clearly, between the two estuaries. The Chesapeake has a 64,000-square-mile watershed, while the drainage basin of the three Florida rivers is tiny fraction of that — about 200 square miles. The water is warmer year-round in Florida, giving those oysters more opportunities to feed by filtering algae from the water.

And unlike in the Bay, there’s little harvesting of the reserve’s oysters; they face a different threat - frequent boat wakes pounding the intertidal reefs.

But the study’s findings nevertheless offer tips to those hoping that a restored oyster population will help clean up the Bay, Gray said.

The mean density of oysters on reefs in the Florida reserve, he pointed out, is vastly higher than the 50-per-square-meter goal set for the efforts under way to restore oyster reefs in 10 of the Chesapeake’s tributaries. Fishery managers might also want to take a cue from the study to focus restoration efforts on reefs located where the science shows they could do the most filtration.

“To have really meaningful water quality improvements,” he said, “you need to have really dense populations of oysters, and they need to be placed in the right spots.”

The study also sends a message to Floridians, said Jen Lomberk, the Matanzas Riverkeeper. That river, which flows through St. Augustine and makes up the lower portion of the estuary, is “a lot cleaner” than some other Florida rivers, she said, but there’s no guarantee it will stay that way.

“I’m hoping that’s going to be a powerful tool toward getting more conservation efforts in this area,” Lomberk said. “If we want it to stay as clean as it is here, there are some changes that are going to need to be made.”