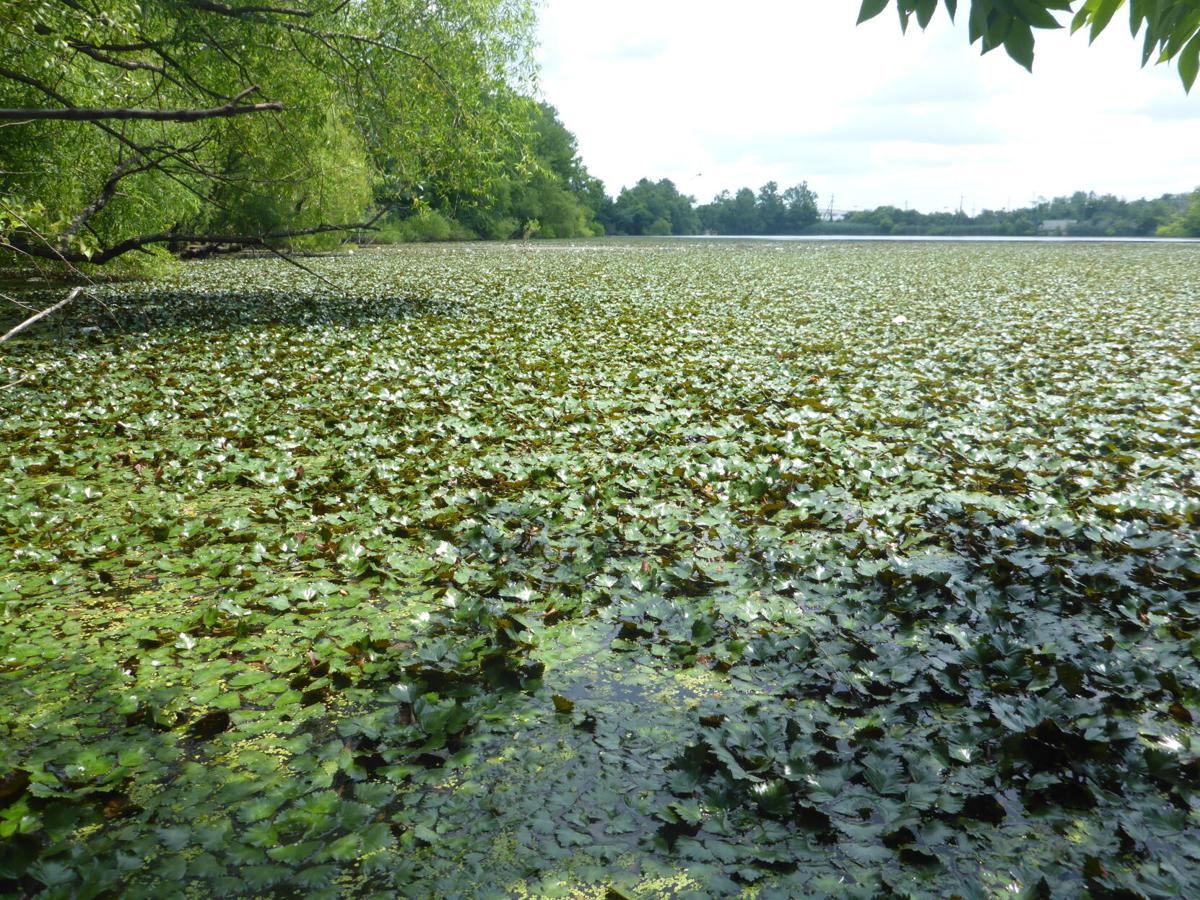 An invasive species of water chestnut covers the surface of a lake in Fairfax County, VA. (Nancy Rybicki) 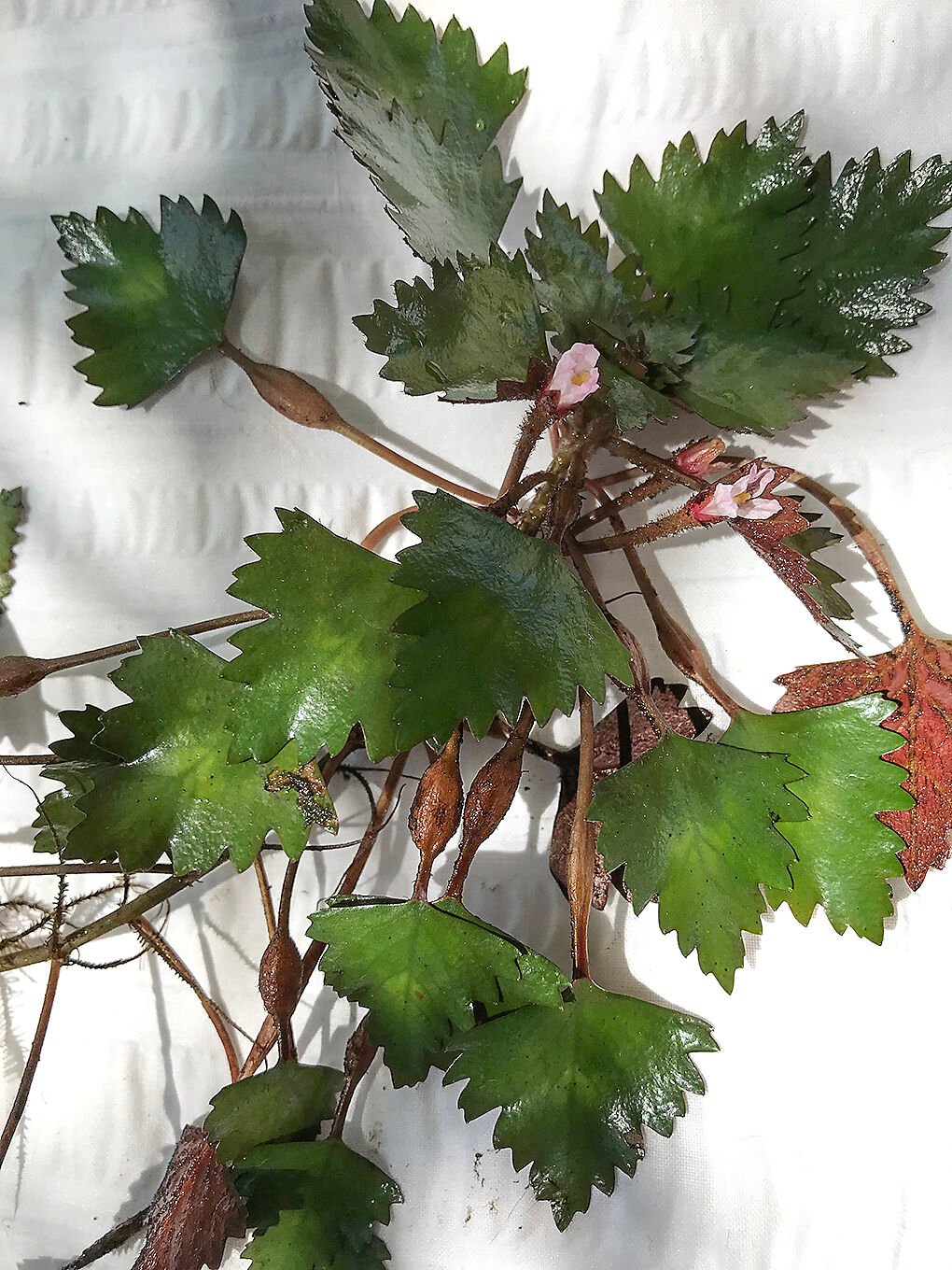 This invasive species of water chestnut, Trapa bispinosa, is spreading through streams in Virginia’s portion of the Potomac River watershed. (Nancy Rybicki) 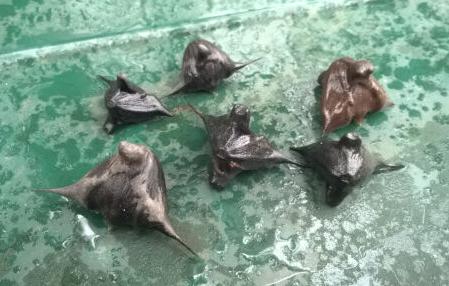 It springs to life each year in freshwater ponds and lakes as temperatures rise. By the middle of summer, the foliage is so thick and bushy at the surface that the water below is plunged into darkness, with hardly any oxygen seeping in from the air above.

Across Northern Virginia, the invasive aquatic plant has spread to dozens of locations, according to state and federal scientists. It looks a lot like Trapa natans, the water chestnut that has blanketed waterways on Maryland’s Upper Shore and the Northeast United States, but it isn’t.

It’s a different type of water chestnut: Trapa bispinosa. And Northern Virginia is the first place it has been found growing in the country.

Biologists want to keep it that way.

If eradication efforts don’t ramp up soon, though, they warn that the species could spread beyond its current backwater haunts to the Potomac River and become a much bigger ecological headache. The 400-mile river’s currents could whisk T. bispinosa seeds just about anywhere, dampening hopes of containing the invasive plant, said Nancy Rybicki, a George Mason University professor and retired U.S. Geological Survey aquatic plant ecologist.

“Here, we have a chance to manage it while it’s only in stormwater ponds, farm ponds and homeowners association ponds,” she said. “This horse is not out of the barn.”

The biggest obstacle, Rybicki said, is that no one seems to be in charge of dealing with the problem. There is no management plan to guide its removal and no agency with clear authority to tackle it.

John Odenkirk, a biologist with the Virginia Department of Game and Inland Fisheries, said he began working on the water chestnut infestation a few years ago even though controlling aquatic plants falls outside of department’s mission.

“We took it upon ourselves because we realized it could be an issue and it could be linked to habitat for fish,” Odenkirk said. Other agencies, such as the state agricultural and environmental divisions, have a regulatory stake in it, he added, “but it’s unclear who has the authority to deal with nonnative aquatic plants.”

He was the first to spot it in Virginia. Odenkirk said he was working in Pohick Bay along the Potomac in Fairfax County in 2014 when he saw a patch of vegetation he didn’t recognize. He called Rybicki. Both agreed that it resembled water chestnut. But that species had been driven out of the Potomac at great expense and effort by the U.S. Army Corps of Engineers in the 1950s.

The new plant also exhibited subtle differences from T. natans. Their leaves share the same serrated pattern, but the underside of T. natans is light green, not red like what Odenkirk had discovered. T. natans has white flowers; these new ones are pink. The seed pods differ as well, with four hooklike horns on T. natans vs. two on the new plant.

By 2019, after scouring resources from around the world and sequencing the plant’s DNA, Rybicki arrived at an identification: a variant of water chestnut native to Taiwan.

How did it get to Virginia? Rybicki can only speculate.

Botanical records suggest that T. bispinosa arrived in the Potomac watershed as early as 1995 in Westmoreland and Stafford counties, her investigation found. Perhaps someone planted it in their own pond, and it escaped. The hooks on the seed pods can become attached to waterfowl feathers or a boat’s anchor line — and off they go.

Rybicki’s surveys have sighted T. bispinosa in 54 locations across five counties, all of them in Virginia within the Potomac River watershed. Some have been successfully knocked down by using herbicides or simply being yanked out by hand. But 31 sites remain “active,” putting more than 500 water bodies within a 3-kilometer radius of the outbreaks at risk of infestation, according to Rybicki’s research.

“Basically, she and I are the team so far,” he said. “I just don’t have time to manage this. It’s going to take somebody almost full-time, 40 hours a week for a year, year and a half, and building a [volunteer] network to take care of it.”