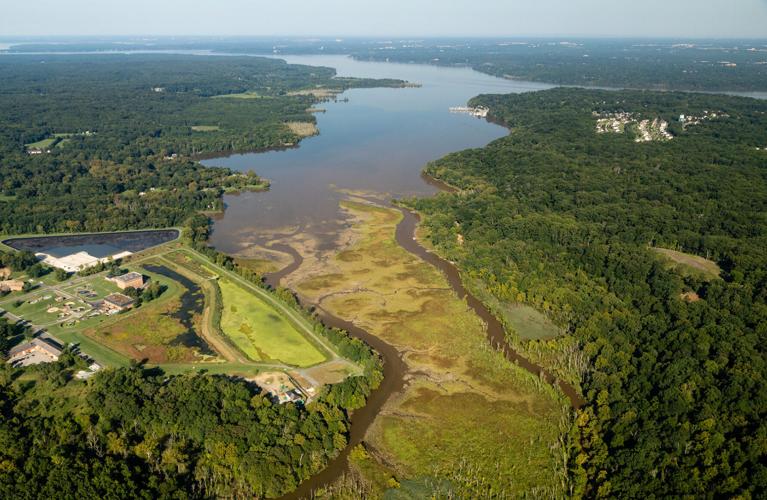 The Maryland Department of the Environment has issued a fish consumption advisory for Piscataway Creek, shown here, because it found high levels of PFAS or ‘forever chemicals’ in the tissue of three fish species. (Will Parson/Chesapeake Bay Program) 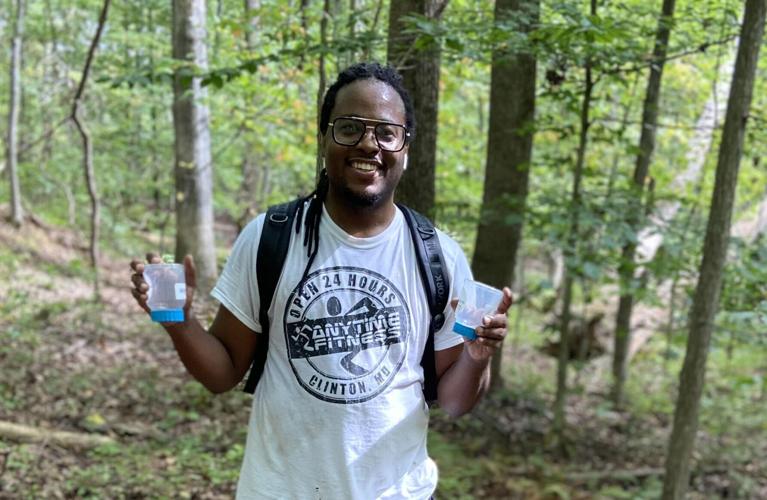 Sherman Hardy holds water samples that he and activist Pat Elder collected from Piscataway Creek, a Potomac River tributary contaminated with PFAS. “What are you going to do about those tests?” he asked in letters to state and local officials. “What’s going to come from it?” (Pat Elder) 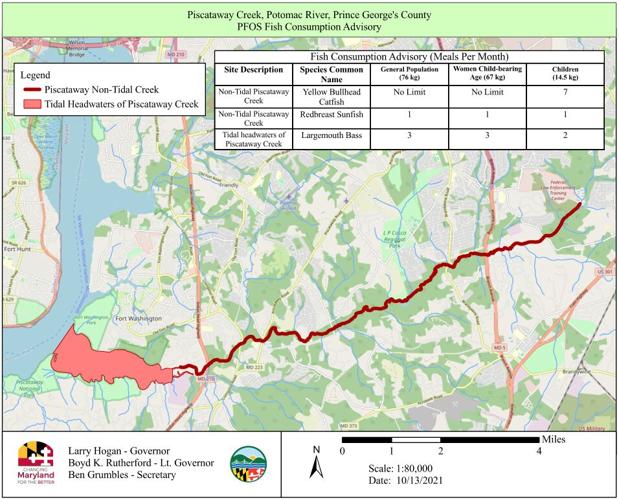 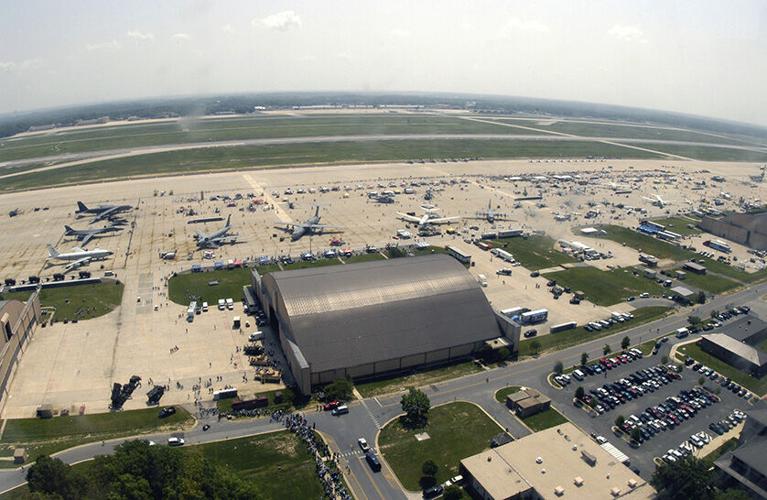 Aerial view of Joint Base Andrews taken during a 2004 air show. The Pentagon previously reported high PFAS levels, most likely from spraying firefighting foam, in soil and groundwater and in surface water on and near the base. (PH2 Daniel Mclain, USN)

Anglers who fish Piscataway Creek off the Potomac River are being warned to limit their consumption of what they catch after Maryland regulators discovered elevated levels of so-called “forever chemicals” in fish downstream of Joint Base Andrews, an air base in Prince George’s County.

The Oct. 15 announcement from the Maryland Department of the Environment announcement is the first official warning issued anywhere in the Chesapeake Bay watershed for fish containing unsafe levels of per- and polyfluoroalkyl substances, or PFAS. But one expert said he expects more, given the amount of contamination found so far throughout the region.

PFAS are a group of thousands of synthetic chemicals that have been used since the 1940s in a wide variety of products, including firefighting foams. They persist in the environment and can build up in the blood and tissue of fish and people. Studies have found evidence that exposure to certain PFAS compounds increases risks of cancer and damage to the liver, thyroid and immune system. Infants and children may also be at risk of developmental problems.

The MDE recommended that adults eat no more than one meal a month of redbreast sunfish and three meals monthly of largemouth bass caught in Piscataway Creek. Children, who are more vulnerable to toxic exposures, should consume even less bass, the state agency advised, and eat no more than seven monthly portions of a third fish, yellow bullhead catfish.

Greg Allen, chair of the toxic contaminants workgroup of the Chesapeake Bay Program, said he was “not terribly surprised” by the MDE advisory. PFAS has been detected in soil and groundwater at nine military facilities in Maryland and at multiple other sites, both military and civilian, around the Bay watershed.

Testing by the MDE and by others has detected PFAS in fish and shellfish from around Maryland, including in Antietam Creek farther up the Potomac and in southern Maryland waters. Allen said he expects more warnings about eating PFAS-contaminated fish in the future, particularly on the Western Shore of the Bay, where more facilities have been identified as having handled PFAS.

The Piscataway advisory stems from an investigation begun after a July 2020 fish kill in the creek that was tied to a “release” of firefighting foam at the air base, according to an MDE report. A 2018 site investigation by the Pentagon also had detected “relatively high levels” of two PFAS compounds used in firefighting foams — perfluorooctane sulfonate, or PFOS, and perfluorooctanoic acid, or PFOA — in surface water and stormwater on or near the base, the MDE report said.

The fish consumption advisory was welcomed by Sherman Hardy, a resident of nearby Clinton who was so concerned about PFAS contamination from Andrews that he tested the creek’s water himself last month. He called the state announcement “awesome” news but wants more to be done. He contended that government at all levels has been slow to tackle the environmental health threats posed by PFAS, in this case putting at risk the predominantly African American communities surrounding the base. Hardy, who is Black, said it raises questions of environmental racism.

“Why [aren’t] the state and the county doing enough to protect the citizens?” he asked. “Are they turning a blind eye, or are they uneducated on it?”

To test the creek’s water, Hardy said he connected with Pat Elder, an environmental activist from St. Mary’s County who has been researching and publicizing PFAS contamination in the region. The two traipsed through woods and briars to sample just downstream of the base, and a private lab detected nearly 2,800 parts per trillion combined of several PFAS compounds.

That’s on par with what the MDE found last fall, according to its recent report. The agency said it detected a maximum PFAS concentration of 3,100 parts per trillion in the upper nontidal waters of the Piscataway, not far from the air base. It reported a much lower concentration of 207 parts per trillion in the tidal lower creek. Neither, according to the MDE, is considered high enough to cause concern for people wading or swimming in the creek.

After getting his own Piscataway water test results last month, Hardy said he wrote local and state officials calling on them to “investigate, remediate and regulate.”

“Neither the county nor the state have set limits on the concentrations of these chemicals in surface water,” he wrote. “Shouldn’t we do so?” He said he’s only heard back from a few officials so far.

A spokesperson for the Air Force wing that operates out of Joint Base Andrews, said the service “is committed to identifying and addressing environmental impacts from perfluorooctane sulfonate (PFOS) and perfluorooctanoic acid (PFOA) to communities surrounding our installations.”  The Air Force has barred training with PFAS-containing firefighting foam, the spokesperson said, and has “begun to treat uncontained releases of [foam] as if it were a hazardous material spill and require immediate cleanup.”

State officials say they’re carrying out a “science-based, comprehensive plan” for addressing PFAS, focusing on contaminated sites where people are exposed to unacceptable health risks and where PFAS may still be getting into the environment.

“Maryland is committed to reducing the risks of PFAS chemicals in our state and continuing our close coordination with scientific, local, state and federal partners,” MDE Secretary Ben Grumbles said in a press release. “Our focus on PFAS in fish tissue and the resulting consumption advisory is another step forward in understanding, communicating, and reducing the potential for harm.”

Concern over PFAS has been building for nearly two decades amid growing discoveries of its presence in community and private wells. There are no enforceable federal standards limiting how much is safe to consume in drinking water, though the U.S. Environmental Protection Agency in 2016 set a health advisory level of 70 parts per trillion combined for PFOS and PFOA, the two most studied compounds. Surveys conducted by Pennsylvania and Maryland since 2019 found at least some PFAS in a large percentage of water systems checked statewide, though levels exceeded the EPA recommendation in only two systems in each state.

Maryland has opted to leave such regulation to the federal government, but other states have set their own PFAS limits or guidelines in drinking water. Pennsylvania is in the process of doing so.

And after years of study, the EPA has pledged to set an enforceable limit on PFOA and PFOS in drinking water by the end of 2022. The agency also released a “strategic roadmap” on Oct. 18 calling for more testing, research and reporting of PFAS uses, while regulating entire groups of compounds, rather than individual chemicals. That plan has drawn praise from some environmental groups, but others have criticized it as weak.

The effort to check fish for PFAS contamination is growing. In 2020, the MDE tested surface water and oysters in St. Mary’s County after the Naval Air Station Patuxent River there disclosed high levels of the chemicals in its soil and ground water. This year, disclosure of PFAS in creeks flowing off the Naval Research Laboratory Chesapeake Bay Detachment in Calvert County prompted the nearby town of Chesapeake Beach to check fish offshore. But the MDE said the levels of chemicals found in those fish weren’t high enough to pose health risks under normal consumption scenarios.

The MDE began looking more broadly for PFAS in fish tissue last fall as part of its regular fish contamination monitoring effort. Testing of fish caught last fall at several locations on the Eastern Shore — the Chester, Choptank, Corsica, Elk and Wicomico rivers and in the Chesapeake and Isle of Wight bays — found “no levels of concern.”

Now, after the need to issue a fish consumption advisory for Piscataway Creek, the MDE said it plans to expand its sampling in the Potomac area through next fall. Regulators also are looking to see if there could be additional sources of PFAS in the creek, including a Prince George’s County fire training facility in the vicinity.

At least two other Bay watershed states - New York and Pennsylvania - have issued warnings about eating PFAS-contaminated fish, but not for waterways that drain to the Chesapeake.

Elder, the activist who collaborated with Hardy to test the Piscataway’s water, said he doesn’t believe the fish consumption advisories issued by Maryland or other states are conservative enough to protect people from PFAS, which studies have shown to be harmful at minute levels.

“They are protecting their recreational industries at the expense of public health,” he said.

Hardy, who served a stint in the Air Force as a military policeman, said he’s an avid fisherman and for a time had thought about joining other anglers he’s seen casting lines in the Piscataway.

But are the mercury, PCB and pesticide levels going down in the Chesapeake Bay and its tributaries, specifically the Elk River ?