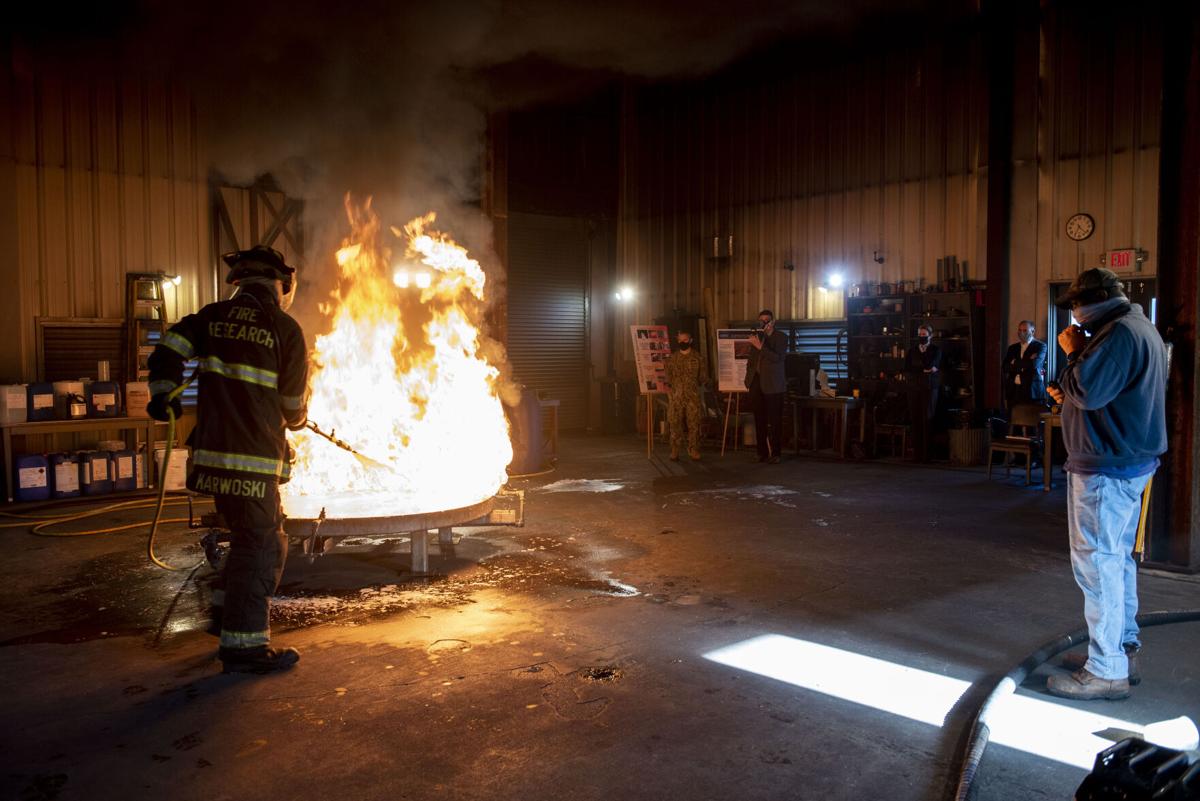 Engineering technician Stanley Karwoski extinguishes a fire during a test at the U.S. Naval Research Laboratory near Chesapeake Beach, MD. The test in 2020 was part of an effort to compare the firefighting performance of foams that don’t contain PFAS and those that do. (U.S. Navy/Jonathan Sunderman) 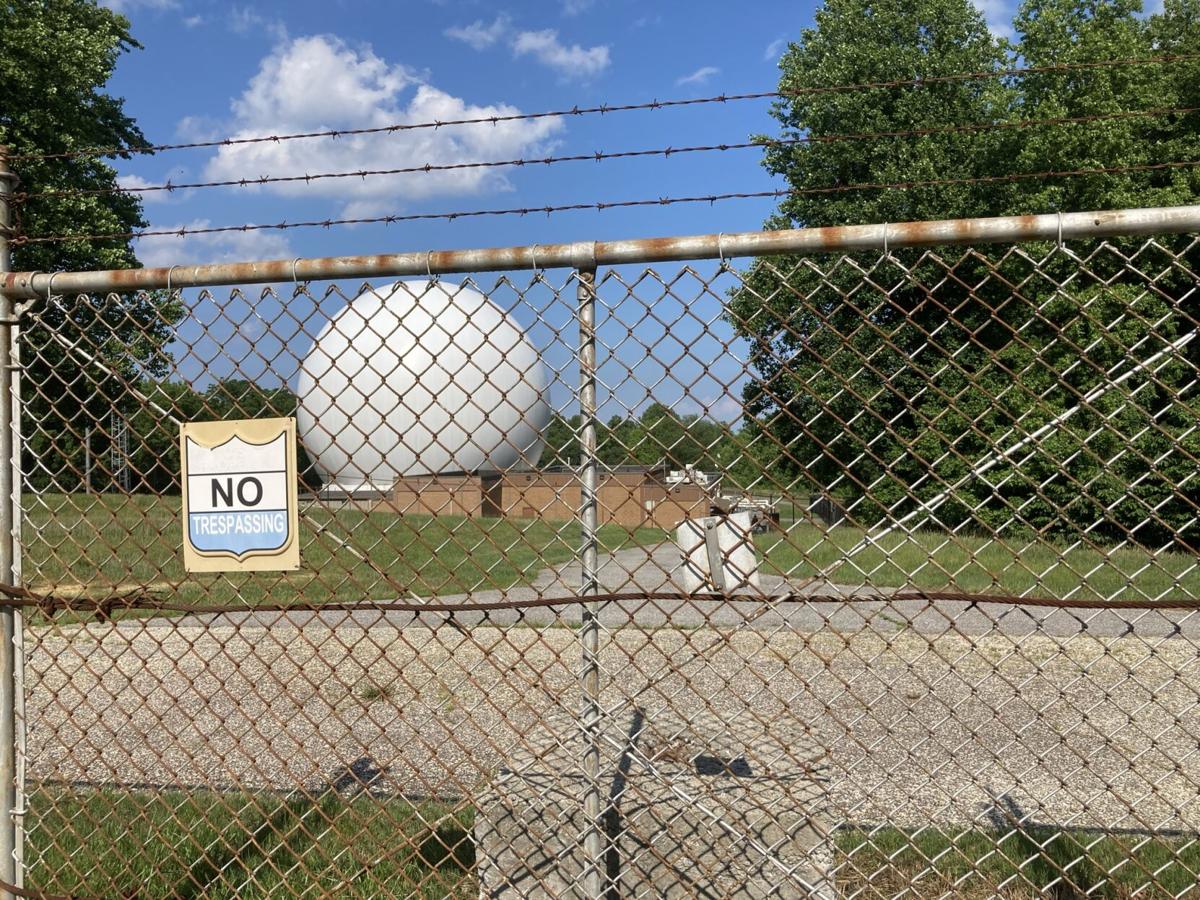 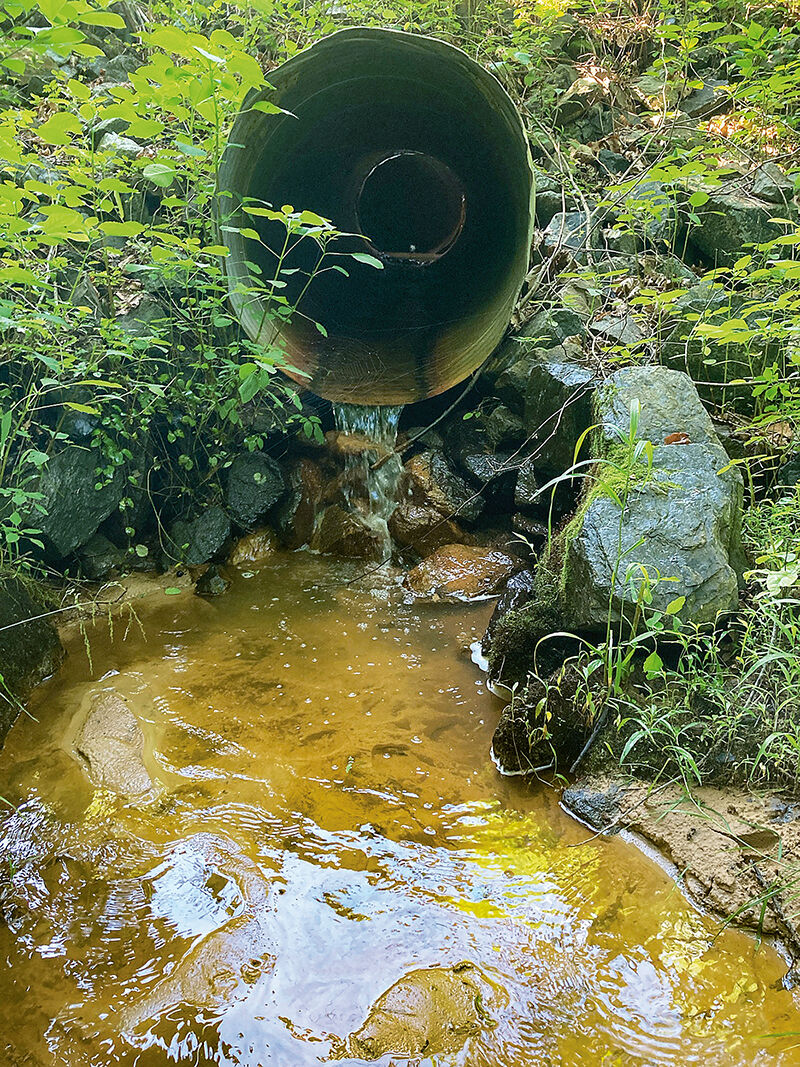 Stream flows from a pipe emerging past the fence line of the U.S. Naval Research Laboratory in Calvert County, MD, onto private property. The Navy reported detecting PFAS in the water upstream of this outfall and at higher levels downstream after it flows back onto lab property before emptying into the Chesapeake Bay. 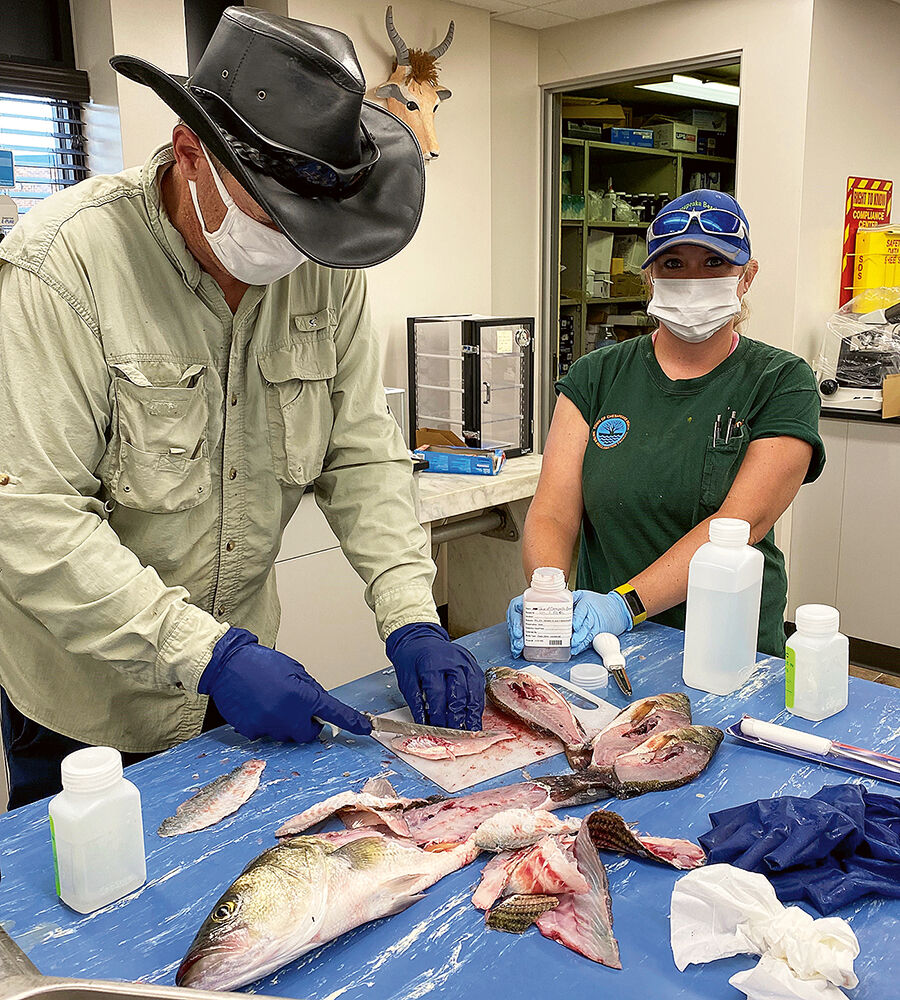 James Berry, public works director for Chesapeake Beach, MD, and Emily Grace, who works at the town’s wastewater treatment plant, fillet fish caught offshore of the Naval Research Laboratory before sending them to an independent lab to be tested for PFAS contamination. (Courtesy of Chesapeake Beach, MD) 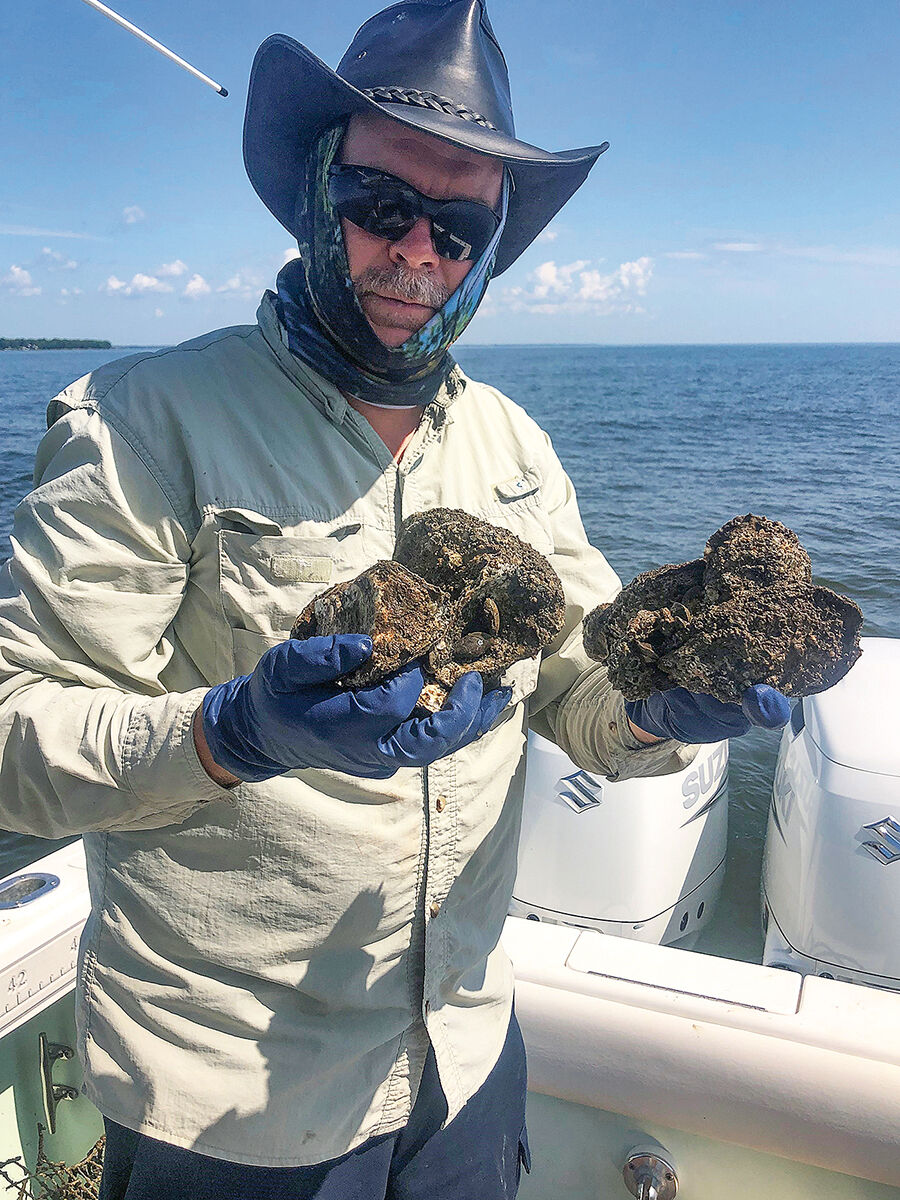 James Berry, public works director for Chesapeake Beach, MD, holds oysters retrieved from a reef that town residents have been restoring. The oyster tissue was sent to an independent lab to be tested for PFAS contamination. (Courtesy of Chesapeake Beach, MD) 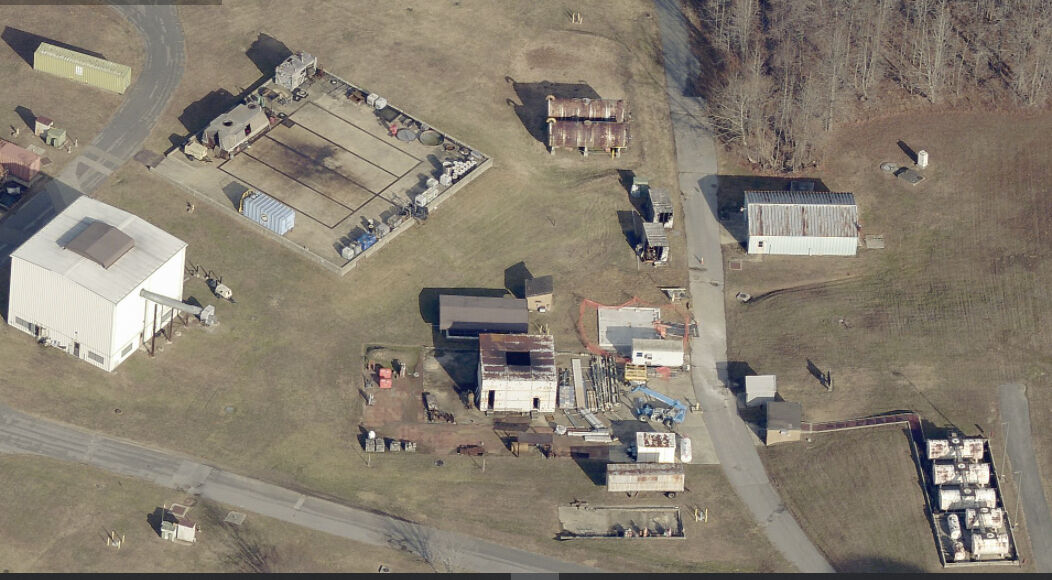 David Harris grew up on a farm next door to the Naval Research Laboratory - Chesapeake Bay Detachment. He recalls camping with his scout troop on the 168-acre base overlooking the Bay and drinking water from the small stream that flows from the Navy property onto his family’s farm.

Until recently, much of what went on at the facility just south of Chesapeake Beach, MD, was a mystery to Harris. But at times in his youth, he said, “big plumes of black smoke” rose over the facility. His mother told him their crops sometimes got a dusting of sooty ash.

Now 50 years old and still living next door, Harris worries about the health risks he and his family may have been exposed to from their military neighbor.

The Navy disclosed recently that it has found high levels of so-called “forever chemicals” in soil, groundwater and streams — not only on the base but beyond its fence line, including in the stream that flows through the Harris farm. Per– and polyfluoroalkyl substances, or PFAS, also have been detected in a few off-base wells, including one that Harris and his family drank from for years.

“I am just freaking out a little bit, having grown up my entire life by the base and now raising my family here on the farm,” he said during a virtual meeting in May at which the Navy disclosed its findings.

It may be hard to picture, but the seemingly quiet lab campus, with its mix of aging Quonset huts and modern radar domes, has some of the worst PFAS contamination of any military installation in the country. It’s earned a mention in the “Filthy Fifty Act,” a bill introduced this summer in the U.S. Senate that would set testing and cleanup deadlines for the most PFAS-contaminated defense sites in the country.

PFAS are a group of more than 9,000 highly persistent chemicals, many of them toxic, which have been in wide use since the 1940s. They are found in everyday consumer products such as nonstick cookware, pizza boxes and stain repellants. Their use in fire-fighting foams, though, has resulted in widespread PFAS contamination around airports and military bases nationwide.

Nationwide, PFAS has been detected at more than 300 military sites, including at least 10 in the Bay watershed, according to a report by the nonprofit Environmental Working Group.

“The Bay really stands out,” said Scott Faber, the group’s senior vice president of government affairs. “There’s no other resource, not the Great Lakes, not the Gulf of Mexico or any other resource, where the Department of Defense has such a significant presence and where there’s been testing done that creates cause for concern.”

The contamination at the Navy lab facility in Calvert County, MD, is in a class by itself, though, because it’s the first documented case in the region where streams carrying high levels of PFAS flow directly from the base into the Bay.

Since 1968, fire suppression tests have been conducted at the Chesapeake lab, one of several field sites for the Naval Research Laboratory, which is headquartered in the District of Columbia.

The Navy says its firefighting tests in Calvert County are now done under controlled conditions, some indoors. But for roughly two decades, the service acknowledges, those tests were conducted on a concrete pad outdoors, and the PFAS-laden foam was allowed to run off and soak into the ground or drain into an unlined pond nearby.

Of the many PFAS compounds in use, the U.S. Environmental Protection Agency has issued health advisories for only those two, recommending that drinking water contain no more than 70 parts per trillion of either or both. But a growing number of states, including Pennsylvania and New York, have already acted or begun to set their own drinking-water limits, often lower than the EPA’s guideline and for more compounds.

The health effects of all PFAS aren’t clear, but studies have found that two of the most widely used and studied compounds, PFOS and PFOA, can cause reproductive, developmental, liver, kidney and immunological effects in laboratory animals. Both chemicals have also caused tumors in animals.

The Navy initially didn’t plan to look for PFAS off-base because it hadn’t detected any in the Piney Point aquifer, which county records indicate was the source for drinking water wells in the community around the base.

“We had to plead and beg,” David Harris said, to get the Navy to test the shallow well on the family farm. It’s only used for agricultural purposes now, he explained, but it was the family’s household drinking water supply when he was growing up. “I know I was on that well for 18 years,” he said.

In 2018, the Navy tested 42 private wells outside its fence line. Last year it reported that PFAS turned up in four, including the Harris farm well, though levels of PFOA and PFOS did not exceed the EPA’s guideline.

On the base, the Navy reported that shallow monitoring wells in the fire suppression testing area detected up to a 175,000 parts per trillion combination of PFOS, PFOA and one other compound.

“We have all this PFAS flowing into the Bay,” Harris said. “That’s a huge concern,” he added, or ought to be, for anybody eating oysters, crabs or fish caught nearby.

It certainly struck a nerve in Chesapeake Beach, a resort town of around 6,000 residents just north of the lab.

“We have a very large charter boat business here in town,” said Larry Jaworski, a member of the town council, who sits on the Navy lab’s restoration advisory board. Residents have been voluntarily raising oysters in town for several years, he noted, to restore a large reef offshore in the Bay.

Prompted by the Navy disclosure, officials had the town’s well-based water supply tested, which detected no PFAS. They checked swimming waters at the Bayfront park on the south side of town, which found low levels.

Finally, in July, the town’s public works director went out and collected oysters from the reef local residents had been restoring. He also hooked some fish just offshore from the Navy lab.

Jaworski said he found the results “a little bit alarming,” but also noted that it’s hard to know what to make of them because there are no federal standards for what is safe to consume in fish or other foods.

Jay Apperson, spokesman for the Maryland Department of the Environment, which is overseeing the Navy lab investigation, said the agency doesn’t know enough about how the samples were collected, but it deems the PFAS levels found in Chesapeake Beach oysters to be below the “risk-based consumption screening criteria” it developed last year.

It also said the PFAS levels in the fish pose little risk, assuming that adults don’t make a meal of such fish more than 48 times a year and that children — the most sensitive to long-term exposure to contaminants — eat the fish no more than 28 times a year.

In the wake of high PFAS levels found in groundwater at Naval Air Station Patuxent in St. Mary’s County, an independent lab analysis commissioned by Public Employees for Environmental Responsibility last year found higher levels in an oyster, blue crab and striped bass caught there. The MDE analyzed oysters from the same waters but turned up “no levels of concern,” the agency reported.

Environmentalists say the lack of federal standards for PFAS in water or food leaves the public uncertain and vulnerable. They also fault the Department of Defense for not acting more promptly to deal with PFAS contamination at its bases.

“It’s important to answer a very simple question,” said the Environmental Working Group’s Faber. “Which bases are contaminated that may be contaminating our crabs, oysters and seafood, [and] when does DOD plan to clean it up?”

The Navy expects to file a final report soon with the MDE on its site investigation at the Bayfront research lab. Next up is a more extensive remedial investigation, which will assess the risks to human health and the environment as well as evaluate what can be done.

“I know it’s almost impossible or very difficult for the government to try and clean water that’s in the wells or in the ground,” he said. “But when it’s coming out of these streams, and they have the high numbers like they do, shouldn’t they be responsible for damming it, filtering it and then passing it back again? ... They should be doing something to remove it.”

Denise Keehner, assistant MDE secretary overseeing the state’s PFAS response, said the Department of Defense has “drawn a pretty firm line” in its commitment to focus first on dealing with any drinking water contamination that exceeds the EPA’s health advisory levels.

But she said state regulators have been pressing the Pentagon in recent months “to do more sooner.”

Kaley Laleker, head of the MDE’s Land and Materials Administration, said the Navy has been urged to look into the viability of treating the contamination in the streams themselves, or possibly preventing PFAS-laden groundwater from reaching them. Another option, she suggested, might be “targeted soil removals.”

Robin Harris, David’s wife,has a more pressing personal concern. She said she’s asked if her husband or his mother, who lives with them, should have their blood tested for PFAS because they may have been exposed to it for years.

“People didn’t even have an answer how to even go about it,” she said. “But I think it would be better [to do it] sooner than later.”