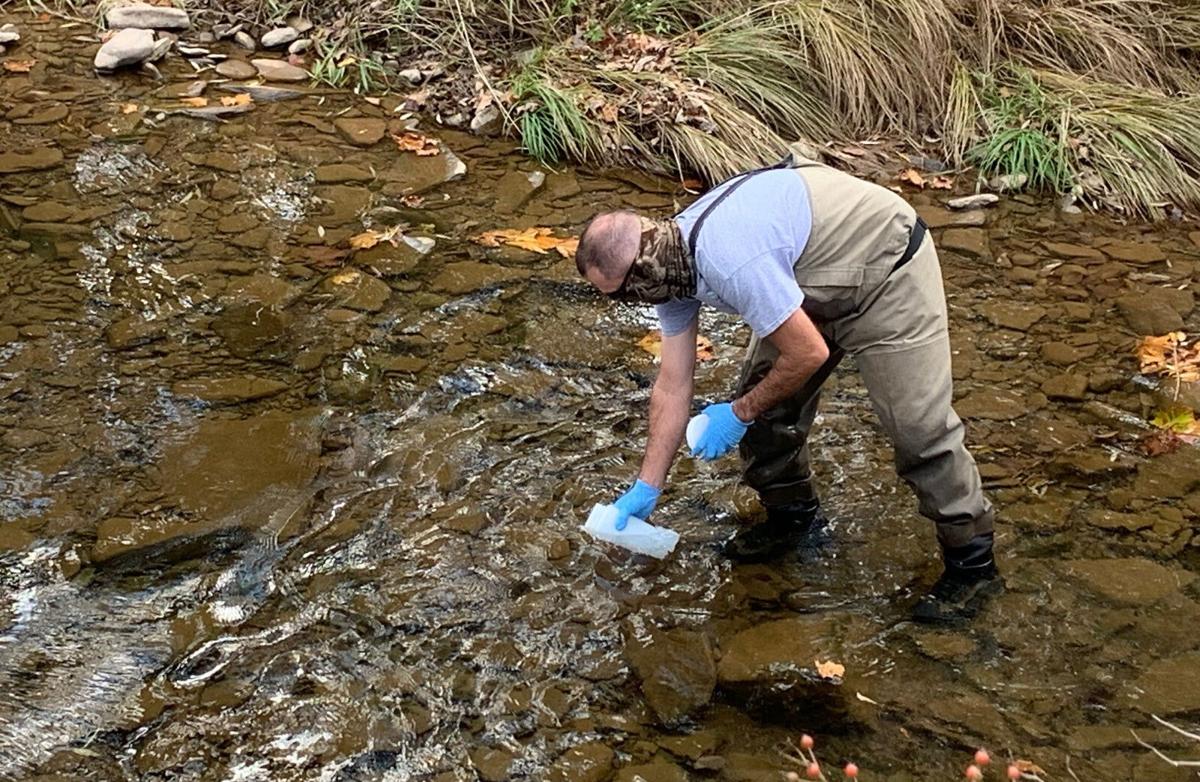 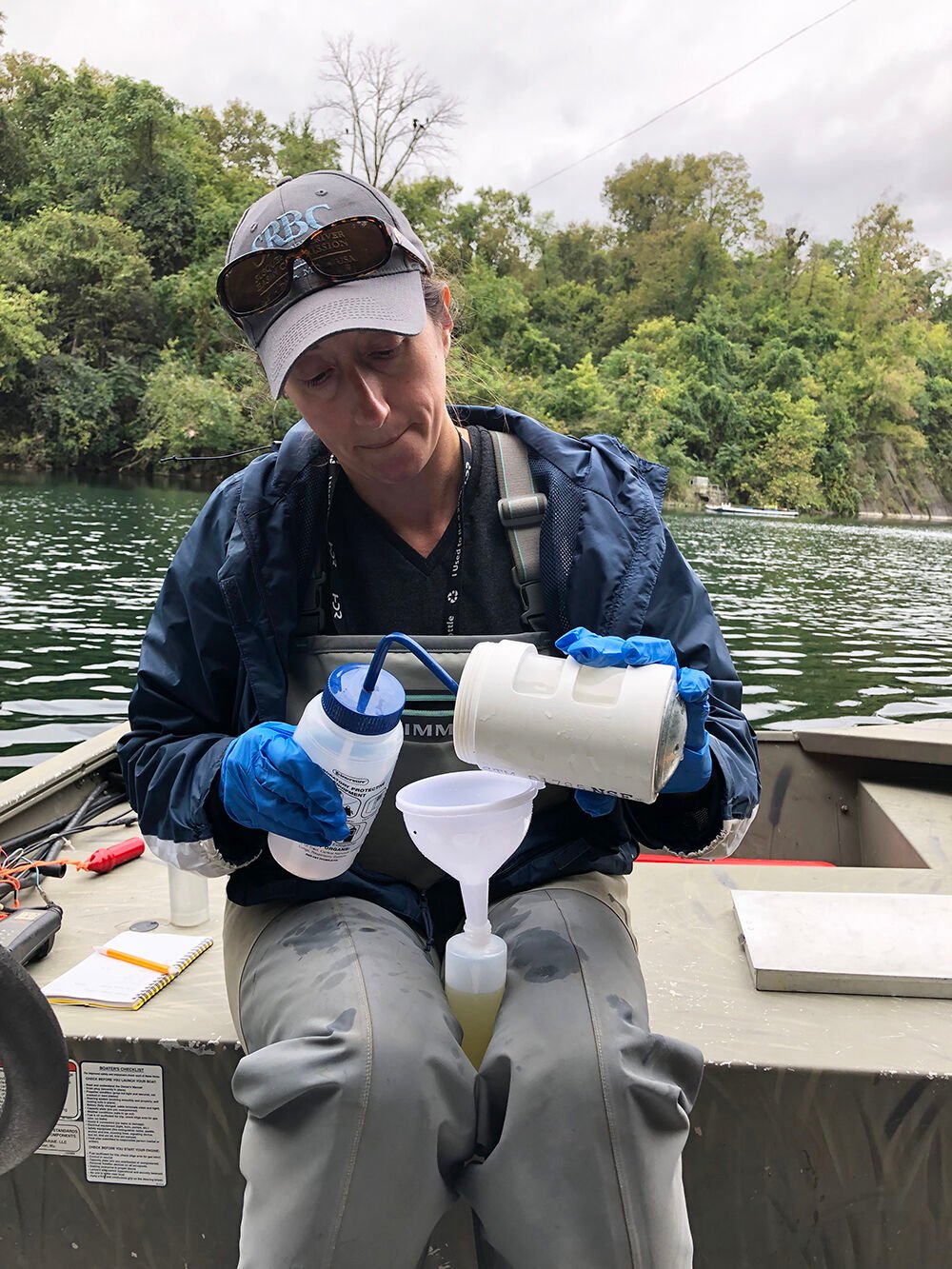 Brianna Hutchison, an aquatic biologist with the Susquehanna River Basin Commission, filters a water sample taken near the Susquehanna River in Lancaster County, PA. A lab later analyzed the sample for DNA that could indicate the presence or absence of invasive quagga mussels in the quarry. 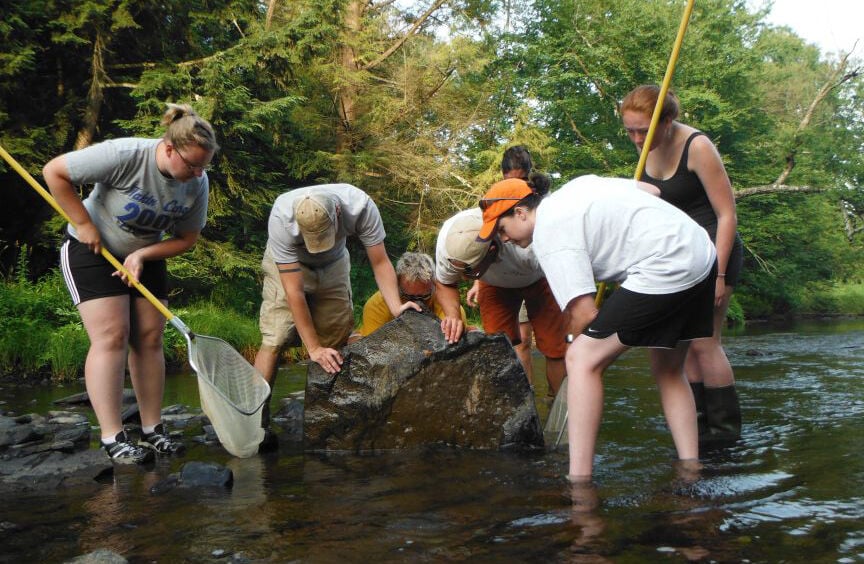 Researchers lift rocks to try to find rare hellbenders. Such labor-intensive field work is being replaced in some cases by the analysis of environmental DNA, based on water sampling and lab work. The eDNA analysis also avoids handling fish and amphibians and doesn’t disturb habitat. (Courtesy of Northeast Association of Fish and Wildlife Agencies)

A new search tool involving not much more than filling a container of water is revolutionizing how scientists detect and keep track of threatened and invasive creatures in the vast waters draining into the Chesapeake Bay.

Some have likened environmental DNA, or eDNA for short, to a kind of forensic science for wildlife conservation. It involves analyzing the unique DNA codes shed into the water by an organism’s skin, feces, blood, mucus, sperm and other biological material.

By doing so, wildlife managers and scientists can verify the existence of elusive fish, amphibians and reptiles — without an army of staff bearing nets, fishing poles, electrofishing rods or permits. It also doesn’t involve handling the creatures or disturbing sometimes sensitive habitat.

“You can scoop up water and know what’s been there,” said Louis Plough of the University of Maryland Center for Environmental Science, who has used eDNA to map where and when river herring are running in the Bay.

Just in the last several years, eDNA has provided invaluable information on some of the most troubled or harmful denizens in the region’s water bodies. For example: In Virginia, Maryland, Pennsylvania, New York and West Virginia, eDNA has been used to find the last haunts of the endangered eastern hellbender. In Virginia, new populations were discovered.

The practice is more reliable in finding the giant salamander than the traditional methods of snorkeling and flipping over rocks — and safer for the hellbenders, too. In a 2018 comparison study of 22 streams in West Virginia, eDNA methods found hellbenders three times more effectively than traditional fieldwork.

In Virginia and Maryland, scientists relied on eDNA for the first survey of migrating alewife and blueback herring in 40 years. It’s a project that would have had a high price tag and likely would not have been funded if traditional field surveys were used, said project co-coordinator Matt Ogburn of the Smithsonian Environmental Research Center.

The eDNA vastly improved on previous surveys that relied on netting fish eggs of river herring. But it was hard to tell the difference between eggs dropped by gizzard and hickory shad and it took expensive laboratory work to sort it out.

In West Virginia, eDNA is being used by Trout Unlimited to find and protect wild trout in previously unsurveyed streams in advance of disruptions from fracked natural gas pipelines, wells and roads.

In Virginia, eDNA searches found endangered and elusive wood turtles in 17 northern Virginia streams where they weren’t known to exist. And the state Department of Transportation paid for a study to develop eDNA protocols so that the agency can look for the endangered James spinymussel before approving road and bridge projects that impact streams.

If eDNA finds the invasives present, crews would follow up with electroshocking to try to catch and kill the invaders. That’s just what happened this summer when a handful of snakeheads passed through the fish lifts at the Conowingo Dam and made it up the Susquehanna.

This fall, the commission is sampling 40 Bay tributaries, including the Upper Susquehanna, to look for snakeheads and the round goby. It’s an extensive survey that would have required months and many people if it were conducted by a traditional field survey.

Every species has a unique DNA sequence. More than a decade ago, scientists started filtering left-behind material floating in the water. Then, in a lab, the unique genetic markers, called barcodes, are found in the goo and used to determine the presence of various wildlife.

Some of the first work done on eDNA was in 2008 when the process was used to target invasive American bullfrogs in French wetlands. Another early study determined if it was humans, cows, pigs or sheep contaminating water sources in Canada.

Since then, scientists have begun mapping out DNA barcodes for the world’s creatures, from nemotodes to elephants.

At the Smithsonian Environmental Research Center, Ogburn, along with biologist Rob Aguilar and others have been working since 2012 on a Chesapeake Bay Barcode Initiative to create and share a data base so that scientists can use eDNA to identify all organisms in the Bay watershed to a species level, from tiny crustaceans to sharks. So far, they have collected 80% of the 300 fish species swimming in the Bay and 50% of 1,000 or so macroinvertebrates.

In vast expanses of water, like the Chesapeake Bay, eDNA offers a quick, easy and relatively inexpensive grab sample of what’s swimming around.

Ever-improving eDNA search methods have been particularly useful in the early detection of invasive species in the Bay watershed such as snakeheads, blue and flathead catfish, round goby and didymo. The more quickly that water quality and wildlife managers find them, the sooner they can swing into action.

Also, eDNA can help determine if eradication efforts of an invasive species have been successful, or if wild trout have moved into a restored stream.

Scooping water samples and lab work to analyze DNA make it far easier to find declining or endangered species in inaccessible waterways. The sometimes delicate creatures don’t even have to be captured or handled. New devices that can be left in the water to gather timed samples are coming on strong, further reducing the human resources needed for collecting eDNA.

“Especially with cryptic creatures that are hard to find, it can focus your efforts,” observed John Kleopfer, Virginia’s state herpetologist. “It’s definitely another tool in the toolbox for us.”

A look into the effectiveness of eDNA by the U.S. Geological Survey concludes, “For small, rare, secretive and other species difficult to detect, eDNA provides an attractive alternative for aquatic inventory and monitoring programs. Increasing evidence demonstrates improved species detection and catch-per-unit compared with electrofishing, snorkeling and other current field methods.”

The simple and cheaper eDNA method can stretch grant money. “There are cost savings from having one person go out and take grab samples that will take an hour instead of four people in the field spending a full day electrofishing,” said Ellyn Campbell of the Susquehanna River Basin Commission. “There is so much more value and bang for the buck.”

Determining species through lab analysis, with a quick turnaround, can cost $80–$100 per sample. “It seems expensive until you factor in how much it costs to have a 10-person crew lift rocks and find nothing. That gets expensive,” said Eric Chapman, a field scientist with the Western Pennsylvania Conservancy who has used eDNA to find elusive hellbenders. Next year, the conservancy hopes to partner with a local high school to do the eDNA lab work.

Ogburn considers eDNA lab analysis a bargain in his river herring research. An eDNA sample can be filtered and processed in 15 minutes, compared to paying several people to travel to a site, launch a boat and try to gather fish eggs and larvae. Then it takes roughly an hour to sort through each sample under a microscope.

Environmental DNA may be reimagining the frontier of conservation sleuthing, but scientists say it will never completely replace old-fashioned ways in the field.

For one thing, eDNA has limitations.

“It will tell you if you have animals present, but not the sex ratio, whether reproduction is going on and age classes. It does tell you animals are in that stream but not when and how far upstream,” Kleopfer said. “It won’t replace field studies.”

Agreed Aaron Henning, a fisheries biologist with the SRBC, “It will never replace electrofishing. Nothing compares to having your hands on a sample.”

Chapman has used eDNA extensively to find hellbenders. But hands-on work is still necessary to find out crucial information such as age and health, he said. The attitude of many field biologists, he said, remains “If we don’t touch it, we don’t believe it.”

In certain conditions, like excessive sunlight, high water temperatures or chemicals in the water, eDNA floating in the water will degrade fairly rapidly, reducing its effectiveness and making it difficult to distinguish between closely related species, noted Walter Smith, an associate professor of biology at the University of Virginia’s College at Wise.

High water may transport the evidence of species far downstream from where they actually are. Barcodes for some species have been wrong, confusing results.

Still, eDNA has quickly become a heavy hitter in the toolbox of finding out who swims where throughout the Chesapeake Bay.

“It won’t solve all data needs but it allows us to do a lot of things that weren’t possible before,” Ogburn said.