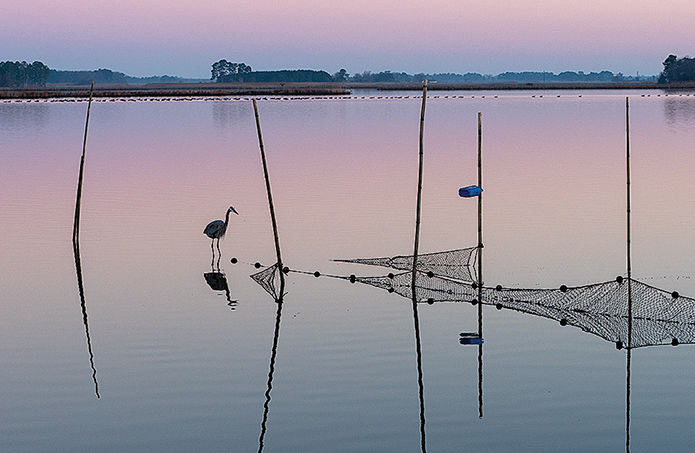 Reducing nutrient pollution, which causes the annual "dead zone" in the Chesapeake Bay,  is one of the primary goals of the Bay cleanup effort. 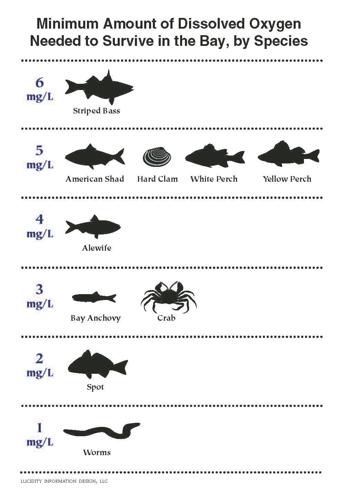 Scientists are expecting this year’s Chesapeake Bay “dead zone” to be slightly less than its long-term average — but a wide swath of the Bay will still be off-limits to most aquatic life during July, when conditions are expected to be at their worst.

In all, scientists expect about 1.37 cubic miles of the Bay, or 11%  of its total volume, to suffer from hypoxia — or low oxygen — this summer. But in July, that is expected to swell to 1.9 cubic miles or about 16% of the Bay.

The hypoxia will squeeze some species out of those areas and kill others. Aquatic life — like species living on the land — requires oxygen to survive, but in lower amounts.

In the Bay, huge dead zones occur each summer as the result of excess nutrients — primarily nitrogen — which spur large algae blooms. When the algae die, they sink to the bottom and are decomposed by bacteria in a process that uses up oxygen, especially in deep areas of the Chesapeake.

Some species flee to other areas, but those that can’t, such as mussels, clams and worms, may die from lack of oxygen. Even those species that are not killed may be indirectly harmed. Lack of sufficient oxygen in cool, deep water can force species like striped bass into warmer, more stressful water near the surface.

Reducing nutrient pollution to improve oxygen levels is one of the primary goals of multibillion-dollar Bay cleanup effort, which has been under way since the 1980s.

“Dissolved oxygen levels area a key indicator of Bay health as sufficient oxygen is needed to support our iconic Chesapeake species such as oysters, crabs and fin fish,” said Bruce Michael, director of the resource assessment service of the Maryland Department of Natural Resources. “The forecast brings attention to our continued need to implement our nutrient reduction strategies.”

The annual hypoxia forecast, released Wednesday, is made by scientists from the state-federal Chesapeake Bay Program, U.S. Geological Survey, University of Maryland Center for Environmental Science, and University of Michigan.

The primary drivers for low oxygen conditions are river flows and nitrogen inputs. High river flows carry large amounts of nutrients washed off the land and also create conditions that prevent surface and bottom waters from mixing, which worsens conditions in deepwater areas.

Other factors during the course of the summer, such as the amount of wind (which can improve oxygen conditions) or high temperatures (which can worsen them) can affect the ultimate extent of the dead zone.

This year’s improvement stems from slightly below average river flows into the Bay from January through June, which carried less nitrogen washed off the land. Altogether, scientists estimate that the amount of nitrogen entering the Bay during that period was 17% less than normal.

It’s a dramatic improvement from last year, when record flows resulted in some of the worst oxygen conditions in recent decades.

The predicted amount of hypoxic water this summer is 9% below the long term average since 1985 of 1.5 cubic miles — an area equivalent to about 700 M&T Bank Stadiums.

The volume of anoxic water — water that essentially has no oxygen at all — is expected to cover 0.34 cubic miles, or 4% less than the long-term average.

The Bay has about 12.2 cubic miles of water.