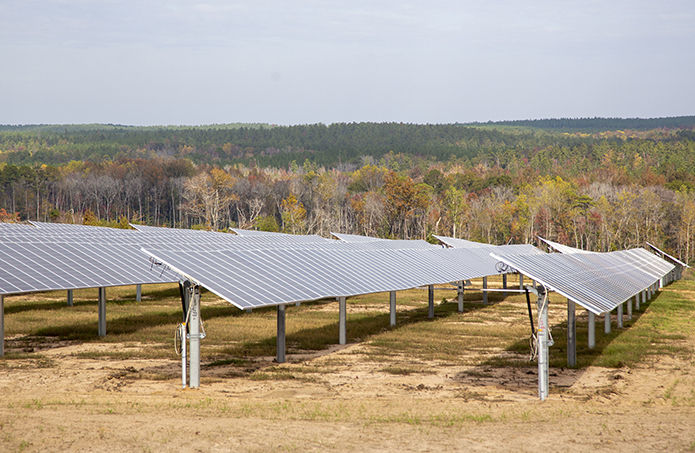 A proposal from NextEra Energy Resources to build a solar energy site near Gettysburg, PA, has met with controversy. The company opened this solar farm in South Carolina last fall. 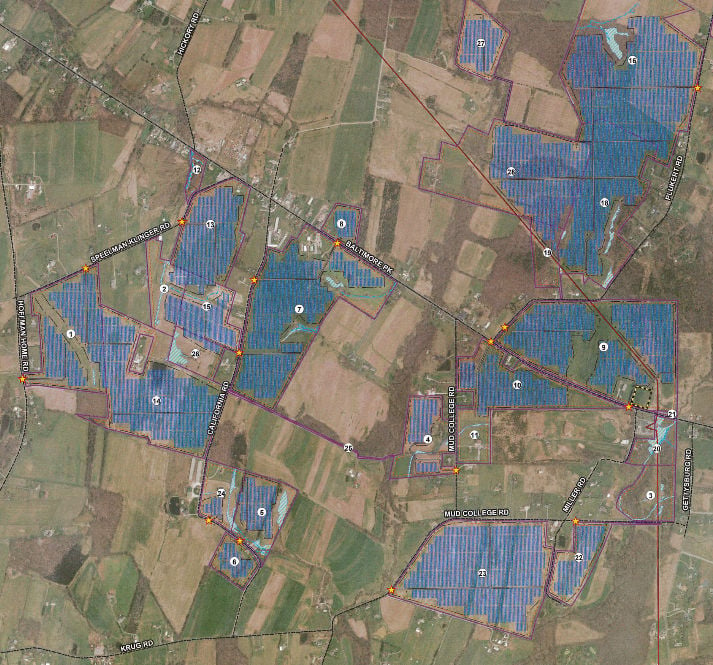 This rendering shows where some 275,000 solar panels would be placed on 18 farms for the proposed Brookview Solar Energy Center in Adams County, PA, 3 miles from Gettysburg National Military Park.

This story has been updated.

Pennsylvania, like other states in the Chesapeake Bay region, wants to combat climate change with more renewable energy. But, as happened with some recent solar proposals in Maryland and Virginia, going green has some people seeing red.

Such is the case near the Civil War mecca of Gettysburg, where a proposal to build Pennsylvania’s largest solar project across nearly 1,000 acres of farmland has been met with detractors.

An initial hearing on the proposed Brookview Solar Energy Center on Jan. 15 drew more than 300 people to a fire hall. A second hearing on Feb. 12 by Mount Joy Township’s Board of Supervisors did not even finish the testimony or cross-examination of the applicant’s first witness. Three more hearings are scheduled through March 25.

The proceeding by Mount Joy Township’s Board of Supervisors mainly set up ground rules for the hearing, which will continue on Jan. 29 when project owners and opponents provide testimony about the project.

Part of the proposed project is in an agriculture conservation zone where solar projects are allowed. But some of it lies in a special mixed-use zone, bordering a highway where solar projects can be permitted with conditions attached. After the hearings, the board of supervisors will decide if that will happen.

NextEra Energy Resources, a Florida-based company that builds solar and wind energy projects, touts the $90 million project as a benign win-win for the environment and the community.

“The time is ripe for solar energy in our country and that is absolutely true in Pennsylvania as well,” said Bryan Garner, a NextEra spokesman. “Solar energy makes a good neighbor.”

But some people who live near the proposed project and elsewhere in Adams County have decried the solar farm, saying it will harm property values, ruin prime farmland, alter the flavor of open land surrounding Gettysburg National Military Park that lies just 3 miles away, and deal economic blows to the area’s agri-tourism industry.

“This is not the right project, the scope and scale for Mount Joy Township,” said Nathan Wolf, an attorney representing about 20 landowners who live adjacent to the site. “You have a lot of very frightened people who don’t know what to expect and are looking to their township to protect them.”

The 18 farm families would be paid $16 million to lease their crop fields for up to 35 years. During that time, the noiseless, unlit (except for a substation), nontraffic-generating, odorless solar panels would quietly generate up to 75 megawatts of power.

According to NextEra, 75 megawattts is enough to power 15,800 homes and deliver pollution reduction equivalent to taking 26,000 cars off the road. Forest clearing would be “minimal,” it said, though no figures are given.

Native grasses would be planted below the solar panels.

Electricity would go into a regional power grid used by multiple states.

The project, if built, would apparently be Pennsylvania’s largest, eclipsing a 500-acre site for a 150,000-panel, 70-megawatt solar farm that is scheduled to open this summer in adjacent Franklin County. Penn State University is buying the power that will be generated there.

The solar installations in the Brookview project would be screened by more than 20 miles of trees and vegetative buffers that would add wildlife habitat to the landscape, NextEra said.

The company also said it would pay up to $10 million in local taxes over the course of the project, and the township would not have to provide public water or other infrastructure services to support it.

And when the solar project comes to the end of its life, after about 25 years, all materials would be removed. Solar panels would be recycled, and farm soils would be restored to the crop-enhancing nutrient levels found at the beginning of the project.

The project application cited studies that suggest the solar project would not lower property values to the 114 adjoining homes or produce glare problems. Wolf takes issue with those studies because the research was done around solar farms in the Midwest.

NextEra has made a $1,500 donation to a local food bank and promised to budget $300,000 over the course of the project for community needs.

The application included signatures from each of the farm families on form letters from NextEra stating that the project “will benefit our community greatly” and contribute to “Pennsylvania’s clean energy future.”

PennFuture, one of the state’s largest environmental groups, endorsed the project.

But some residents are adamantly opposed to it. One letter-writer to the local paper argued against “making an area rich in history and agriculture an industrial zone in one meeting.”

Though the solar farm would be 3 miles from Gettysburg National Military Park, some say hundreds of acres of glass panels glinting in the sun is not a suitable frame for the famous historic site.

“Part of what draws visitors to the battlefield and other tourist destinations time and again is that bucolic traverse from all directions to reach the jewel of national battlefield parks that is Gettysburg,” Britt Isenberg, an Adams County resident, said in a letter to the editor to the local newspaper.

“Now replace that visual aesthetic on the drive in with thousands of solar panels. The possible detrimental economic impact to history and agri-tourism needs to be fully explored, comprehended and documented.”

Wolf added, “Tourism is such a driver of the local economy. Gettysburg is one of the most visited sites in the country. Will it have an impact on people who come to the area and spend money? Our proximity to the battlefield is not so far and we should look at those impacts.”

A petition circulated by Responsible Solar Citizens of Mount Joy Township in an effort to stop the solar project has garnered 1,213 signatures. “I grew up in this area. Farmland should be kept farmland and for the animals, not solar,” wrote one woman who signed the petition.

But NextEra’s Garner maintains that the extra income local farmers would get actually strengthens the chances of ag land staying in production.

“It’s a tough time to be a farmer in America," he said "Many farmers decide that dedicating all or some of their land to solar energy for a time is a great way to diversity to keep their farm going for the next generation.”

Others said they couldn’t support sacrificing farmland to an industrial-size solar project when the power produced would be used by customers in other states, not to generate less-polluting energy for the area. As part of the regional electricity grid, the power could be used anywhere among 13 states and the District of Columbia.

“Understandably, in today’s environment, sharing resources is vital,” Isenberg said. “But does the benefit outweigh the cost of permanently destroying hundreds of acres of pristine agricultural landscape?”

Note: This article has been updated to correct an earlier reference to the city of Philadelphia funding the proposed project. Philadelphia is not involved with this solar project. The Bay Journal regrets the error.