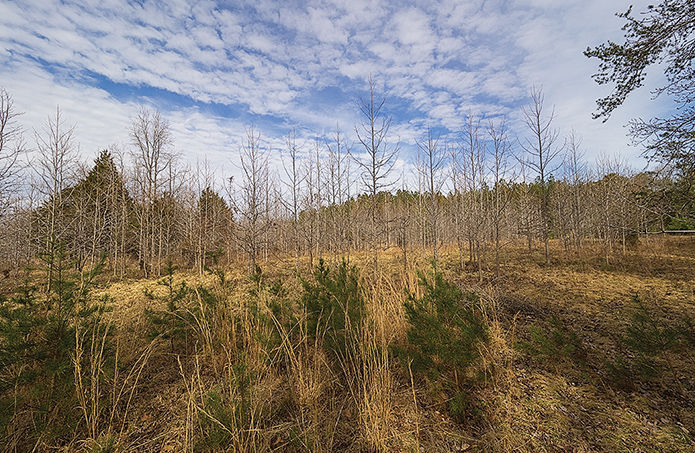 Relatively young trees grow in an area that had been cleared on the 537-acre mostly wooded tract where Origis Energy USA had proposed installing 100,000 solar panels. 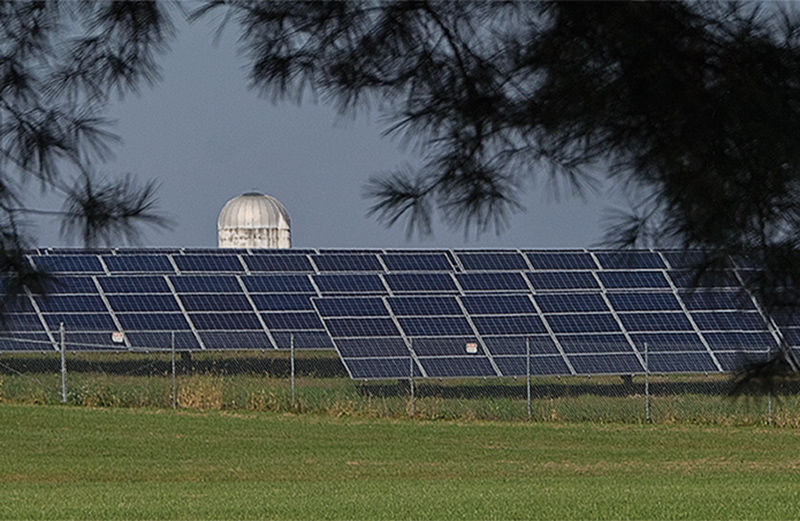 This solar field in Worton, in Kent County, is one of an increasing number of such operations on the Eastern Shore.

Maryland regulators have blocked two large solar power projects in Charles County that together would have cleared 400 acres of woodlands. Some environmentalists hailed the decisions while others lamented them, highlighting tensions in the state over the siting of renewable energy projects.

The Maryland Department of the Environment (MDE) announced Wednesday that it had denied a wetlands and waterways permit to put about 100,000 photovoltaic panels on a mostly wooded tract near La Plata that would have sold electricity to Georgetown University.

The MDE also declared that a second project planning about 80,000 more solar panels a few miles away did not meet the state’s requirements for protecting a high-quality stream flowing by that heavily forested site. That project would have produced power for the Southern Maryland Electric Cooperative, or SMECO.

MDE Secretary Ben Grumbles said in a statement that the projects posed “an unacceptable trade-off for the environmental benefits of clean energy.”

“While Maryland strongly supports the increased use of clean and renewable energy sources,” Grumbles said, “these two proposed projects would harm the nearby high-quality stream in Charles County and threaten our continued restoration progress in the Chesapeake Bay watershed.”

Origis Energy, the Miami-based developer of both projects, did not respond to requests for comment.

The larger of the two projects, on Shugart Valley Place, would have produced nearly half of the electricity consumed by Georgetown University. The proposal was a centerpiece of the university’s efforts to shrink the carbon footprint of its District of Columbia campus.

But the plan drew fierce and wide-ranging opposition because it called for clearing 210 acres of trees in Charles County’s Nanjemoy Peninsula. The Audubon Society has identified the 537-acre site as part of an “important bird area” on the peninsula because of the habitat the woods provide, particularly for species that need undisturbed forest to nest.

“This is really good news for the forest birds that live at this site,” said David Curson, interim executive director of Audubon Maryland-DC. The peninsula harbors the largest contiguous forest in Southern Maryland, he said, where species such as the wood thrush, prothonotary warbler and Eastern whip-poor-will have been seen.

Environmentalists also had voiced concern about the consequences the project construction could have had on Wards Run, which flows through the site on its way to the Potomac River.

The MDE declared that Origis had “failed to document and demonstrate that a serious effort was made to avoid, minimize and mitigate or otherwise offset the [project’s] effects on water quality.”

Alison Prost, Maryland executive director of the Chesapeake Bay Foundation, applauded the MDE decision and said she hoped it would set a precedent. While Georgetown’s embrace of solar is “admirable,” she said, “clean energy should never require clearing high-quality forests.”

The other solar project, on Ripley Road, had not generated nearly as much pushback, and the state Public Service Commission had conditionally approved the project more than a year ago. But the MDE announcement said the developer had not met a key condition, requiring that Mill Run, which flows through that 300-acre site, be protected from any harm caused by the clearing of 190 acres of trees there.

“MDE does not consider the economic or social benefits of the proposed project to justify any decrease in water quality,” the agency announcement said.

The projects’ rejections come amid continuing friction in Maryland over the siting of renewable energy projects, particularly solar.

The General Assembly earlier this year boosted the state’s renewable energy goals, from 25% by 2020 to 50% by 2030. Of that total, 14.5% is to come specifically from solar. But some rural and suburban counties — responding to complaints about the loss of farmland or scenic landscapes — have taken steps to limit the amount or location of solar development in their jurisdictions.

Earlier this month, Gov. Larry Hogan issued an executive order forming a task force to develop what he called “consensus-based recommendations” on the siting of new solar and wind energy projects in the state.

Kimberly Golden Brandt, director of the smart growth program with Preservation Maryland, said she thinks more state guidance is needed. She noted that Charles County had approved both of the solar projects now blocked by the MDE.

“What’s the next project that’s going to come in and [have] hundreds of acres of forest approved for clearing?” she asked.

Solar industry representatives have reacted coolly to the governor’s move, noting that their industry would have only one of the 15 seats on the task force. But they also said they were not concerned by the denial of the two Charles County projects.

“It’s not a huge surprise to see those particular projects and that particular company get an unfavorable outcome,” said Cyrus Tashakkori, president of Open Road Renewables, a Texas-based company developing other large-scale solar projects in Maryland.

Tashakkori said that industry representatives have been working for the past couple of years with state and local officials, legislators, and farm and conservation groups to work out siting concerns and develop “best practices” for solar development in Maryland.

David Murray, executive director of the Maryland, Delaware, District of Columbia and Virginia affiliate of the Solar Energy Industries Association, said that “clear cutting for forests is not an industry best practice.”

It’s unclear what could happen next. A lawyer for the family that owns the tract targeted for the Georgetown project had said that if the project fell through, the trees still could be harvested and the land sold for development.

The Audubon Society’s Curson said he hoped that wouldn’t happen.

“What I would hope,” Curson added, “is that a conservation purchase could be arranged.”

Curson and other opponents of the Georgetown project say they support solar energy, but they want to see it steered to non-agricultural sites such as rooftops and former industrial “brownfields.”

Industry advocates counter that those sites are often too costly to develop. It’s unrealistic, they say, to expect to meet the state’s solar energy goals if projects are not allowed to convert at least some of the state’s farmland.

“The only affordable form of solar energy is in fields,” said Montgomery County Del. Kumar Barve, chairman of the House Environment and Transportation Committee. He said those who claim to support solar energy only if it avoids taking farmland “want to eat omelettes [but] don’t want to break any eggshells.”

Mike Tidwell, founder of the Chesapeake Climate Action Network, noted that Origis had pledged to permanently preserve more forested acreage elsewhere to make up for what it would clear — woodlands that could now wind up developed in the future.

“How is that a win?” Tidwell asked. “We’ll get no solar now, and the trees could be cut down, too.”