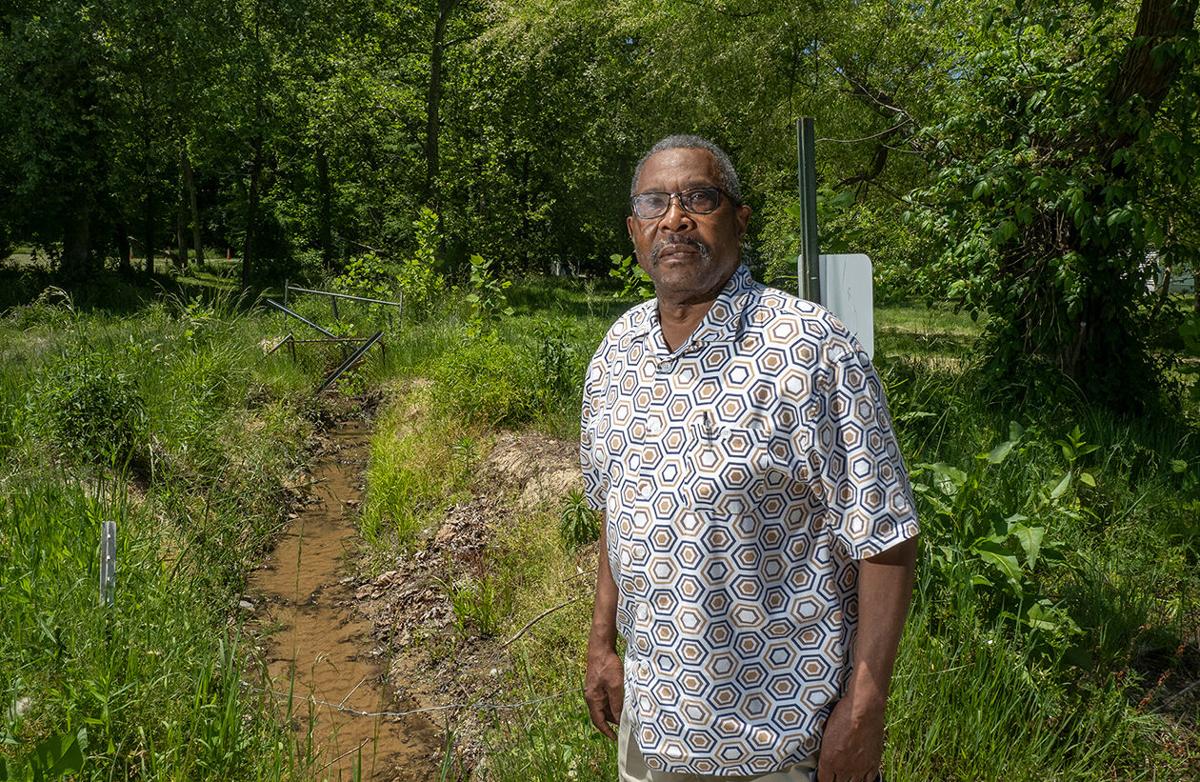 Mayor James Crudup of Eagle Harbor, MD, stands along the banks of Coleman Creek during a dry spell. He is fighting to stop stormwater discharges from the neighboring Chalk Point power plant. 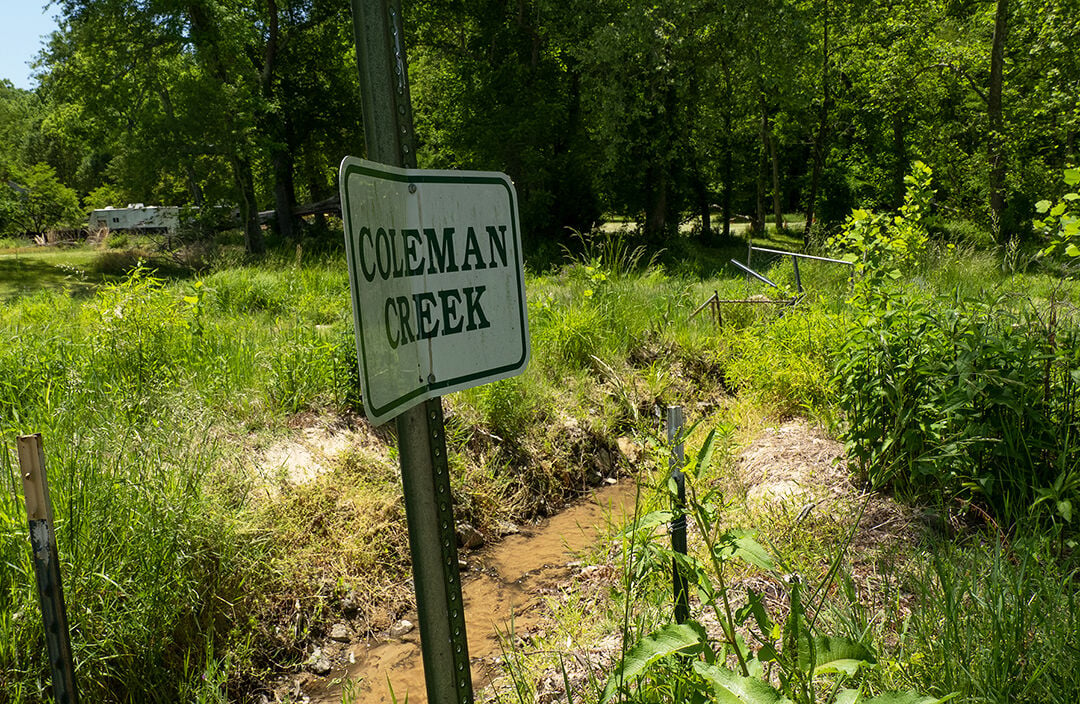 Coleman Creek flows toward the Patuxent River in Eagle Harbor, MD, during a dry spell in May. 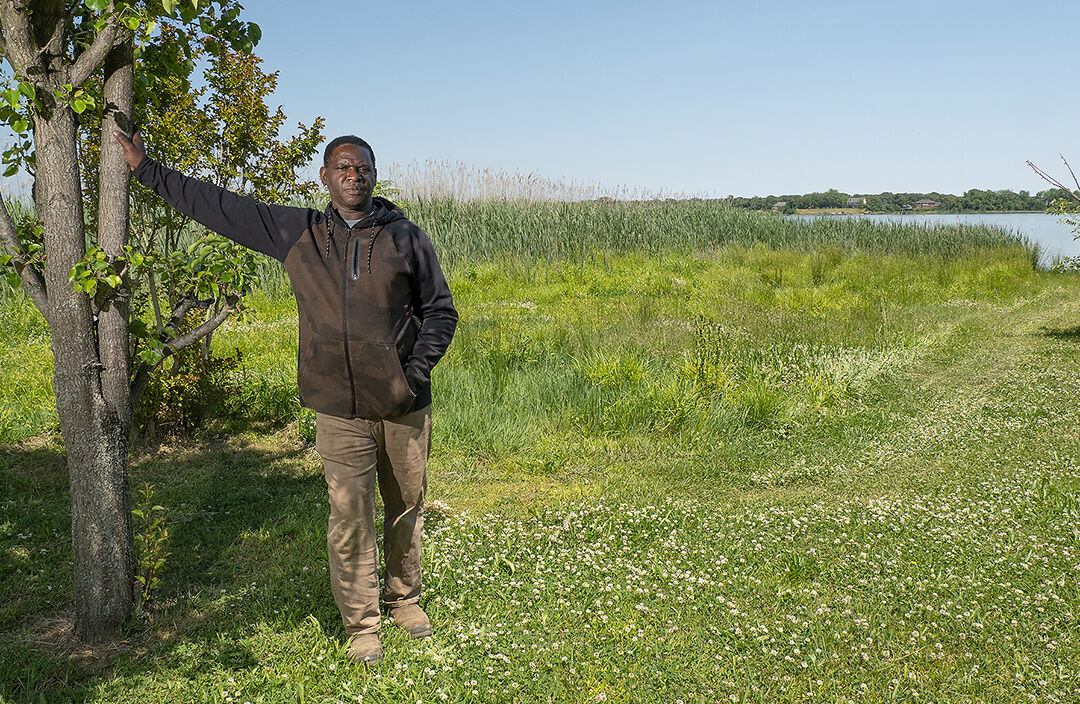 James Jones, a property owner in Eagle Harbor, MD, discovered a culvert dumping stormwater from the Chalk Point power plant property into Coleman Creek, lined by phragmites reeds behind him. His property floods during heavy rains. 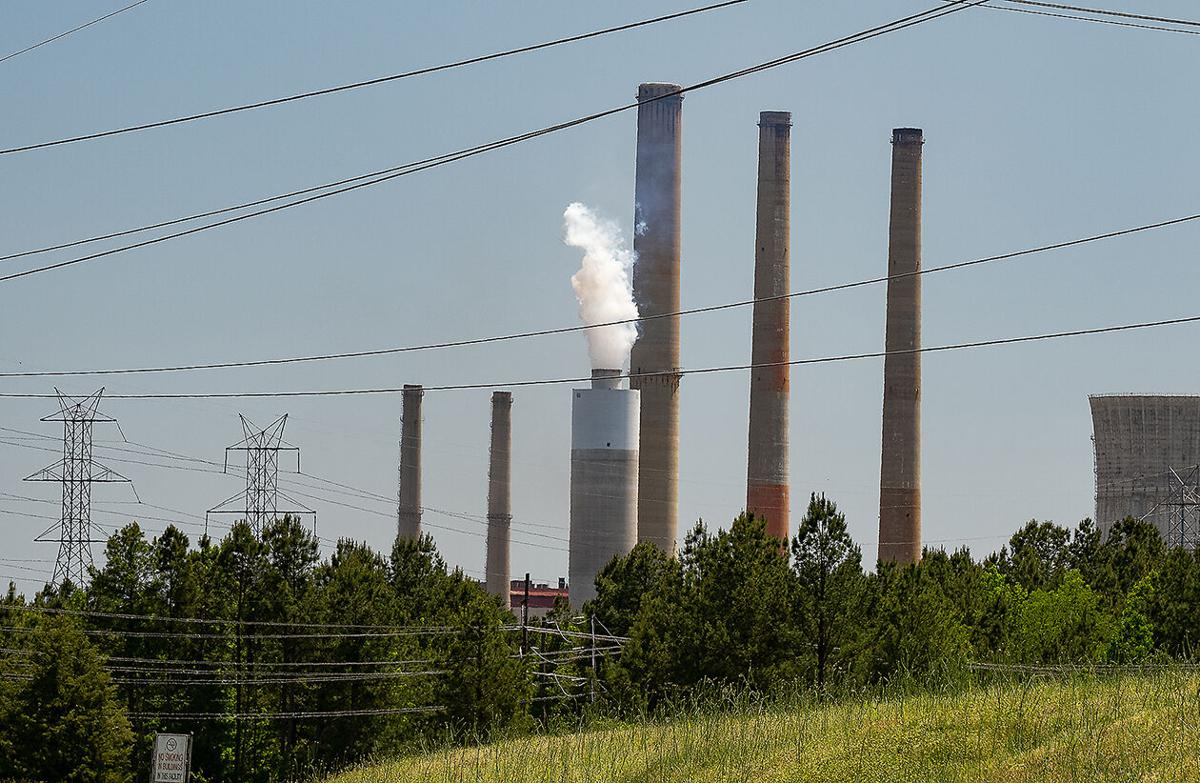 The Chalk Point power plant in Maryland has been discharging stormwater to the adjacent town of Eagle Harbor. 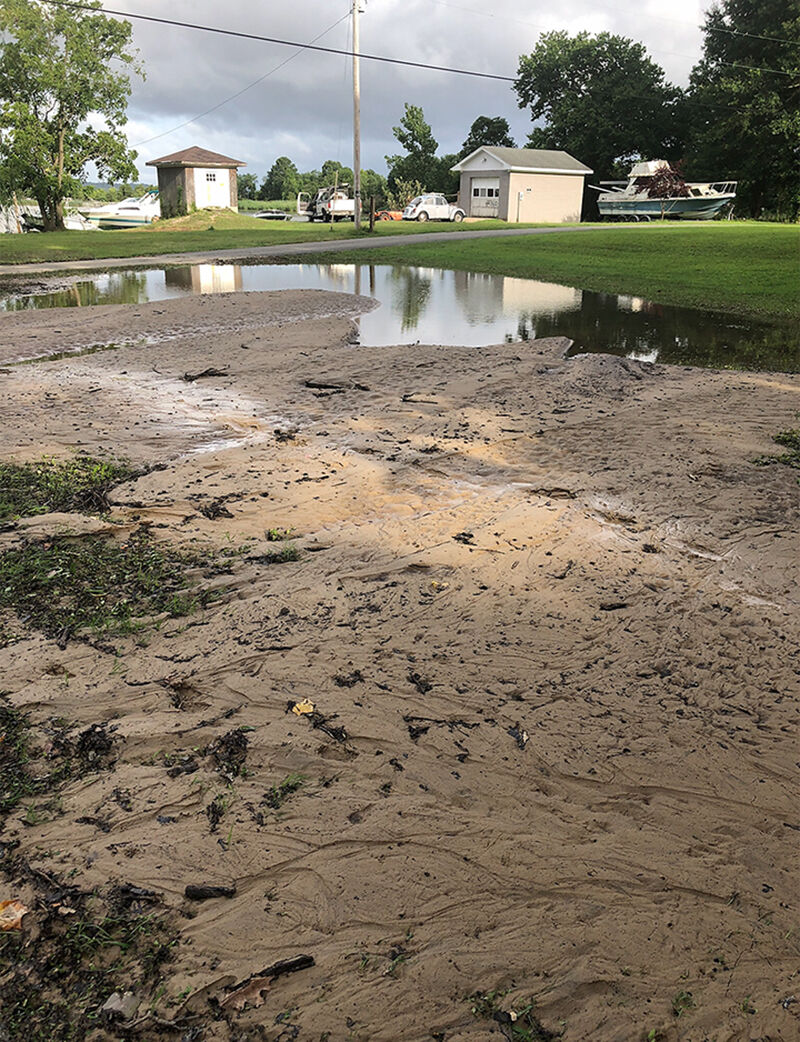 This area near the mouth of Coleman Creek in Eagle Harbor, MD, displays the aftermath of a flooding event in July 2018. James Jones’ property is in the background.

A Maryland power plant has been releasing stormwater for years into a small Patuxent River town founded in the late 1920s as a vacation resort for Black professionals.

The outflow has intensified floods and damaged the stream that the community relies on to drain heavy rains, town officials say.

A resident of the town, Eagle Harbor, spotted a culvert in a wooded area earlier this year that appears to feed stormwater from a Pepco-controlled portion of the Chalk Point generating station into the town’s drainage system.

An official with the Maryland Department of the Environment confirmed in a follow-up investigation that the previously undocumented culvert is “likely contributing” to flooding in the town and “has created an adverse impact” on the stream it flows into.

The MDE inspector, Renato Cuizon, declined to cite Pepco with a violation, however. The water flows off the company’s 140-acre switchyard, which, as a type of industrial activity, is not required to get a stormwater permit, said MDE spokesman Jay Apperson.

But in his four-page inspection report, Cuizon urged both Pepco and GenOn Holdings, which owns other portions of the Chalk Point facility, to make amends for the situation. Among other steps, he told the companies to stop the discharge into Eagle Harbor and work with the town to fix the damage it had caused.

James Crudup, Eagle Harbor’s mayor, said that the discovery of the 36-inch culvert helps explain why flooding has worsened in the community in recent years. A powerful storm last fall left parts of the town covered in sand, silt and other debris. Crudup said it was the worst flooding he had seen in his 50 years in Eagle Harbor.

To him the affair looks like a classic case of environmental injustice.

“Until we get to the bottom of it, I’m pissed,” Crudup said. “They just thought, ‘Well, here’s a small, Black, dumb township. We’ll just stick the pipe in, and they won’t do anything about it.’”

Jamie Caswell, a Pepco spokeswoman, said the electric utility only became aware of the culvert’s issues during an April 20 inspection of the site with representatives of the MDE and GenOn Holdings.

Pepco “will work cooperatively with [the MDE] to complete any maintenance or necessary adjustments, if needed, to address this situation,” Caswell said in a statement.

GenOn attorney Daniel McDevitt told the MDE in a letter that the stormwater is flowing “solely” from Pepco’s share of the power plant property, and it is that company’s responsibility to address the problem. McDevitt declined to comment for this report.

The pipe is the latest chapter in a long and fraught relationship between Chalk Point and Eagle Harbor.

The town was incorporated in 1929 on the western shoreline of the Patuxent River at the southernmost tip of Prince George’s County, about 40 miles southeast of Washington, DC. During the Jim Crow era, it evolved into a quiet getaway for Black families, many of them seeking to escape the heat of the District’s sticky summers.

With 69 current residents, it remains one of the smallest towns in Maryland to have its own government — a mayor and a four-member town commission, but no full-time, paid staff. There are no businesses, so the town’s revenues are drawn exclusively from property taxes, Crudup said.

It has been nearly 60 years since Chalk Point was built on Eagle Harbor’s doorstep, but many locals still consider its presence a blemish on the community they have long referred to as “Paradise on the Patuxent.”

In 2003, the U.S. Public Interest Research Group, an advocacy organization, included Chalk Point on a list of “America’s Dirtiest Power Plants.” Crudup said the community has battled soot emanating from the plant for years.

A victory of sorts now looms. GenOn announced last year it plans to shut down the plant’s two coal-fired units by June. The company said the decision was forced by “unfavorable economic conditions” and “increased costs associated with environmental compliance.” The company will continue operating the generators that are powered by natural gas and fuel oil, it said.

Eagle Harbor, meanwhile, has long struggled with flooding. During heavy rains — which appear to be increasing in frequency and intensity, Crudup said — stormwater rolls down the hill above town and overwhelms its main water artery, Coleman Creek. Over the years, the surges have scoured the creek’s channel deeper and eroded its banks.

In 2017, the town won a $100,000 coastal resiliency grant from the state Department of Natural Resources to design the stream’s restoration. The project seeks to reconnect Coleman Creek with its floodplain, giving the water places to stop on its fast-paced journey through town to the Patuxent, Crudup said.

The effort has been slowed by the process of getting signatures from property owners along the creek’s path. One of them, James Jones, decided to see for himself why Coleman Creek was so easily flooded. So, earlier this year, the retired DC Water inspector trudged along the stream in search of its headwaters.

“When I got to the end, I looked and saw a 36-inch culvert pipe coming in from the woods,” Jones said. “The water coming off their plant was tearing the creek up and bringing the silt down from their property into the river.”

The MDE inspection found significant evidence of erosion where the plant runoff meets Coleman Creek. So much of the hill has washed away at the spot that groundwater is now seeping out, Cuizon wrote in his report. The report makes no mention of any water quality testing having been conducted on stormwater from the plant that reaches the town, except to say that no petroleum could be seen or smelled.

Patuxent Riverkeeper Fred Tutman was consulting with the town on the stream restoration project when the culvert issue cropped up. He is less concerned, he said, with how it got there than with making sure it gets removed and the damage it caused is fixed.

“I’m thinking this is something somebody overlooked,” he said. “We can argue they didn’t know [about the culvert], but to me the test of that theory is how fast they fix the damn problem.”

In a May 24 letter to the MDE, Pepco outlined specific actions to address the state’s concerns. Pepco said it would perform engineering work to slow the speed of the stormwater and reduce the amount of potential sediment flowing toward Coleman Creek. The company also vowed to repair the channel leading from the switchyard’s outfall to the creek.

Crudup, in an interview, called Pepco’s response “presumptuous” and pressed for the company to cease entirely its stormwater discharges into the town. He suggested it should also help with fixing Coleman Creek and pay restitution to property owners who have been affected by flood damage over the years.

Crudup said he hoped that the town and Pepco could resolve the dispute through negotiation.