The 91-year-old hydroelectric dam is located in Maryland about 5 miles south of the Pennsylvania border and 10 miles upstream from where the Susquehanna River flows into the Bay. 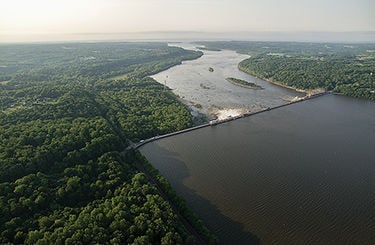 The 14-mile reservoir behind Conowingo Dam has reached its capacity to trap sediment from upstream sources that flows down the river. As a result, the nutrients associated with that sediment now flow into the Chesapeake.

A Maryland official called the pending relicensing of Conowingo Dam a “once in a generation” chance to hold its owners accountable for the environmental impacts the 94-foot-high structure has on the Susquehanna River and Chesapeake Bay.

But a representative of Exelon, the utility that owns the hydroelectric facility, said it had already pledged more than $300 million to mitigate the dam’s impacts over the coming decades and the state was trying to force it to pay billions more to fix problems it didn’t cause.

Most of the recent debate between the two parties has taken place in court since Exelon sued Maryland last May over conditions the state sought to place on the company’s request for a new 46-year operating license. But representatives from each side also sought to make their case in public at a January meeting of the Chesapeake Bay Commission, a body of state lawmakers and other officials that advise general assemblies in the Bay region.

The 91-year-old hydroelectric dam is located in Maryland about 5 miles south of the Pennsylvania border and 10 miles upstream from where the Susquehanna flows into the Bay.

The dam looms as a major obstacle for Bay cleanup efforts, largely because the 14-mile reservoir it creates has reached its capacity to trap sediment from upstream sources that flows down the river. As a result, the nutrients associated with that sediment now flow into the Chesapeake, where they can spur algae blooms and contribute to other water quality woes.

The state-federal Bay Program partnership has estimated that additional annual reductions of 6 million pounds of nitrogen and 260,000 pounds of phosphorus are needed to offset the impact of the dam’s lost trapping capacity. That would be roughly an additional 5 percent reduction for a river where upstream nutrient control efforts in Pennsylvania are already far behind schedule.

The U.S. Environmental Protection agency in February began requesting applications from entities interested in developing a plan to tackle the problem.

Exelon is seeking a new operating license from the Federal Energy Regulatory Commission to continue generating power from Conowingo, one of five hydroelectric facilities along the lower Susquehanna. But as part of the licensing process, Maryland has to issue a certification that the operation of the dam will maintain water quality standards.

Maryland issued that certification April 27, but imposed numerous conditions that it said were needed to mitigate water-quality impacts from the dam. Along with a requirement that Exelon fund pollution control practices to offset increased nutrient levels — which could cost the company up to $172 million a year — it called for new efforts that would keep debris from flowing downstream, manage river flows to protect nearby habitats, and make fish passage improvements beyond what the utility had already agreed to.

Exelon responded a month later by filing suit in state and federal courts charging that the state was placing an “unfair burden” on the utility by imposing a financial requirement that it contended was “orders of magnitude” more than the dam was worth.

Its suit in state court was later dismissed, but the federal litigation is still pending.

In his presentation to the commission, Mike Pedone, a senior policy adviser with the Maryland Department of the Environment, said the state was simply fulfilling its responsibility under the law when it issued a certification requiring that Exelon take actions to ensure its operations would protect water quality in the area.

Pedone said the dam caused a host of impacts that have “fundamentally altered” both the river and the Bay. He argued that, in addition to impacting Bay water quality from nutrient and sediment pollution, it has blocked migratory fish such as shad, herring and eels; altered river flow in a way that harms downstream habitats; and promoted growth of algae blooms that could impact drinking water supplies.

The state’s water quality certification, Pedone said, fulfills its obligation to outline the actions required to offset those impacts and ensure that water quality standards would be met.

“This is a once-in-a-generation opportunity,” Pedone said, noting that Exelon is seeking a 46-year license. “That means the next time that it comes up for renewal, everybody in this room will be retired or dead. So what we do today, or don’t do today, is going to have some very long-term consequences.”

He disputed the utility’s stance that it could not afford to fix the problems. The dam had operated for 90 years generating profits for its various owners during that time, but Pedone contended they had only reinvested a “small portion” of that money to mitigate environmental impacts.

“Is the water quality certification going to bankrupt Conowingo?” he asked. “I don’t think so.”

Pedone also questioned Exelon’s contention that the certification would cost the utility more than the dam is worth, noting that Conowingo is intricately tied to two nearby facilities that it also owns.

Both the Peach Bottom Atomic Power Station and the Muddy Run Pumped Storage Station require water from the dam’s reservoir to operate, and both are more profitable than Conowingo, he said. “So,” Pedone added, “I would suggest the viability of Conowingo depends not solely on its profitability, but the profitability of all three of these facilitates taken together.”

In her presentation, Kathleen Barron, Exelon’s senior vice president for government and regulatory affairs and public policy, argued that the state had gone beyond its authority with its requirements for Conowingo, which she said was also the state’s largest producer of renewable electricity.

Under the law, she said, a dam owner is responsible for discharges “added by the operator” but not for pollution that originates upstream, as is the case with the nutrients and sediment at Conowingo.

“The law just simply does not require the dam sitting in the middle of the river to be the one that is required to reduce those pollutants, given that it is not the entity that is putting the pollutants into the water,” she said.

Similarly, she said, Exelon cannot remove “all visible debris” from the river as it passes through the dam, as the state has requested. While it removes accumulated trash weekly, she said refuse cannot be safely collected during periods of extreme flows, like those that frequently took place last year.

Barron said that, by trapping sediment and nutrients, the dam has benefitted the Bay by preventing pollution from flowing downstream for most of its existence. And, she contended, it still helps in that regard. Although its reservoir is essentially full, it continues to trap some portion of nutrients for a short period of time, allowing them to degrade and making them less harmful when washed downstream.

Barron said the utility had already committed more than $300 million toward future environmental projects during the life of the new license, much of it related to resolving fish passage issues at the dam. But, she said, meeting Maryland’s requirements in the water quality certification could cost $15 billion.

Both sides indicated they would welcome negotiations to resolve the issues. But by late February, a spokeswoman for Exelon said no talks had taken place.

Meanwhile, the EPA in February requested applications from entities interested in developing a plan to offset the increase in nitrogen and phosphorus pollution making its way past the dam’s reservoir.

That entity would be in charge of overseeing the creation of a watershed implementation plan — similar to those being developed by states to meet their Bay nutrient reduction obligations — that would identify needed actions to reduce or offset the increased pollution.

The entity would also develop a strategy for funding the cleanup actions, identify new sources of revenue and potentially develop new public-private partnerships to get the job done.

“This has the opportunity to actually spur some innovation, create some innovative financing, maybe bring more money to solve this challenging problem,” said Matt Rowe, assistant director of the MDE’s Water and Science Administration and a member of the Bay Program committee working on the Conowingo issue.

The EPA’s request does not mention Exelon, but Maryland officials have said they anticipate any settlement with the utility would help fund implementation of the plan.

Meanwhile, in the state General Assembly, a group of lawmakers introduced legislation in February that would require Exelon to pay for at least 25 percent of the cost associated with the Conowingo watershed implementation plan.