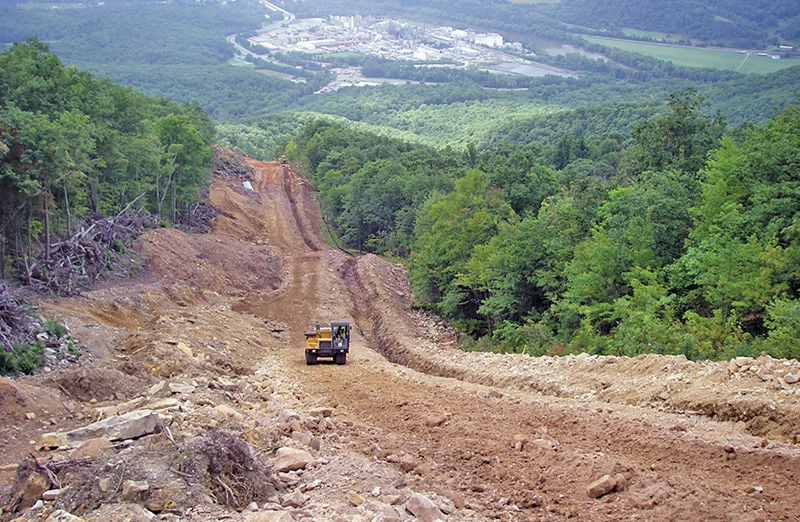 This photo shows the land clearing done during construction of a 12-inch gas pipeline in 2014. The Atlantic Coast Pipeline would have a 42-inch pipeline for much of its length. (Dominion Pipeline Monitoring Coalition)

One of the federal permits required to build the Atlantic Coast Pipeline through three states and a portion of the Chesapeake Bay watershed was rendered invalid late Tuesday by a federal appellate court.

Environmental groups say the decision should completely halt the pipeline’s construction, at least temporarily, but Dominion Energy, which is backing the project, disagrees.

The permit from the U.S. Fish and Wildlife Service allowed for the construction of the 600-mile pipeline to result in the “incidental take” of certain threatened or endangered species, but the U.S. Fourth Circuit Court of Appeals ruled this week that the permit did not provide specific limits that could be enforced or monitored.

The case was brought by the Sierra Club, Defenders of Wildlife and Virginia Wilderness Committee and argued by Southern Environmental Law Center, whose lawyers contend that the decision  means all construction on the pipeline must stop because this permit is the basis for several others.

"Like other agencies, the Fish and Wildlife Service rushed this pipeline approval through under intense political pressure to meet developers’ timelines,” D.J. Gerken, managing attorney of SELC’s Asheville, NC, office, wrote in a statement. “It's foolish and shortsighted to risk losing rare species for an unnecessary and costly pipeline boondoggle.”

But Jen Kostyniuk, a spokeswoman for Dominion Energy said the court’s decision prevents construction from continuing only on portions of the project.

“This decision only impacts activities directly covered by the Incidental Take Statement in certain defined areas along the route,” Kostyniuk wrote in an emailed statement. “We remain confident in the project approvals, and the ACP will continue to move forward with construction as scheduled.”

The court’s brief order does not make the impact of the decision clear but mentions that a longer opinion is forthcoming. The order states that the incidental take permit mentions how the project could impact five threatened or endangered species along the pipeline’s route, but that its details are “so indeterminate” that they could not be easily enforced or monitored.

The lawsuit is one of several legal challenges facing the sprawling pipeline project at both federal and state levels. The pipeline’s path begins in West Virginia, cuts through the middle of Virginia and continues through Eastern North Carolina, delivering natural gas from hydraulic fracturing operations in Pennsylvania and West Virginia.

In Virginia — where the pipeline would wind through portions of the Chesapeake Bay watershed — the State Water Control Board decided in April to open the pipeline project to another public comment period.

The board is seeking public input on whether additional permits should be required for each of the project’s stream crossings to ensure water quality is protected. In addition to the “blanket” permit from the U.S. Army Corps of Engineers required for utility lines that cross waterways, the board — consisting of governor-appointed citizen members under the umbrella of the Virginia Department of Environmental Quality — could require additional certifications for each stream crossing under Section 401 of the Clean Water Act.

That comment period closes May 30. The board also approved late last year another project to build the Mountain Valley Pipeline across the southwest corner of the state, where construction has begun.

Last year, about 20,000 public comments poured in about the projects, and hundreds of people attended public meetings largely to oppose their construction. But DEQ officials contended they did not have the regulatory authority to recommend that the board deny permits for the projects, which had already received federal approval.