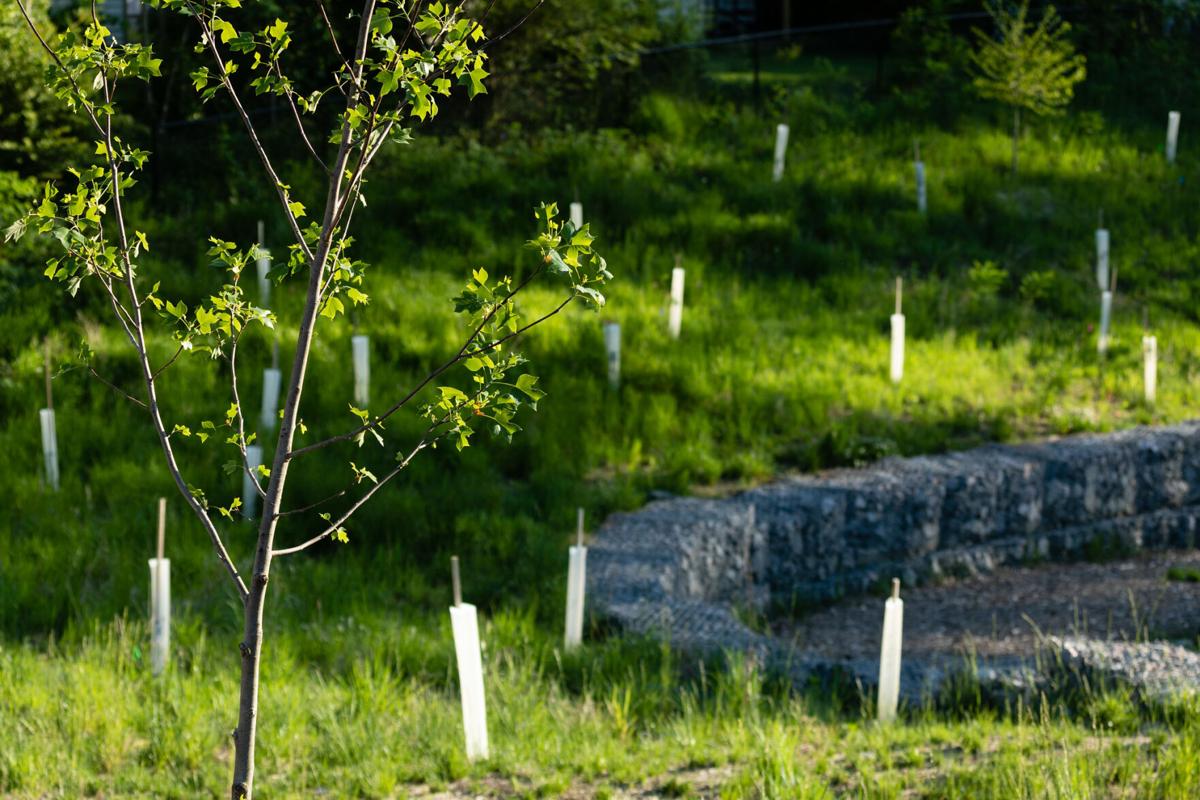 Tree plantings and stormwater conveyance systems are part of a broad-based partnership effort to establish and connect greenways and blueways in Virginia's Appomattox River corridor. Pictured here is a tree planting at Riverside Park Greenway in Hopewell. Efforts are underway in both Maryland and Virginia to increase tree plantings, especially in underserved areas. 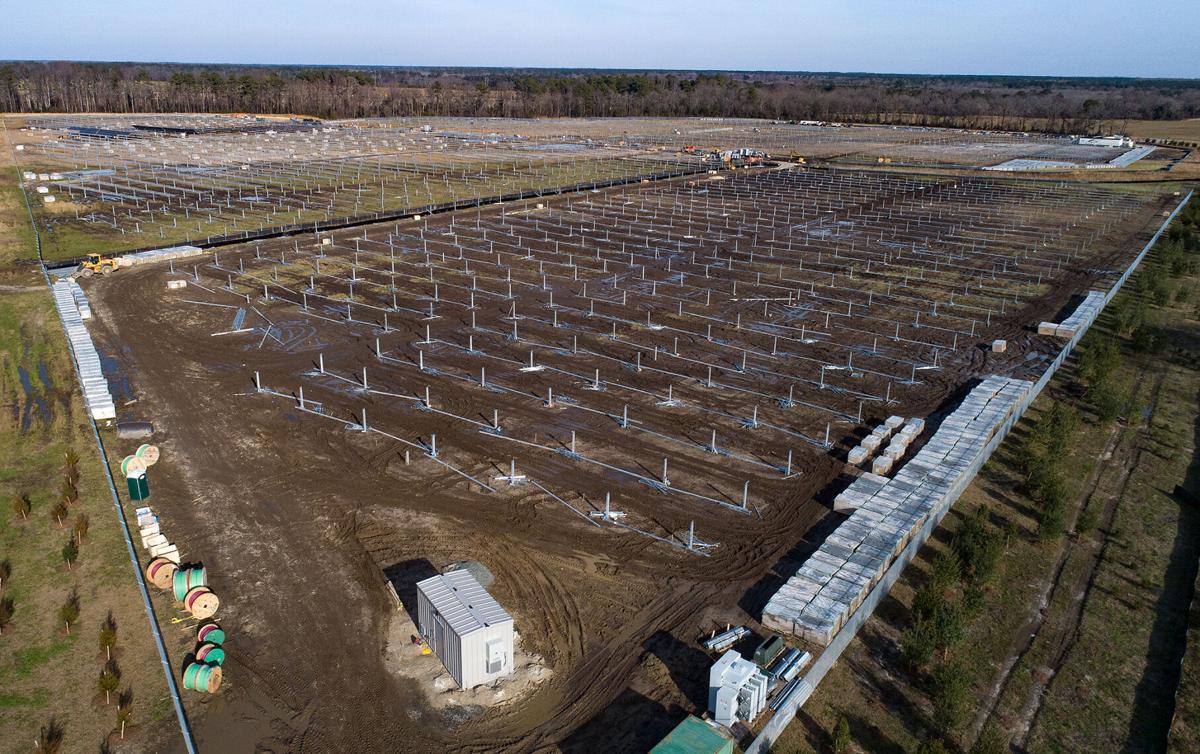 A large solar array is under construction on former farmland near Hurlock, MD. Both Maryland and Pennsylvania are considering action that would increase solar power in their states. 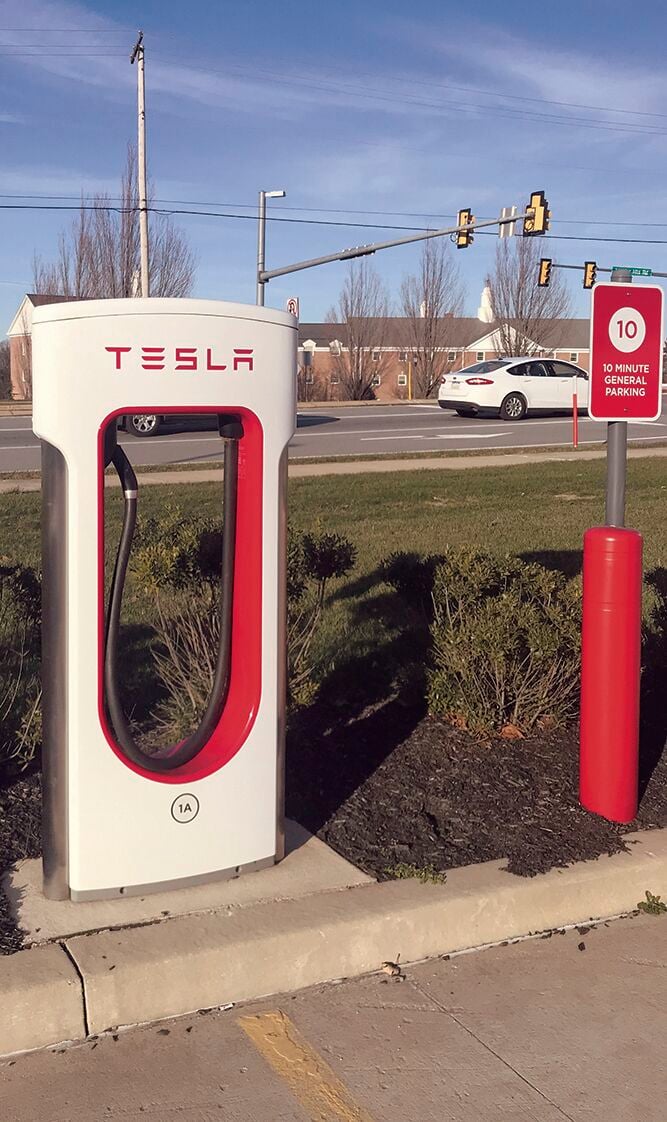 An effort is underway to increase the number of electric car charging stations in Pennsylvania. Meanwhile, a bill in Maryland would commit the state to convert its vehicle fleet to electric power.

Fighting climate change, planting more trees and funding environmental progress in tight times will be among the challenges confronting state lawmakers in Maryland, Virginia and Pennsylvania when they gather in January in their respective capitals.

The 2021 legislative sessions will open as last year’s ended, under the shadow of a coronavirus pandemic that eviscerated state budgets — and even sent Maryland lawmakers home early with many bills still awaiting action.

As a result, green groups have trimmed their legislative wish lists to focus on a handful of priorities. Common among all three states is a campaign for more funding — or, in Pennsylvania, at least, fewer funding cuts — to advance the Chesapeake Bay restoration and other environmental causes. Here is a rundown of key issues in each state.

After failing to get any climate bills passed in the COVID-shortened 2020 General Assembly, environmentalists are gearing up to redouble their efforts this year. The Climate Solutions Now Act is the biggest of just a handful of bills they’re pushing, given a looming budget deficit and other major issues facing lawmakers — not to mention uncertainty about whether the 90-day session, which begins Jan. 13, will again be disrupted by the pandemic.

“Who knows how long we’ve got?” asked Kim Coble, executive director of the Maryland League of Conservation Voters. “We went in with a slimmer list, intentionally.”

The bill would commit the state to convert its vehicle fleet to electric power, require solar panels on some new state buildings and beef up building codes to require greater energy efficiency.

“We’re calling for concrete action,” said Sen. Paul Pinsky, a Prince George’s County Democrat who is a chief sponsor of the bill. While Maryland has been in the vanguard of states addressing climate in the face of federal inaction, he said, “we think we have to push the envelope even more.”

Another provision in the climate bill could help clean up the Bay. It calls for planting 5 million trees statewide by 2030, in part by tapping unspent funds left from upgrading wastewater treatment plants.

“We would like to see some of the Bay restoration money [used] to help tie a bow on this program,” said Alison Prost, acting Maryland director of the Chesapeake Bay Foundation.

At least 10% of those trees would have to be planted in underserved communities, reflecting another emphasis of the legislation. The bill directs the state’s Commission on Environmental Justice and Sustainable Communities to see that overburdened, historically neglected communities get a fair share of the state’s climate investment.

Beyond that, activists plan another run at a statewide plastic bag ban. The House passed the bill last year, but it died in the Senate. They’re also planning a renewed push to increase funding for public transit, which is suffering from a $2 billion shortfall in maintenance.

Building on legislation passed in 2020 that barred the use of foam containing PFAS, or “forever chemicals” in fire-fighting training, activists are backing a bill that would further restrict use of the foam. It also would ban sales of rugs, carpets and food packaging containing the PFAS compounds, which have been found in the ground and surface water as well as fish and oysters in Maryland.

Pinsky also plans to introduce a bill to streamline permitting for solar energy projects, which he contends are being held up by objections to placing them on farmland. The state can’t achieve its ambitious goal of getting 14.5% of its energy from the sun just by placing solar panels on rooftops, he said.

“I think we can retain prime agricultural land … and do more clean energy,” he said.

Besides, legislators are facing a shorter work session — perhaps as little as 30 days. According to the state constitution, odd-numbered years have shorter sessions than even years. The General Assembly can extend it to 46 days. But that procedural vote requires a two-thirds majority, and Republicans have vowed to block it.

The legislature gavels into session Jan. 13.

Money is tighter than usual. The COVID-19 pandemic hit state coffers to the tune of $2.7 billion, a shortfall that lawmakers had to close during a marathon special session in the fall. Environmental groups say they anticipate spending most of their time this year trying to restore some of that lost funding.

The state Department of Conservation and Recreation estimates that $100 million a year is needed to help fund projects that prevent or slow pollution from stormwater running off farmland. Lawmakers have set aside $93 million for the cost-share program over two years, down from the $95 million allotted pre-pandemic.

Gov. Ralph Northam’s budget proposal in December offered some relief from the austerity, calling for a $13.5 million increase in the agricultural cost-share program. Boosting financial incentives to install conservation practices has paid off, for instance, by doubling over the last year the number of Virginia farmers who have installed fencing to keep their cattle away from streams and rivers.

Northam also is seeking to restore $12 million in funding to the Department of Environmental Quality to increase staff.

On the legislative front, the Bay Foundation is pushing for a law that would enable local governments to require developers to replant a higher percentage of tree canopy under certain circumstances. The provisions would apply to areas endangered by sea level rise and formerly “red-lined” communities, places where earlier banking policies reinforced segregation and blight.

The state’s oil and gas industry likely will find itself playing defense once again in Richmond. A proposal led by the advocacy group Appalachian Voices would require the state water control board's approval of more gas pipelines, including those as small as 24 inches in diameter.

Another lobbying push seeks to renew past sessions’ failed attempts to enact a temporary halt on new fossil-fuel projects, such as power plants and import and export terminals. The bill includes financial assistance for impacted workers.

In Pennsylvania, environmental groups will find themselves playing a lot of defense in 2021. After trying in vain for years to get lawmakers to increase funding for cleaning up the state's rivers and streams — and by extension, the Bay — this year they're fighting to keep from losing still more funding.

In the waning weeks of 2020, the Republican-controlled legislature cut budgets for the state departments of Environmental Protection as well as Conservation and Natural Resources, which oversees state parks and forests. Plus, funds to operate the state’s recycling programs were all but gutted to plug massive gaps in the state budget.

But after hard lobbying, two centerpiece funds for parks, preserved farmland and open space were spared. For now.

“I think we’re going to have to fight off people trying to take the money again,” remarked Ezra Thrush of PennFuture, an environmental group.

Reducing tax funds that underwrite trails and parks couldn’t come at a worse time, with Pennsylvanians needing the outdoors more than ever because of COVID-19, said John Walliser of the Pennsylvania Environmental Council.

“We want to amplify the recreation economy in Pennsylvania. It hit home this year when those kinds of places have been one of the few refuges for folks,” Walliser said.

Groups also are combining forces to ward off the proposed easing of rules governing oil and gas extraction. Gov. Tom Wolf vetoed one such rollback bill that the General Assembly passed.

Other efforts will be directed toward turning back efforts to stop Pennsylvania from joining 10 other states in the Regional Greenhouse Gas Initiative to fight climate change.

Wolf issued an executive order in 2019 to join RGGI and its market-based approach to reducing greenhouse gas emissions from power plants. The state is undergoing public hearings to formally advance rulemaking, but the legislature has tried to throw multiple roadblocks in the way.

In September, Wolf vetoed a bill that would have prohibited the state’s regulatory agency from taking any action to control carbon dioxide emissions without legislative approval.

A community solar bill to allow groups to finance and build midsize solar projects in rural areas, especially on farms, has more than 100 Republican and Democratic co-sponsors. It also has broad backing from the Pennsylvania Farm Bureau and the Edison Electric Institute, which represents investor-owned electric companies in the United States.

But the effort fell victim to a committee chair who wouldn’t put the bill to a vote. Supporters are hoping the legislator will be reassigned to another committee, and the bill is expected to be re-introduced early in 2021. Backers have pushed the bill as badly needed financial help for struggling farmers. Projects would be designed to allow grazing animals or certain crops under panels and land could be returned to farming later. Anyone could help bank a solar project and get a reduced electric bill as a result. A Penn State study found there were 235 shovel-ready solar projects in 48 counties lined up, worth almost $2 billion in investments.

A bill to prevent overuse of lawn fertilizer will likely be re-introduced for a 10th year in 2021 after getting close to a vote in 2020.

Other efforts will include: a new program to provide grants for on-farm conservation measures through county conservation districts, though it did not identify any funding source; more charging stations to encourage electric vehicles; raising the amount of renewable electricity mandated by the state’s alternative energy portfolio; and continuing federal aid to reclaim abandoned mine lands.