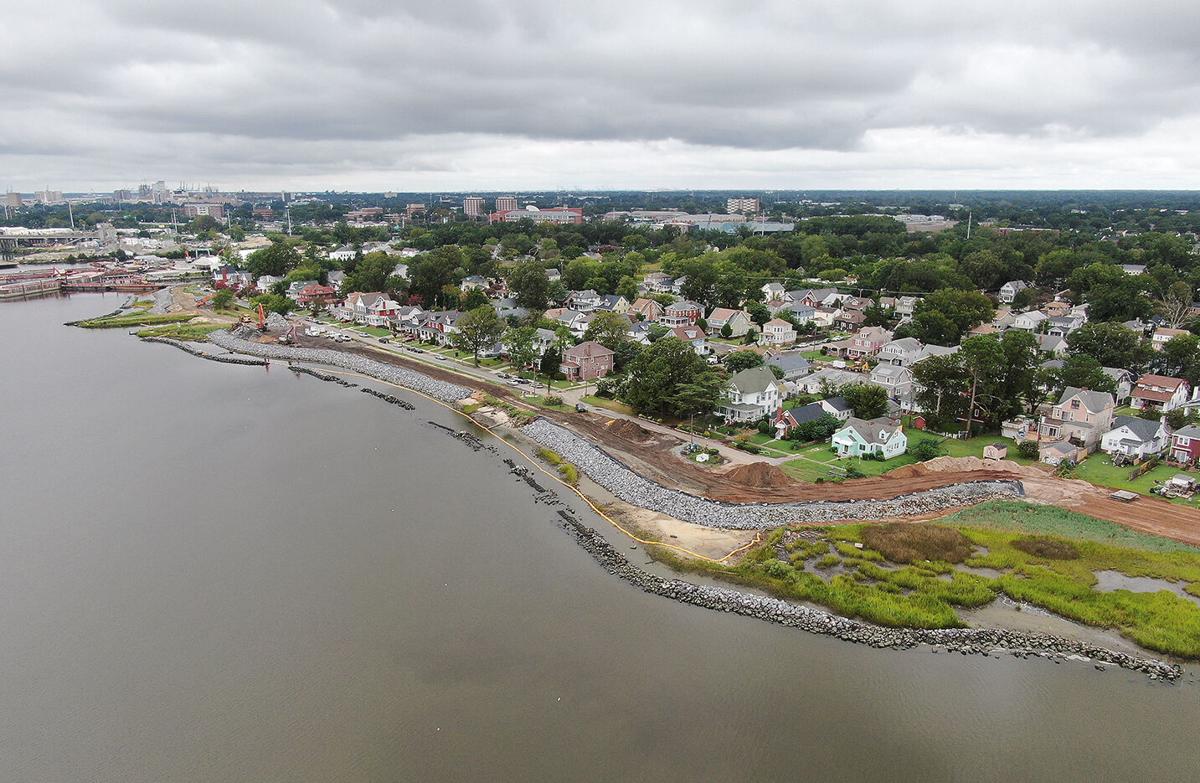 A floodwall is being built in Norfolk to shield the Chesterfield Heights and Grandy Village neighborhoods from tidal flooding along the Elizabeth River’s Eastern Branch. (Courtesy of the city of Norfolk) 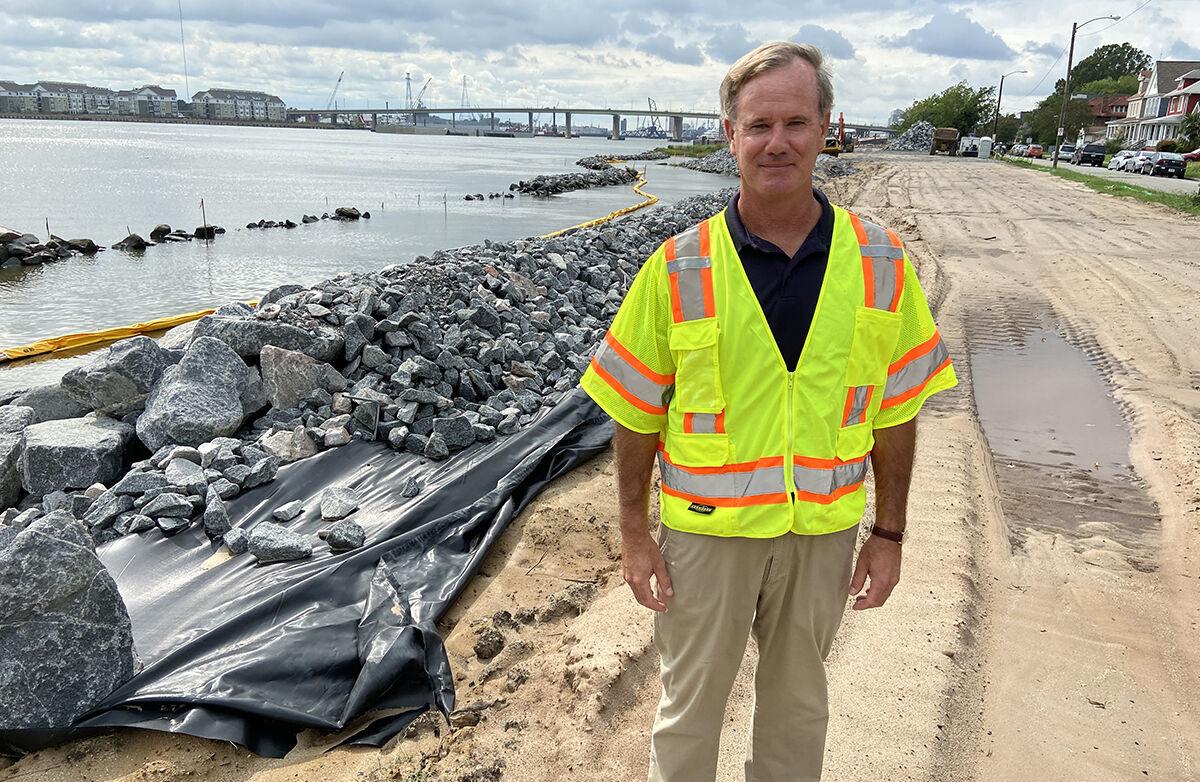 Doug Beaver, Norfolk’s chief resilience officer, says the massive flood-protection project is on track to be “substantially complete” by the September 2022 federal deadline.

Seas are rising. The land is sinking. And hurricanes seem to pose a greater threat with every passing season.

In many ways, the city of Norfolk is racing against time to complete a massive flood-protection project for a pair of its most vulnerable neighborhoods. But city officials and contractors are most concerned about a different kind of threat: a make-or-break September 2022 deadline.

If Virginia’s second-largest city doesn’t “substantially complete” the work by then, officials say they will have to return the $112 million grant they received from the federal government.

Nine months after construction began, the project is on pace to meet that target, said Doug Beaver, who oversees the work as Norfolk’s chief resilience officer. Some finishing touches will remain. The final tweaks are scheduled to be wrapped up by April 2023.

But the city is hedging its bets just the same. Local leaders are lobbying members of Congress to extend the 2022 deadline.

Bills introduced in the U.S. House and Senate this summer would give Norfolk until September 2025 to finish the work. The measures have bipartisan support but have stalled amid election-year political battles. The reprieve would apply to all 13 state and local governments nationwide that received money from the same $1 billion pool of Housing and Urban Development funding in 2016.

“We’re a lot further along than most localities,” Beaver said, “but who would have predicted a pandemic or 26 named storms” would form in the Atlantic this season?

The setting for this bureaucratic drama is two historically black neighborhoods: the Chesterfield Heights community and the 300-unit Grandy Village public housing complex. The neighborhoods lie just east of downtown, squeezed between Interstate 264 to the north and the Elizabeth River’s Eastern Branch to the south.

The area’s 2,000 residents have long been plagued by floods from heavy rainfall and extremely high tides. Public safety is one of the top concerns. Water routinely covers one of the two access roads, slowing the arrival of ambulances and other first responders, officials say.

The city’s plan calls for building walls to keep tidal flooding out — 7,000 feet of earthen berms and 1,000 feet of floodwalls. Workers are constructing two pump stations to get rid of water that collects behind the walls. Excess water also will be allowed to pool in new wetlands and a grassy amenity dubbed “Resilience Park.”

After New Orleans, Norfolk is widely considered the city most endangered by sea level rise nationally, Beaver said. Water levels have risen by 18 inches over the last century and are forecast to climb another 4.5 feet by 2100, according guidelines adopted by the Hampton Roads Planning District Commission. Sea level rise in the area is accelerating at nearly twice the global average, scientists say, because the region’s land surface has also been sinking since the last Ice Age.

As the first major infrastructure project to combat climate change effects in Hampton Roads, the Chesterfield Heights and Grandy Village construction is serving as a living experiment, Beaver said.

“This will be a shining example of what we need to do to adapt as coastal communities,” said Beaver, a former Naval Station Norfolk commander and city military liaison. “A lot of these homes [in Chesterfield] are 100 years old, and we want them to be here for another 100 years.”

The huge public works venture has upended both neighborhoods. Barricades block roads shorn of their asphalt. Bare cinder blocks suggest the outline, if not the height, of the pump stations. A ribbon of gray boulders — the floodwall — is unfurling down the shoreline. Front loaders and backhoes crowd the landscape.

The project is taking shape, but not the way it was originally designed.

After paying for planning and engineering work, the city had about $90 million remaining for construction. But as city officials sought bids on the lucrative project last year, they ran headlong into fierce competition. With two separate highway tunnel projects vying for the same workforce and materials, the construction cost soared to $130 million.

“So, we went back to the drawings and decided what we could change” without diminishing the project’s flood-fighting capacity, said Selo Qejvani, the city’s project construction manager.

Nearly $4 million in savings came from scaling back the pump stations, he said. One pump was eliminated from each of the stations. Those pumps were only added to handle lighter rains, saving the larger pumps for bigger jobs.

Engineers also removed the pilings that would have been driven 80 feet into the ground to keep the stations secure during strong winds. Their subtraction shouldn’t compromise the stations’ structural integrity, Qejvani said.

Significant savings came when officials slashed the project’s contingency fund and allowances, a kind of rainy day account for unexpected costs, from $18.5 million to $10 million. As the design crystallized, Qejvani said, he and his colleagues felt more comfortable about what needed to be spent — and what didn’t.

Other deletions included a pedestrian bridge, kiosks, additional lighting at the pump stations, several driveway replacements and several bioswales in the park.

Despite the cuts, the city still faced a nearly $10 million shortfall. That will be covered by other funding sources: $5 million from federal Community Development Block Grants reprogrammed from other projects and $4.5 million from the city’s “resilience” tax.

The city managed to wrangle the project’s costs but lost time in the process. The project broke ground last February, seven months behind the original schedule.  “It’s tied to a very tight timeline,” Beaver said.

Henry Penn, a retired county administration worker, said he moved to Chesterfield Heights about a decade ago for three main reasons.

His home is on high enough ground that he doesn’t worry too much about it getting inundated, but he’s happy that the project will give some relief to his neighbors. Will it be enough to protect the community in the long run from climate change? That, he isn’t so sure about.

“They just talked about another big ice chunk that broke off up there” in Greenland, Penn said from his front porch as he watched the river ripple serenely past. “So, I don’t know if it will be enough or not. If it [sea level] rises 6–10 feet here, it’s devastating.”