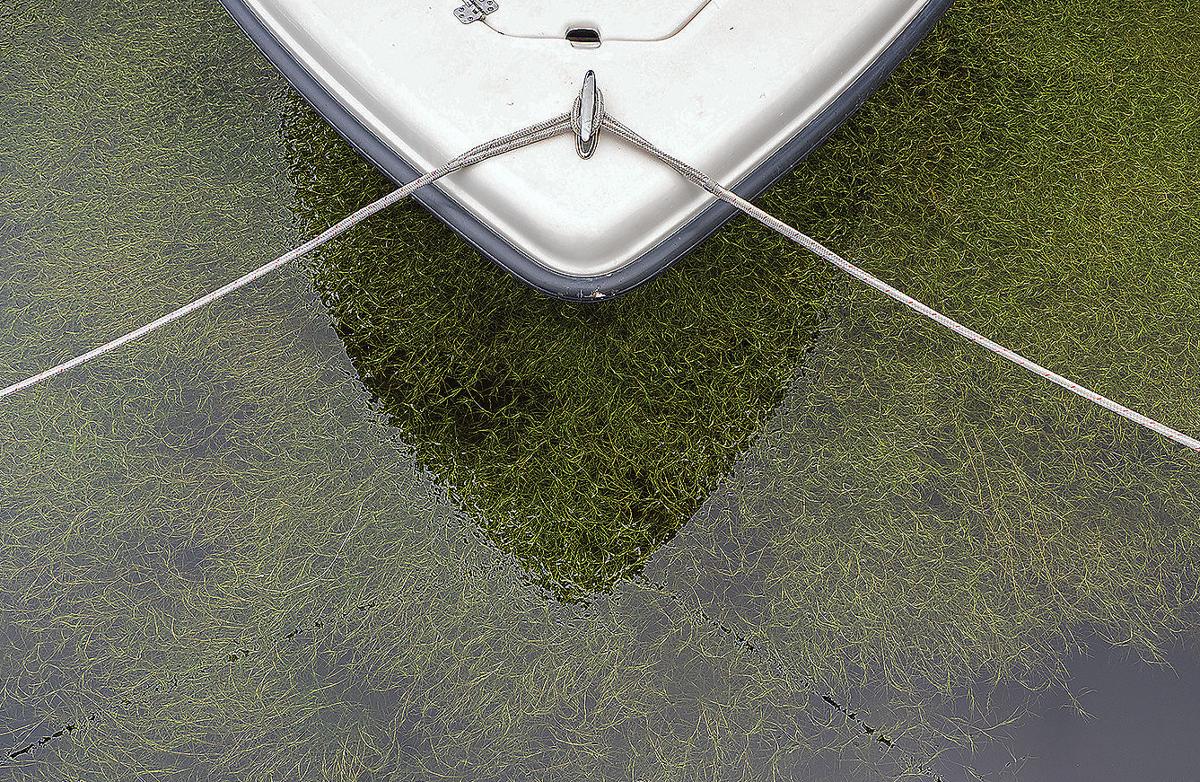 Most underwater grasses didn’t fare as well in 2019 as this horned pondweed, which surrounds a boat in a tributary to the Tred Avon River in Maryland. 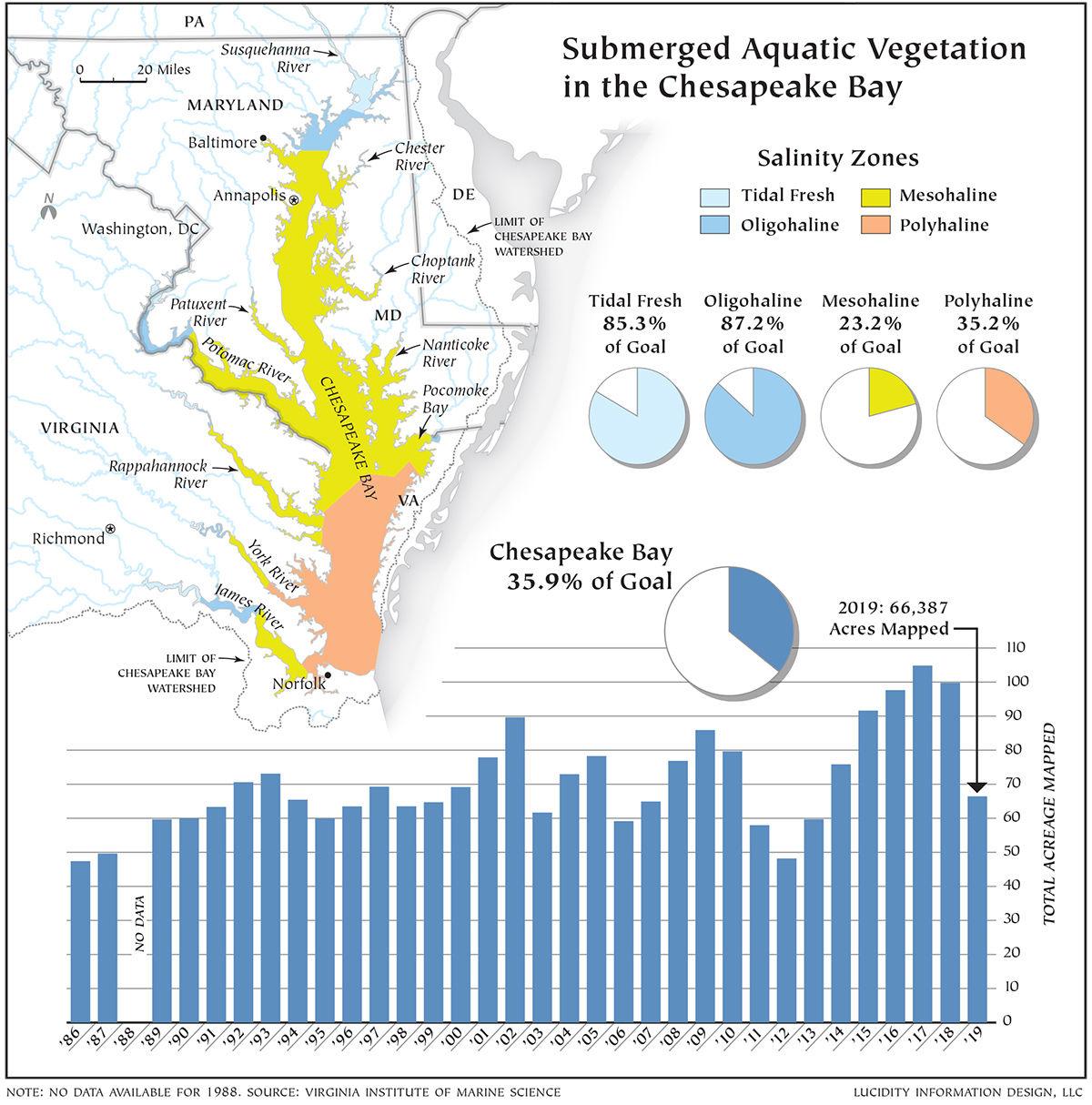 But the declines were not uniform throughout the Bay. Underwater grass beds in many fresh and low-salinity areas of the Chesapeake and its tidal tributaries held their own, while beds in mid– and high-salinity areas suffered the brunt of the impact.

“We see a lot of little losses in a lot of places, and little gains in a lot of places,” said Christopher Patrick, assistant professor of biology at the Virginia Institute of Marine Science, which conducts the annual aerial survey of the Bay’s grass beds. “And then we’ve had a couple places that just had a really bad year.”

The Bay lost a bit more than 34,986 acres of submerged aquatic vegetation, or SAV, erasing nearly a third of the plants from the shallow waters around the Bay.

The loss was probably larger, scientists say, but it wasn’t fully documented: Bad weather kept them from completing the survey in 2018.

“The significant loss of Bay grasses this year is a sobering reminder that the Chesapeake Bay is still a system dangerously out of balance,” said Beth McGee, a scientist with the Chesapeake Bay Foundation. “The extreme flows of polluted runoff that damaged the grasses are also a clear sign that climate change is threatening the Bay’s recovery. This setback should be a wakeup call that climate change and increasing pollution cannot be ignored.”

Grasses are considered one of the most important indicators of Bay health because they require clear water to survive. Chesapeake nutrient reduction goals are aimed at improving water clarity enough to reach the underwater grass restoration acreage target.

Still, scientists feared the loss could have been even greater. According to the U.S. Geological Survey, 2019 had the highest volume of river flows since the monitoring of river flows into the Bay began in 1937.

High freshwater flows are typically bad news for underwater grasses. They carry large amounts of sediment that can smother beds and cloud the water. They also flood the Bay with nutrients that are flushed off the land, spurring algae blooms that block critical sunlight.

Surprisingly, grass beds in fresh and low-salinity areas of the Bay — areas that receive the full force of river flows entering the Chesapeake — generally held their own or even expanded.

The Anacostia River, parts of the upper tidal Rappahannock River, Mattawoman Creek and the upper Potomac River were among those seeing significant gains. The Susquehanna Flats, now the largest bed in the Chesapeake, held steady despite high flows coming from the Bay’s largest tributary.

“It looked good,” said Cassie Gurbisz, an assistant professor of environmental studies at St. Mary’s College in Maryland, who has been working on the Susquehanna Flats for years. “The water was clear. It looked pretty much like it always looks.”

Scientists said the nature of the flows during 2019 may have helped the beds survive. Normally, high-flow years are associated with hurricanes or tropical storms that send a deluge of water downstream. In 2011, the flood of water that poured into the Bay from the Susquehanna after Tropical Storm Lee literally ripped apart grass beds on the flats.

“When you get super high flows you can get scouring, but we don’t know what the threshold needs to be in order to get scouring,” Gurbisz said. Last year’s flows appeared to have been well under that threshold.

Many freshwater species of grasses also form canopies. That is, their leaves brush the surface of the water, which allows them to absorb sunlight even if the water turns murky.

The story was dramatically different in the mid– and high-salinity areas that dominate most of the Bay and contain most of its potential underwater grass habitat.

Huge grass beds in Tangier Sound lost more than two-thirds of their grass coverage, accounting for almost half of the Baywide loss. Other large beds in the Honga River on the Eastern Shore were cut by more than half.

The mesohaline is dominated by widgeon grass, a species that is notorious for its boom-and-bust characteristics, disappearing quickly when conditions are poor, but bouncing back rapidly when they improve.

“It just blows us away that we see such dramatic changes in widgeon grass,” said Bob Orth, a VIMS scientist who has overseen the annual survey since it began in 1984. “This happens in other areas, too. It’s not just the Chesapeake.”

Part of the problem, scientists say, is that beds in those regions used to also include multiple other species, such as eelgrass, redhead grass and sago pondweed. The presence of several more durable species likely helped buffer the impacts of a bad year.

They point out that parts of the mesohaline, such as the Chester, Severn and Magothy rivers in Maryland, had notable increases last year. But the widgeon grass there is mixed with other species

“What we’ve seen in those areas is that they are really increasing in diversity,” said Brooke Landry, a biologist with the Maryland Department of Natural Resources and chair of the Bay Program’s SAV Workgroup. “So maybe these areas aren’t as susceptible to these changes like big monospecific stands of widgeon grass would be.”

But in other mid-salinity areas, those other species largely disappeared after Tropical Storm Agnes devastated the Bay’s grasses in 1972. They haven’t come back.

Also hard-hit was the very salty polyhaline region in the Lower Bay, which lost 35% of its grasses.

Grass coverage in that region has been trending downward since the mid-1990s, and the roughly 11,800 acres observed last year is approaching the all-time low mapped in 2006.

The polyhaline is dominated by eelgrass, which is near the southern edge of its range in the Chesapeake. It suffered a double hit — the grass does not tolerate warm temperature, and both 2018 and 2019 were unusually warm. Also, eelgrass requires more light than most other underwater grasses, so it was further stressed by murky water that persisted through much of those years.

The higher than normal flows and warmer temperatures — both predicted to continue as the climate changes — suggest that eelgrass may eventually disappear from the Bay. This was the third time since 2005 that eelgrass has suffered a large dieback after unusually warm weather.

“We were hoping to get to a point where water clarity had improved enough that eelgrass might withstand the added stress of that increased temperature,” Landry said. “But it clearly hasn’t impacted water clarity enough at this point to counteract the unpredictability of climate impacts and climate change. I think that is the story.”

Underwater grass beds are important food for waterfowl, as well as hiding areas for juvenile blue crabs and many types of fish. They are also a critical component of the ecosystem in their own right, pumping oxygen into the water, trapping sediment and buffering shorelines from the erosive impact of waves.

No one knows how much underwater grass was once in the Chesapeake. Some think there may have been up to 600,000 acres.