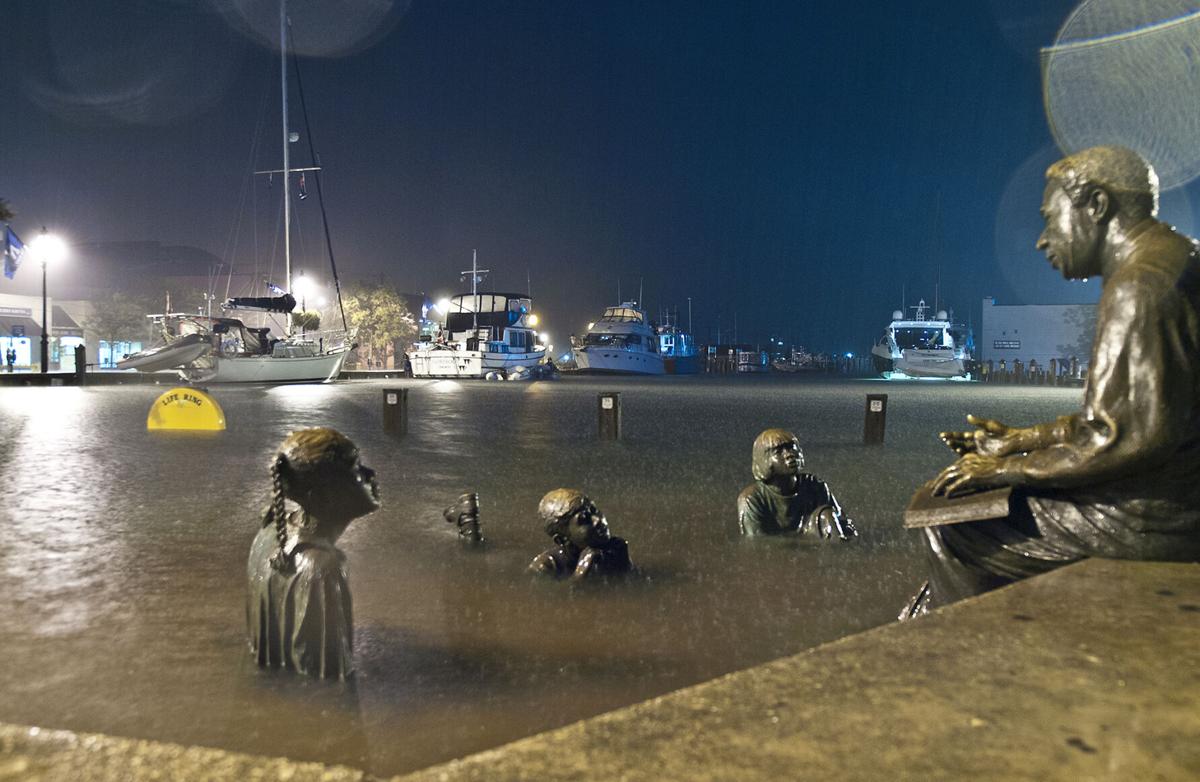 Floodwaters swamp the bronze figures of the Kunta Kinte-Alex Haley Memorial, installed in 1999 at the head of the Annapolis boat basin known as Ego Alley. 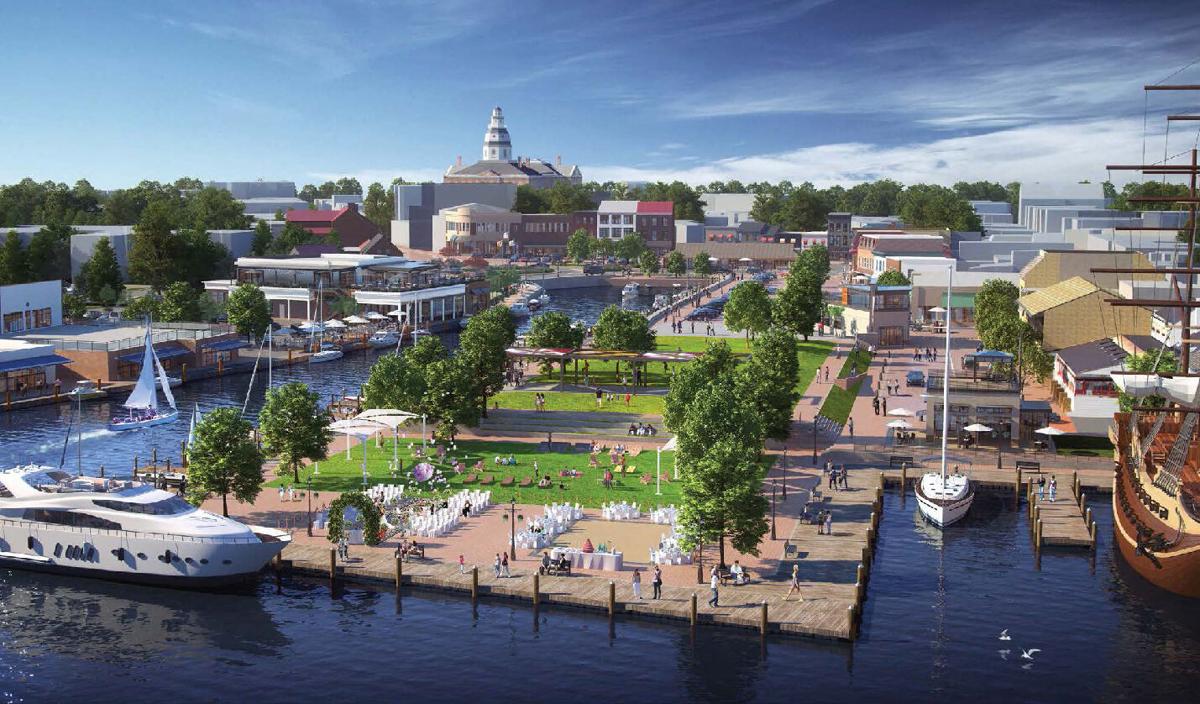 This conceptual illustration shows how a flood resilience project could transform the Annapolis City Dock, a popular gathering place for both tourists and local residents. 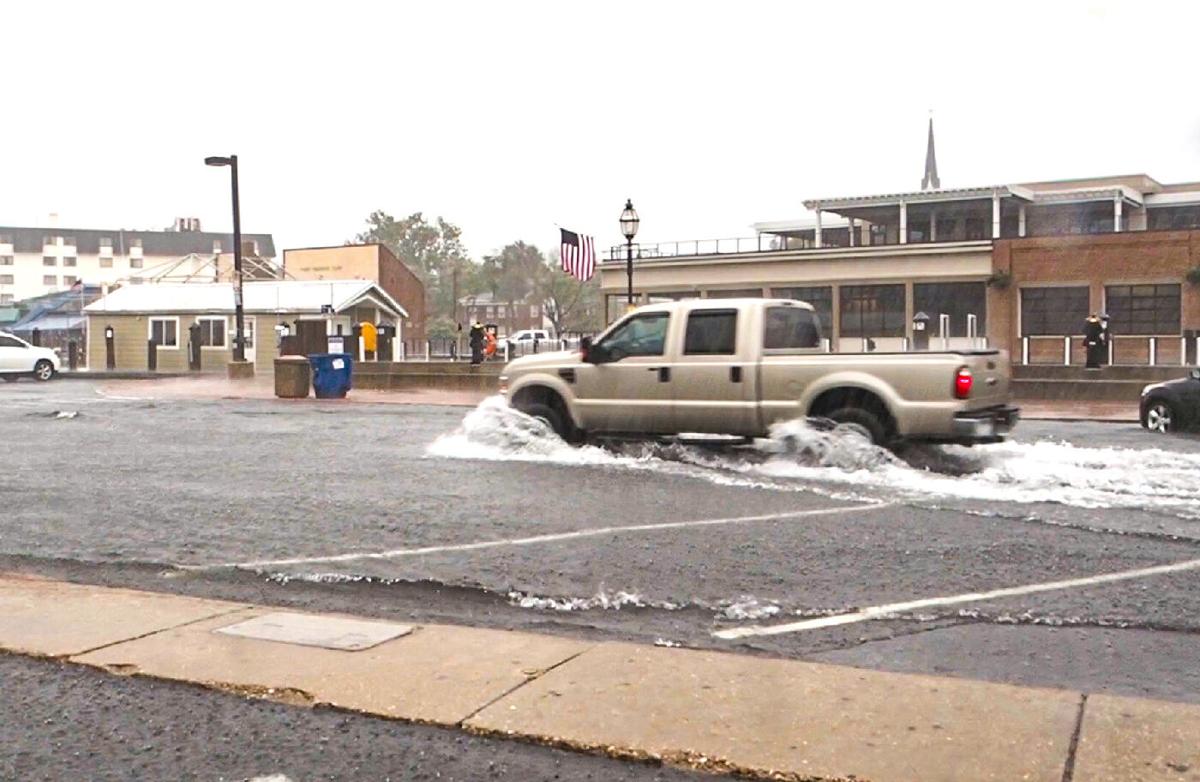 Cars slog through floodwaters on Annapolis’s Compromise Street near City Dock in 2020 — a scene that now occurs 50–60 times per year, compared with three or four times a year just half a century ago. 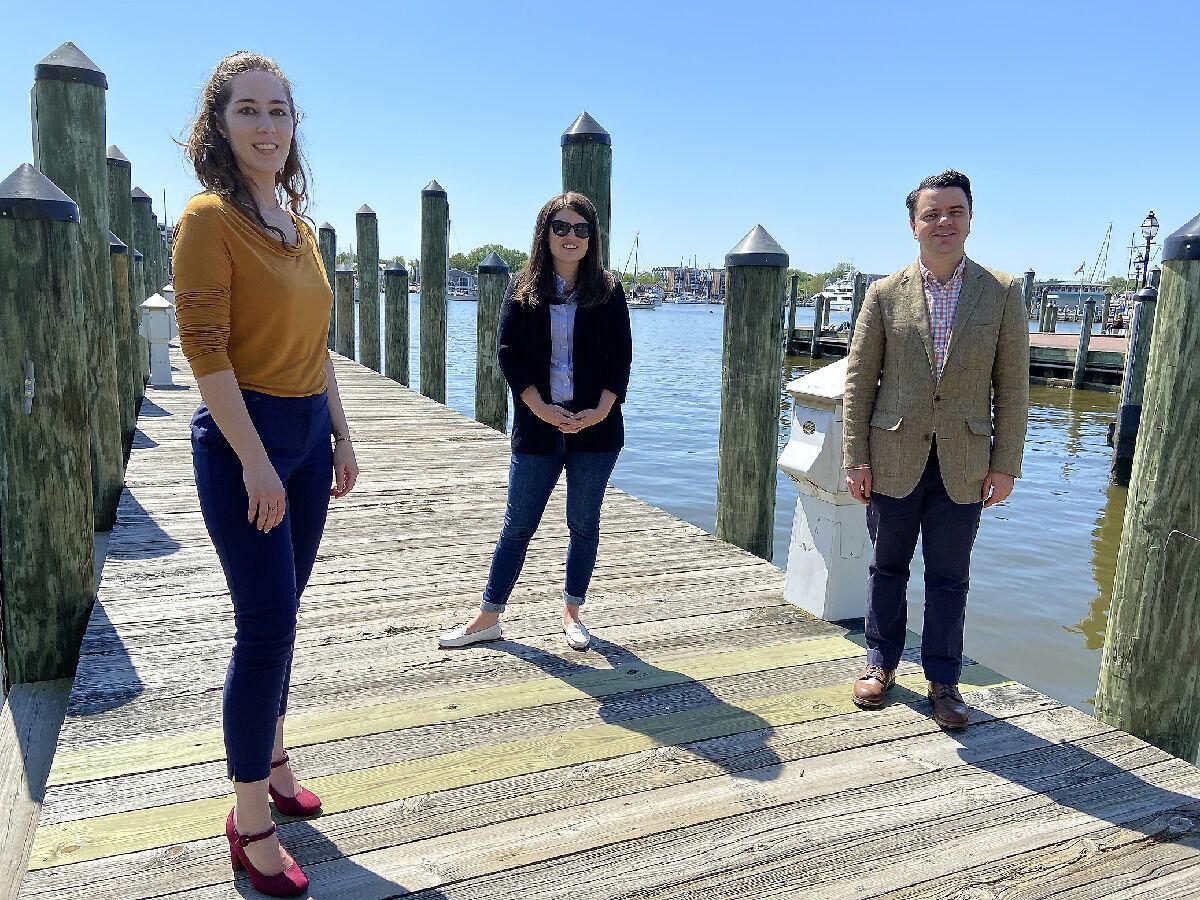 One of Maryland’s most recognizable waterfront townscapes is getting harder to see. Portions of the Annapolis City Dock are underwater 50–60 days a year, up from three to four days a year a half-century ago.

The culprit: Local tidal conditions, driven by one of the fastest growing rates of sea level rise in the country.

The solution: An ambitious $50 million project that would provide additional flood protection immediately adjacent to the town’s long, narrow boat basin off Spa Creek (known locally as Ego Alley). A combination of raising the dock walkway, building a new flood wall and installing a retractable or transparent barrier would provide a total of 8 feet of protection above the current sea level.

Backflow preventers will be installed at storm outfalls, blocking water from the Chesapeake Bay from gushing upward through street drains. The asphalt parking lot that becomes a giant bathtub during major floods will be transformed into a grassy park, with parking transferred to a rebuilt garage nearby.

“What’s happening here is not just a pilot for Maryland but also a demonstration project for the rest of the country,” said Nicholas Redding, president and CEO of Preservation Maryland, a nonprofit group collaborating to save a historic building, called Burtis House, across the parking area from Ego Alley. “Anywhere you go in the world, historic resources sit at the water’s edge. So, we have to figure out ways to protect those resources, particularly those affected by an ever-changing climate and sea level rise.”

Climate change forecasts suggest that, without action, the City Dock will be inundated almost every day by 2080.

The plan isn’t the first to take on stubborn flooding problems in downtown Annapolis. More than a half-dozen studies have been conducted during the past three decades. Some led to patchwork fixes. Others were strangled in their bureaucratic cradles for lack of funding or political support.

Why might this time be different? The most common answer given by the project’s backers is that it can’t wait any longer.

“There’s a sense of urgency,” said Eileen Fogarty, the land use expert and city planning professional who co-chairs the City Dock Action Committee. “The flooding is up to 52 days a year. Something has to be done.”

That air of resolve led to the committee’s formation in March 2019. The group of nearly 100 community members emerged seven months later with the most comprehensive plan yet to revitalize the area, weighing in at 122 pages.

There is now a January 2022 target for the start of construction, beginning with replacing and enlarging a nearby parking garage to accommodate vehicles displaced from the dock’s surface lot. The target date for completing the entire project is March 2024.

Unlike its predecessors, this flood-protection project is shaping up to be backed with real dollars — though it took some adroit legislative maneuvering just a few blocks uphill, beneath the state’s capitol dome.

State Sen. Sarah K. Elfreth, D-Anne Arundel County, sponsored a bill in the 2020 session that enables cities and counties to establish finance authorities for climate resilience projects. Now a law, it allows those authorities to borrow money for infrastructure projects through municipal bonds. The city of Annapolis and Anne Arundel County are in talks to jointly launch the first such authority in the state for the City Dock project.

If not for the resilience authority, the city likely would have needed to save the money to fund the entire project before a single shovel could go into the ground, a process that could have taken years, Elfreth said. The city is prohibited from borrowing against future revenues unless that money is coming from a dedicated source, such as a resilience authority.

With the cost of building materials soaring as world economies awaken from their COVID-induced dormancy, city officials fully expect the price tag to surpass the $50 million estimate.

After the resilience authority is set up, it will perform a study of potential revenue sources to pay off the debt created by the projects, said City Manager David Jarrell. For example, the hotel tax might be increased slightly. The authority would make recommendations to the city and county for approval by each governmental body.

Flooding is already hurting business near the City Dock, research shows. A 2019 study led by Stanford University suggested that current flooding is reducing visits to downtown Annapolis by about 2% per year. Another foot of sea level rise would cut the number of visitors by 24%, the study authors estimated.

One of the turning points in the City Dock conversation happened in 2019. That year, the Annapolis Boat Shows set attendance records during their two fall events, generating an estimated $112 million in local economic impact, organizers said. But those numbers could have been higher. A tidal flood during the Oct. 10–14 show swamped many of the booths and sent contractors scurrying to build makeshift walkways.

That civic misfortune helped to galvanize support for the City Dock Action Committee and its report, Fogarty said.

“The flooding has become a situation that can’t be ignored or kicked down the road,” she said.

The threat of tidal flooding in Annapolis is well documented. A 2014 report by the National Oceanic and Atmospheric Administration, Sea Level Rise and Nuisance Flood Frequency Changes Around the United States, used a photo of the City Dock under water as its cover image.

Like much of the southern half of the Chesapeake Bay region, the land beneath the city has been slowly sinking since the end of the Ice Age. The mid-Atlantic may also be a hot spot for sea level rise because of the slowing of the offshore Gulf Stream, scientists say. The University of Maryland Center for Environmental Science has projected a 1.6-foot rise in sea level in the state by 2050 and up to 4.2 feet by 2100, compared with 2000 levels.

The City Dock’s waterfront walkway is just 2.5 feet above the typical water level.

The yet-to-be-finalized plan is to raise the walkway to 5 feet above the water, bringing it to the same height as the bulkhead installed along the water in 2015, said Eivind Dueland of Amber Infrastructure, the city’s lead contractor for the project. Blueprints show a foot-high flood wall being installed on the landward side of the raised walkway. Then, another 2 feet of protection could be added on top of that — without infringing on water views — with a retractable wall or a transparent barrier.

Those plans are subject to change, though, as the design process moves forward, he stressed.

“One of the keys to moving forward is nailing down what is the right level to design to,” Dueland told the City Council in March. “What we want to do is to balance both the cost of the City Dock construction and the need for sea level protection. Creating something that goes to [8 feet above sea level], if it’s not going to be needed for 30 years, isn’t necessarily the best use of public funds.”

Barriers designed to stop floodwaters can also block water going the other way — stormwater drainage — so a pumphouse will be fitted inside the new park to keep the area from becoming inundated by rainwater, Jarrell said. That water will be collected in a tank and pumped into the Bay.

Contrary to what some concerned residents have claimed, the efforts to de-water the City Dock won’t raise the tide enough to cause flooding elsewhere, he said.

“There’s so much water in the Chesapeake that the little that comes on board from here is so miniscule,” Jarrell said.

There’s nothing historic about the City Dock structure itself; it has been built and rebuilt several times over the years. Still, its advocates frequently cite history as one of the main selling points for its rehabilitation.

They’re not alone. In 2018, the National Trust for Historic Preservation, a national nonprofit organization based in Washington, DC, placed the City Dock on its list of the 11 “most endangered historic places.”

The Annapolis harbor has been the centerpiece of the city’s cultural and economic identity since its earliest days in the 1690s. For much of its history, lumber and grain mills, coal companies, watermen and other commercial entities jostled for space at the edge of the growing capital. But as cars supplanted boats as the primary transportation in the 1900s, industry gave way to tourism at the City Dock.

Today, financial transactions around the City Dock are more likely to involve a boat sightseeing tour or a painted landscape of the Chesapeake Bay than a bushel of crabs.

“It’s really the heart of Annapolis here,” Jarrell said. “Visitors always make this a destination when they come into town.”

The dock area hosts several festivals and other large functions each year. In addition to the boat shows, it’s a gathering place to enjoy regatta events, the finish line of the Race Across America bicycle race, the Annapolis Film Festival and a weekly farmers market.

Meanwhile, the National Park Service is partnering with Preservation Maryland on a project adjacent to the City Dock that could have a major impact on the landmark. The collaboration is working to preserve the city-owned Burtis House, a humble-looking home constructed in the 1800s when it was part of a community that made its living from the water.

Plans call for raising the building by 9 feet to get it out of the water’s reach, Redding said. Though the house is some 200 feet from Ego Alley, it’s directly adjacent to a smaller docking basin at the southern corner of the U.S. Naval Academy grounds. The $320,000 project also will remove more recent additions to the structure, which briefly housed the National Sailing Hall of Fame, and restore it to its original footprint.

Some day, the old home could house exhibits about the Bay and serve as a hub for the proposed Chesapeake Bay National Recreation Area, an equivalent to a national park. The concept has gained additional traction recently, even in Congress.

“The City Dock has become much more recreational, and it’s easy to overlook how critical the water and the Bay were to the development of Annapolis,” Redding said. “This one humble little cottage helps connect those dots.”