You are the owner of this article.
Edit Article Add New Article
Welcome, Guest
News
Travel
Columns
Opinion
Multimedia
Bulletin Board
About
Contact Us
e-Edition
Subscribe
Donate
1 of 7 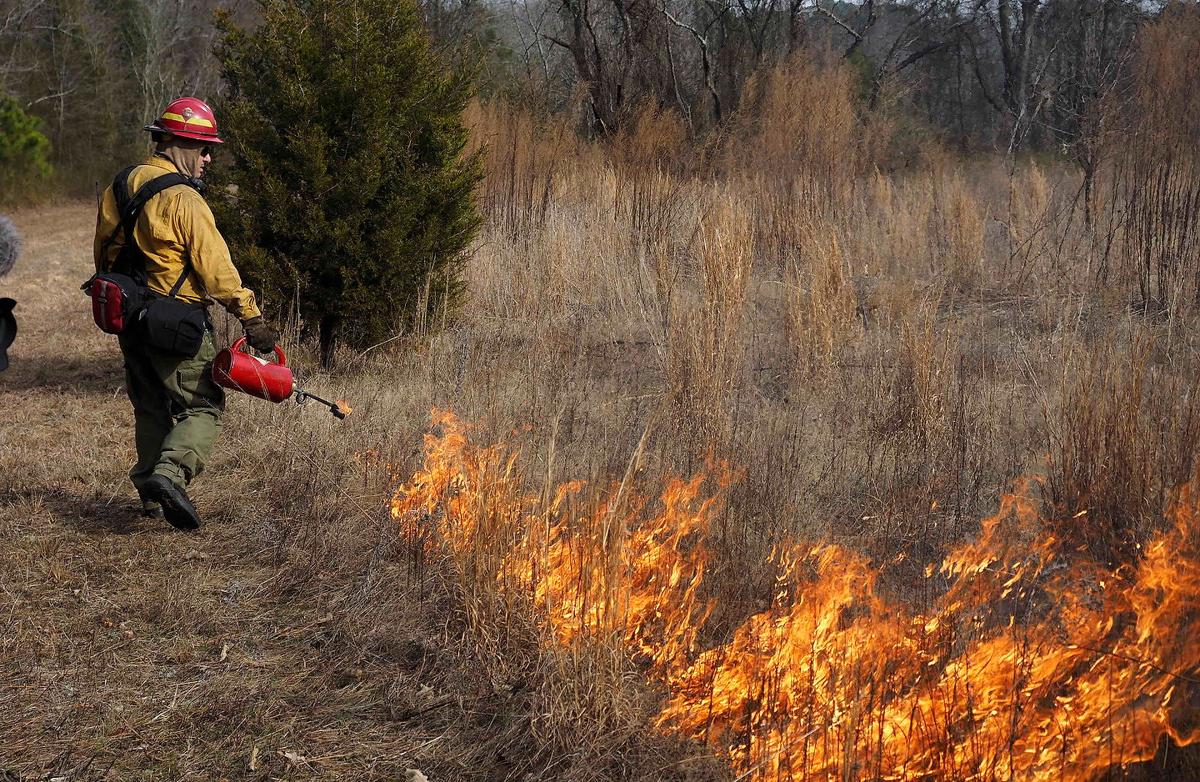 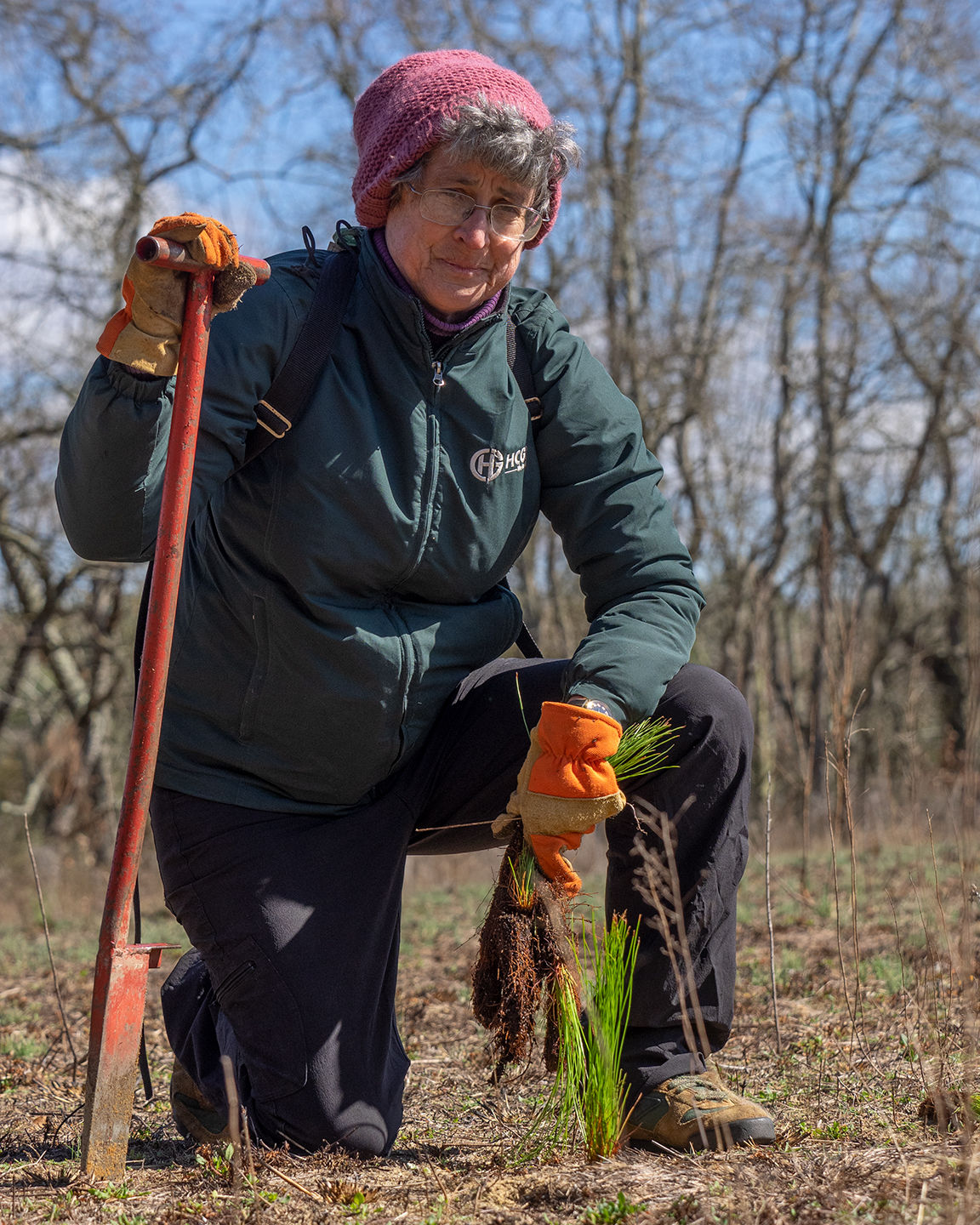 Kate Tully, a Nature Conservancy volunteer from Cockeysville, pauses with her dibble, a tree-planting device, and a handful of seedlings during a planting at the Plum Creek Preserve in Cockeysville, MD. 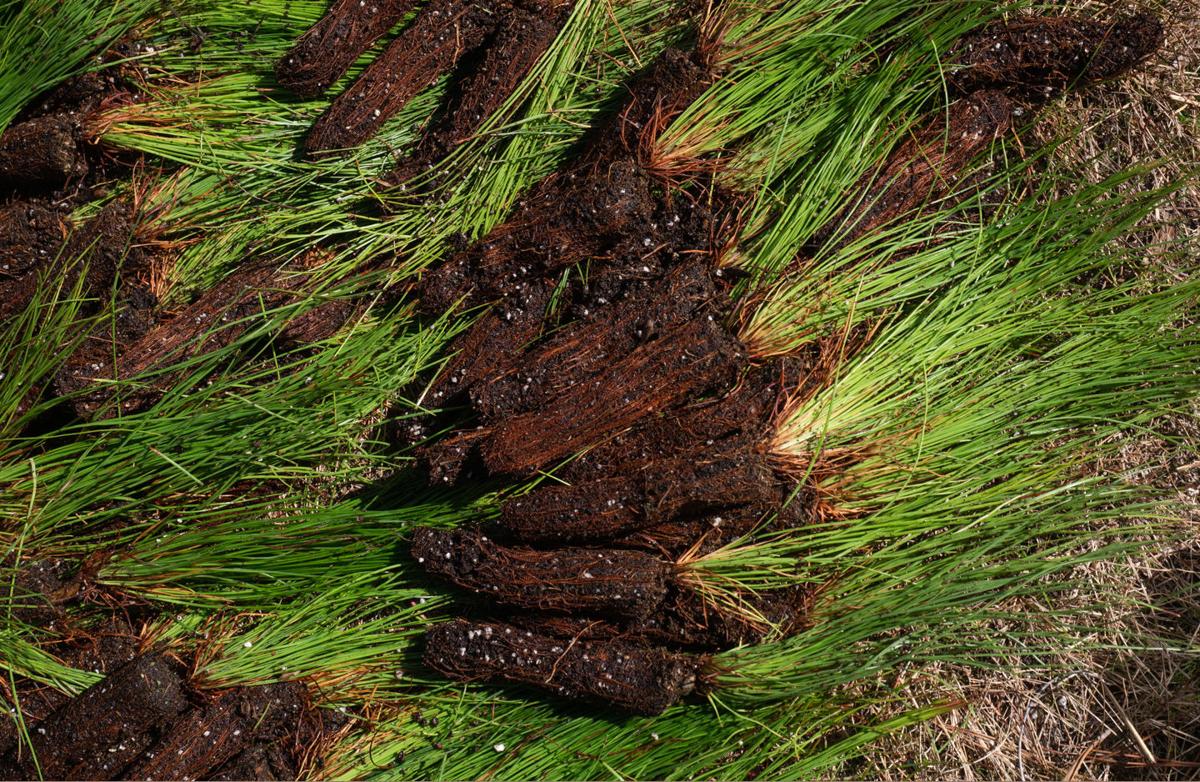 Longleaf pine seedlings are staged and counted prior to planting at the The Nature Conservancy's Plum Creek Preserve in Maryland. 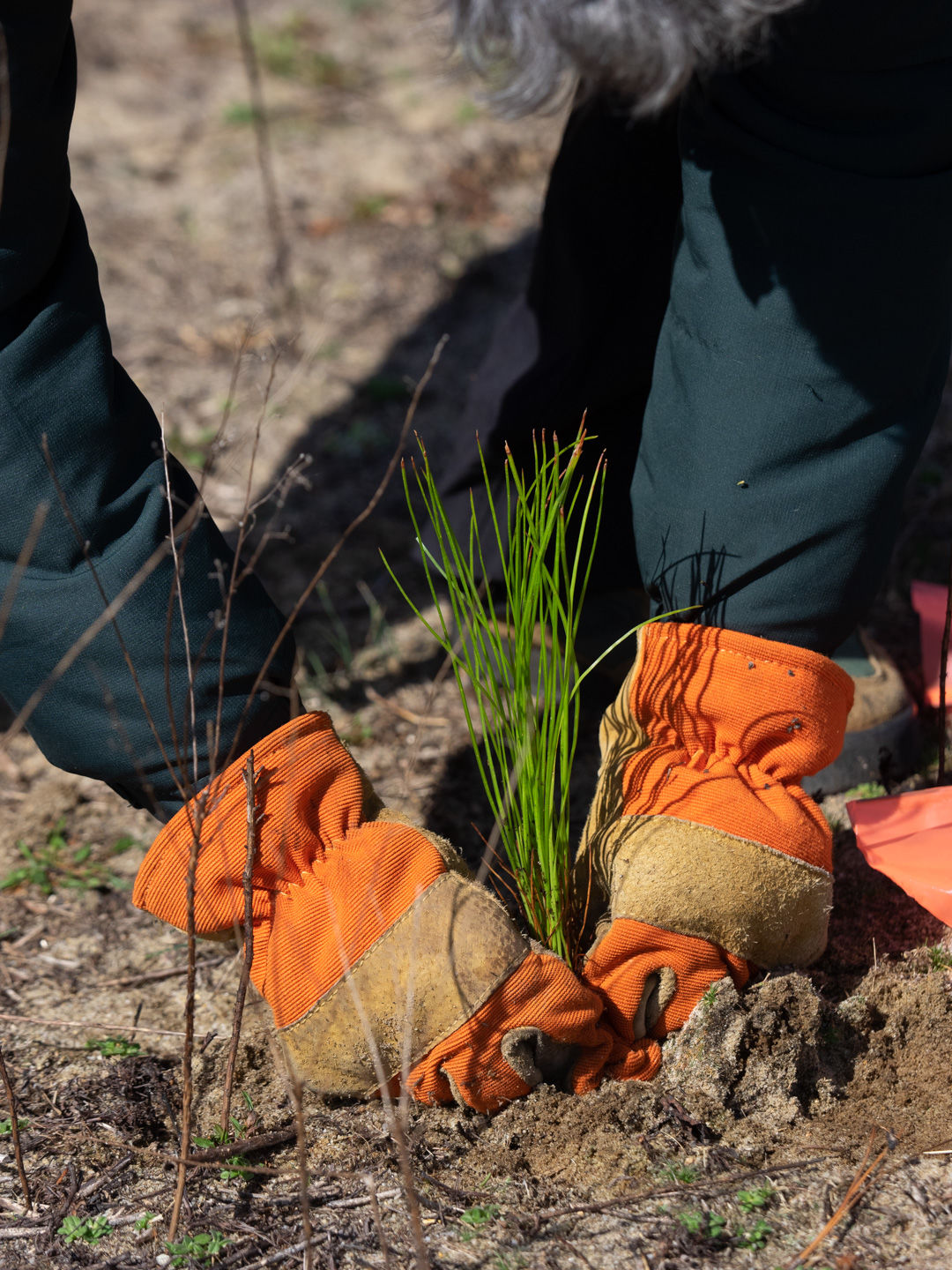 A longleaf pine seedling is secured in the ground at The Nature Conservancy's Plum Creek Preserve in Maryland. 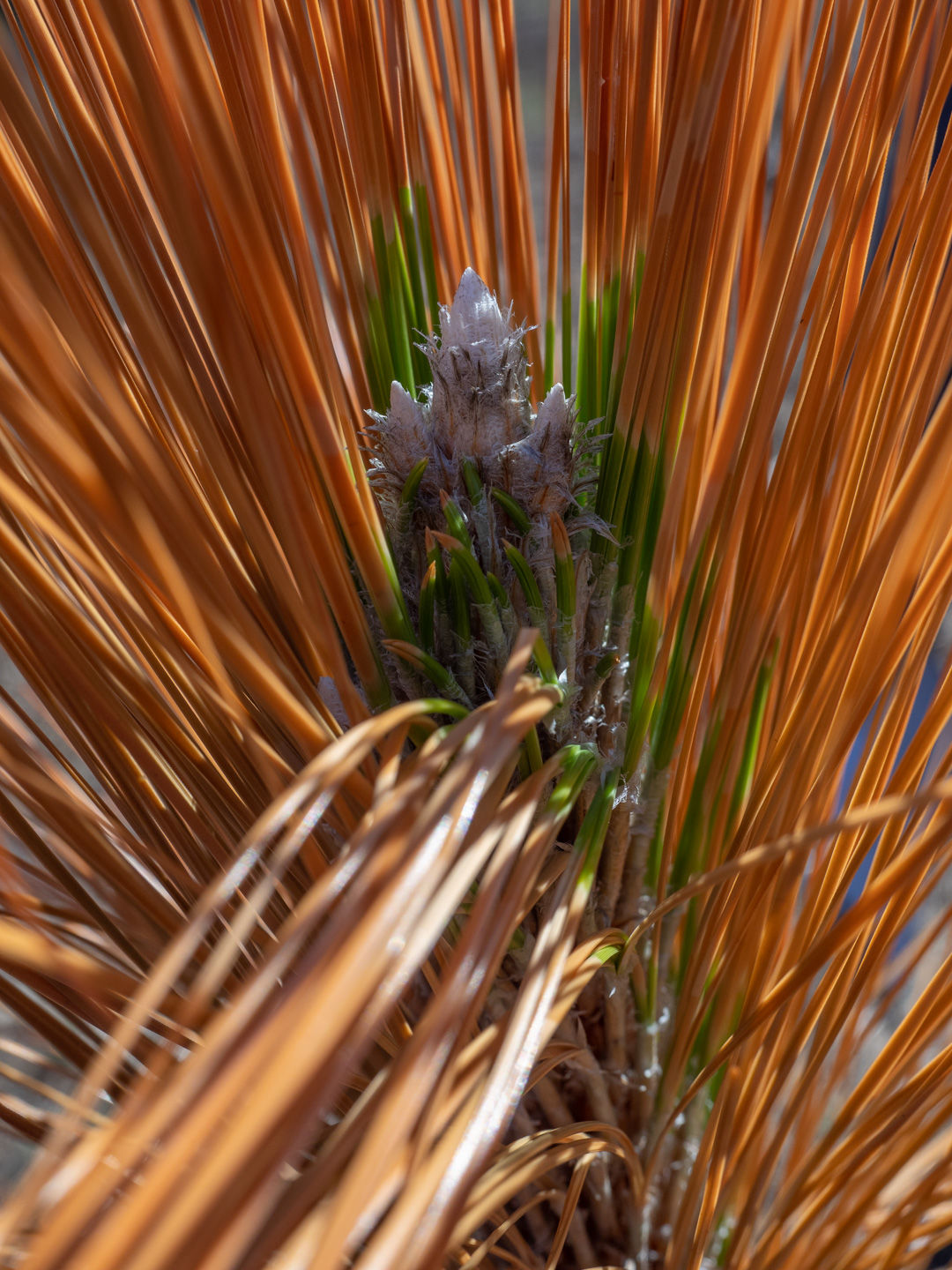 Surrounded by needles made brown by fire, the green "candle" in this longleaf pine suggests life and growth in the coming months. 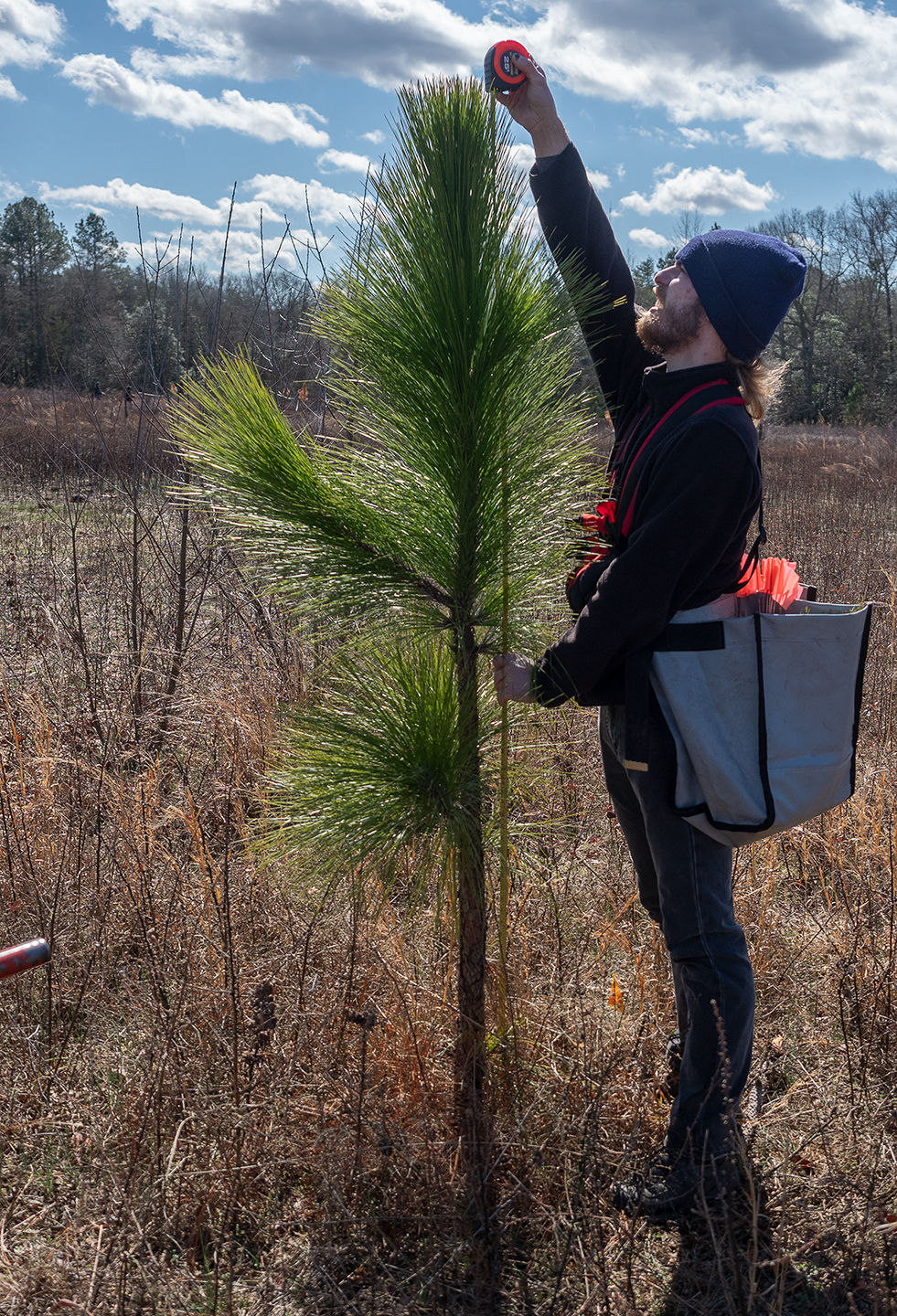 Nick Sparacino of the Chesapeake Conservatiion Corps measures a longleaf pine planted about 5 years ago. It was 80 inches tall. 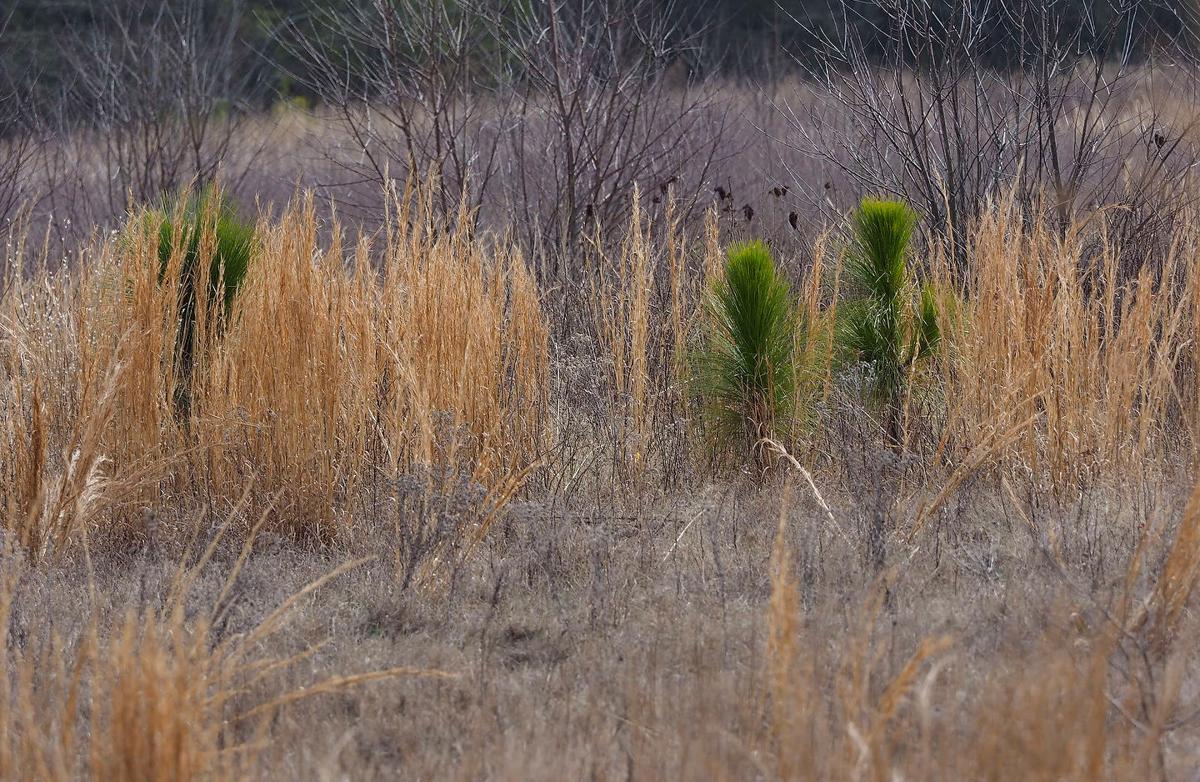 The verdant green of young longleaf pines contrasts with the winter brown of native grasses and trees prior to a prescribed burn that will temporarily clear the grasses and encourage new growth. Longleaf pine trees need fire to promote growth.

On Maryland’s Eastern Shore, an evergreen forest that’s never ventured so far north is slowly gaining a toehold in fields where until recently corn and soybeans grew.

Spurred along by intentionally set but carefully controlled brush fires, hundreds of longleaf pines are now reaching for the sky along Plum Creek, a meandering tributary of the Nanticoke River.

It’s all part of an experiment in “assisted migration” being conducted by The Nature Conservancy. The nonprofit conservation group wants to see if human intervention can help an ecologically important forest ecosystem adapt as climate change alters its range.

Longleaf pine once blanketed the Southeast, covering an estimated 90 million acres from Florida to southeastern Virginia and west to Texas. Unlike dense hardwood forests, longleaf pines grew more widely spaced in parklike grasslands, which were also home to a diverse array of plants and wildlife.

The trees’ straight trunks and tough wood proved valuable, though, in early shipbuilding and the construction of homes and businesses. Centuries of harvesting and development have since shrunk longleaf pine’s extent to just 3.4 million acres — less than 5% of its historic range.

With the forest’s decline, some of the wildlife that once frequented its savanna-like habitat also are threatened or endangered, such as the red-cockaded woodpecker. The cardinal-size bird has a distinctive black cap and white cheeks, with the male sporting a barely visible red speck, or cockade. It nests in cavities dug out of the soft heartwood of mature pine trees, which are in short supply these days.

In an attempt to reverse those trends, The Nature Conservancy has been working with government and other nonprofit groups to restore longleaf pines throughout the South. In Virginia, until now the northern edge of the trees’ range, the conservancy is recreating a longleaf pine forest on the 3,200-acre Piney Grove Preserve it acquired in 1998 in Sussex County.

But changing climate conditions are posing a challenge for sustaining longleaf pine forests and the wildlife that occupy those ecological niches. With temperatures rising at an unprecedented clip, researchers have projected that plants in general could have to migrate up to 3 miles a year to survive. That’s many times the movement rate of many species, particularly trees like longleaf pines.

“It’s no longer a static ecosystem,” said Deborah Landau, a concervancy ecologist. “We can’t just buy it and protect it and hope for the best. The times are changing, the climate is changing. We have to try different things.”

Since 2013, the conservancy has been working with volunteers to establish a longleaf pine forest on a portion of its Plum Creek Preserve, 300 acres of former croplands near Sharptown. They planted about 1,000 long-needled seedlings that year. In 2015, they put in another 500, followed by 600 more on Feb. 27 of this year.

In between plantings, the conservancy and its partners intentionally torch the fields. Longleaf pines can survive such blazes and, in fact, need them to outcompete other vegetation and trigger a growth spurt.

“It opens up the site and dries it out,” Landau explained, adding that “by pushing fire across the landscape, you encourage germination of a lot of native species.”

The fires also help warm-season grasses that the conservancy has planted to replace the crops once cultivated there, species like arrowfeather three-awn, splitbeard bluestem and purple lovegrass.

Before civilization encroached, wide-ranging brushfires sparked by lightning strikes used to be a regular occurrence, sustaining the pines and the grasses that grow on the forest floor. Now, human help is needed.

So, on a chilly, cloudy January morning, conservancy staff and teams of state and federal agency personnel gathered at Plum Creek Preserve to administer another dose of fire to the fledgling forest. The burn was carefully orchestrated, with a firefighting water tanker truck from Blackwater National Wildlife Refuge on hand to douse any errant flames.

Yellow-garbed team members used “drip torches” to start the fire on one 10-acre patch by pouring a thin stream of flaming diesel gas along the edge of the field. Flames spread quickly through the tall dry grass, producing a chorus of crackling as grayish smoke billowed skyward on a gentle breeze.

The fire burned itself out in short order, leaving the ground covered with white ash and blackened stems of vines. But the pine seedlings and saplings remained standing, green and seemingly unaffected. The crew moved on to administer similar treatment to other patches.

Longleaf pine seedlings don’t grow much at first, as they start out by extending a long taproot underground. But after a few years, and with the heat of the fire triggering germination, they grow from clumps of grass-like needles to stubby saplings resembling a green bottle brush. As they continue to grow, they finally begin to produce uneven branches that arc upward.

The conservancy and its partners hope this experiment will give the trees a head start on relocating north to Maryland.

“What we’re hoping to learn is how these more southerly species do as temperatures increase, as we get more extreme weather events,” Landau explained. Longleaf pines can handle extended periods of drought and rainfall, she noted, and their deep taproots help them withstand the strong winds of hurricanes.

They also hope it might ultimately help re-establish red-cockaded woodpeckers in Maryland. The birds also nest in mature loblolly pine forests, which once covered the Coastal Plain area in the state but have been lost to commercial timbering over the years.

It may seem incongruous for a conservation group to introduce a tree not native to Maryland. But Landau said it isn’t really a stretch. After the Ice Age, she explained, longleaf pines slowly extended their range northward from Florida. They had reached the James River in Virginia about 400 years ago, when English settlers arrived and began cutting them down. If that hadn’t happened, she argued, they may very well have found their way to the Delmarva Peninsula, as other southern pines did.

Even so, it takes longleaf pines a century or more grow to their full height. The conservancy isn’t waiting that long to try re-establishing the endangered woodpeckers, though. In another preserve along nearby Nassawango Creek, the group is also managing a stand of native loblolly pines. That forest has been thinned and burned periodically for the last 16 years, she said, to cultivate a similar savanna with big old trees like the ones where the birds once nested.

“Our hope is that in a few years we’ll have suitable habitat at Nassawango for red-cockaded woodpeckers,” Landau said.

But longleaf pines have shown themselves to be so resilient to extreme weather and storms, she added, they may be better adapted to handling the changing climate. “So, we’re hedging our bets,” Landau said.

This experiment in assisted migration hasn’t always gone smoothly. Many of the seedlings planted in fall 2015 succumbed to a hard freeze soon afterward that heaved them out of the ground. “It’s very much of a learning curve,” she said.

On that smoky day in January, though, the progress to date was evident. Looking at a 6-foot sapling, Landau figured it was planted in 2013. It has been burned three times now. After each fire, she said, “they really just kind of shoot up….The effects just speak for themselves. They’re just so satisfying.”