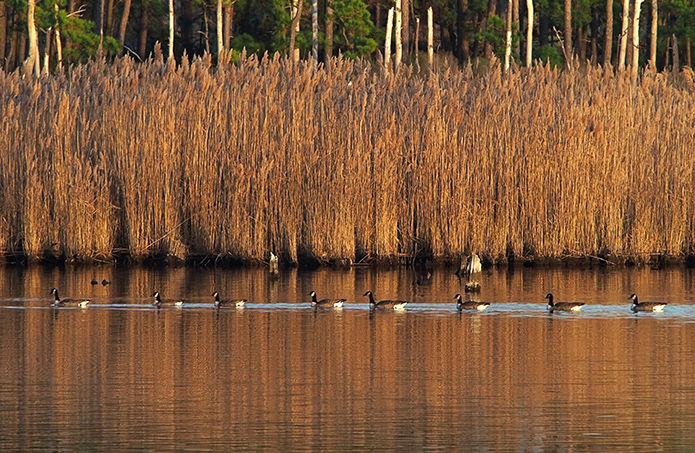 A parade of Canada geese swims past a stand of phragmites at Blackwater National Wildlife Refuge in Maryland. (Dave Harp) 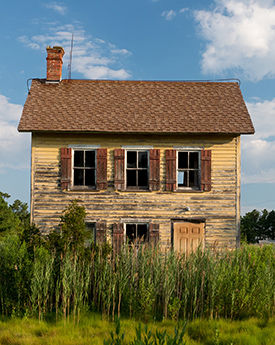 And now, a kind word about one of the Chesapeake Bay’s most hated invasive plants: phragmites.

The tall, feathery-plumed marsh reed is the bane of waterfowl lovers around the Chesapeake Bay region, as it crowds out native wetland plants, depriving ducks, geese and swans of nourishment. Landowners and resource managers alike spend a lot of time and money trying to control its spread, if not eliminate stands of it.

But a new study finds that Phragmites australis and some other invasive plants help to fight climate change by enhancing the storage of “blue carbon” — the carbon that’s accumulated and kept in oceans and coastal environments like salt marshes, mangroves and seagrasses.

“We were aware of the effects of invasions on other facets of these habitats, but this was the first time we really delved into blue carbon storage,” said Ian Davidson, a marine invasions biologist at the  Smithsonian Environmental Research Center in Edgewater, MD. He is the lead author of the new study published Monday in the journal Global Change Biology.

The health and preservation of the Earth’s forests have received attention for combatting climate change because of the trees’ ability to store carbon and lessen its release into the atmosphere. But this study points out that coastal ecosystems — although having far less overall acreage than forests — sequester carbon at a much faster rate. Most of the carbon taken up is stored below ground in the soil, where it can stay for millennia if undisturbed. So the role that invasive species play in these ecosystems is key to their ability to help fight climate change.

Davidson and colleagues, including Smithsonian marine biologist Christina Simkanin and two researchers from Ireland, performed a “meta-analysis” of 104 relevant studies. They found a 40 percent net gain in carbon storage in invaded coastal vegetated habitats compared with similar ecosystems free of nonnative plants. And where invaders performed similar ecological roles in coastal habitats to the plants they were replacing, the carbon storage more than doubled, by 117 percent.

“When you have these essentially ‘ecosystem engineers’ come into the system, not only are they helping build habitat, they seem to be doing it more aggressively and more efficiently,” Davidson said in a release describing the study.

But researchers also found that invasive species’ impacts vary in different coastal habitats — boosting carbon storage in salt marshes, for instance, while reducing it in seagrass beds and having no apparent effect in mangroves. And sometimes plants play different roles in different places. For example, the marsh grass Spartina alterniflora, native to North America, has weakened Chinese mangrove habitats that it has invaded, Davidson noted.

The carbon-storage impact of invasive animals hasn’t been studied as thoroughly. Overall, they appear to have a negative effect, the researchers concluded, though they found at least one case where impacts were mixed. The invasive green crab, for instance, is apparently helping New England salt marshes by controlling a native plant eater, but the crabs are doing significant harm to seagrass meadows in the same region by digging for prey, burrowing for shelter and cutting stems with their claws.

Among all of the habitats studied, the researchers saw the biggest biomass boost from invasive plants in salt marshes. The very characteristics that make a nonnative plant like phragmites so invasive are what enable it to capture and store so much carbon: It spreads and grows rapidly, building carbon-based biomass by forming tall, rigid stems up to 15 feet in height.

“Nobody’s advocating, ‘Let’s introduce phragmites, because it grows really fast and great, and let’s increase carbon storage here,’” Simkanin said in the release. “We’re talking about how to best manage systems that are already impacted by humans, and how to do that in terms of what functions you want to preserve or you find most important.”

State and federal wildlife agencies often support phragmites control efforts, blaming the invasive reed for degrading habitat in the Bay region’s shrinking supply of coastal wetlands. Landowners have been offered technical advice and even financial assistance in some states to kill stands of phragmites by spraying them with herbicides, mowing them or in some cases, flooding.

But in an interview, Davidson said that the study’s findings suggest resource managers and landowners ought to at least consider the climate benefits of phragmites and other invasive plants before deciding on eradication efforts.

“We wouldn’t advocate people going around planting them,” Davidson said, “but you also have to balance the efficacy of going around pulling these up.”