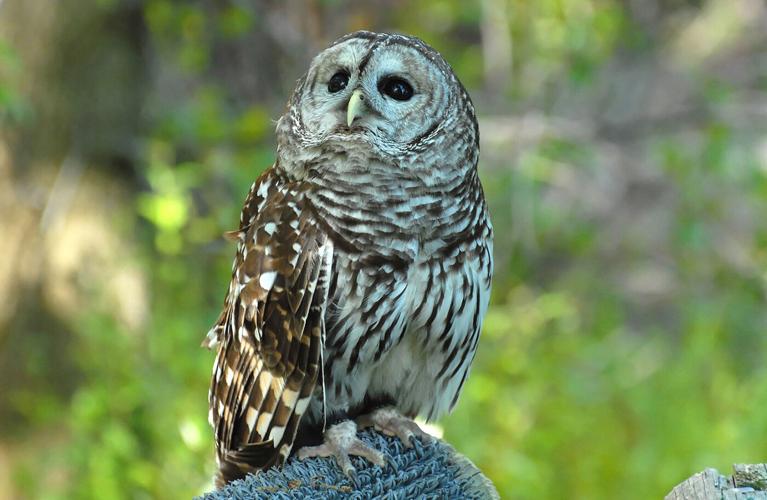 The barred owl is far easier to spot in the daytime than at night, when it is most active. (Joseph Oliver, CC BY-NC 2.0) 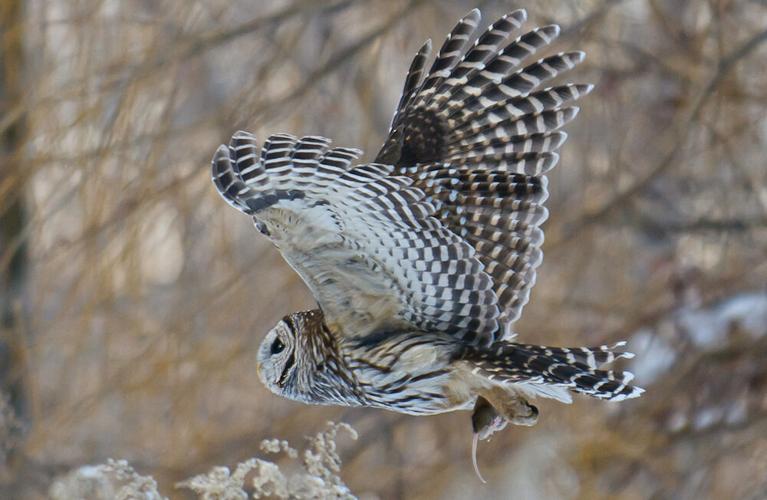 "Who-cooks-for-you, who-cooks-for-you-all..." The resonant notes filled the night sky. We turned slightly. The owl seemed to be high in a tree to our right, quite near the stream that runs through the bottomland forest. Scanning the branches again ended up being futile.

I was determined that we would see this barred owl (Strix varia). I had seen barred owls before, but this one was elusive. On several evenings, we heard its hooted call. Sightings, though, remained at zero. This March night, the moon was nearly full and the sky cloudless. Bundled up against the cold, our binoculars in hand, Pat and I were ready to stay until we were successful.

"Who-cooks-for-you, who-cooks-for-you-all," I hooted in my best barred owl imitation, even trailing off that last note. Just a moment later the call was returned!

Pat was first to spot the owl, bulky and erect on a branch near a tree trunk. It was about 25 feet up. These are big birds. They stand a foot and a half tall, have a wingspan of about 40 inches and weigh as much as 2.3 pounds. Despite their size, they can be maddeningly hard to see. They are most active at night, and their cryptic coloring provides excellent camouflage.

The owl was facing us. In the moonlight we could make out the pale facial disk and big dark eyes set in the round head. The small, yellow beak was indistinct in the gloaming. Browns streaked against a whitish background circle the throat laterally. These are the “bars” that give the owl its name. The breast and belly are pale white with extensive vertical streaks of dark brown. The dark tail, invisible from our vantage point, has five to six white bars, including the terminal band. The back would be brown with buff or white mottling. The sexes look alike, though the female can be noticeably bigger.

Barred owls don’t migrate, so they are on their territory year-round. They inhabit the eastern United States and southern Canada. They are well-established in the Pacific Northwest and have extended their range into northern California. A population is also found in Mexico.

Living up to 24 years and being monogamous, a barred owl lives close to its mate on the pair’s shared territory. During breeding season (starting in mid-March in Maryland), they will sometimes abandon their “who-cooks” vocalization. They substitute a cacophonous duet, calling back and forth in a series of hoots, hisses, whinnies and other sounds. The Cornell Lab of Ornithology’s authoritative Birds of the World website describes the noisy songs as “caterwauling.”

In the one brood the pair raises annually, the female lays one to five eggs, most commonly two or three. Only the female has a brood patch — a featherless area on the belly with blood vessels near the skin's surface to help warm the eggs — so she must stay on the nest for most of the one-month incubation period. Females are often 30–40 percent heavier than males. She uses some of this “reserved energy” to produce eggs. The extra weight also helps sustain the mother through her prolonged period on the nest, even though her mate is feeding her. She can be expected to lose 30% of her body weight during breeding.

When the owlets hatch, they are helpless. Both parents feed them, a process that continues for a month. It is interesting that owlets leave the nest before they can fly. They crawl about on tree limbs and the trunk. Some fall, but they are rarely injured. Gradually, the fallen owlet makes its way back up the tree and keeps exploring.

It takes three to four months before the parental feeding stops and the young birds, now fully fledged, are finally on their own.

Adults feed their offspring the same diet they, themselves, consume. That means primarily mice, voles and the like. Parents bring the food to the nest and tear off strips to feed the youngsters. Small prey such as beetles are eaten whole. Barred owls also eat amphibians, reptiles and fish.

Eating prey whole, as adults do, presents some digestive problems. These owls have an evolutionary answer: two stomachs. In the first stomach, all of the digestible matter is liquefied, then transported to the second, where digestion continues. The remaining bones and fur are reduced to a hard pellet. After each meal is digested, barred owls cough out the potato-shaped pellet. Depending on the size of the meal, pellets can be 3–4 inches long.

Look for them on the forest floor, where they indicate a favorite roosting site is overhead. Scientists (and curious children) will pick the pellets apart, analyzing what was in the last meal. Some amateurs (e.g., me) have also been known to examine owl pellets in detail.

We had found our barred owl. You can do the same. Go on a guided “owl prowl” at your favorite nature preserve or strike out on your own. Be sure to practice your barred owl call before you go. I guarantee that your housemate will let you know if you sound like an owl. You don’t want to be accused of caterwauling.

Hi Mike! Enjoyed your comments on barred owls, and laughed at the sounds described as “caterwauling.” As I write, I’m sitting under the presence of a neighborhood barred owl female who is occasionally looking at me, but mostly scanning the area intently, probably for a meal. We are very fortunate to have a pair of barred owls in the area! Recently, they have been feeding their growing youngster who is improving his flying skills. He/she has a hoarse screech which we’ve heard constantly in recent days . These birds are fascinating! And yes, they do caterwaul! I’ve tried to mimic some of their sounds, with embarrassing results! Love watching, reading and learning about them. Thanks for adding to my appreciation through your words!