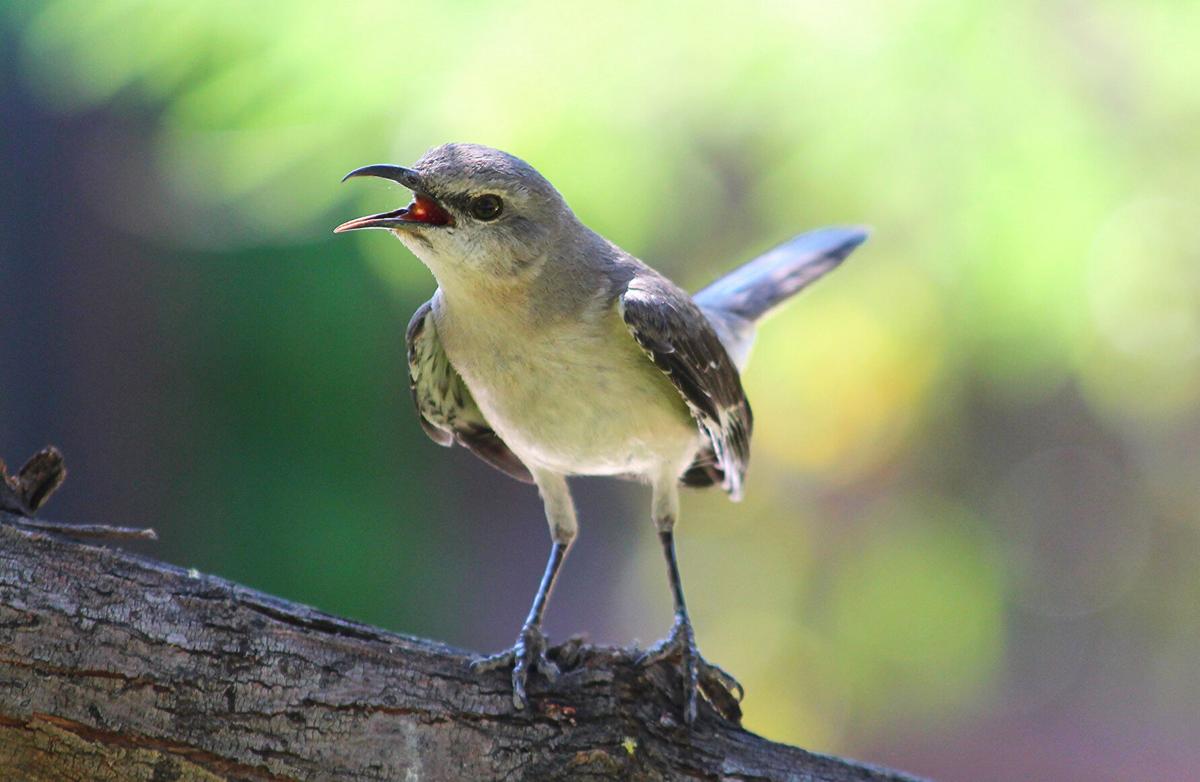 Northern mockingbirds are known for their ability to imitate sounds. They mostly mimic other birds but occasionally replicate human-made sounds like car alarms. (Renee Grayson/CC BY 2.0) 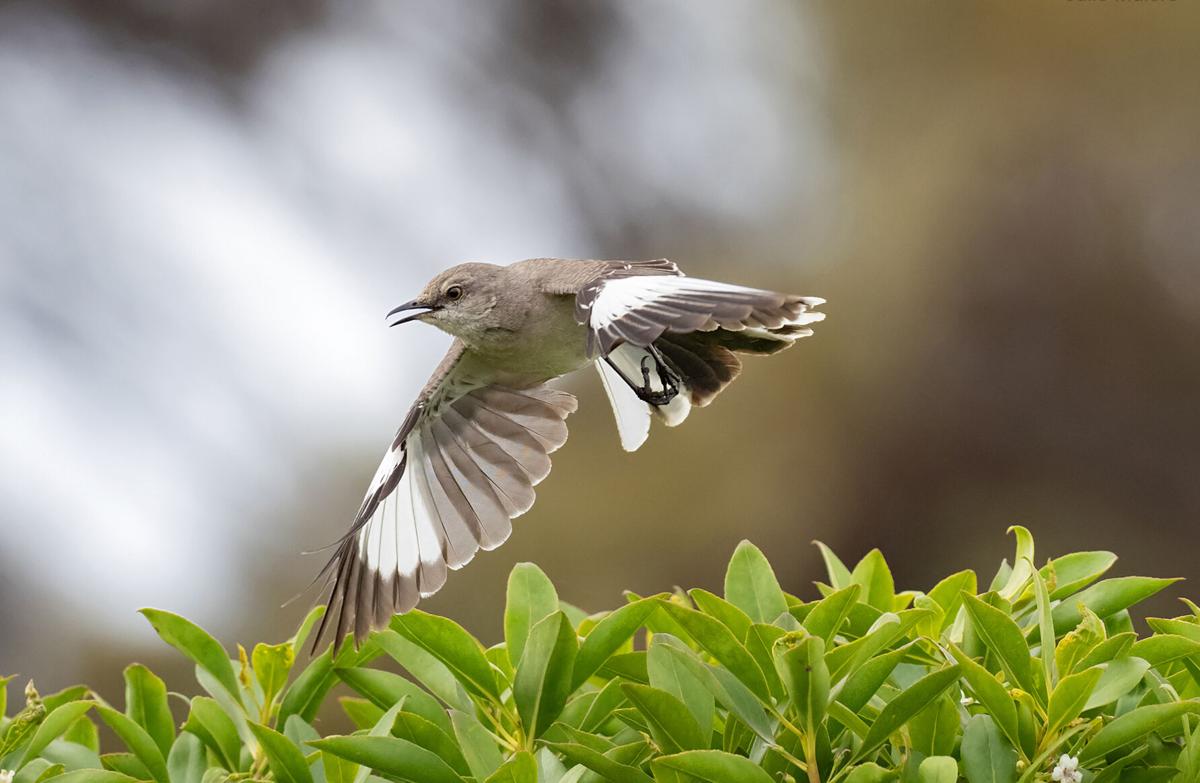 It sounded like a dozen birds singing, one right after the other, in rapid but distinct voices. We were out for a roll-and-stroll (me in my electric scooter and my wife, Pat, on foot), admiring the summer gardens gracing nearly every yard in our neighborhood. The bird songs were coming from atop a tall cedar tree. When I looked up, I saw not a flock, but a single songster.

The northern mockingbird is a master of imitation. It can learn upwards of 200 different sounds, from the songs of other birds to the noises of a residential community. And the male loves to sing. He can go on throughout the day and sometimes into the evening. The songs are clear and typically repeated two to four times each. As soon as he’s done imitating a cardinal, he’s likely to start sounding like a robin.

Most female birds of other species don’t sing, but the female mockingbird is an exception — though her songs are more muted than her mate’s and she doesn’t go on all day like he does. And while males sing almost every month, the female limits her tunes to times when she is establishing territory and nesting. The champion singers in this species are invariably males, like the one atop our neighborhood cedar.

The northern mockingbird comes from the small family of perching birds called Mimidae, which contains two other common Chesapeake species: the gray catbird and the brown thrasher. (There are other species in this family, but they reside primarily in other parts of North America and South America.) As the Latin name suggests, the Mimidae are mimics, expert imitators of other birds. The full Latin name of the northern mockingbird is Mimus polyglottos, which loosely translates to “many-tongued mimic.”

A few years ago, a mockingbird established his territory in an area that encompassed our backyard and those of two of our neighbors. The bird perched atop one neighbor’s roof and sang away all summer. We were treated to imitations of blue jays, song sparrows, wrens and even crows. In the next street over, a resident’s car alarm would go off with painful frequency. Sure enough, the mockingbird incorporated those irritating sounds into his repertoire. Somehow, hearing the “beep-beep, whoop-whoop” coming from a bird struck me as more amusing than annoying.

Mockingbirds are not colorful birds. They are a dull white underneath, with a combination of gray, black and white on top. When their wings are folded, they show two white wing bars. When they spread their wings, the bars expand into large white patches both underneath and atop their wings. They also have white edges to their tails. That’s as flashy as they get.

During breeding season, some mockingbirds may extend their range slightly northward. Their year-round territory includes a large swath of the United States, coast to coast, as well as Mexico and the Caribbean. It includes the entire Chesapeake Bay watershed.

These birds favor areas with lots of open ground as well as scrub. Suburbs, parks and farmland are favorite haunts. As usual, diet determines habitat. In the spring, mockingbirds eat mostly insects. Open landscapes make it easy for them to see and capture their prey, which includes beetles and ants, butterflies and moths, and even bees and wasps. Occasionally they will eat earthworms and small animals such as skinks. In the fall and winter, when insects are scarce, mockingbirds turn to fruits and berries.

The male begins the breeding process by starting the construction of several nests. He uses sticks and twigs to fashion these proto-nests into cups. Eventually, his mate will select one of the offerings and complete the nest by adding a soft lining of grass, rootlets and leaves. She’ll lay up to six eggs and incubate them for 12 or 13 days. When they hatch, it is the male that supplies food to the hatchlings, until they fledge less than two weeks later. In the meantime, his mate will be off finishing another nest and getting ready to lay more eggs. Mockingbirds produce two to three broods each summer.

Although they are prolific breeders, northern mockingbirds have seen their population drop by more than 20% since the 1960s. One reason for the mockingbird’s rapid decline is the dramatic loss of insects (largely due to pesticides). Without that protein-rich source of nutrition, mockingbirds simply don’t have enough food to thrive. Loss of appropriate habitat also plays a major role.

The 20% loss of mockingbirds is significant, yet it does not rise to the level of “special concern” among conservationists. Scores of avian species in North America are in much worse shape. Meanwhile the human assault on the insect world and the landscape continues unabated.

Sitting in my scooter, my admiration of the mockingbird’s vocal range gradually shifted from appreciation to something more sobering. Maybe that car alarm imitation I heard earlier wasn’t so funny after all. Perhaps this many-tongued mimic was sounding an alarm for all the birds, warning “there’s big trouble, and we need help.”

Today there are an estimated 3 billion fewer birds on our continent than there were just 30 years ago, and the northern mockingbird is part of that startling statistic. The bird data are telling us we are in a crisis. It’s time to listen … and to act.