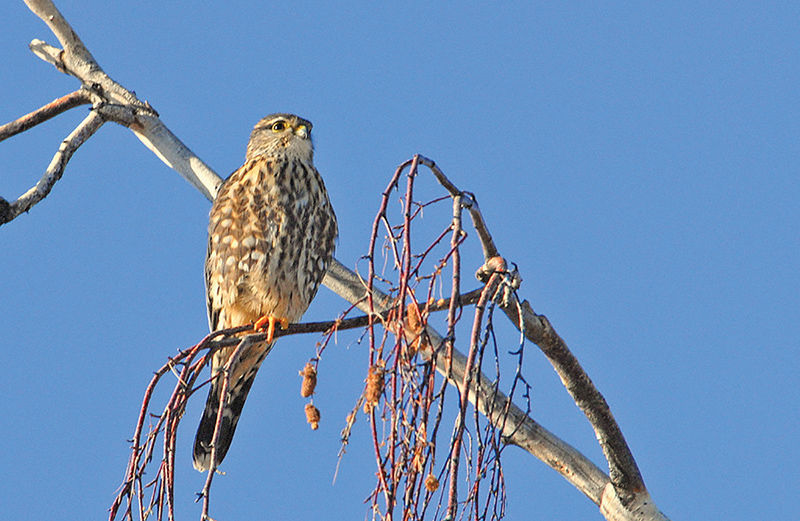 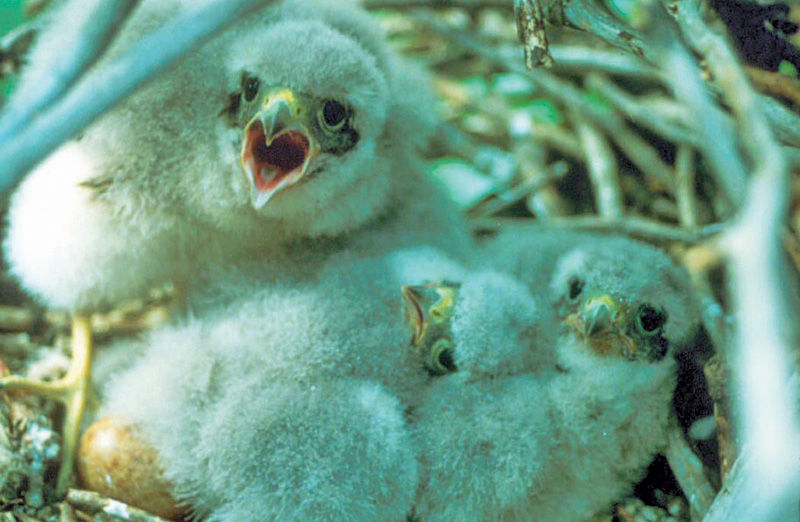 Merlins produce one brood annually. The fledglings stay in the nest for a month before they are ready to go out on their own. (Rob Doyle, U.S. Fish and Wildlife Service)

Merlins produce one brood annually. The fledglings stay in the nest for a month before they are ready to go out on their own. (Rob Doyle, U.S. Fish and Wildlife Service)

Earlier, we had seen a northern harrier, gliding low over the tawny marsh grasses, cruising for prey. This bird was different. It was fast, with strong, rowing wing beats as it raced along just above the mud flats. It was another raptor, for sure, but with tapered wings and a long, compressed tail; this was a falcon, not an accipiter like the harrier.

Just ahead, several shorebirds were probing in the mud for crabs. Within seconds, they recognized their peril and scattered in all directions. The falcon zeroed in on one, and the fast flight turned into furious pursuit. The peep had a head start, but it was no contest.  Every evasive maneuver was mirrored and just moments after it took flight, the small shorebird was snatched in midair, feathers flying in a fatal embrace.

The merlin (Falco columbarius) is a dashing bird in both senses of that word. Merlins are relatively small, about the size of pigeons. A bit bigger than its brightly colored cousin the kestrel, the merlin is noticeably smaller than the peregrine falcon, another close relative. (The bulky gyrfalcon is the only other falcon seen in the Chesapeake, but it is a rare visitor.)

Especially at a distance, the merlin is a dark bird. The male’s cap, back and wings are a dark blue gray. The tail, which has two to three lighter gray bands, is dark, too. The undersides are white with brown streaks. The male has a rufous wash to its sides and leg feathers.

A female merlin has dark brown wings and back and a heavily streaked body. Her tail is a dark brown with three to four buffy bands.

Both sexes have very faint dark malar stripes, the falcon’s “moustache,” which extends down from the base of the bill.

The legs are bright yellow, and so is the cere, that bare spot in front of the eye. The eyes themselves are dark with thin white eyebrows.

About 50 percent of the underwing is covered with white spots, but somehow the wings still give the overall impression of darkness.

There are three subspecies of merlins in North America. The “taiga” is the type seen in the Chesapeake region. There is a much darker morph in the Pacific Northwest and an overall lighter bird in the central part of the continent.

Merlins primarily eat small songbirds and shorebirds. They take their prey on the wing, as we had just witnessed.

Merlins use two methods of attack. They will perch in an exposed area, scanning for likely prey. Or as we had seen, they will cruise low, trying to flush birds into flight. Once the attack is engaged, merlins often try to get below their prey, forcing them higher where the faster-flying merlin has the advantage. Sometimes merlins work in pairs, with the first bird flushing prey and the second right behind to make the kill.

Although small birds make up the majority of the merlin’s diet, the falcon also eats small mammals and reptiles. While on the wing, merlins also take a substantial number of dragonflies.

They use stick nests, but don’t build them. Instead, they reuse old crow and raptor nests. The female lays four to five eggs and incubates them for a month. The fledglings stay in the nest for another month before they are ready to go out on their own.

While the female stays on the nest, the male brings food to her and the chicks. If hunting is good, he may cache dead birds in nearby trees for later use.

In the fall, merlins migrate as far south as Peru. Most of the taiga subspecies end up in the West Indies, but some will spend the winter months along the Atlantic Coast, from New England to the Gulf, primarily feeding on shorebirds.

The world famous Hawk Mountain Sanctuary in Pennsylvania records that the peak autumn passage of merlins takes place during the first two weeks of October. Birds return to their breeding grounds in the spring, coming through the Chesapeake in April.

Overall, merlin populations appear to be growing slightly. Increasingly adapting to urban areas — where they feed on house sparrows — seems to be the reason.

Watching the merlin left me feeling strangely conflicted. I generally abhor violence, yet I found the falcon’s attack thrilling. As I sorted out my emotional response, I realized that it’s gratuitous violence that I find objectionable.

As a birder, I find enjoyment in the intricate construction of an oriole’s nest, the epic migration of a red knot, or the gravity-defying flight of a hummingbird. And, it turns out, I enjoy the aerial skills and deadly accuracy of a merlin’s attack.

What I felt was appreciation, not judgment. For me, expressions of natural avian behavior are fascinating… even when predators kill.