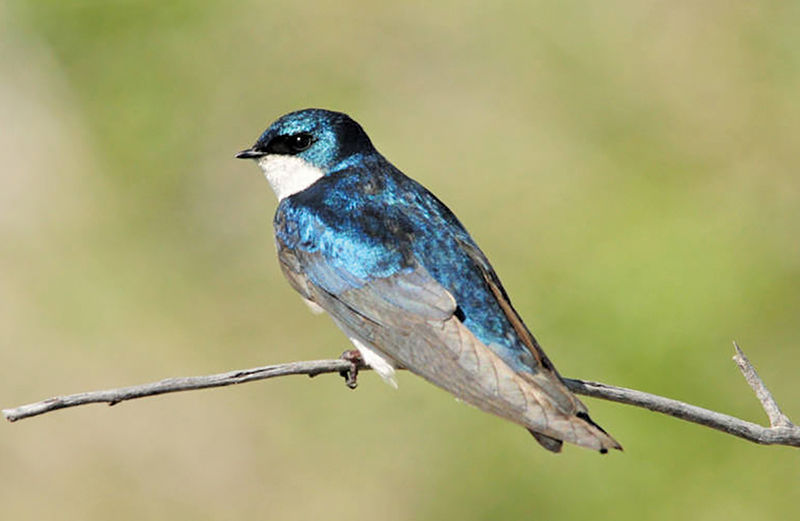 The tree swallow, above, is one of the most studied bird species in North America. We know, for example, that as global temperatures rise, tree swallows nest nine days earlier in the spring than they did 50 years ago. (Tom Koerner / USFWS) 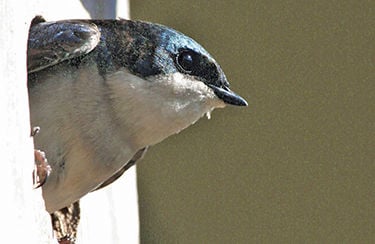 Tree swallows readily take to nest boxes, below, which has helped to stem the decline in their population as the dead trees that provide their nesting cavities are increasingly being removed. (Donna Dewhurst / USFWS)

Brilliant flashes of steel blue and white swirled and danced, careened and darted, twisted and dipped in a masterful display of aerial skills. The binoculars hung unused around my neck — these dazzling acrobats were best viewed with unaided eyes.

They were preying on a swarm of invisible insects just above the marsh grasses. We were at the Eastern Shore of Virginia National Wildlife Refuge on a gorgeous mid-October afternoon. Temperatures were in the 70s, the insects were plentiful and the swallows were feeding hungrily.

As their species name “bicolor” suggests, tree swallows on the wing look like two-toned aerialists, iridescent blue on top and bright white below. At rest, swallows reveal that their long wings are black. Closer inspection shows a black mask about the eyes and a small, flat black bill as well. Although males are generally brighter than females, which tend toward sooty gray, there is considerable overlap. Young birds lack the steel blue coloration entirely.

Tree swallows stand on tiny legs. Their tails are broad with just a hint of a central notch. These are small birds. Their wingspan is just a bit more than 4 inches and they weigh three-quarters of an ounce.

Although they are called tree swallows, a better name might be meadow swallows. As we witnessed, they favor open fields and marshes, especially ones bordering water where insect populations boom.

Trees do play an essential role in one aspect of their lives: nesting. These swallows build their nests in tree cavities, often old woodpecker holes. Since the advent of true suburbia 50 years ago, dead and dying trees (viewed as unsightly by lawn-obsessed homeowners) were cut down, eliminating innumerable nesting holes. Consequently, the population of tree swallows has plummeted by half since the 1960s.

Fortunately, tree swallows readily take to nest boxes. Throughout the United States and Canada, many modern homeowners and park managers have begun to turn the tide by erecting thousands of man-made bird boxes.

Tree swallows are migratory. Almost all of the Chesapeake region’s tree swallows depart the region by late September. As they head south, they engage in great roosting spectacles every night. Groups of birds join other groups at dusk, merging into enormous flocks that can easily grow to the thousands. These swirling masses circle over a favored roosting spot, and with each pass, scores of swallows land and settle in for the night. These bird storms can take minutes to finally dissipate. It is a sight to behold.

The Eastern Shore NWR serves as a massive funnel for southbound avian migrants. It is usually the last place in the watershed to see tree swallows in the fall. A few hardy individuals will even stay all winter.

In the North American West, tree swallows winter from northern California down to Baja and then broadly throughout Mexico. In the East, they winter from the lower Delmarva to Florida, across the Gulf, through Mexico and into Central America. Cuba is the only Caribbean island with a substantial population.

In spring, tree swallows head north to build nests across a massive area that spans central and northern North America — basically, any area with trees / open fields north of Arkansas. Tree swallows begin to arrive in the Chesapeake in early March. Ornithologists speculate that this early arrival is an adaptation to assure the birds a good chance to find nest holes.

Tree swallow are one of the most studied bird species in North America. We know, for example, that as global temperatures rise, tree swallows nest nine days earlier in the spring than they did 50 years ago.

To swallows, insects are food. If it has wings and is smaller than a bird, it is probably part of the swallow’s diet: mayflies and caddisflies, dragonflies and damselflies, butterflies and moths, bees and wasps; the list goes on.

Tree swallows migrate earlier and stay later than many migratory birds because they are also able to digest plant foods when insects are scarce. In the fall and winter, they favor the berries of the Myrcia genus. These plants include bayberry, wax myrtle and about a dozen others. In early spring, they’ll eat catkins and the like.

In the back of my mind I knew that this irreplaceable refuge was at great peril from rising sea level. Localized impacts are already evident. And I knew that many bird species are not as adaptable to climate change as tree swallows appear to be.

But at that moment, the swallows were dazzling, the marshes a glorious palette of fall colors, and the sun shining. There would be time for worry and, more important, action after I got home. This was a time for witnessing great beauty and recharging the heart. And the tree swallows were playing a starring role.