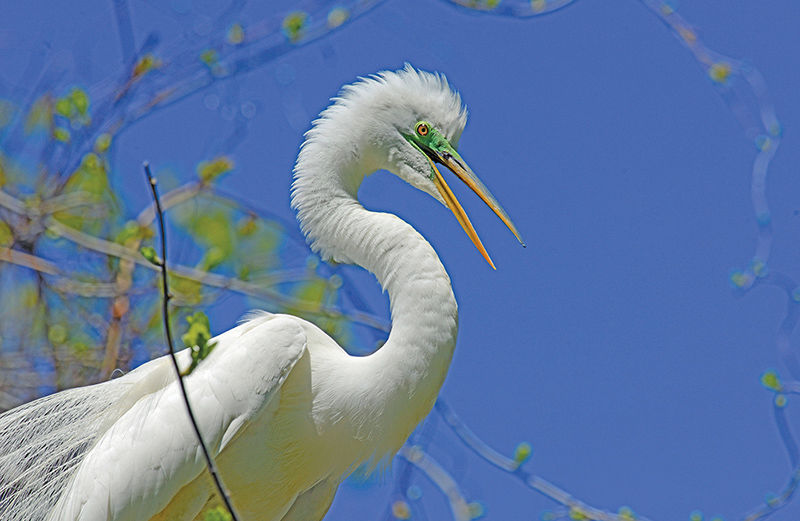 The bright green fleshy area in front of the eyes is only visible during the great egret’s breeding season. This bird was photographed on Wade Island in the Susquehanna River near Harrisburg. (Joe Kosak, Pennsylvania Game Commission / U.S. Fish and Wildlife Service) 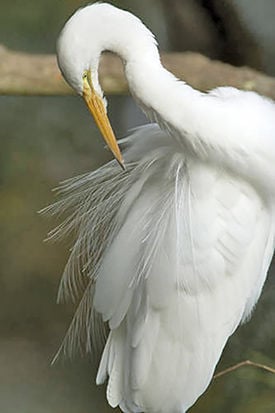 The lace-like aigrettes are only visible during the great egret’s breeding season. These plumes, once prized for women’s hats, nearly led to the bird’s demise until protective laws were put into place. (U.S. Fish and Wildlife Service)

It was April 28, 1988, and I was aboard Amtrak, heading to Washington, DC, to see the Pennsylvania congressman whose re-election campaign I would soon be running. As the train slowly pulled out of the BWI station, I looked out the window at the forested wetlands that border the tracks. A brilliantly white long-legged wading bird stood at the edge of some open water, its imposing yellow bill in profile.

I had just started watching birds in an organized way. Not knowing a heron from an egret, that night I looked up the bird in my new field guide. It was a great egret (Ardea alba), and it became one of the first entries on my life list of birds.

Seeing the great egret when and where I did was no fluke. These birds love wetlands of all kinds, from freshwater to estuarine to marine, from forested to riverside to open marsh. This generalist nature has facilitated the recovery of the species from near extirpation in the United States.

From the 1870s to 1910, herons and egrets were slaughtered in vast numbers. Unlike oysters and waterfowl, which were also being devastated, the wading birds were not being harvested for the dinner table. They were being killed for their feathers.

A century ago, beautiful plumes were an essential part of any fashionable woman’s hat. The craze lasted for decades and decimated the nation’s population of wading birds. The number of great egrets plummeted to less than 5 percent of their 1870 numbers.

The wanton slaughter finally awakened the conscience of many. Organized efforts to save the birds multiplied quickly. The National Audubon Society, formed in 1905, led the legislative effort in 1910 to ban killing birds for the millinery trade. An international treaty protecting the birds soon followed. Legislation putting the pact into action, the Migratory Bird Treaty Act of 1913, also contributed to the heartening recovery of multiple avian species.

The conservation effort — and Audubon — took the great egret as its emblem. The reason is simple: It’s a beautiful bird.

Great egrets are easy to identify because of their all-white feathers, yellow bill and black legs. Both sexes look alike, and juveniles look like their parents.

The bird’s appearance changes for a short time during breeding season. The bare yellow skin in front of the eyes turns a brilliant lime green, the upper bill becomes dark while the lower bill becomes orange-yellow. The birds also add lovely aigrettes, long lace-like white plumes that gracefully fall off the shoulders.

Except for Antarctica, great egrets can be found on every continent in the world. In the eastern United States, they have established permanent homes from coastal Virginia south through Florida and across the southeastern states.

In spring, some of these egrets migrate north to nest. The largest breeding colony in the Chesapeake watershed is in Maryland, but rookeries are established annually in Virginia, Delaware and Pennsylvania as well. After the young have fledged, great egrets scatter across the watershed and much of the nation in late summer and early fall.

These birds primarily eat fish, which can constitute more than 90 percent of their diets. Most prey on minnows and the like, but great egrets can eat surprisingly large fish, too. I remember seeing one use its daggerlike bill to spear a catfish. After carefully shaking loose the mortally wounded fish, the egret tossed the catfish into the air and caught it head-first in its mouth. The outline of the oversized meal was clearly visible in the egret’s long white throat as it swallowed the fish whole.

The diet of the great egret is not limited to finfish. It may also include eels, crustaceans, frogs, salamanders, snakes and small mammals.

Aboard the train all those years ago, I knew little about the important role laws played in the recovery of the great egret. In the intervening 30 years, I changed careers from political campaigns to environmental policy. My understanding of the law grew alongside my knowledge of birds. Laws governing the establishment of wildlife refuges, protection for migratory songbirds, recovery of waterfowl, banning of certain pesticides, and many more left me impressed with the breadth and effectiveness of legislative action.

Every time we stand in the woods, beside a river or overlooking wetlands with binoculars in hand and birds in view, we owe a great debt to the laws that make that viewing possible.

But the job is far from finished. Discarded plastic can kill birds as surely as DDT did. Habitat loss of forests and wetlands devastates avian communities just as clear-cutting and marsh filling did years ago. And climate change threatens vastly more birds than the millinery trade did a century ago.

We need to emulate those passionate advocates from 100 years ago who saved the great egret. Birders need to organize and advocate for new laws that will address these new threats to the objects of our passion. Indeed, the perils are graver now than ever before. Are we up to the challenge?