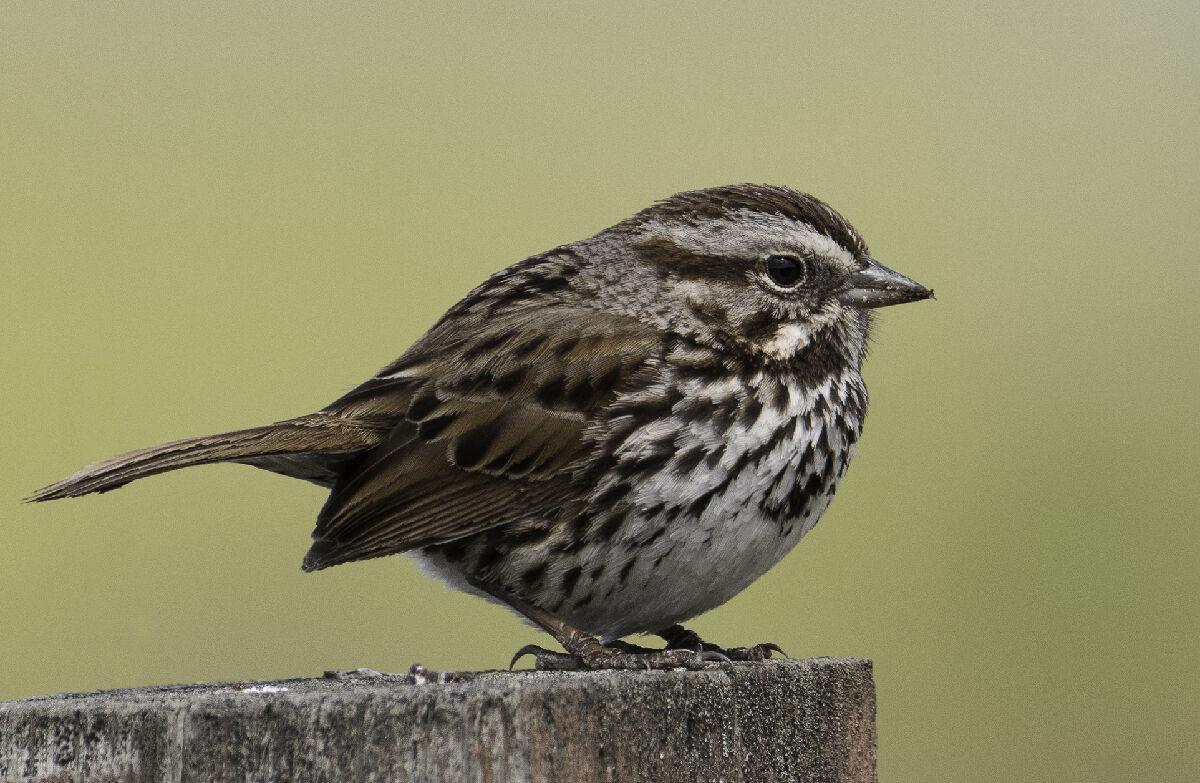 Unlike other birds, which are most vocal in mating season, the male song sparrow sings its distinctive tune well into the summer. (Becky Matsubara/CC-BY 2.0) 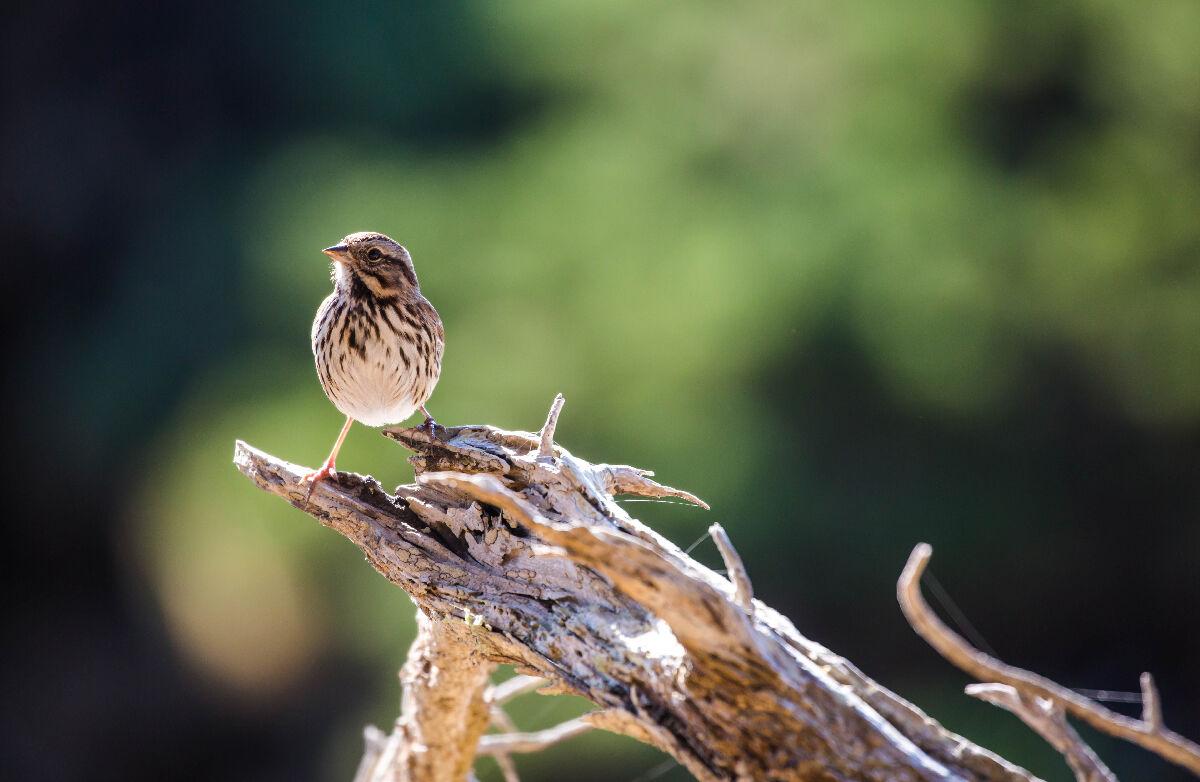 Some parts of the United States, including the Chesapeake Bay watershed, have year-round populations of song sparrows (Melissa McMasters/CC-BY 2.0)

It lasts just three or four seconds, starting with a pair of loud, clear, almost metallic notes. A momentary pause, then a buzzy trill. The first two notes (sometimes three) are abrupt, but sharp and complete. The trill, in contrast, spills out — as if the bird can’t get the notes out fast enough, the song cascading up and down, perhaps ending with a flourish of two or three additional notes.

The song sparrow is a wonderful summer companion. In most avian species, males sing only in the spring breeding season. The song sparrow shows off his vocal gifts for months. When I hear this bird, I know it’s summertime.

Song sparrows (Melospiza melodia) are heavily streaked brown birds. Their body coloring is intricate: a blend primarily of browns, blacks and shades of white. They have a gray, patterned face with a narrow white crown stripe bordered in chocolate. A broad white eyebrow stretches from bill to nape. There is a patch of white on the throat. The bold streaks on the breast coalesce into a central spot of dark brown or black.

Sparrow species can be notoriously difficult to identify. Face patterns have a dizzying array of combinations. Is the face dirty white or pale gray? Is there a bit of gold, or would you call that yellow umber? Is that wood-brown or russet? Overall, is the bird dark or light? Is the head rounded or flat? To make matters infinitely more difficult, the song sparrow itself comes in 24 subspecies, each with its own peculiar palette. There are few perching birds that come in such variety.

The song I can hear every day is not the same as the ones sung across the country. There are numerous regional variations. Thankfully, the basic pattern is uniform: a few introductory notes followed by a buzz or trill. It is the same music, just transposed for a slightly different instrument.

Song sparrows are spread across the United States. In fact, they exist in an unbroken range from the Maine shoreline to the far ends of Alaska’s Aleutian Islands (due south of Siberia). During the summer, some song sparrows migrate up into Canada to breed. In a phenomenon known as “leap-frog” migration, the populations that breed in the northernmost part of their range fly farthest south to overwinter. In between, a large section of the country that includes the entire Chesapeake Bay watershed has year-round populations of song sparrows. In keeping with its extreme variety of coloration and songs, this changeable bird exhibits every variation of seasonal travel: migratory, stationary and mixed.

Like many birds, song sparrows feast on insects and other invertebrates during the spring and early summer. This diet helps the sparrows ingest enough protein to breed successfully. As the weather cools and insects become less available, these sparrows effortlessly switch to seeds, fruits and berries.

The song sparrow I have been hearing this summer likes to perch on a light post when he’s singing. Typically, though, you can more readily find these birds skulking in low bushes or on the ground, where they scratch through leaf litter, searching for their next meals. Song sparrows will come readily to platform bird feeders. They eat a wide variety of offerings, from black oil sunflower seeds to millet to mealworms.

Song sparrows build their cup nests either on the ground under a shrub, or in a low bush. They have at least two clutches of one to six eggs each season. Incubation lasts 12–15 days, followed by a nestling period of 9–12 days. Although they are considered monogamous, song sparrow pairs seem to take that notion lightly. In 1998, a careful study demonstrated that more than 15% of 200 young birds were not sired by the mother’s social mate.

Ornithologists have been studying song sparrows for decades. They are good subjects. The birds are nearly ubiquitous. Local populations to study are never far away. The birds are tolerant of humans, and their nests are readily accessible.

In 1937, American ornithologist Margaret Morse Nice published a landmark study of the species, Studies in the Life History of the Song Sparrow, followed by a second volume in 1943. Together, the works established a new standard, and not just for avian studies. Morse Nice identified individual birds in the field and then proceeded to study them in their natural habitat over time. Her careful integration of ecological and behavioral studies had never been done in such a rigorous fashion. Years later, the noted Nobel Laureate Konrad Lorenz remarked, “her paper on the song sparrow was, to the best of my knowledge, the first long-term field investigation of the individual life of any free-living wild animal.”

Recognition came grudgingly in the male dominated field of avian science, but Morse Nice’s reputation has grown over the years. The two-volume study has become the gold standard for biological ethnology (the science of studying individuals within their cultures). Her works are still widely cited, and the song sparrow has been a model species for ornithologists for generations.

I lack the patience and intellectual rigor to devote that kind of attention to my summer songster. I’ll leave to others the intensive field work, the detailed notetaking, and the careful construction of deductions. Instead, I simply enjoy the sounds of the song sparrow.

The next time you’re outside, take a moment and listen. There’s a song in the air: Summer’s calling.