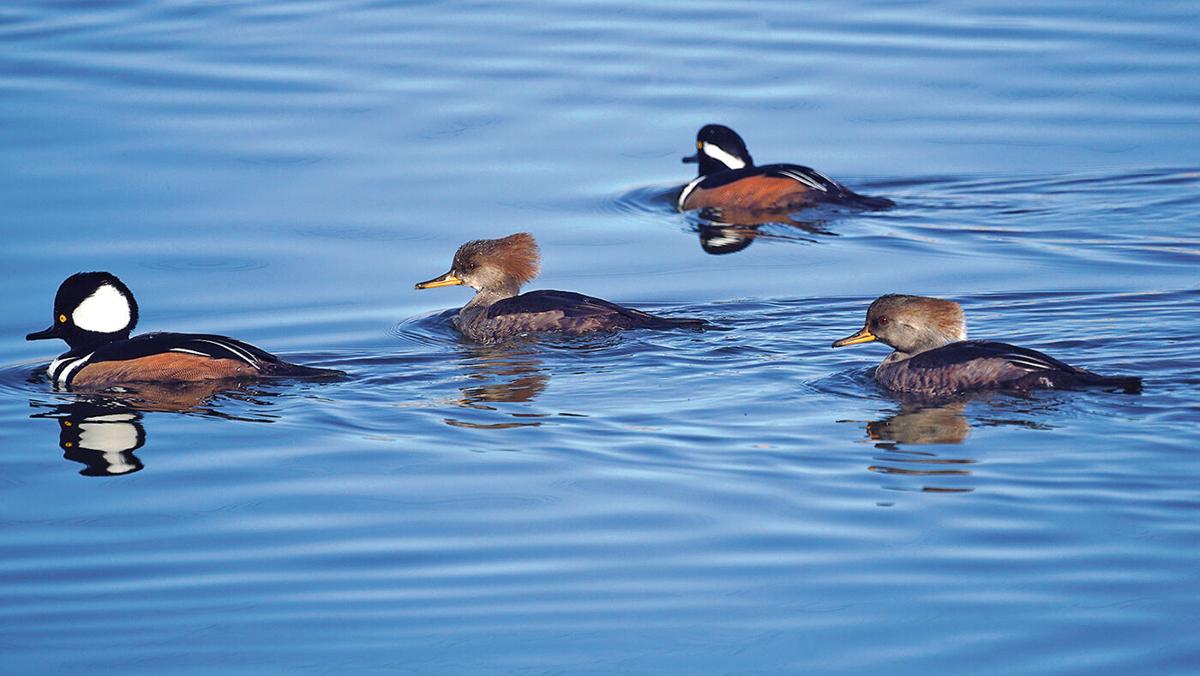 A quartet of hooded mergansers cruises on a lake, the males easy to spot with their oversized crests and white cheek patches. (Mike’s Birds / CC-BY-SA 2.0) 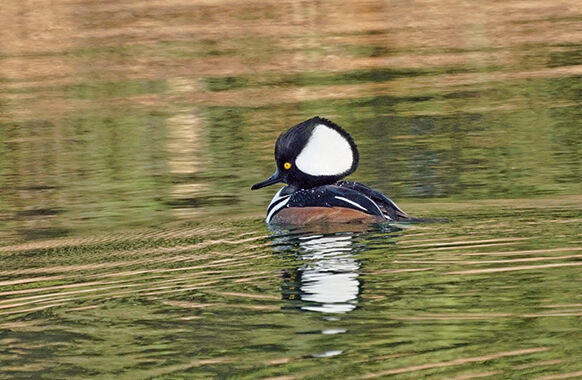 At first, I didn’t see the ducks because of all of the Canada geese on the lake. Our small resident population of Canadas was dwarfed by 150 or so of their migrating cousins, all crowded onto the surface of the 6-acre water body. The sporadic honking and constant movement made it difficult for me to focus my attention. Then, suddenly, there they were: half a dozen diminutive hooded mergansers, clustered directly in front of me.

There were four of the dramatic males and a pair of females. All of the males had erect crests, with a very large, very white, fan-shaped patch on each side. How had I missed these eye-catching birds?

Hooded mergansers (Lophodytes cucullatus) are among our smallest ducks, but they are also among the most visually striking. The male’s flamboyant fan crest gives the head an oversized effect. When the crest is relaxed, it flattens out and points backwards, making the white patch more of a thick horizontal stripe. There’s no mistaking a male in breeding plumage. Rounding out its face are a thin, ebony bill and yellow eyes. Chestnut sides sit below a black back and above a white belly.

The female also has a crest, but it’s a rusty brown, poorly defined, and extends more backward than straight up. Like the male, the female has the thin bill typical of mergansers. She’s got a white belly, but the rest of her is a cryptic blend of grays, blacks and browns. Her eyes are brown, tending toward orange.

Hooded mergansers are diving ducks. Their legs are set far back, making them clumsy on the ground. But these ducks are graceful under water, where they use their feet for what they’re built for — propulsion.

Their thin, serrated bills are perfect for capturing slippery fish, which are an important food source. Unlike other mergansers, hoodeds have a varied diet that also includes crayfish, aquatic insects, snakes and amphibians.

During winter, hooded mergansers congregate on brackish bays and tidal rivers, where the saline waters resist freezing and the ducks can continue to dive for food. In the summer, they usually breed on smaller lakes and rivers. Hooded mergansers nest in cavities; most use natural openings in trees, but the species will readily use artificial nesting boxes.

The female selects the site, but doesn’t improve it. She uses the old nest or even a pile of wood chips in the bottom of a nesting box. Hens lay five to 13 eggs and incubate them 26–41 days. Despite eggs being laid over a two-week period, the chicks emerge together, a phenomenon called synchronous hatching.

Hooded mergansers practice brood parasitism — that is, females often lay eggs in others’ nests. The unwitting adoptive mother doesn’t do the math and can be counted on to incubate the extra egg. The practice appears to be widespread, but ornithologists can’t be very precise about that because they have the same challenge as the surrogate moms: All of the eggs look alike, so it’s hard to tell if they all belong to the nest occupant.

Despite the confusing mix of eggs, hooded mergansers have a good record of successful nesting. Their population is thought to be growing modestly.

Ducklings leave the nest after a single day. They bravely jump from the nest hole to the ground. Amazingly, the tiny fluff balls may bounce once or twice when they hit the forest floor, but they emerge without injury. As soon as the group is assembled, the mother marches her brood to a nearby pond. The chicks start swimming and feeding on their own immediately, but it will be another 70 days before they fledge.

In the Chesapeake Bay watershed, hooded mergansers typically lay their eggs in March or early April. The chicks hatch in May, but it’s July before the birds are ready to fly. There is just one brood annually.

The male’s crest is easily the species’ most visually arresting trait, but I think its most fascinating feature is one that can’t be seen. That honor goes to the bird’s remarkable eyes. Hoodeds have an extra set of translucent eyelids for use under water. Human underwater vision is blurry because water is refractive — it bends the light — and our corneas can’t adjust to the refraction and therefore can’t keep the focus sharp on the retina. (Refraction in water is also the reason why a spoon in a glass tumbler appears to be broken at the surface.) The merganser’s eyelid, though, corrects water’s distortion and even magnifies the bird’s vision. The result is especially well-adapted eyesight for an underwater hunter.

Vision is a funny thing. I had been alerted to the presence of the ducks by a friend. But when I went looking for the hooded mergansers on the lake, initially there was too much visual stimuli for me to “see” the birds. Once I focused on them, though, they were plain as day.

Often, I feel like I could use an extra set of eyelids. I need a set that filters out the extraneous stimuli that sometimes overwhelms me in today’s complicated world. I’d give up fancy headwear for that attribute any day.

We had two hooded mergansers here last summer, a bit later, on our pond. A female and a juvenile, I believe...or two females. They stayed late, into October, before they migrated. They were wonderful to watch.

Unfortunately, otters may have fished us out this spring, so I hope we have something for the hooded mergansers to dive for if they come back.