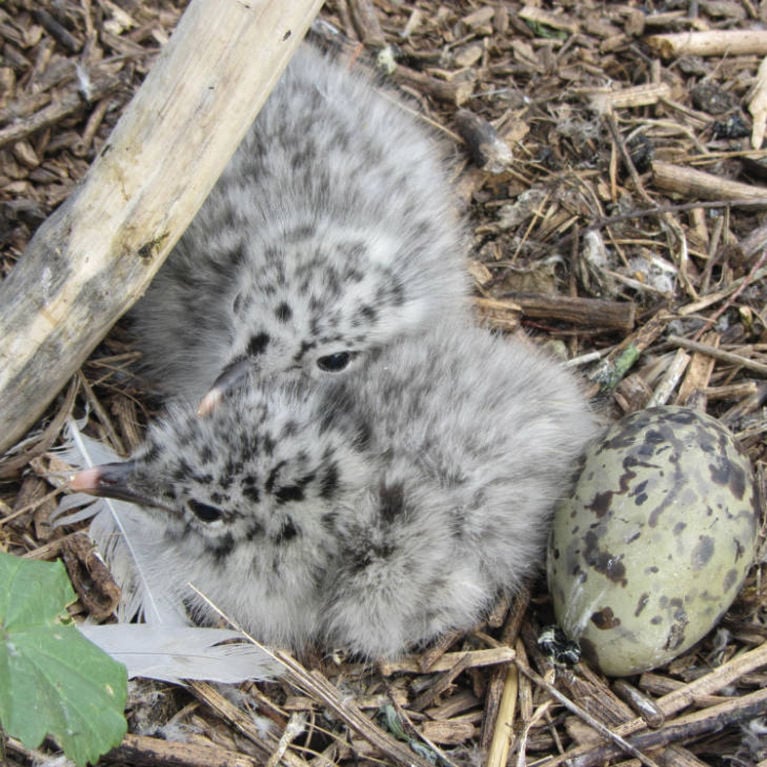 A ring-billed gull is nutritionally depleted by the time she lays a third egg. The final egg in this nest will be off to a slower and less robust start than its older siblings. Fewer than half of these final eggs are likely to survive. 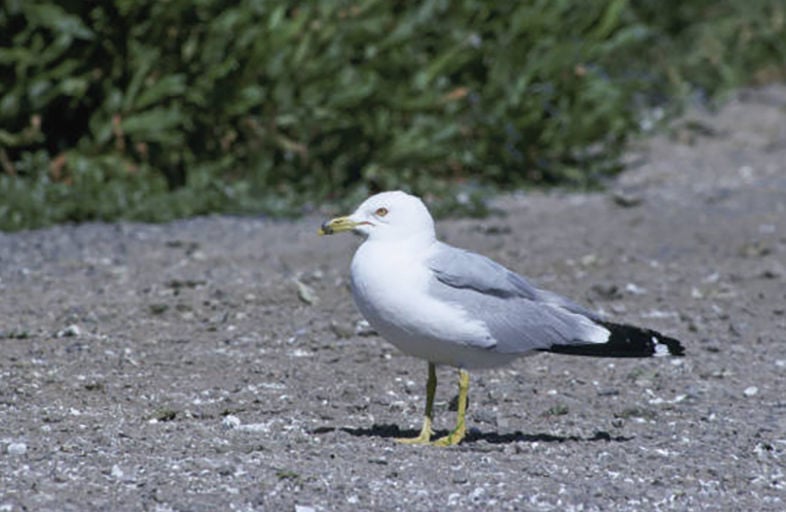 Ring-billed gulls of all ages have a black band around their yellow bill.

Identifying gulls has flummoxed many a birder, including me. Gulls take several years to reach their adult feathers. Getting there involves a complicated progression through such mysterious plumages as juvenile, first alternate, second basic, and third alternate before ending in their definite phases. For years, rather than hazarding a guess on a specific species, I have entered the generic “gull species” on my checklist.

We were confronted with this problem a few Januarys ago while birding at Shorter’s Wharf on the edge of the Blackwater National Wildlife Refuge outside Cambridge, MD. A group of gulls was loafing along the shore during a clear, cold morning. I could identify a greater black-backed gull, which is a giant among gulls and has jet-black wings. And there were a couple of adult laughing gulls

There were another half dozen gulls that all appeared to be the same size, but some were brown and white while others had soft silver wings and backs. Despite their superficial differences, they were all ring-bills (Larus delawarensis).

Adults were easiest to identify. A black band around the yellow bill gives the bird its name and serves as a quick diagnostic sign. Their heads and necks were white with a bit of brown. They had pearl gray wings that reached back over their white tails. The wing tips were black, spotted with white dots near the end. This was their “definitive basic” plumage. Same-age males and females look alike regardless of the time of year.

Next to the two adults were four younger birds, but with brown replacing most of the silver seen in adults. In almost all avian species, by the time young birds fledge, they are the same size and shape as their parents. This was a major clue in recognizing that these birds were ring-bills, just like the adults. The fact that all age groups display that eponymous black ring around the end of the bill confirmed the identification.

One of the brownish gulls wasn’t even a year old. It had extensive brown on its head, neck and chest. The wings were mostly black and brown. Only the back displayed the gray feathers of the adults. The other three birds were second-winter birds. Their wings and backs were silver, but their heads, necks and breasts showed much more brown than those of the two adults.

By the end of February, the adults would go through another molt, jettisoning the brown feathers for bright white everywhere but the wings and back.

Shortly thereafter, ring-bills would return to the same nesting area where they were born. These nesting colonies can range from a few dozen nests to tens of thousands of breeding pairs. By June, the colonies would be filled with every age group and the whole range of ring-bill plumages.

Most ring-bills breed far from oceans along inland freshwater beaches. The nest is a simple scrape in the ground with a bit of vegetation. Females lay two to four eggs (usually three), taking a day or two between each one. Each egg weighs about 12% of the mother’s mass. By the time she lays the third egg, she is nutritionally depleted. That final egg is off to a slower and less robust start than its siblings. Fewer than half of these final eggs are likely to survive.

Eggs are a lusterless khaki green with extensive black blotches. When the chicks hatch, their natal down looks nothing like their parents. These little puffs of black-and-white are embarking on a complex molting regime that will take them three years to complete.

Ring-bills are partial mid– to long-distance migrants, and some birds don’t migrate at all. Those that do may fly hundreds or even thousands of miles from their breeding territory in Canada and around the Great Lakes. In the winter, the birds fan out across both U.S. coasts, the South and into Mexico. A few continue down into Central America.

The history of ring-bills is a tale of great losses followed by recovery. Like so many other birds with brilliant white feathers, ring-bills were hunted for the millinery trade between 1880 and 1920. During this era, eggs were stolen by the hundreds from nesting colonies for use in fine dining establishments. In addition, farmers wrongly believed that the birds were pests and shot them in vast numbers. Populations plummeted.

All of that changed with the advent of the Migratory Bird Treaty and companion legislation. The species mounted a steady comeback between 1920 and 1990. The population exploded 250% over the next 20 years. Today, ring-bills are common and widespread.

Ring-bills are omnivores, going wherever they can find a steady supply of food. Their dietary mainstay is tiny fish, but they also gobble up earthworms, insects, grain, small rodents like voles, and human garbage. They frequent landfills and farm fields, shopping malls and parking lots, beaches and marinas — and boat ramps, like the one at Shorter’s Wharf where the gulls had taken a break from fishing.

It has only been in recent years that I have started studying plumage variety in gulls. My trip checklists now usually note the specific gull species rather than my old generic fallback listing.

I’ve found that it’s not as confusing as I thought. Sure, there are a lot of color variations, but ring-bills are all basically the same. Kind of like humans, now that I think of it.