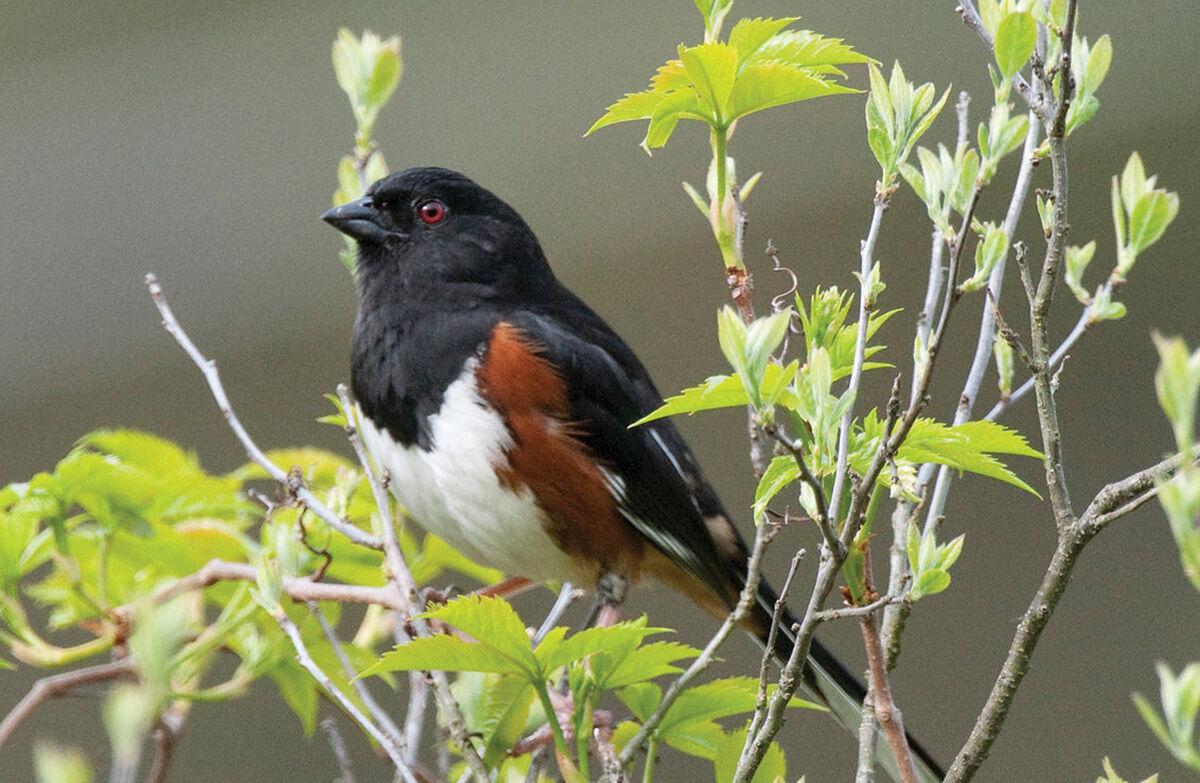 This is a male eastern towhee. The female is almost identical; where the male is jet black, she is dead leaf brown, which helps to camouflage her when she is sitting on the nest. (Bill Thompson, U.S. Fish and Wildlife Service Northeast Region / CC BY 2.0) 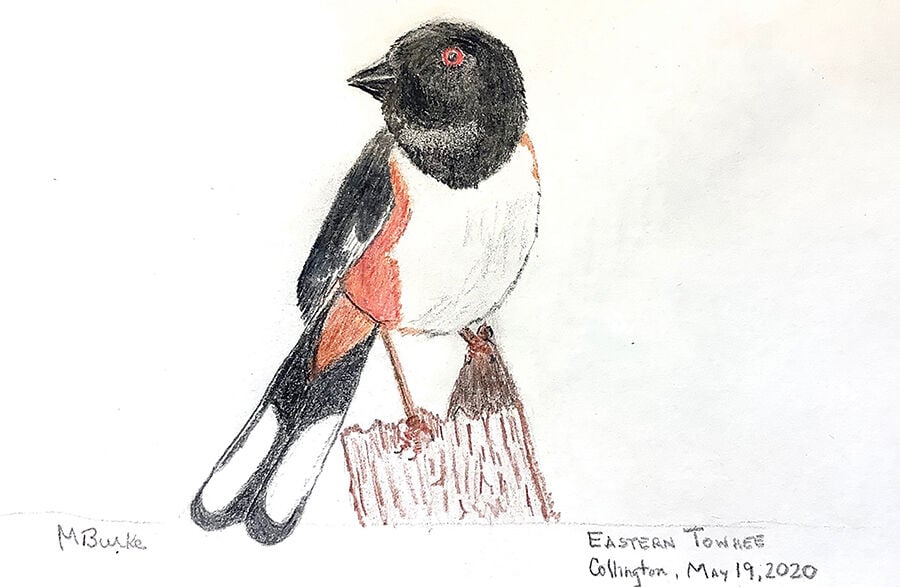 Binoculars in hand, I was on alert as my scooter slowly rolled around the corner. I wasn’t disappointed. The object of my search was easily spotted. The eastern towhee is our largest sparrow, and he was noisily rustling through the leaf litter. I pulled up the binoculars for a better look.

Boldly patterned, the bird I was viewing was a male. He had a black hood, an arresting red eye, black wings and tail. Rusty sides and undertail coverts contrasted with his white breast and belly. He also had a white patch on his folded wing. As he energetically sifted through the detritus, bright white outer panels on his long tail flashed.

The eastern towhee (Pipilo erythrophthalmus) is a captivating bird to watch. It uses both feet at once to flip away loose matter in search of various beetles, bugs, and spiders, which constitute major parts of its diet.

When the bird finishes searching in one spot, it will flit a short distance and continue its noisy pursuit, endlessly flipping away leaves with those feet and swiping more to the side with its bill. It looks like a lot of work for each morsel uncovered.

As my wife, Pat, and I watched, we noticed a second bird farther back in the scrub. Through the thicket we could make out another towhee, a female. Nearly identical to the first, this bird was dead leaf brown where the male was jet black. Both birds had substantial, black conical bills.

A bit smaller and stockier than a robin, towhees are most often found on the forest floor. Besides insects, they are looking for other food items such as seeds, snails and berries.

These birds even build their nests on the ground, relying on their camouflage coloring for protection.

Females do all of the nest construction, forming a cup nest well hidden in the undergrowth. Only females incubate the average clutch of three to five eggs for 12–13 days. Both parents feed the chicks until they leave the nest on day 12. The pair may produce a second brood in the summer.

The bird gets its name from its call, a sharply rising, emphatic tow-HEE. Its song is usually described as a metallic “drink-your-tea,” followed by a trill.

Although their coloration is well-adapted to their habitat, their rummaging behavior and big voice usually make them easy for birders to find.

More than 2 miles of paved paths encircle the 125-acre, heavily wooded senior living community where we now live. The paths go by a 6-acre pond and through a meadow. Mostly, though, they hug the tree line of the forested nature preserve, Regent Park, that borders the campus. A few sections of the paths even dip into woodlands.

I am quite limited in my ability to walk these days, so the scooter and paths are a godsend, affording me the opportunity to be outside and engage in my favorite pastime: birding.

The coronavirus has hit Prince George’s County, MD, where we live, especially hard. We have been confined to campus since early March. We are lucky beyond words to live at this oasis during such a time of peril.

As we become familiar with our peaceful patch, we have gotten to know the favorite haunts of various species. I slid around that sharp bend in the path primed to see the towhees. We had seen them there often.

The Chesapeake watershed represents a transition zone for eastern towhees. From the Delmarva and southern Virginia across to Iowa and south to the Gulf, these towhees are year-round residents. The towhees that winter here in Maryland are short-distance migrants. In April they head north to breed, a few traveling as far as southern Canada. A number of birds that winter in the South fill in behind them, giving us towhees every month, although the mix of individuals changes with the seasons.

At times the world seems out of kilter. A virus rages, unemployment soars and racial injustice spreads like a plague.

I take these short scooter rides around campus as a respite from the news. They are a balm to a battered soul. But I know that they are no more than that…a moment of joy in an isolated area. I looked up from the towhee and saw Pat’s masked face. It was a stark reminder that all is not well.

The work ahead of us is monumental and sometimes feels futile. Can COVID-19 be stopped, and the economy restarted? Can we really turn the tide in the extinctions inexorably rolling across the globe? Is it even possible to stave off the worst of climate change? Will we ever confront systemic racism?

I took another look at the towhees in front of us. We need these moments in nature to refresh our psyches and strengthen our resolve.

After a deep sigh, I decided to follow the example of the towhee: dig in with both feet and thrash ahead. Eventually, the goal will come into view and another small victory be achieved. Then it’s on to the next struggle. Like those birds, the key is to stay at it, endlessly.