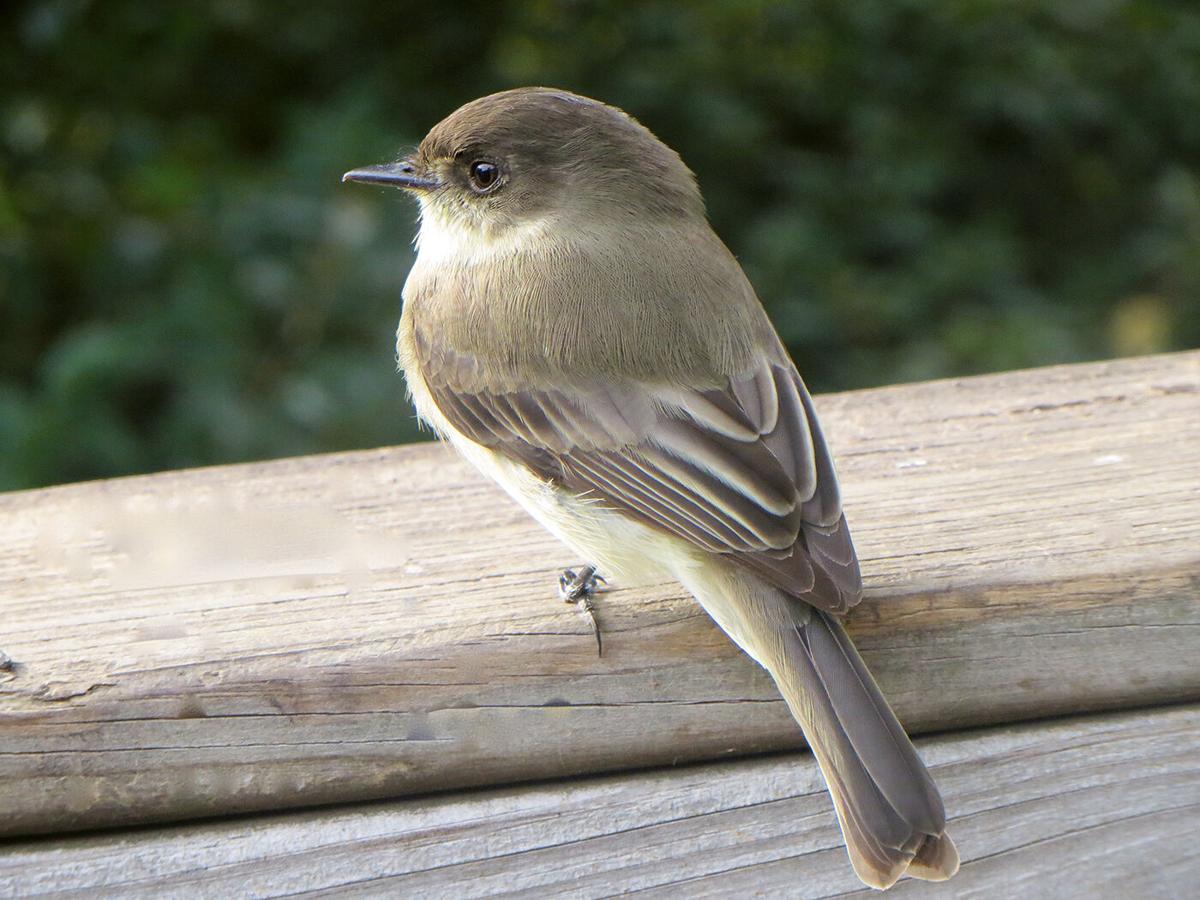 The Eastern phoebe is one of three species in the Sayornis genus of the flycatcher family and the only one commonly seen in the eastern United States, especially in summer months. (C. L. Ricketson, CC BY 2.0) 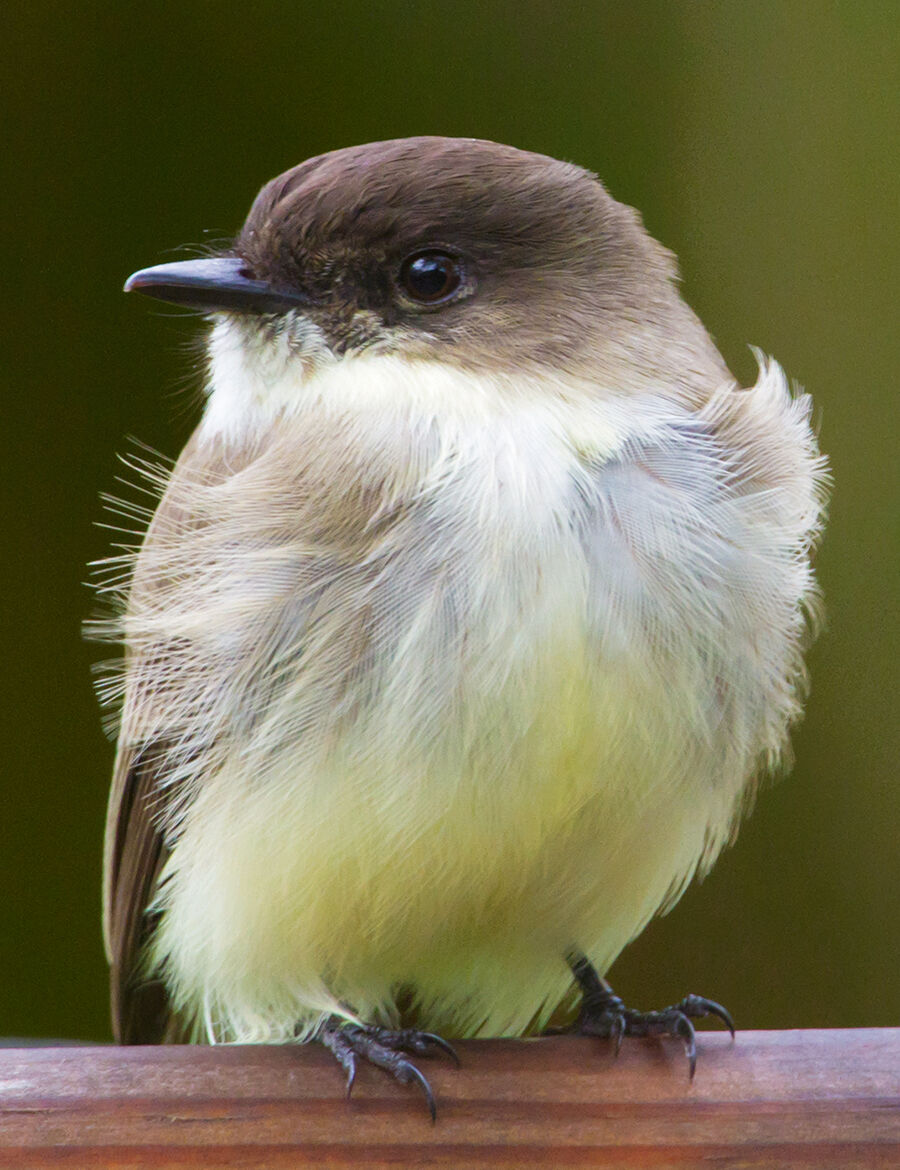 After breeding, the phoeble molts, and its off-white undersides give way to a yellow wash. (Dan Pancamo, CC BY-SA 2.0)

The summer heat continued to be oppressive. Thankfully, one person offered her house for our little meeting. I was briefing a group of fellow residents on a new sustainability plan for our retirement community. The lively conversation ranged from energy-saving LEDs to expanded composting and even electric vehicles and charging stations.

We were about to wrap up, when a bird just outside the big sunroom window caught my eye. It perched on a shepherd’s hook, tail pumping rhythmically, before sallying forth to snatch an unseen insect in midair. I interrupted myself to point out the bird.

I could tell that some were unimpressed. It had no flashy colors or distinguishing marks like eye rings or wing bars. In truth, it wasn’t much to look at, but I was still fascinated. Birders are like that: A bird doesn’t have to be visually arresting to be interesting.

For the nonbirders in the room, I identified it as an eastern phoebe (Sayornis phoebe). A few minutes later, after my impromptu monologue on the behavior and diet of the phoebe, I returned my attention to the sustainability plan. We finished 10 minutes later.

Eastern phoebes are common here in central Maryland every summer. They belong to the large avian family of flycatchers. There are two other phoebes found in North America, the black and the Say’s — both are found exclusively out west, making identification of the rather plain-looking eastern bird a bit easier for those of us in the Chesapeake Bay watershed. The three phoebes are joined by another 33 native flycatcher species on our continent. And that number pales in comparison with the 400 or so flycatcher species in the Americas combined. They constitute one of the largest and most diverse family of birds in the world.

The phoebe we saw had a dark, almost black, head. The nape, back, wings and tail were a softer gray. The bird had a white throat and incomplete neck ring. The undersides were a dingy white. After breeding, the bird molts, and those off-white undersides give way to a yellow wash. Fresh wing feathers have a thin white leading edge, giving the phoebe’s folded wings a faintly striped appearance. The sexes look alike. Juveniles have faint orange wing bars that gradually fade away.

The hot sun had brought out summer’s insects in force. The phoebe was busy, catching them as they flew by and then zipping back to the hook. Equipped with a slightly flattened black bill and terrific agility, phoebes are expert insect catchers. They eat moths and butterflies, cicadas, wasps and other winged insects. Sometimes they eat spiders, often by hovering near a branch and gleaning the arachnids there. In cold weather, when insects are scarce, phoebes turn to seeds or small fruits.

On the perch, eastern phoebes will typically flick their tails up and down and constantly turn their heads to scan for their next meal. That pumping tail is perhaps the best field identifier for birders.

These birds are short- to intermediate-migrants. During the winter they live in Mexico and along our Gulf Coast. Some reside year-round in an area that stretches from the Delmarva Peninsula over to West Virginia and down into Georgia. Come breeding season, phoebes that winter in the deep South or Mexico head north, often as early as March. They fan out, covering the Mississippi River watershed, central and northwest Canada, and points east to the Atlantic, including the entire Chesapeake watershed.

Phoebes live in woodlands, parks and many suburban neighborhoods. You can identify them by that flicking tail and their voice, a quick, raspy, whistled “shree-dip, shree-brr.” Usually it is translated eponymously as “Phoe-bee.” It is similar to the softly lisped “fee-bee” of the black-capped chickadee.

Eastern phoebes build their mud and grass cup nests in natural crevices and under overhangs. They are one of the few species that seem to have benefited from man-made changes in the landscape. The tens of thousands of bridges that stretch across the continent provide the ledges and weather protection that phoebes seek for their nests. Gradually, they seem to be expanding their range west and north. Phoebes often return to the same breeding territory and sometimes even reuse the same nest. Females alone construct the nests.

Because they are primarily eastern-America, short-distance migrants, phoebes are likely to withstand the climate changes under way and accelerating. Phoebes are not coastal birds, so they will be protected from rising sea levels. As the planet warms, the birds are expected to move farther north, where many already breed. And unlike many western birds that are imperiled from record-setting droughts and attendant wildfires, eastern phoebes are not likely to suffer from the warmer but wetter weather predicted for the mid-Atlantic, New England and southeastern Canada.

As I made my way home, mentally I ran through the elements of our sustainability plan. It called for renewable electricity, planting native trees and bushes, adopting a more carbon-friendly diet, eliminating plastic bags and bottles, and rethinking transportation options. It was ambitious. But I couldn’t help worrying: Would it be enough, and would it happen fast enough?

The eastern phoebe is well-prepared for the future. Will we be?