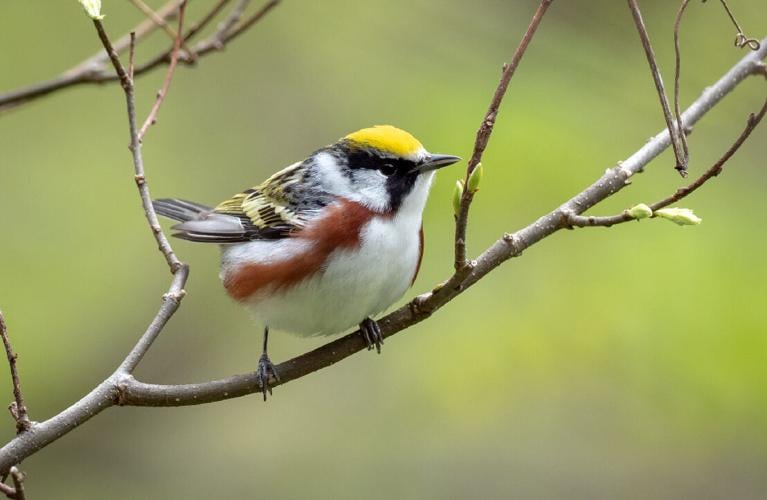 During its journey north from Central America and for most of the summer breeding season, the male chestnut-sided warbler sports a bright yellow cap and black bars above and below its eyes. (Michael Janke/ CC BY-NC-ND 2.0) 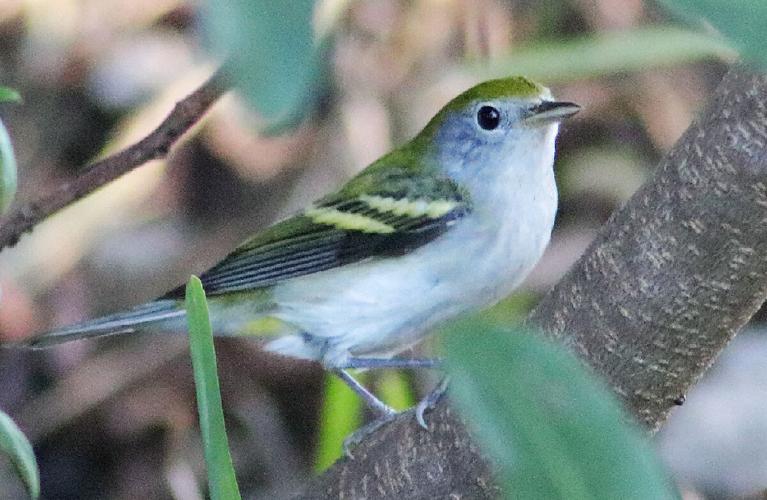 Timing is everything, as I am learning the hard way.

It’s early spring in the Chesapeake Bay watershed, time for nature to throw off its winter blankets and rise to its feet. The forest floor erupts in patches of skunk cabbage, bloodroot, spring beauties and Virginia bluebells. Dogwoods, mountain laurel and other understory trees and shrubs ready their blossoms. The large trees above them will soon leaf out, shading lower vegetation.

Early spring also represents the beginning of migration for an estimated 3.5 billion birds that winter in Central or South America. These neotropical migrants, as they are known, are a birder’s delight. Many are just passing through on the way to their breeding territory in the far north. For a short time, though, they bring color and variety to our landscape. Their glory is ephemeral.

The chestnut-sided warbler (Setophaga pensylvanica) is such a bird. During winter, the shade-grown coffee plantations of Costa Rica are this species’ epicenter. In late March, these songbirds begin their spring migration. Fattened up with the insects that thrive in tropical heat, the birds perform an extraordinary act of endurance and navigation. Drawing on these energy stores, they set out above the open waters of the Gulf of Mexico, flying nonstop to the U.S. shore.

If you live in Alabama, your best chance of seeing these colorful warblers in spring would be during the week surrounding April 1. Timing, you see, is everything. You can follow the species as it spreads across the eastern section of the nation, all the while moving north.

All along the Appalachian ridge from Georgia north, a few stop to breed. In piedmont and coastal Virginia, chestnut-sided warblers make their appearance in late April. In my part of Maryland, it’s more like May 3–10. They need to catch our insects emerging in the growing warmth of longer days. For some chestnut-sides, Pennsylvania is as far north as they need to go to find suitable breeding territory, but most continue into New York, New England and up into Canada. Many midwestern migrants stop around the Great Lakes to nest and raise another generation.

Like many birds, these warblers migrate at night — a perilous thing in modern times. Disoriented by lights, thousands are killed annually as they fly into buildings and TV towers. Those that survive establish breeding territory in young, second-growth forests, thickets and other sites with plenty of small and medium-size trees.

Typically, chestnut-sides produce a single brood annually. The breeding season runs from mid-June to early August. Breeding pairs are thought to be monogamous.

The female fashions a cup nest very low in a small tree or shrub. She lays three to five eggs (usually four) then sets about incubating them until they hatch 11–12 days later. The young are helpless. Fed by both parents, they grow rapidly, and in just 10 days the hatchlings are ready for their first flight. Soon they will be fully fledged and prepared to leave their parents.

Not that I would know from first-hand experience, but the chestnut-sided warbler is a gorgeous, tiny bird. The breeding male has a bright yellow cap atop a white face. He has black lines through his eyes and a thick, black “moustache.” His chestnut flanks are unmistakable. The back and wings are black and yellow. Underneath, he is all white, from his chin to his tail. The female looks similar, but in subdued colors. She has the namesake chestnut sides, but instead of a yellow cap, hers is mossy green. Her underside, instead of bright white, is pale gray.

Although just 5 inches from tiny beak to tail tip and weighing less than half an ounce, the male chestnut-sided warbler sings a loud tune throughout the breeding season. The song establishes territory and attracts its mate. Usually it is rendered, “pleased, pleased, pleased to meetcha!” The final note is strongly accented.

As soon as his partner is on the nest, though, the singing stops — except for occasional territorial disputes. His voice has done its job for another season.

The warbler’s diet consists primarily of insects, particularly moth and butterfly caterpillars and fly larvae. An active forager, this bird hops from branch to branch, examining the underside of every leaf. It has a distinctive posture while feeding — holding its tail high and drooping its wings low. Ornithologists aren’t clear why these warblers exhibit this foraging behavior.

Because this warbler usually feeds in low branches or brush — often at eye level — and is so active, the yellow or green cap and chestnut sides should make it relatively easy to see. But only if your timing is right.

My history with this bird has been one of frustration. I have missed the northern migration because of a packed work schedule, family obligations and pandemic shutdowns. Sometimes, my attention to the calendar has been better. Still, I have come up empty.

Central Maryland is full of second-growth forests and thickets — just the kind of layover habitat this warbler loves. As confirmed by eBird postings every spring, these birds are out there. For years, though, they have managed to evade my gaze.

Timing is everything. May 5, I’ll be out along the forest edge, scanning the trees and scrub as I look for this elusive bird. This year, I’m hoping to finally add the chestnut-sided warbler to my “life list” of birds. Wish me luck.