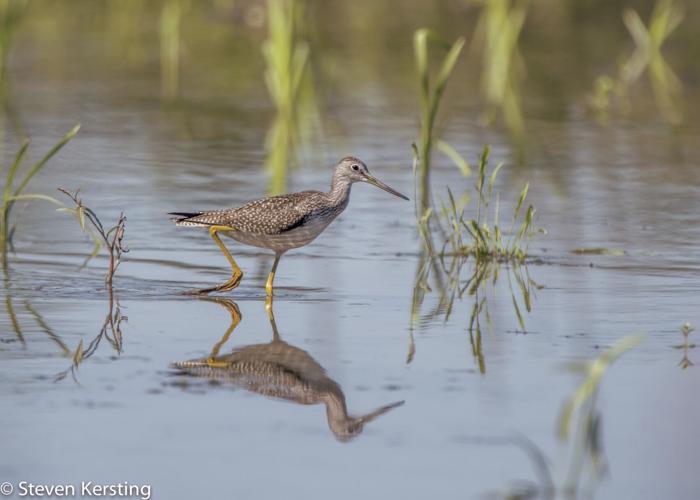 A greater yellow legs prowls the marsh for its next meal. (Steven Kersting/CC BY-NC-ND 2.0) 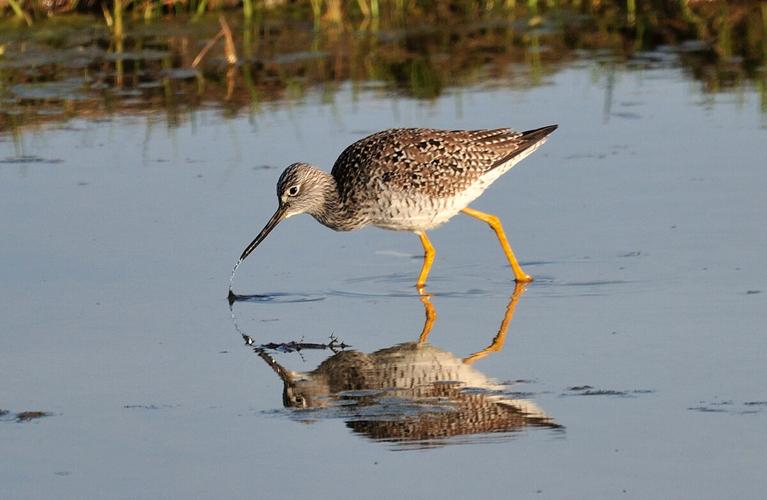 Sparkles of gold glinted off the water. The clear morning air was crisp, but brilliant May sunshine held the promise of a warm spring day. We stood on the shore, basking in the wonder of a beautiful day that starts with birding.

A few yards away, standing in hip-high water, a high-stepping shorebird was looking for breakfast. As the bird assertively probed the water column, we watched attentively through our binoculars.

Bigger than a typical sandpiper and smaller than a great blue heron, it was thick-bodied with a long, slender neck and small head. Dark brown feathers, heavily marked with white spots, covered its wings and back. Its head, neck and breast were pale with streaks of brown.

Most distinctive was its long bill. Heavy at the base, it quickly tapered to a thin tip. Caught at the right angle, the bill appeared to have a slight upward tilt. This was a greater yellowlegs (Tringa melanoleuca).

The nearly identical looking lesser yellowlegs differs only in size; it is noticeably smaller and finer-bodied. It looks almost dainty next to the greater. Interestingly, the two birds are not one another’s closest relatives in the Tringa genus. Some biologists identify the phenomenon as an example of “convergence,” defined as “the repeated evolution of similar traits in independent evolutionary lineages inhabiting similar environments.” In other words, the lesser and greater yellowlegs didn’t look much alike further back in their evolutionary histories. Facing the same environmental pressures, though, over generations they have developed a common set of visible characteristics.

The greater yellowlegs we were watching was in water up to its belly, hiding its eponymous long, yellow legs. It was eating small fish and aquatic invertebrates (such as crabs and snails), which form a major part of its diet. The bird also feeds on frogs, terrestrial invertebrates (such as beetles and worms) and the occasional seeds and berries.

We were at the Merkle Natural Resources Management Area. It’s a 1,900-acre gem along the Patuxent River, just south of Upper Marlboro, MD.

Merkle is part of a group of natural lands that protect both sides of a long, continuous stretch of the Patuxent River. It’s just downstream from Anne Arundel County’s Jug Bay Wetlands Sanctuary, which encompasses the Parris N. Glendenning Preserve. Also nearby are segments of the Patuxent River Park system, which is operated by the Maryland National Capital Parks and Planning Commission. Merkle is state-run. Protecting this ecosystem is an example of cooperative conservation at its finest.

Merkle is best known as a magnet for thousands of wintering geese. And more than 220 bird species have been identified on the property, giving strong testimony to the wisdom of protecting natural corridors.

Greater yellowlegs are solitary and often on the move. In the Chesapeake Bay region, the best time to see them is during spring migration. In Delaware, Maryland the District of Columbia, the peak occurs in April and the first two weeks of May.

The greater yellowlegs we saw at Merkle was likely on its way north to breed. (Because the sexes look alike, there was no way to determine if we were looking at a female or male.) The species breeds in the sub-Arctic boreal wetlands of Canada and Alaska.

The birds seek out a special kind of marsh called a muskeg. These wetlands include bogs with extensive peat moss and marshes with lots of decaying, floating vegetation. The sites are remote and brimming with mosquitos during the summer breeding season.

For a nest, the female greater yellowlegs scrapes out a small depression at the base of a conifer. She’ll lay a clutch of three to four eggs. Twenty-three days later the chicks hatch. They are covered in down and leave the nest almost immediately. One parent will lead the youngsters on a long walk, where the juveniles learn to feed themselves.

Just two days later, the youngsters take their first tentative flights. They will soon seek out water to expand their diets to include aquatic species.

In the fall, adult females are the first to head south from their breeding grounds, often before the young have fledged. Adult males are next, after they have concluded their job of protecting the young birds. The juveniles are last, as much as six weeks later. Consequently, the fall migration season is quite long.

Some of the southbound yellowlegs will stop

at the Chesapeake and settle in for the winter. More of the birds go as far as the Gulf Coast

states, from Texas to Florida. Still others

some going as far as the southern tip of Chile. In the spring, they head back to Canada.

I had no way of knowing, of course, but I couldn’t help wondering if the yellowlegs we were watching had come all the way from the far end of Chile.

At Merkle, we continued watching it actively forage. I considered what the bird meant to me. Along with its cousin the lesser yellowlegs, the bird was a marvel of evolutionary biology. The species engages in one of the most extraordinary migrations in the world. It was feeding here because so many visionary conservationists had worked together to protect these lands and waters.

But first and foremost, the greater yellow-legs was simply a bird, here in a lovely

setting on a wonderful spring morning.

For the moment that was more than enough. I sighed, smiled and pulled the binoculars up for another look.