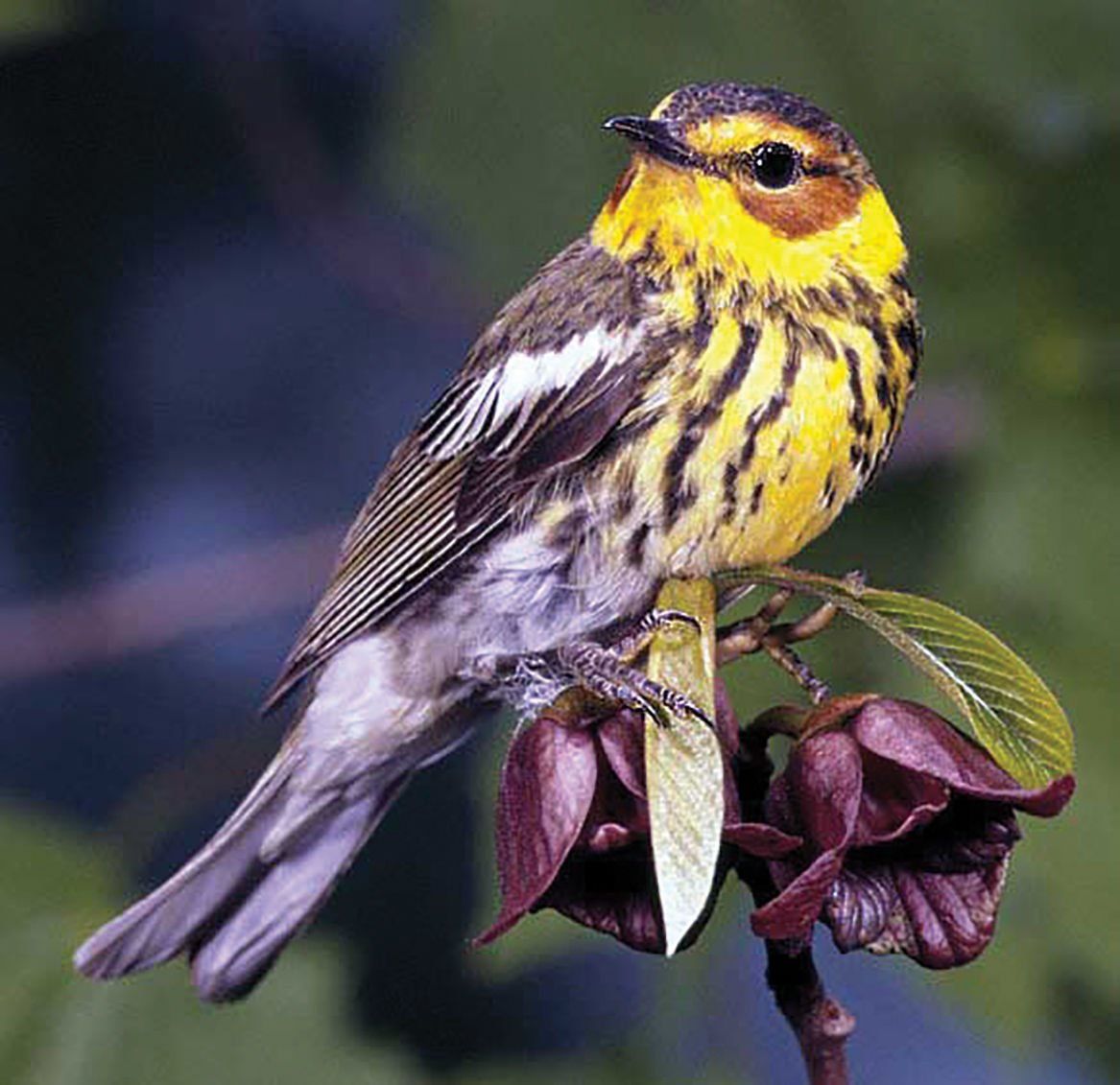 The chestnut cheek on this Cape May warbler tells the world that it is a male. The female has a gray cheek. (U.S. Fish and Wildlife Service) 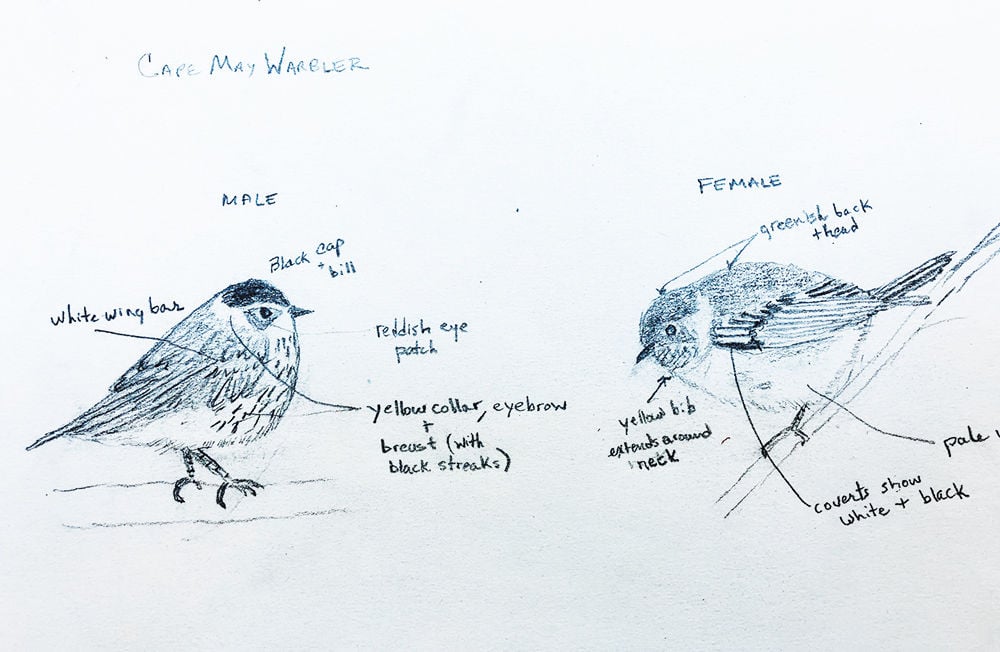 Sketches help the artist develop an eye for detail that not only helps to identify a bird’s species, but its gender as well.

Initial reports started to come in during the final days of April. By the first week of May, the eBird sightings turned into an avalanche. Birders were appropriately social distancing, but that wasn’t stopping them from some major league backyard birding. The spring migrants were coming through, and reports of Cape May warbler sightings were hard to keep up with.

The male Cape May is one of the prettiest wood warblers in the Americas, a real prize every year. Stuck close to home, I wasn’t able to see one this year, but I was enjoying the electronic postings. The tiny bird is an arresting combination of bright yellow, jet black and mossy green. The male also has a handsome chestnut cheek patch and flashing patterns of white on wing and tail. This multi-hued bird is a visual delight.

It is also badly named.

Today, Cape May, NJ, is a birding mecca. Sitting at the southern tip of the state, bordering the Delaware Bay and the Atlantic, it is a natural funnel for migrating species. In the spring, birds heading north “fall out” at Cape May, the first land they encounter after arduous overwater flights.

In the fall, it’s the last stop for birds to feed and rest before embarking on the return trip over the Bay or ocean. Sure, this warbler has been seen in its namesake town, but so have literally hundreds of other species.

A more accurate name might be spruce warbler, given its preference for these conifers. Or maybe the French-Canadian name, Pauline tigree (tiger warbler), which stresses the bird’s tiger-striped undersides and echoes the species’ Latin name: Setophaga tigrina.

In truth, it got its name solely because the first specimen described in scientific literature was taken from Cape May more than 150 years ago.

Regardless of what you call it, the Cape May warbler is a fascinating little bird.

Here in the Chesapeake watershed, the Cape May only stops on its way elsewhere. The species winters in the West Indies, from Puerto Rico and Cuba west to Central America. It leaves the tropical forests in the early spring, coming into Virginia in late April and making its way up through New York and beyond in May. The birds are heading to the spruce-fir forests that stretch from Saskatchewan to Nova Scotia. A modest number will breed in the forests of the upper Great Lakes and northern Maine.

Few species are as intricately linked as the Cape May warbler and the spruce budworm, an insect that eats conifer needles. Viewed as a major pest, the budworm (the caterpillar stage of the budworm moth) is a widely distributed forest defoliator. It is also the primary food for Cape May warblers on their breeding territory.

The boom-and-bust cycle of budworms corresponds with that of the Cape May warbler. In northern Ontario during the last century, population densities ranged from 70 pairs per square-kilometer in the 1940s, to zero pairs in the 1950s, back up to 148 in the 1980s. The heavy, widespread use of organophosphate pesticides in 1975–76 destroyed most of the pests. Consequently, the Cape May population dropped by 91%, hit by the double devastation of pesticide poisoning and starvation.

Because of this up-and-down population cycle, the Cape May produces large (for warblers) clutches of about six eggs. During times of plenty, the species expands its population by as much as 13% annually.

The female builds its nest high in spruce or fir trees. She also does all of the incubating of the eggs. Dad chips in once the chicks are hatched. Both parents feed the young.

Female Cape May warblers are a paler version of their male companions. Instead of jet black, the same areas are a muted gray. The cheek patch is also gray. The young look like their mothers until they reach their adult feathering. Birds are ready to breed by age one.

With its reliance on spruce budworms in its breeding territory, you might wonder what Cape Mays do for food on their tropical wintering habitat, which lack towering spruce trees. Not surprisingly, it is a radically different diet. Unique among warblers, the Cape May has a semi-tubular tongue that enables it to drink nectar from tropical flowers.

Maybe this bird should be called the hummingbird warbler.

The wintertime Cape May doesn’t completely forgo insects. It consumes lots of spiders, beetles, flies and the like. Working its way through trees and shrubs, the warbler gleans insects, sips nectar and eats small fruits, easily meeting its dietary requirements.

What are we to make of this strange and wonderful little bird?

Maybe the Cape May name for this warbler is just fine.

Names alone don’t tell us much. Only by getting to know the specifics about an individual can we really get at the truth. It takes a bit of effort, but the reward can be another fascinating glimpse of life. Regardless of what you call it, that’s a wonderful outcome.