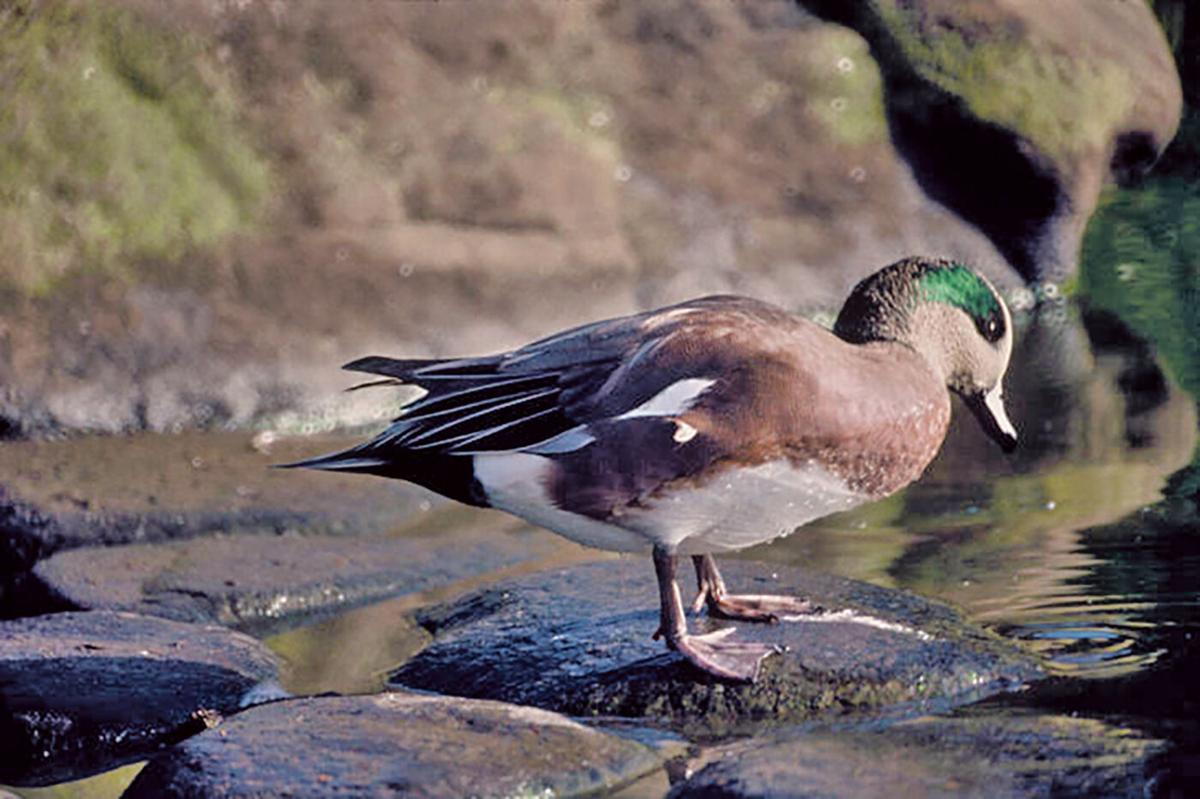 The male American wigeon (Mareca americana) is recognized by the brilliant green swoosh of eye patch and a white spot right in front of its black tail. (Lee Karney/U.S. Fish and Wildlife Service) 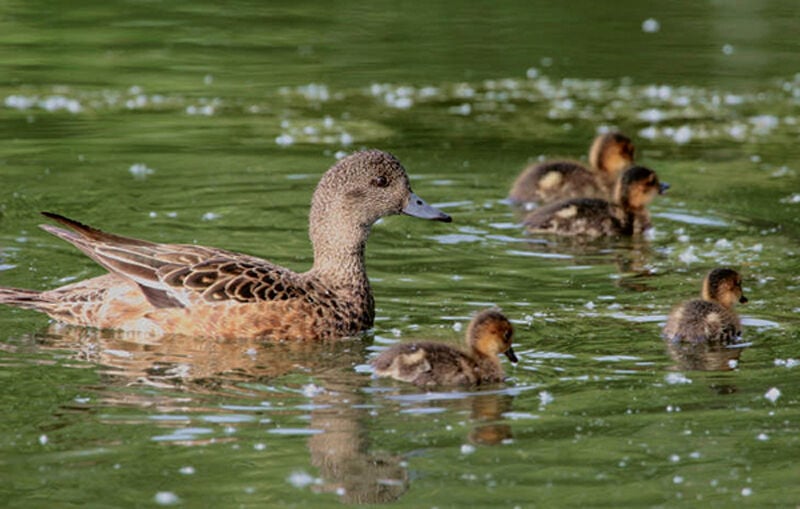 The female American wigeon, shown here with ducklings, has black smudges around her eyes and is browner overall than the male. (Donna A. Dewhurst/U.S. Fish and Wildlife Service)

On a cold January day a few years ago, my wife, Pat, and I spent a wonderful morning at the Blackwater National Wildlife Refuge near Cambridge, MD, viewing thousands of geese, swans and ducks as well as the refuge’s amazing array of bald eagles. A few white pelicans made a distant appearance as well.

We ate sandwiches and homemade soup in the car, then took yet another trip to the incomparable Harriet Tubman Underground Railroad National Historical Park, adjacent to the refuge. Every time we come here, I leave with renewed respect for Tubman, a diminutive woman who became an icon of resistance among the enslaved people in antebellum and Civil War America.

The short time standing in the visitors’ center left me with an aching hip. I handed the keys to Pat as we departed. There would be no more driving for me that day.

A cranky hip didn’t stop me from wanting to add more Bay ducks to our viewing bounty. We had to drive through Cambridge on the way home. I begged for a stop to see the winter ducks that congregate there along the Choptank River. Pat gave in with little resistance.

Darkening clouds carrying snow showers were bearing down on us as we turned off Hambrooks Avenue onto Oakley Street. This would have to be a quick trip.

The Choptank sluiced under the jersey barrier at the end of the block. The snow was quickening as we got out, binoculars in gloved hands. Before us were rafts of gorgeous ducks bobbing on the windswept waters. I glanced up. The opposite shore, more than a mile away, was lost in the snow.

We could still see the ducks in the middle of the broad, tidal river. There, we could just make out the big white spots on the black heads of the buffleheads and the picturesque black-and-white patterns of a few long-tailed ducks.

Just a few feet away, though, sloshing alongside the jersey barrier, was the real object of our pursuit: scores of winter ducks. The raft included plenty of canvasbacks, a handful of redheads and scaup, and a good number of American wigeon. This was a real bonanza. Wigeon are often called “bald pates” for the white forehead and crown that gives the male the look of a bald man. A dramatic green eye patch reaches toward the back of the head, just like a green-winged teal. The male wigeon has a gray face and neck and a pale blue bill that is rather short and narrow and ends in black.

The wigeon is a dabbler, like a mallard, feeding on duckweed, milfoil and especially widgeon grass. But they also feed alongside geese in fields as they use that short, tough bill to rip vegetation free.

The back and sides of wigeon are a sinuous rosy brown down to the waterline. In males, a white spot occurs right in front of the black tail. Elegant, elongated black feathers lined in white lay on his rear when he’s at rest. I had a big smile as I admired this handsome drake.

The female is a beauty in her own right. There’s no arresting green eye swoosh or bald pate. Instead, her head is a series of wavy brown and white feathers, except for black smudges around her eyes. The hen is a bit browner overall than the drake, but she has the same lovely lines.

In flight, the birds show mostly white underneath. The male also has a big white panel on its upper wing, just above a bright green speculum (wing feathers that are close to the body). The female has a simple white line above her speculum, which is black.

While most birds enter their breeding plumage in the spring and raise their broods in the summer, ducks put on their breeding feathers in the winter. Here in the Chesapeake region, we get to see the birds at their most colorful. This is also when pair bonds are established.

By early spring, wigeon will have left the Bay heading toward their breeding territory. Most will go all the way to the boreal forests of Alaska and western Canada. A moderate number will stop in the upper Midwest “prairie pothole” region.

Nests are built near ponds and lakes. The hen lays a single clutch of three to 13 eggs. The eggs need to incubate for almost a month, but when they hatch, the chicks are quick to leave the nest, heading to water to evade land predators. Even on water, though, they will face mortal danger from hungry fish and turtles. The bird’s first year of life is full of peril.

As winter approaches, these ducks disperse down both coasts. On the Pacific Coast, American wigeon winter from Alaska south to Central America. On the Atlantic, you’ll find them from Massachusetts south through the Caribbean and into northern South America. Wigeon can also be found in all of the Eastern states south of Pennsylvania, especially throughout the Chesapeake.

Finally, the worsening snow squall was upon us. Our viewing window had closed.

Life, like the storm, seems to come at us with unrelenting speed, occasionally bringing new limitations like a hip that suddenly needs to be replaced. But at other times, through accidents of timing and luck, those constraints are held at bay just long enough for moments of transcendent joy that lighten our hearts for a lifetime.

The weather had given us such a moment.  With an indelible memory of beauty in the natural world, the New Year was off to an auspicious start.