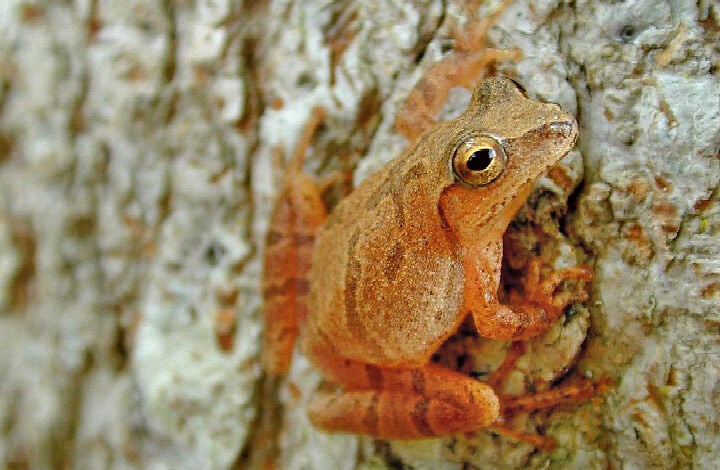 The markings on a spring peeper help it to blend into the bark of trees and leaf litter. This helps it hide from predators such as birds, salamanders, snakes and spiders. (Wikimedia Commons/USGS) 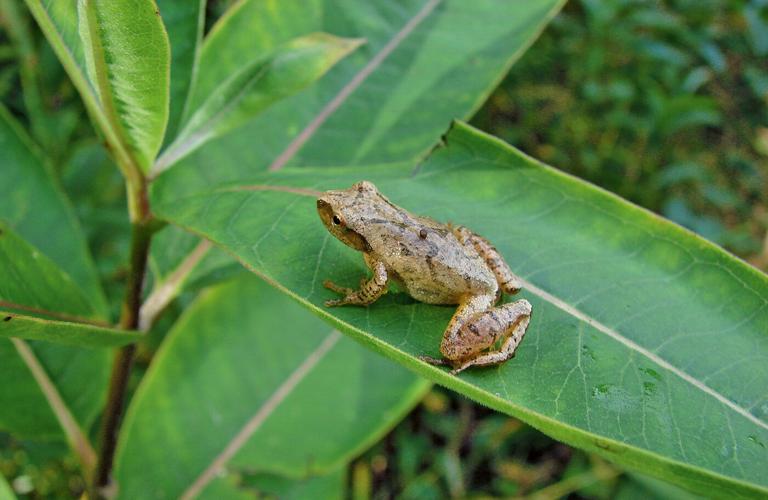 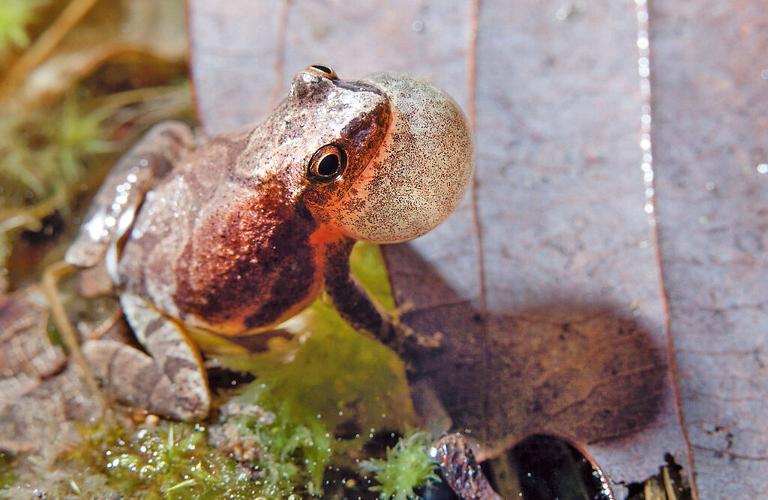 The peeper’s vocal sac, like this one in a vernal pond in Kings Gap State Park in Carlisle, PA, balloons out as it sings to attract a mate.

Go outside on a March night after temperatures have been in the 50s for a few days. If you are near a wet area, you are likely to hear the “lusty” chirping of one of the Chesapeake Bay watershed’s four chorus frog species — the southern chorus frog, upland chorus frog, New Jersey chorus frog and northern spring peeper — looking for love.

A peep at the pond's pop star

The northern spring peeper is the most widespread of the chorus frogs in the eastern United States and Canada. How widespread is your knowledge about this springtime serenader? Try your hand at this quiz. Answers are below.

A. Backup horns on vehicles

B. Fingernails on a chalkboard

2. Wooded areas near swamps and ponds (vernal or permanent) are prime peeper mating habitat. Where is a peeper most likely to be calling from? Pick two.

A. Middle of the pond/water

3. Although the peeper prefers to stay on the forest floor, it is the only chorus frog in the watershed that climbs trees, thanks to large sticky pads on its toes. When they climb a tree, what is the general height limit?

4. Early in the breeding season (March to June), a peeper may do something it doesn’t do the rest of the year. What?

A. A hoppy mating “dance”

B. Peeps during the day

D. Swims upside down to show off its vocal sac

5. A male peeper sings to attract females to its breeding territory, which is only 4–16 inches in diameter. Females prefer larger older males. How can they tell who’s who?

6. Chorus frogs’ backs are marked with spots or stripes. What is on the back of a spring peeper in some form (and is the source of its Latin species name, crucifer)?

D. There are no patterns

7. Which is longer, a northern spring peeper tadpole or adult?

8. To avoid freezing to death in the winter, most frogs in colder climates bury themselves deep in oxygen-rich mud to hibernate. The peeper crawls behind loose bark on trees or under leaf litter and logs. What prevents it from freezing solid? (A spring peeper may hide in mud or deep water in the summer to escape extreme heat.)

A. It produces a form of glucose and “freezes” itself while hibernating, returning to normal when temperatures rise.

B. Its skin produces a hard shell that keeps the cold out.

C. It eats a lot of fireflies in the fall, which keeps the frog warm all winter.

D. It surrounds itself with many layers of leaves, forming insulating “peeper balls” that can be as wide as 1.5 feet.

Farmers in southern New Jersey (where I grew up on a dairy and produce farm) said that the frogs are an accurate harbinger of spring. "They have to sing three times [warm stretches separated by silent cold nights] before spring is here," according to my late father.

When I was a child in Annapolis living on the water we had an invasion (thousands) of small frogs that were very small. Would this have been this type of frog ?

[thumbup] Thank you so much for this article! I hear the peepers this time of year and didn't know anything about them but that they were very loud. I also had never seen a picture of one. I enjoy their sound because it means spring is coming.