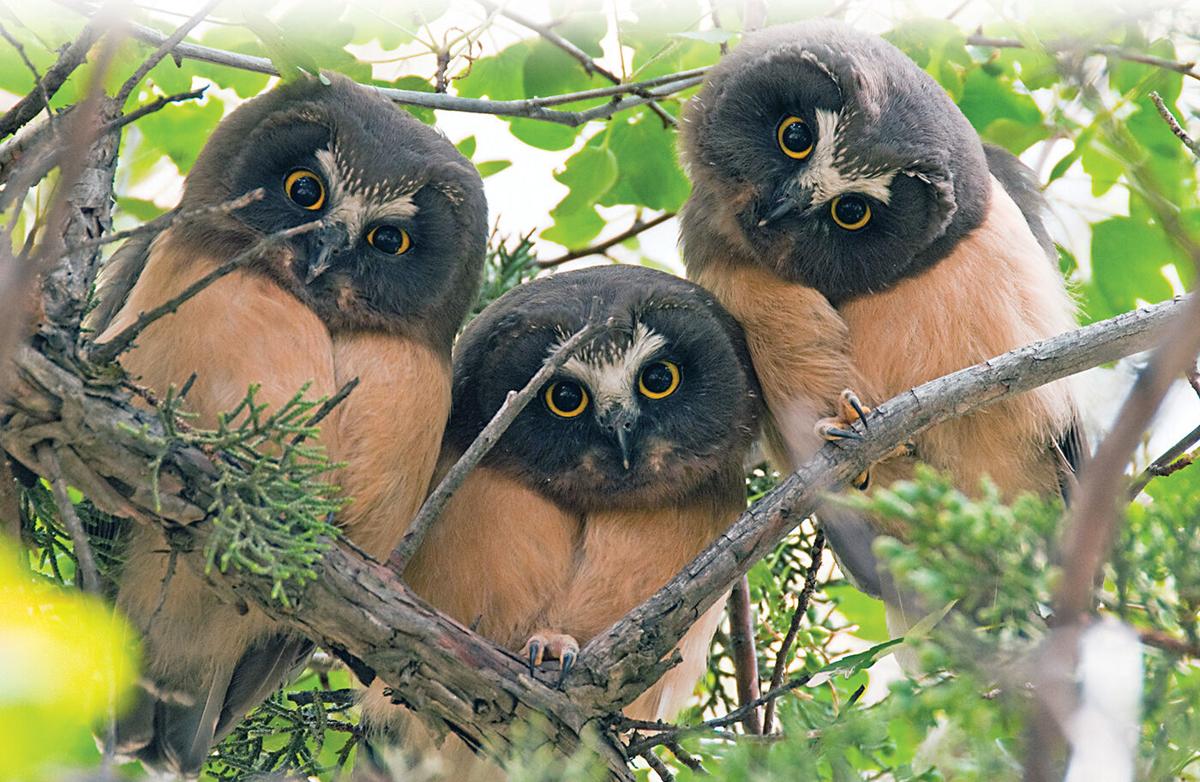 Juvenile northern saw-whet owls look totally different from their elders. The young birds develop adult plumage when they are about a year old. (Sam May / CC BY 2.0) 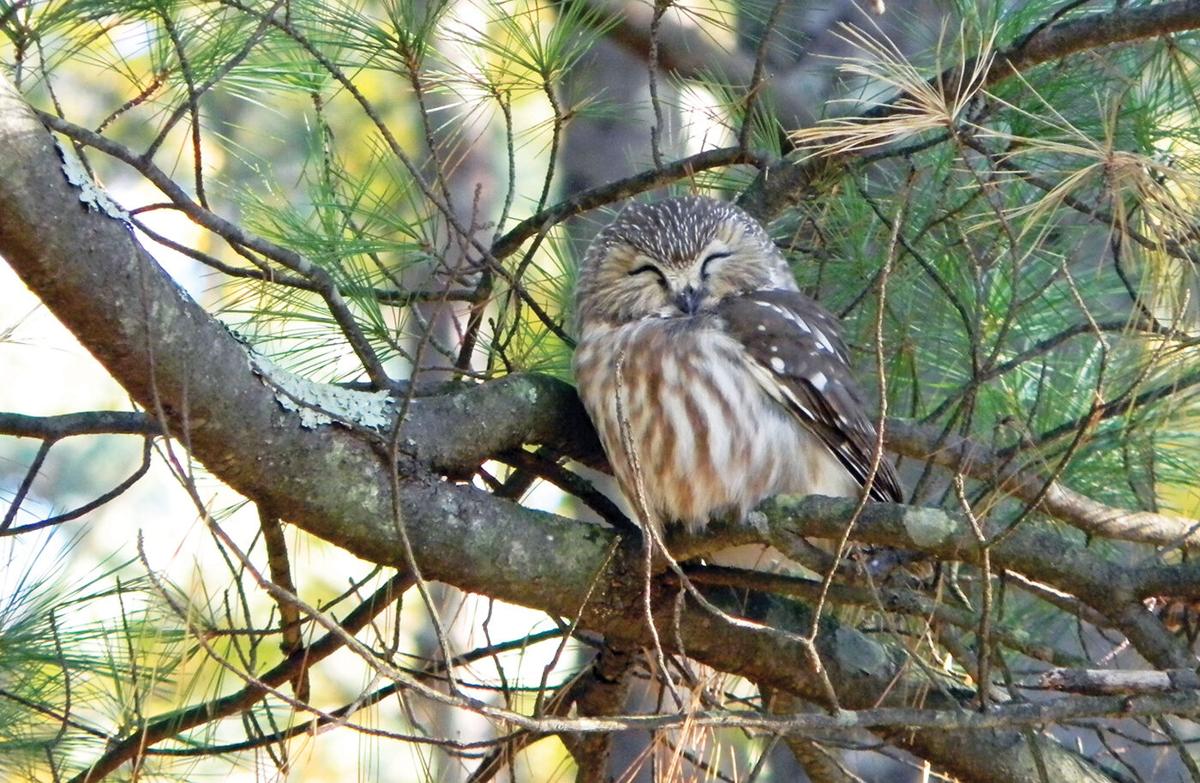 The fluffiness of this saw-whet owl’s feathers reveals that it feels relaxed. When the bird feels threatened, it lengthens its body and wraps a wing around its front, hiding its legs and feet. This helps the owl blend in among the branches

of its perch. (Bri Rudinsky / U.S. Fish and Wildlife Service)

Hoot’s Who Here: There are 19 owl species in North America. Four of these — barn, barred, eastern screech and great horned owls — are common and breed in the Chesapeake Bay watershed. Three others breed in the region: saw-whet (less common) and the short-eared and long-eared (rare). Snowy owls, which show up in the Bay region almost every year, are classified as “visitors.” A burrowing owl showed up unexpectedly in Maryland in 2020, but that species is not a regular visitor and the guest appearance was classified as “accidental.”

Eye bet you didn’t know this: An owl’s eyes are eye tubes, not eyeballs and can’t move on their own. But the bird can move its head 270 degrees (135 degrees in each direction) to help it spot its prey.

The silence before the silenced: The edges of an owl’s flight feathers are serrated. This allows the air to pass through them without a sound. The owl’s prey never hears it coming.

Talented toes: Want to sound as wise as an owl? Tell your friends that owls are zygodactyl, then explain that this means they have two forward-facing and two backward-facing toes on each foot. But owls go one better than other zygodactyl birds: One of their back toes can pivot forward to help them grip objects or walk.

Parliament: The term for a group of owls.

Blessing or blight? Depends on where you live. Ancient Greeks believed owls brought good fortune. Romans, on the other hand, thought they were an omen of death. In Welsh folklore, if a pregnant woman heard an owl, her child would be blessed. Folk stories from Southeast Asia held that owls would eat newborn children.

Extreme strigiformophobia: In some central-west African cultures, it is said that fear of owls is so extreme that the bird is known only as “the bird that makes you afraid.”

Tiny as it is, one would never mistake the northern saw-whet owl for a songbird. Its name is derived from the “skiew” call it makes when it is agitated or alarmed. Those who have heard it liken it to the sound of a saw that it being whetted (sharpened). Here is a quiz about this nocturnal creature that will help shed light on it and other owls. Answers are below.

1. The saw-whet is only found in North America and is one of the continent’s smallest owls. How small is it?

2. Although saw-whets are found in a variety of habitats, even occasionally in suburban areas, its preferred habitat is:

3. Owls usually swallow their prey whole. Indigestible material — teeth, skulls, claws, feathers — can injure the birds’ digestive tract, so the owl’s gizzard compacts these materials into a tight pellet that it then regurgitates. All of the prey listed below have been found in saw-whet pellets. Which two are found most often?

4. Saw-whets’ most common predators are

hawks and larger owls. Whose pellets are saw-whet remains found in most often?

5. The saw-whet (and other owls) can accurately pinpoint its prey purely by sound. What allows this?

A. One ear is higher than the other.

B. Each ear opening is shaped differently.

6. The saw-whet’s territorial song isn’t much more melodic than its alarm call. What does it sound like?

A. Fingernails on a chalkboard

B. Static on the radio

7. The age of a saw-whet (and a few other owls) can be determined by looking at the underside of the wings. What do biologists look for?

A. The underwings start out pale beige and turn darker as the bird ages.

B. The underwings add a stripe each year the bird ages.

C. The underwings glow neon pink under an ultraviolet light. The brighter the color, the younger the bird.