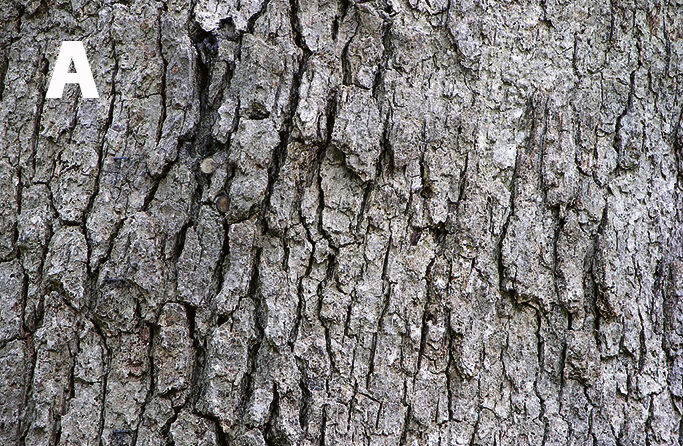 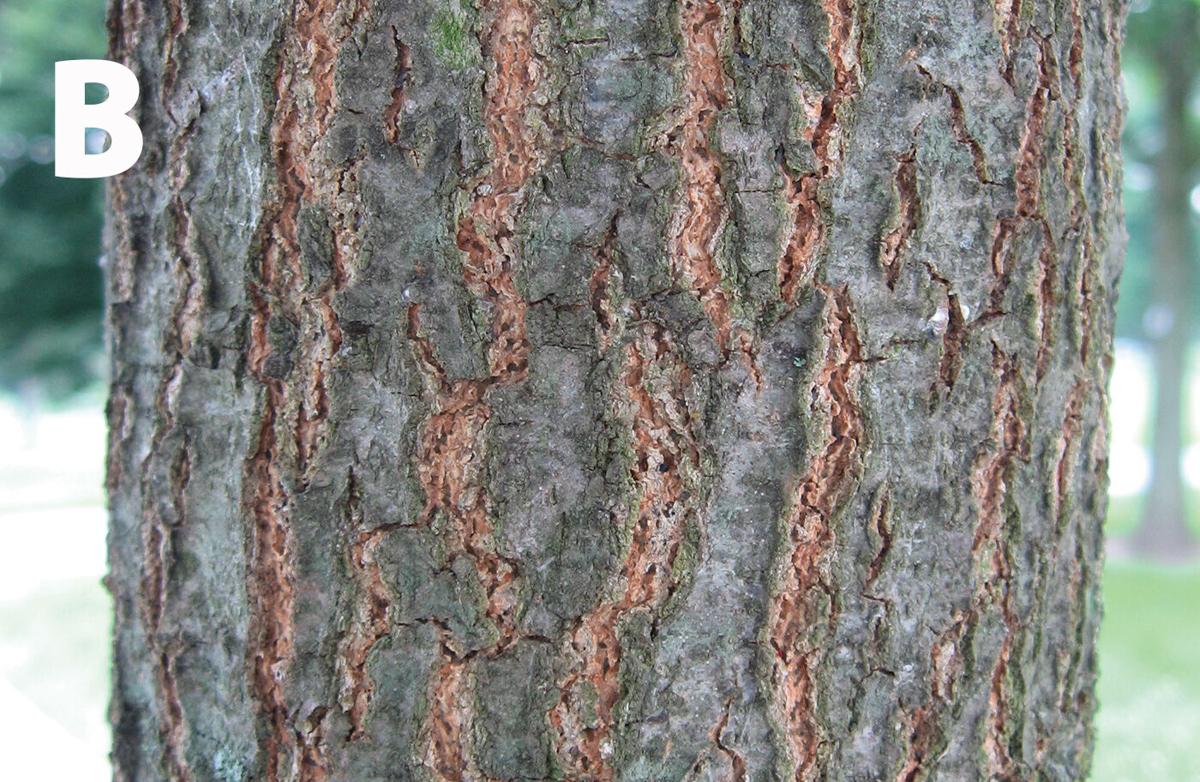 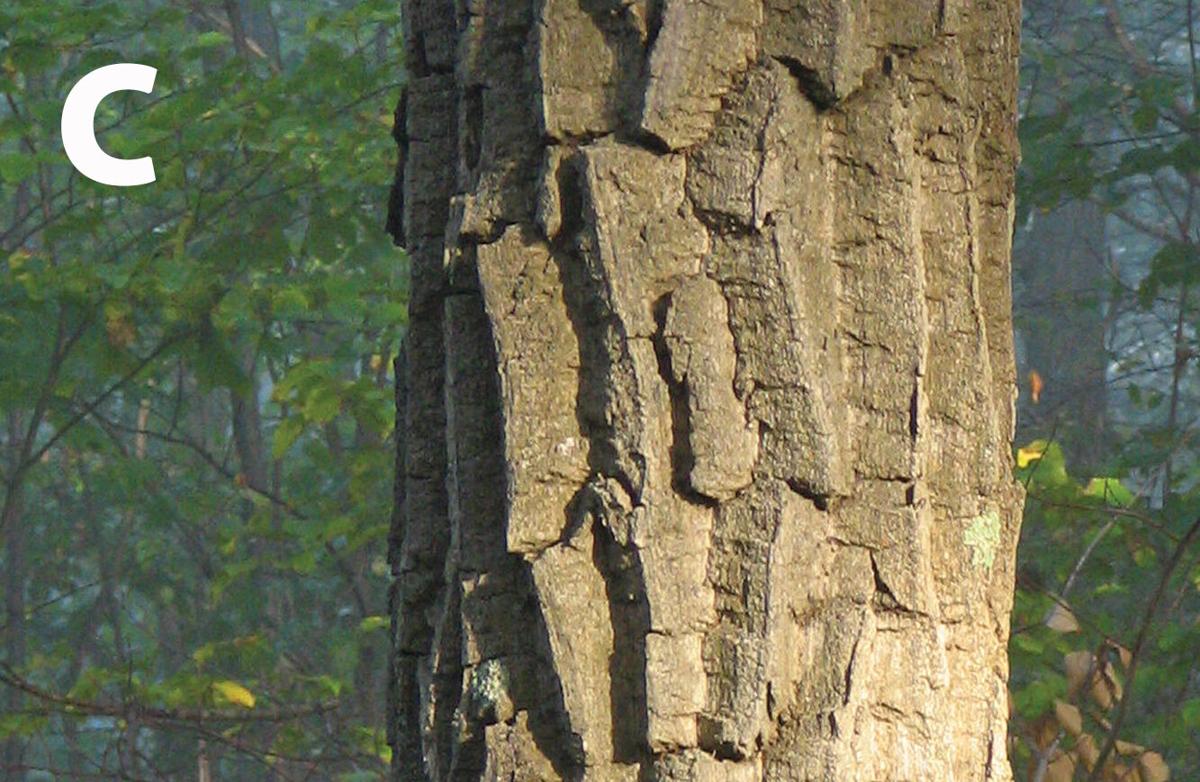 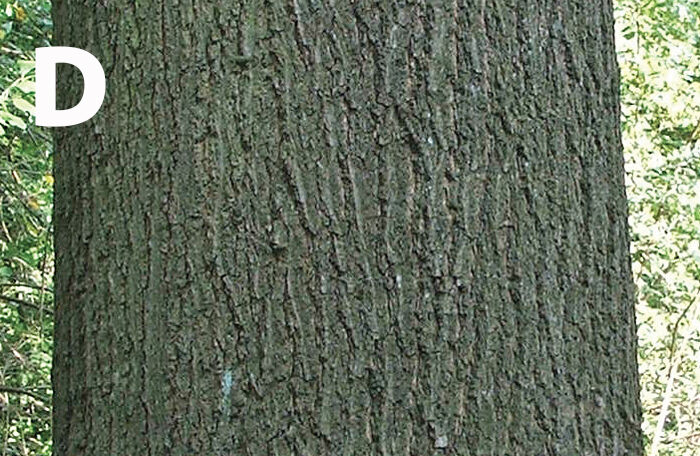 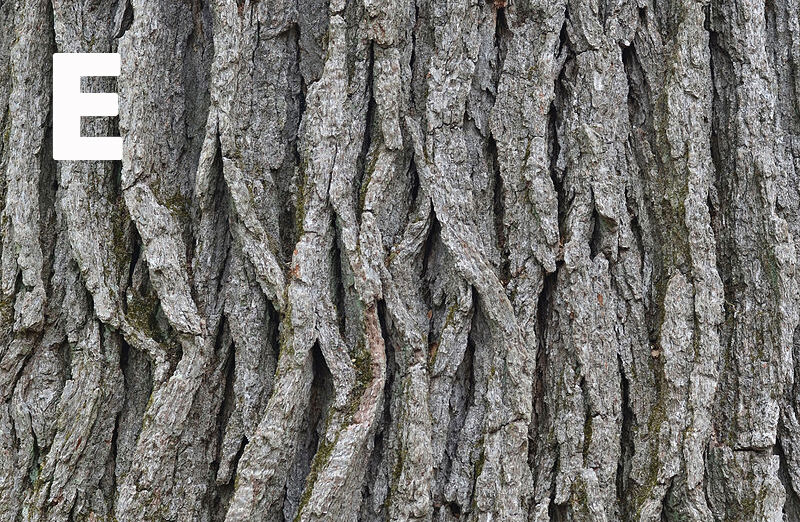 “Every oak tree started out as a couple of nuts who stood their ground.”  — Henry David Thoreau

Stood their ground, they did. On average, only one in every 10,000 acorns becomes a new tree.

Bark offers trees all-around protection from outside forces. It is the first line of defense against insect pests. It helps the tree from turning soggy when it rains, and protects the tree from losing moisture during dry spells.

It continually grows from the inside, acting as insulation from heat and cold.

Winter is a great time to observe a tree’s bark. Here are the descriptions of five oaks in the watershed that are highly valued for providing food and shelter for wildlife, as well as shade and beauty in the landscape. Can you match the descriptions with the photos on this page? Answers are below.

1. My bark starts out gray and smooth but roughens with age, turning black and furrowed to reveal a reddish inner bark. I can withstand drought better than many trees. My newly unfurling leaves have a reddish hue before turning green, and my red fall leaves last long into winter.

2. My dark, deeply fissured bark is the thickest of the Eastern U.S. oaks. It contains high levels of tannin and was extensively used to tan leather before the 1900s. (My lumber was actually thrown away at this point.) Once it was discovered that my wood is almost rot-proof, it became popular for items made from wood that touch soil, such as railroad ties and fences. I can grow as wide as I am tall.

3. The grooves of my light gray bark form rectangular scales, which can occasionally peel off. I’m the tallest oak species and, although slow-growing, I can live for hundreds of years, longer than many oaks. My wood is strong and waterproof and was prized for building ships. To this day it is used to make barrels for wine and whiskey.

4. My bark starts out smooth and reddish gray but roughens and turns gray as I get older. Still, my bark is relatively smoother than other barks in this quiz. I am mostly found along rivers or in flood plains — my species name means “marshy.” I am able to self-prune, dropping useless branches as needed or stopping growth altogether. The former leaves knotholes that make my lumber less desirable.

5. My dark bark consists of deep furrows separating flat ridges that breaks off easily. My acorns are recognized for containing the least amount of tannin and need little preparation to be made edible. I grow more rapidly than most oaks. I am tolerant of mucky and wet soil.