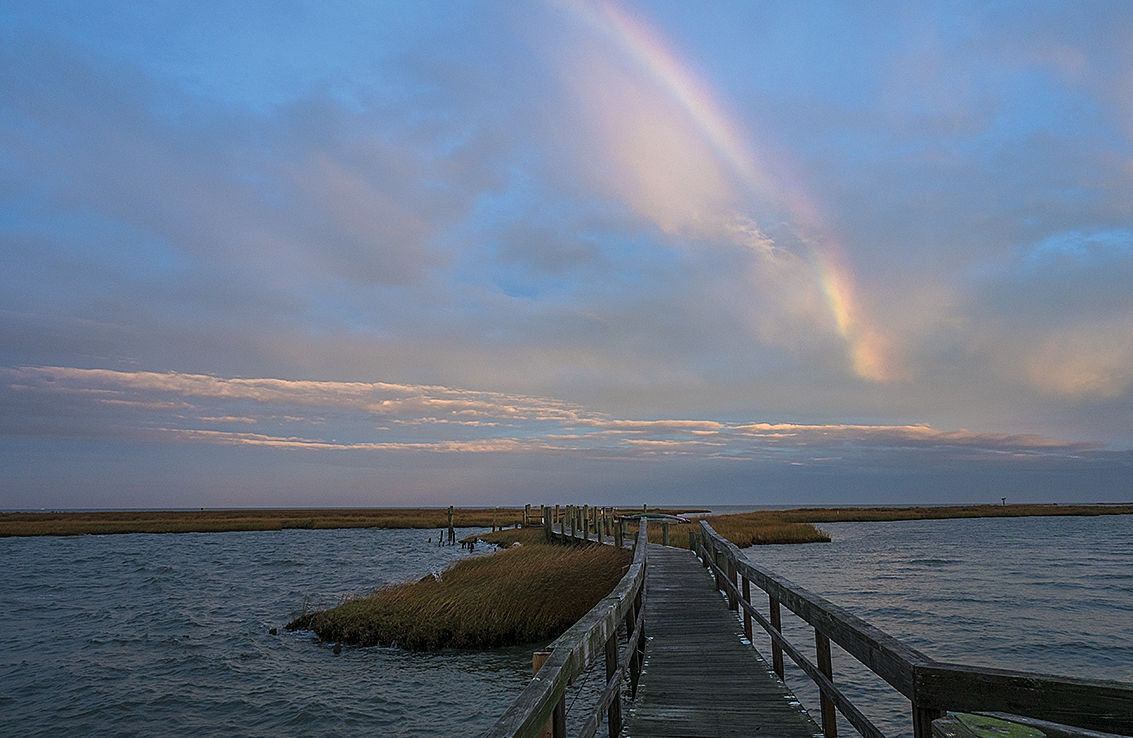 A cold front moves through Tangier Sound at sunrise, producing a rainbow over the boardwalk at Fox Island, VA, in the Chesapeake Bay. 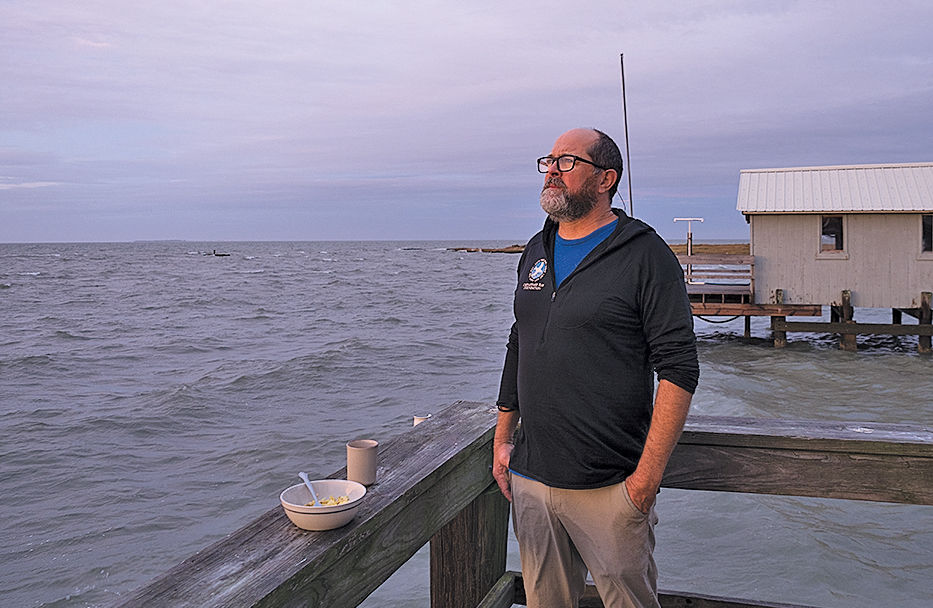 Paul Willey pauses his breakfast to take in the sunrise on Fox Island, VA, in the Chesapeake Bay. 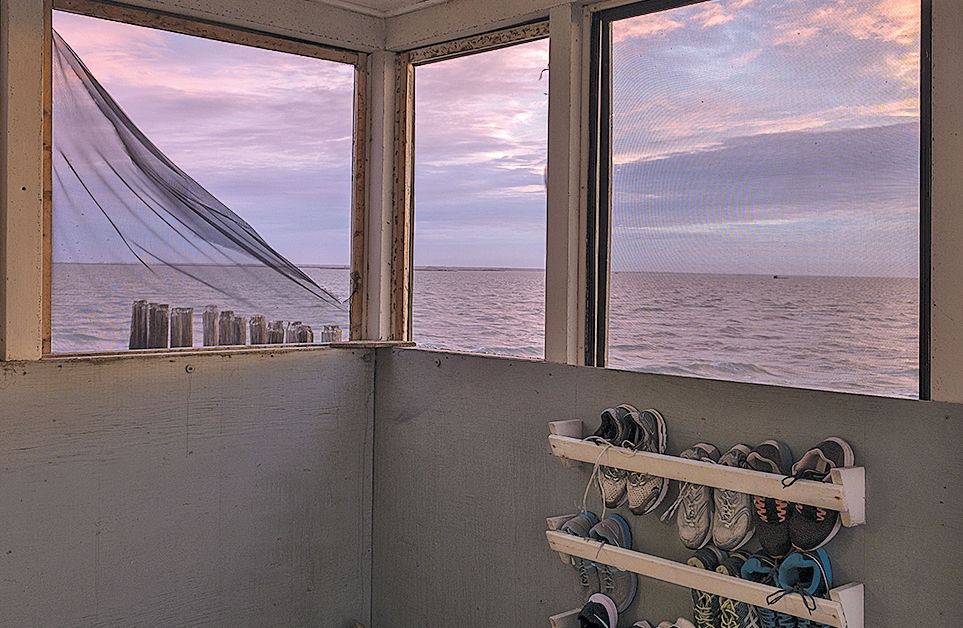 Shoes left by students at the Chesapeake Bay Foundation’s Fox Island Education Center are a reminder of the building’s most recent use. Formerly the Fox Island Rod and Gun Club, the center was closed by the foundation due to loss of marsh and rising tides and is now for sale.

I was just 33 when I met her, turning 50. A 40-year relationship ensued — intimate, though I shared her with so many others. And now we’re parting.

The 11-bedroom lodge on Great Fox Island, built in 1929 amid protective tidal marshes at the juncture of Tangier and Pocomoke sounds, was a base for waterfowlers for her first half-century.

In 1976, she was donated to the Chesapeake Bay Foundation, a young organization formed around this simple notion: Get schoolchildren out on the Bay, show them all that makes it special — and vulnerable. Teach them to care.

Fox Island, which I had the pleasure of managing for CBF during a hiatus from writing, afforded literal immersion in the wonders of the Chesapeake, built as it was on pilings that let the waves roll beneath it, shuddering the whole structure as the tide rose and the wind sang.

Leafing through decades of students’ journals as we helped CBF’s Paul Willey “decommission” the place recently, a word frequently encountered was “mud”; mud as in wallowing in it head to toe, faces so muddy the whites of kids’ eyes pop from old photographs.

Mud is the essence of our shallow estuary, the literal bottom line. “You’ve got mud between your toes,” say the folks of nearby Smith and Tangier islands. It means you’ve bonded with the Bay.

Willey was wistful. I understood. I had hired him here on the dock of the old lodge 30 years ago, and he’s been with Fox ever since, now director of operations for what has grown into one of the nation’s finest environmental education programs.

The lodge was the first of four residential education centers CBF would build. I estimated 16 years ago that Fox Island had worked its magic on some 18,000 school kids who came for three days and two nights.

Equally impactful was how Fox Island nurtured so many young educators who lived and worked there through five decades, and who have gone on to run environmental programs across the country. One of them, Cindy Dunn, is now Pennsylvania’s secretary of conservation and natural resources. And there’s Bo Hoppin, now heading the amazing Hurricane Island Center for Science and Leadership in Maine. Bo graced the June 1993 cover of National Geographic, silhouetted by a rising sun as he leapt across a row of tall pilings outside the Fox Island lodge.

The genius of Fox was that it was just so out there, miles from the grid, from the sounds of human traffic. Kids rode an improvised stationary bicycle in the kitchen to pump water for washing and cooking. Composting toilets handled waste; solar panels and a wood stove handled electricity and heat.

I loved to climb with kids to the crow’s nest atop the lodge, predawn. We’d watch as light began dividing day from night, dawn tugging color and texture from the void, distinguishing land from water, revealing creatures of the air and the sea, winging and splashing to the horizons.

One looked upon all of this and knew that it was good — this everyday beginning at Fox Island — and a fair summary of God’s creation from the first chapter of Genesis.

And now it’s the fall of 2019 and Fox Island is closing, teaching the world a last lesson. Erosion from the Bay’s wind and waves has been nibbling away for centuries at the marshes and beaches that buffered the place from storms and offered sheltered coves and creeks for kids to canoe and kayak.

But climate change and rising sea levels are accelerating the erosion to the point now that it is becoming dangerous to continue the mission there.

If memories were concrete and good karma was cash, there’d be more than enough of both to just wall the place in, give it another lease on life. Even then, the spirit would have gone out of the place. So it’s time — CBF is taking bids to sell it, though it’s hard to imagine who will want it now.

Paul Willey was taking down the “Great Fox Island” sign he’d carved back in 1992. He said he’d always thought the building would go before the land.

I reminded him that the lodge almost did go in Hurricane Isabel in 2003 (a few hundred thousand dollars in repairs bought another 16 years); and I’d bet the owners in 1954 made extensive repairs after Hurricane Hazel, which roared straight up the Chesapeake, instead of veering east of the Bay, as most do.

We can fix hurricane damage; rising sea levels and sinking landscapes are another story. Indeed, on Willey’s mind are CBF’s three other residential education centers, at Tangier and Smith islands and on the Bishops Head peninsula of lower Dorchester County. All are exactly where they should be, on the bleeding edge of land and water, to maximize the Chesapeake educational experience. And all are exactly where they shouldn’t be so long as we refuse to take our climate crisis seriously.

After seeing off the press folks CBF had hauled out on Halloween eve from Washington, Baltimore and Norfolk to spread the last lesson of Fox Island, we hooked and released dozens of rockfish from around the old lodge, keeping a couple for dinner. One educator recalled once catching rock from his bedroom window there. So amazing, so typical, so going away.

I’ll leave you with a tale of Fox magic from the late Dallas Bradshaw, a Smith Islander who served as boat captain and world’s greatest storyteller for years there. Kids loved Dallas and the job was therapy for him after the tragic drowning loss of his own son.

Dallas taught a group of schoolchildren to dangle a big jimmy crab off the dock, tied by a string to his flipper. At the right season, Dallas knew, the sex pheromones exuded by male crabs beckon irresistibly to lady crabs ready to shed their shells and mate.

The jimmy soon “had himself a wife” — and another and another, as the kids removed the ecdysiast females and redangled the jimmy.

Talk about coitus interruptus. Talk about frustrating. One time, though, Dallas heard the kids shrieking for him to come look: The jimmy had come up not with prospective wives, but with a large pair of barnacled, orange-handled scissors, dropped and covered by mud long ago.

“I took those scissors and cut him loose. Don’t you agree he deserved it?” Dallas asked me. The scissors were added to decades of bones and shells and art and other Bay memorabilia enshrined on the wall of the lodge.