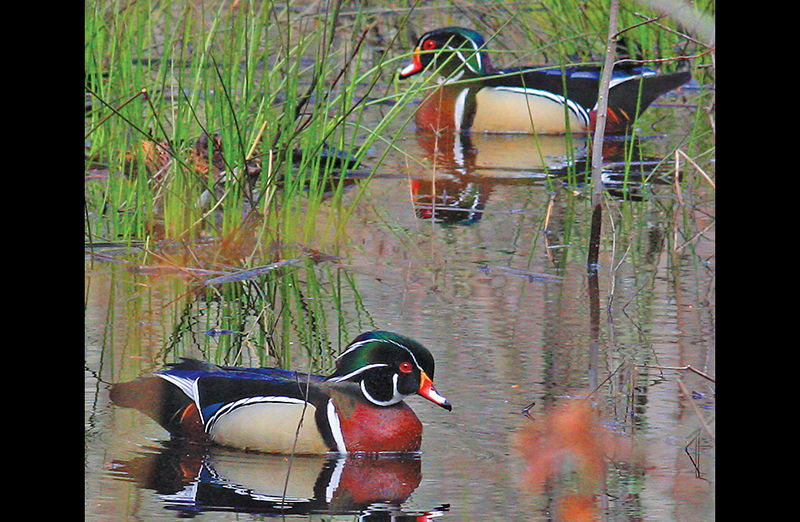 Two drake wood ducks, right, rest in a wetland. The bird came close to extinction a century ago because of the loss of habitat and unregulated hunting practices. (Leopoldo Miranda / U.S. Fish and Wildlife Service) 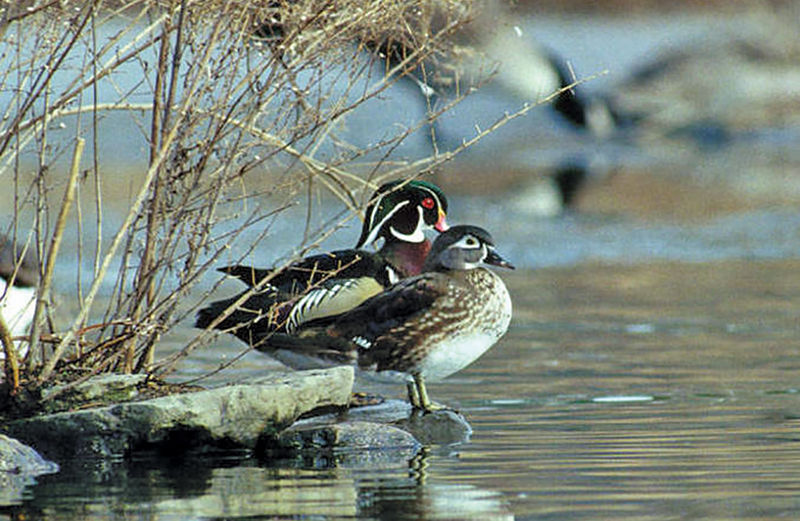 The wood duck hen, above right, though not as colorful as her mate, left, still has a striking plumage. (U.S. Fish and Wildlife Service ) 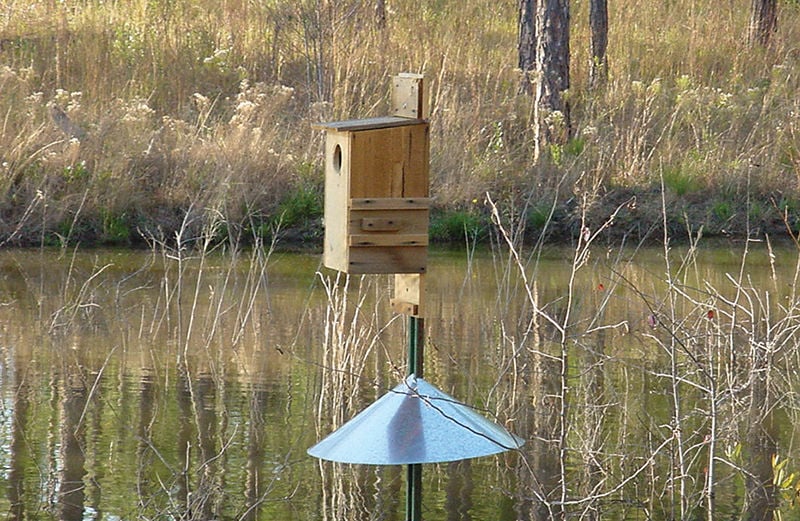 Nest boxes have helped to compensate for the loss of tree cavities, the wood duck’s preferred nesting site. These, along with conservative bag limits, have helped the bird make a comeback. (U.S. Fish and Wildlife Service)

Two drake wood ducks, right, rest in a wetland. The bird came close to extinction a century ago because of the loss of habitat and unregulated hunting practices. (Leopoldo Miranda / U.S. Fish and Wildlife Service)

The wood duck hen, above right, though not as colorful as her mate, left, still has a striking plumage. (U.S. Fish and Wildlife Service )

Nest boxes have helped to compensate for the loss of tree cavities, the wood duck’s preferred nesting site. These, along with conservative bag limits, have helped the bird make a comeback. (U.S. Fish and Wildlife Service)

For many Chesapeake Bay watershed residents, mallards and resident Canada geese are the most common waterfowl encountered. These two species are also quite comfortable around people so they get close enough to be easily identified.

But, explore forests near rivers, streams and ponds during the warmer months and you’ll likely come across one of the most beautiful ducks in North America; the wood duck (Aix sponsa).

The wood duck’s beauty is reflected in its name. From the Greek word “aiks” for water bird and Latin word “sponsa” for betrothed, the name infers that a wood duck looks like it is dressed for a wedding.

Early colonists aptly called them summer ducks. Other names include the Carolina duck, because of where it was first described; the swamp duck, because of its preferred habitat; and the acorn duck after one of its favorite foods.

Both drakes (males) and hens (females) have crested heads ending in hood-shaped manes. The drake’s head is iridescent green, blue, purple, black and white. Its eyes and eyelids are red, and throat and breast are brown with lighter brown on its sides and belly.

Hens, like most other female birds, have duller plumage colors, but are still striking. Their heads and necks are gray and bodies are brown. Sporting a smaller mane, the female has a white teardrop patch around her eye.

The call of the male wood duck is a delicate squeak, while the female has a much harsher call. The female’s alarm call is a loud “weeek.”

Wood ducks, so named because they nest in tree cavities, are found in wooded swamps and woodlands near ponds, streams and rivers. Their range nearly coincides with the United States’ border and at one time the wood duck was considered as a possible national symbol.

Courtship begins and pairs start to form from autumn into spring. Nesting begins between mid-January in the Deep South, and early April in the northern part of its range. Old growth timber provides some of the best nesting cavities.

The female builds her nest in a tree cavity, usually 30 feet or more above the ground or water. The nest cavity is lined with down and wood chips. Wood ducks often reuse the same nest year after year. Some wood ducks double brood, meaning they nest twice in a single year. They are the only North American waterfowl to do so.

Ducklings are born precocial, meaning they are mobile, downy and can find their own food. They remain in the nest only 24 hours after hatching. The hen calls them out of the tree cavity from the water or ground below. Using their sharp-clawed feet, the nestlings are able to climb out of the cavity and leap down, landing near the mother hen waiting below. The young will never return to their nest again. The ducklings are able to fly 56–70 days after hatching.

Eggs are preyed upon by raccoons and opossums, as well as some snakes and birds. Snapping turtles, mink, large fish and snakes prey on the flightless ducklings.

In the past, unregulated hunting was a huge threat to wood ducks. Large roosts of migrating wood ducks made them easy targets for market hunters who provide game meat to grocers, restaurants and hotels. Hunting and the loss of habitat resulting from poor forestry practices and clearing for development almost caused the wood duck’s extinction a century ago.

In 1918, the Migratory Bird Treaty Act protected all migratory waterfowl from market hunting. Soon after, both the United States and Canada banned the taking of wood ducks. To address the loss of natural tree cavities for nesting, state game departments, hunting organizations and federal agencies began installing nest boxes that wood ducks readily used. In 1942, hunters in the Atlantic Flyway were once again allowed to hunt wood ducks. (Contact your state wildlife management agency for hunting season and limits.)

Today, this lovely bird is again a common sight in the Chesapeake Bay watershed. But the wood duck’s survival depends on the continued conservation of forested areas along streams and rivers.

We benefit, too. In addition to providing homes for wood ducks and other wildlife, these forests capture sediment and nutrients coming off the land, which improves water quality. Sustainable forests also provide wood and paper products important for many local economies. Finally, forests provide a place for recreational activities like hiking, camping, hunting and fishing.