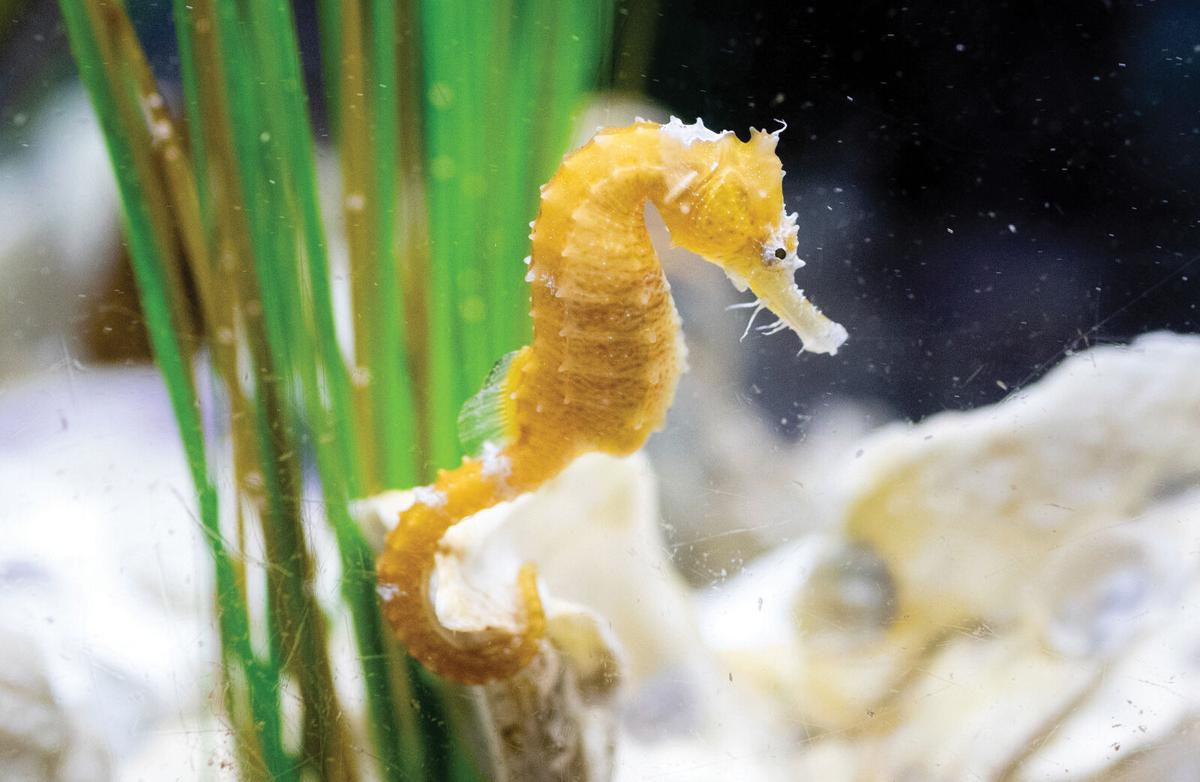 A lined seahorse, can change its color, which makes it difficult to find in the wild. 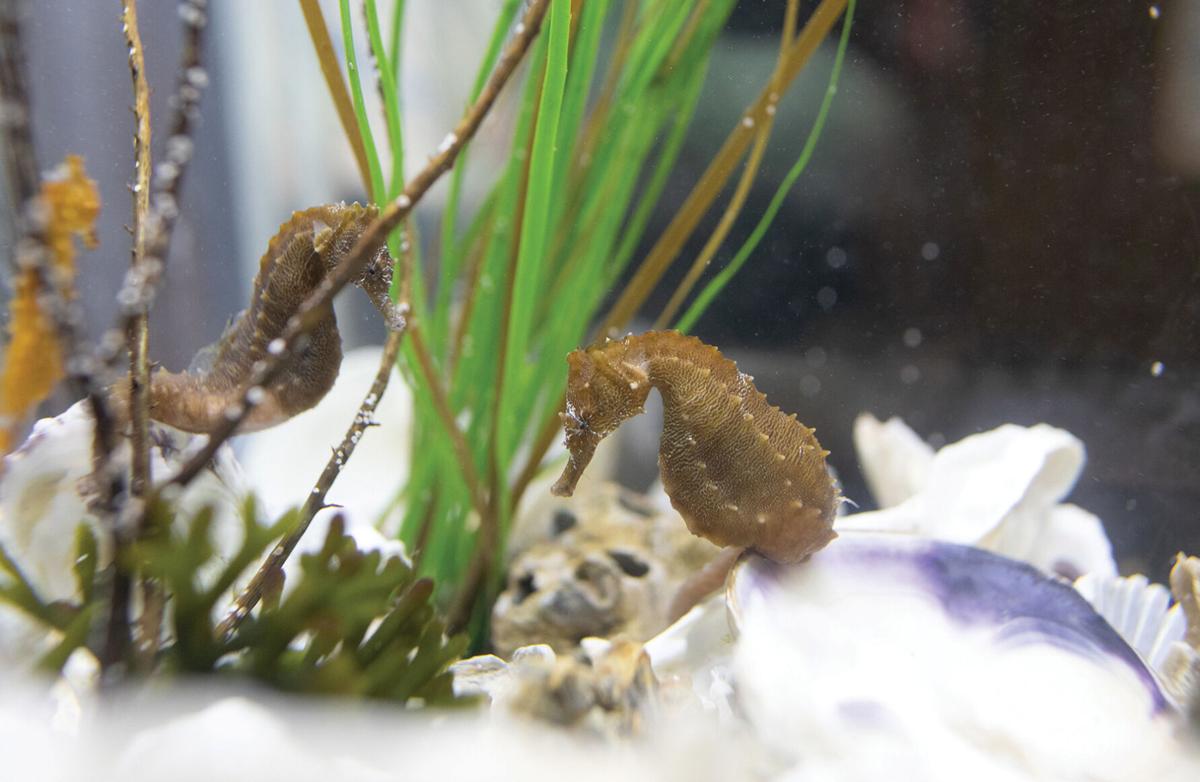 Lined seahorses anchor to underwater plants at the Virginia Living Museum. When mating, the male seahorse incubates 100–300 of the female’s tiny eggs for two weeks before they hatch.

In the Lower Chesapeake Bay, a small horse moves through the underwater beds of eelgrass looking for food. No, it’s not a pony like the famous wild horses of Assateague Island National Seashore. It’s a lined seahorse (Hippocampus erectus), the only species of seahorse found in the Chesapeake Bay.

The lined seahorse inhabits a range from the northern point of Nova Scotia, Canada, to the southern area of Venezuela in South America. Locally, lined seahorses are usually found from the Lower to Mid Chesapeake, although in drier, saltier years they may move as far north as Maryland’s Bay Bridge.

Seahorses are vertebrate fish belonging to the family Syngnathidae. Other family mem­bers include the sea dragon, ghost pipefish, sea moth and pipehorse. The lined seahorse is most closely related to the pipefish: Both share the characteristic elongated tubular jaw with a small toothless mouth at the end.

The Chesapeake’s underwater grass mead­ows are the lined seahorse’s preferred habitat. It swims erect, pausing to curl its tail around strands of grass to stabilize its body, then stay very still. This skill, combined with the creature’s ability to quickly change its color, camouflaging its skin to match the surround­ings, makes the seahorse an ambush predator. It uses its long, tubular snout to suck in tiny crustaceans, plankton, worms and other invertebrates swimming by.

Effective camouflaging also helps to protect the seahorse from potential predators such as ray, fish, birds, crabs and sea turtles, as well as people, who collect them for medi­cines, aquaria or souvenirs. The seahorses’ sophisticated camouflage makes them hard to find, creating a few problems for scientists who want to learn more about the animals.

One of the most striking characteristics of this species is its reproductive cycle. In many fish species, parental care often falls to the male, which is responsible for fanning or guarding the eggs and making sure they remain oxygenated. Seahorses takes this a step further — the males actually guard and nurture the eggs in a pouch on their body.

After an elaborate courtship, which the monogamous pair may repeat during a later reproductive cycle, the female lays 200–300 eggs in the male’s pouch before he fertilizes them. The male provides oxygen and transfers nutrients to the developing embryos through a network of capillaries in its pouch. The young remain in the pouch for about two to three weeks, depending on water temperature.

After a convulsive “birth,” during which the male seahorse’s body expels the contents of the pouch, tiny juvenile seahorses emerge. The male usually becomes pregnant again almost immediately. Despite the frequency of these pregnancies and the volume of young produced, on average only two of the thousands of juveniles a pair produces reach maturity each breeding season.

In summer, the lined seahorses inhabit the shallower areas and swims to water only a few feet deeper in winter. The weight of their body “armor” and their erect habit makes the poor swimmers.

They spend most days feeding while attached by their tail to vegetation. And when they do swim, they use their dorsal fin (which beats 20–30 times per second) to propel themselves forward, gliding slightly up and down through the water.

Lined seahorse populations were assessed by the International Union for Conservation of Nature in 2017. It was listed as a vulner­able species because of its proximity to the highly populated coasts of North, Central and South America. Specific worldwide threats include bycatch in shrimp trawl fish­eries and collection for the aquarium trade, tourism curios and cultural medicines.

In the Chesapeake Bay, their population is considered stable. But the loss of their primary habitat from shoreline development and nutri­ent pollution could harm local populations. Reducing nutrient and sediment pollution and conserving our coastal shoreline habitats, particularly underwater grass beds, will help ensure the continued existence of this unique seahorse of the Chesapeake.

A nice article. I think the word "graze" in the headline was misleading, though, because seahorses do not feed on plant matter.