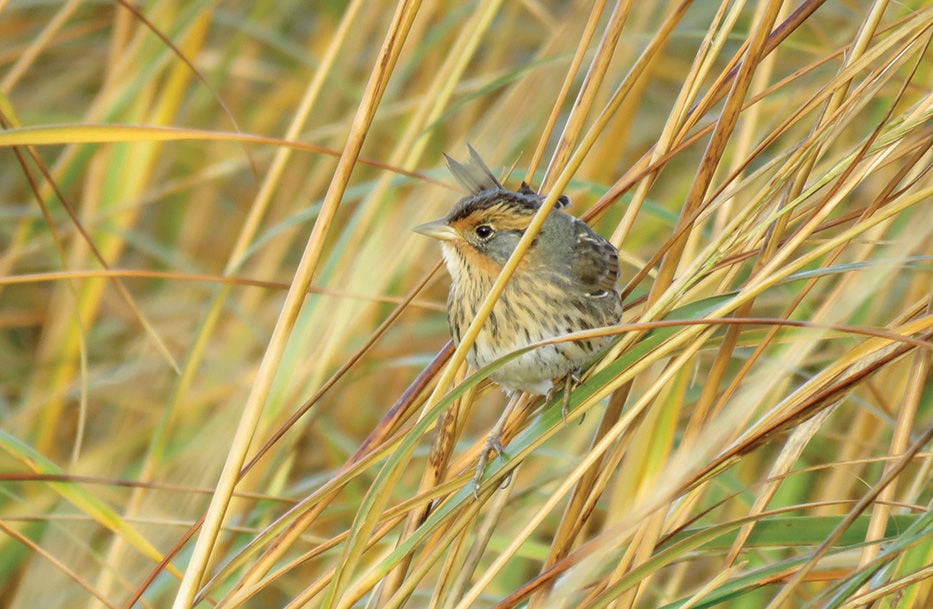 The saltmarsh sparrow is the only bird exclusive to East Coast salt marshes, nesting along the coast from Virginia to Maine. 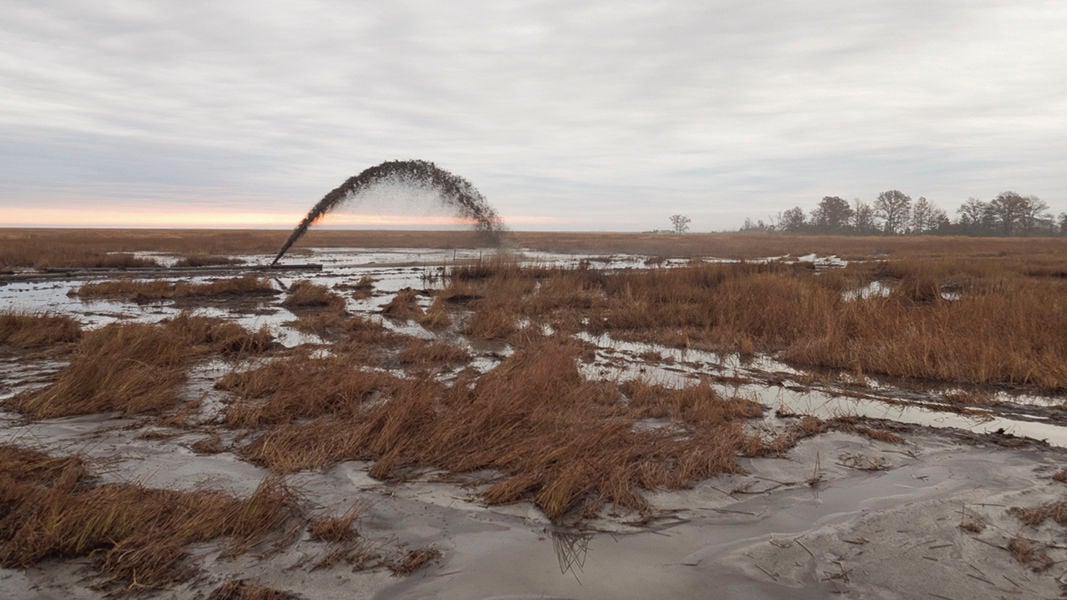 A project to preserve high marsh habitat transferred 26,000 cubic yards of sediment into a portion of the marsh at the Blackwater National Wildlife Refuge near Cambridge, MD, in December 2016. The process, called “thin-layering,” raised the surface of 40 acres of marsh. 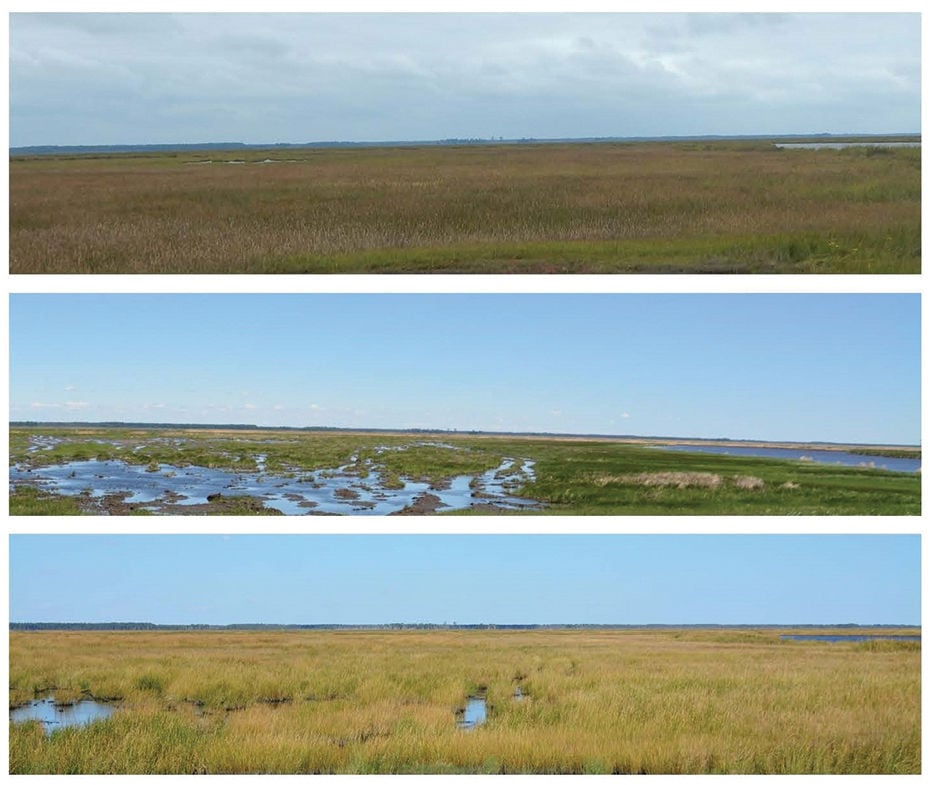 Along the Atlantic Coast, a quiet sparrow blends in with the grasses of the salt marsh. Often hard to spot as it gathers food to bring back to its nest, the saltmarsh sparrow is recognized by its orange eyebrow and moustache and black-streaked breast and sides.

The species is the only bird exclusive to East Coast salt marshes, nesting along the coast from Virginia to Maine. They make their nests in the higher parts of the marsh dominated by saltmeadow cordgrass (Spartina patens) and saltgrass (Distichlis spicata). Successful nesting is timed with the lunar cycle and tides. Spring tides, the highest high tides of the month, coincide with new and full moons, often flooding nests.

While these birds are adapted to typical monthly high tides and occasional large storm events, they are now threatened by increased flooding from rising seas and more frequent storms. The coastal marsh habitat that these birds need is being lost. High marsh is changed into low marsh no longer able to support saltmarsh sparrows.

Saltmarsh sparrow numbers have dropped as their high marsh nesting habitat is increasingly flooded by high tides and storm surges. Rangewide surveys have estimated a decline of about 9% per year between 1998 and 2012, indicating an overall loss of 75% of the saltmarsh population during that time.

Sea level rise and more frequent and intense storm events not only reduce nest success, but change the character of a marsh. As tidal waters move farther upslope, marshes can often migrate inland. Newly created marshes at the upland boundary may replace the lost older marsh. But in many places, this conversion is not producing vibrant meadows of marsh grasses. Instead, dying trees are giving way to open water or large stands of invasive phragmites, unsuitable nesting habitat for saltmarsh sparrows and other coastal wetland birds.

Although the threats may seem overwhelming, federal and state agencies, academic institutions and conservation organizations are coordinating on ways to conserve coastal marshes for saltmarsh sparrows. Pilot projects are already under way.

At Blackwater National Wildlife Refuge, 26,000 cubic yards of sediment (dredged material) from the Blackwater River were transferred in 2016 to a portion of marsh using a process called “thin-layering” to raise the surface of 40 acres of marsh. This project was implemented by the Audubon Maryland-DC and The Conservation Fund in partnership with the U.S. Fish and Wildlife Service.

Raising the surface of the marsh 4–6 inches will improve the health of marsh vegetation, allowing oxygen to reach the marsh plant roots and native marsh grasses to flourish and restore high marsh habitat.

Bird surveys have been conducted by Audubon and University of Delaware for the Saltmarsh Habitat and Avian Research Program. Results are encouraging. Although saltmarsh sparrows have yet to be detected at the restoration site, many bird species have returned, including salt marsh-dependent birds like the seaside sparrow.

Another project at Farm Creek Marsh, a 700-acre private sanctuary owned by Chesapeake Audubon Society, aims to improve the health of a newly formed marsh. Here, as trees die from saltwater incursion, they are replaced by marsh grasses. But the recently transitioned marsh is deteriorating due to the surface ponding of water. The new marsh lies in a shallow basin that prevents water from naturally draining to nearby tidal creeks.

To remedy this, the marsh was connected to the tidal creek by a 500-foot channel that mimics nearby natural creeks. This approach will not only drain the ponded water but also introduce tidal marsh hydrology to the site, reinvigorating vegetation growth and improving the marsh’s health and longevity.

It has only been one year since the channel was dug. No daytime bird surveys have been conducted this year, and visits for other purposes have yet to detect any saltmarsh sparrows. However, it may take a few years for the vegetation to change enough to become suitable for them.

There’s no simple recipe for saving saltmarsh sparrows and their marsh habitat from rising water. Each marsh has its own history, conditions and challenges. But there are several promising approaches to restoring and enhancing high marsh habitat.

Conserving lands to create corridors by which marshes can migrate, raising marsh elevation through thin-layering, improving tidal water exchange, planting transitional crops (switchgrass) in parts of agricultural fields that become saturated or too salty, and controlling or eradicating invasive plants and animals (like phragmites and nutria) are some of the tools that can be used to preserve healthy coastal marsh ecosystems.

Conserving these coastal salt marshes not only supports saltmarsh sparrows and other marsh-dependent wildlife. Our lives are affected, too. Healthy coastal marshes protect real estate from flooding, provide clean water and support multibillion-dollar fishery, recreation and tourism industries. Investing in our marshes is good for wildlife and good for people.

Thank you to Matt Whitbeck, Blackwater National Wildlife Refuge, and David Curson, Audubon Maryland-DC, for their assistance with this column.