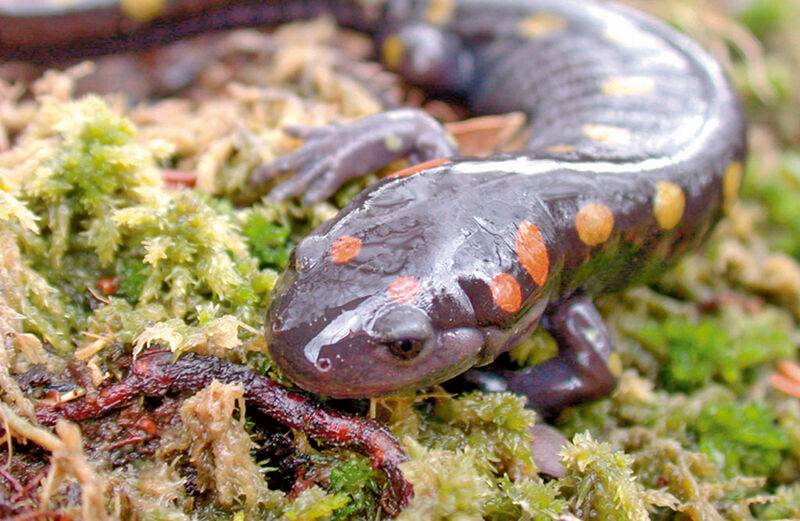 The life cycle of the spotted salamander is, like that of so many amphibians, entirely dependent on vernal pools. Like other salamander species, they often return to their birthplace to mate and create the next generation. (Smashtonlee0/CC-BY-2.0) 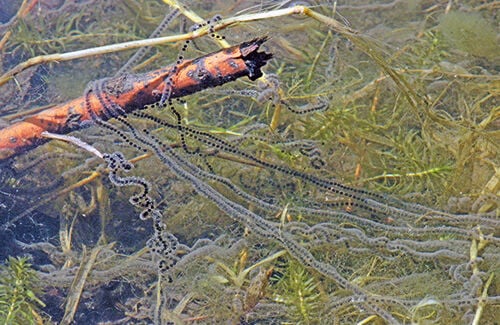 The American toad’s long double-stranded egg masses attach to vegetation or lie at the bottom of a vernal pond 3–12 days before hatching as tadpoles and living in the water for as long as 2 months. (Courtney Celley/USFWS)

Throughout the Northeast, spring rains are creating temporary pools in small depressions in woodlands and meadows. Known as vernal pools, these often small and inconspicuous areas are springing to life as frogs, toads, salamanders and other amphibians converge on them to breed.

The Greek word amphibios literally means “having a double life.” Amphibians spend part of their lives living in water and part living on land.

Most amphibians lay soft eggs in water. The eggs hatch into an aquatic larval stage, which looks and acts quite differently

from the more terrestrial adult stage. The most well-known examples are toads and most frog species — whose eggs hatch into tadpoles, which can only survive in water. As the larvae grow, they experience radical physiological changes, a process known as metamorphosis, transforming them into adults.

Vernal pools provide a temporary aquatic environment that supports both amphibian eggs and larvae. Vernal pools, which are isolated from other water sources, do not support fish that would prey upon them.

Unlike salamanders, the toads and frogs that converge on vernal pools call to attract mates. Not entirely unlike humans, frogs produce sound by moving air back and forth over their vocal cords, making them vibrate audibly. Even unseen, breeding species can be identified by their calls.

The wood frog (Rana sylvatica) migrates to vernal pools early in spring, often before snow and ice have completely melted.

The call of the wood frog is a hoarse clacking sound, reminiscent of a quack. The wood frog is an explosive breeder, usually laying a large mass of eggs in a few days and leaving soon after.

The spring peeper (Hyla crucifer), a type of tree frog, follows the wood frog by a week or two, leaving the trees to mate in open water. Its wide geographic range and unmistakable mating call, the peep, makes the spring peeper one of the most aurally familiar frogs in North America. Large numbers of them can sound like jingle bells. Its mating call can sometimes be heard up to half a mile away.

Another familiar amphibian is the American toad (Bufo americanus). Its habitat ranges from mountain wilderness to suburban backyards. You’re likely to find this toad almost anywhere that is moist, with plenty of insects to eat and shallow water for breeding — conditions that occur from March to July. Despite its warty appearance, the American toad’s mating call is a pleasant musical trill.

Across the world, amphibian populations are declining. Loss of forest and wetland habitats is a major threat. Many amphibians return to the same ponds and wetlands in which they were born to breed. If these natal areas are disturbed or lost, those amphibians will not breed. Beyond that, deforestation reduces the woodland habitat that many amphibians require as adults. Fragmentation is also a problem. As wooded tracts shrink in size, the remaining amphibians become isolated and inbreeding may occur, weakening the species.

Why should we care? Amphibians help us measure the health of the environment. They exchange water and air primarily through their skin. In addition, they can absorb pollutants that are in the soil and water. Like a canary in a coal mine, a local population’s decline may indicate a contaminant problem.

Amphibians possess many foul-tasting chemicals in their skin and glands to protect them from predators. Some of these chemicals may hold clues for medicinal uses. Drug companies are trying to replicate some of these compounds for heart medications, organ glues and pain killers. Aesthetically, many amphibians are extremely beautiful creatures that we should all have the opportunity to observe and enjoy. Frogs and toads are some of the first wildlife we interact with as children.

Protecting forested wetlands and woodlands is a first step to preserving amphibians. Vegetated buffer strips along waterways are equally important because they protect the health of rivers and floodplains, which are the corridors that connect isolated woodlands. Amphibians use these corridors to move between small pockets of existing woodlands and wetlands, helping to ensure healthy and diverse populations.

We all benefit from such conservation actions. These same areas are also habitat for a multitude of wildlife, including invertebrates, fish, birds and mammals. Protecting woodlands, wetlands and river corridors also reduces the amount of nutrients and sediment entering rivers and the Chesapeake Bay. In this increasingly concrete world, we all need places for retreat. Forests and wetlands offer us these retreats, to enjoy the serenades from the woods.

Do you want to play a role in conserving your local amphibian populations? Consider volunteering for a chapter of FrogWatch USA, which is run by the Association of Zoos and Aquariums. Volunteers are trained to listen for and identify the mating calls of frogs and toads during evenings from February through August and submit these observations to a national online database. Data are used to help determine the diversity of local frog and toad populations, identify rare or invasive species and discover any shifts in diversity, range or seasonal timing. Monitoring through FrogWatch USA can be an enriching experience, connecting you with nature while also contributing to amphibian conservation. To find a local chapter, go to aza.org/frogwatch and click on “Frogwatch USA chapter list.”