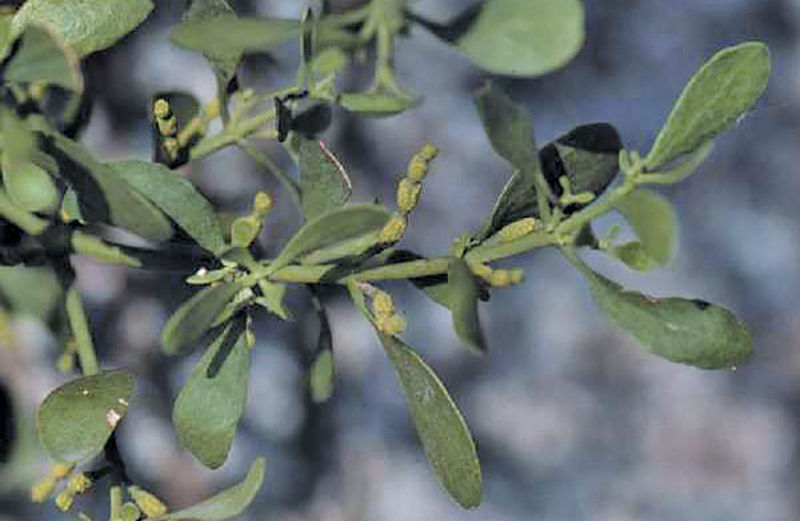 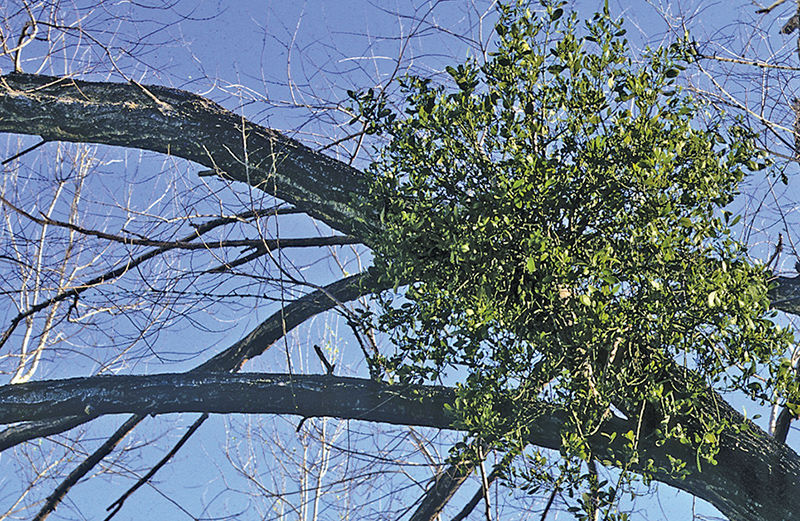 Mistletoe has been part of many European cultures and used for medicinal purposes for hundreds of years. When these peoples migrated to the New World, many brought their practices with them.

Mistletoe is still gathered for holiday decorations. This evergreen does not grow in soil but on the tops of tree branches. Mistletoes are hemiparasitic, meaning the plant absorbs some of its food from tree sap through specialized roots called haustoria.

There are two broad groups, or genera, of mistletoe. Plants in the genus Phoradendron grow on the branches of deciduous (leaf-dropping) trees such as oaks, gums, elms and maples. Dwarf mistletoes, genus Arceuthobium, feed on conifers (cone-bearing trees). North America supports many species of mistletoe, including one native to the East Coast, Phoradendron leucarpum, more commonly known as American or oak mistletoe.

Mistletoe has a well-developed shoot, jointed stems and small, three-lobed white flowers. Dark green leathery leaves and tiny white berries give mistletoe its holiday appeal. American mistletoe is distributed throughout the Southeast from southern Ohio, Illinois and Kansas, east to New Jersey and Pennsylvania, and south to Florida and eastern Texas.

Not all mistletoes deserve this reputation. American mistletoe photosynthesizes its own food and gets only water and minerals from the host tree, but little carbon. While this mistletoe may slow the growth of tree branches, it does not permanently damage its host.

Mistletoe contains a systemic poison that can be fatal to people and pets. However, Native Americans and Europeans have used mistletoes for medicinal purposes. Despite their effects on humans, mistletoe berries are relished by cedar waxwings and other songbirds.

Mistletoe seeds are often dispersed by bird droppings, particularly waxwing droppings. Cedar waxwings, like many fruit-eating or nectar-eating birds, have nonmuscular stomachs that allow seeds to pass through without being ground.

The small, soft seeds of mistletoe berries lack a seed coat. They are protected from a bird’s digestive juices by a viscid layer containing chemicals that speed the seed through the digestive system.

This same layer helps deposited seeds stick to limbs and twigs of host plants. Birds often wipe mistletoe seeds off their beaks and onto other branches, helping to spread the plant.

Poisonous and parasitic, mistletoe seems an odd choice as a symbol for winter holidays. But when other plants have lost their colorful flowers and leaves, mistletoe, with its winter flowers and berries, manifests life when most other plants are bare.