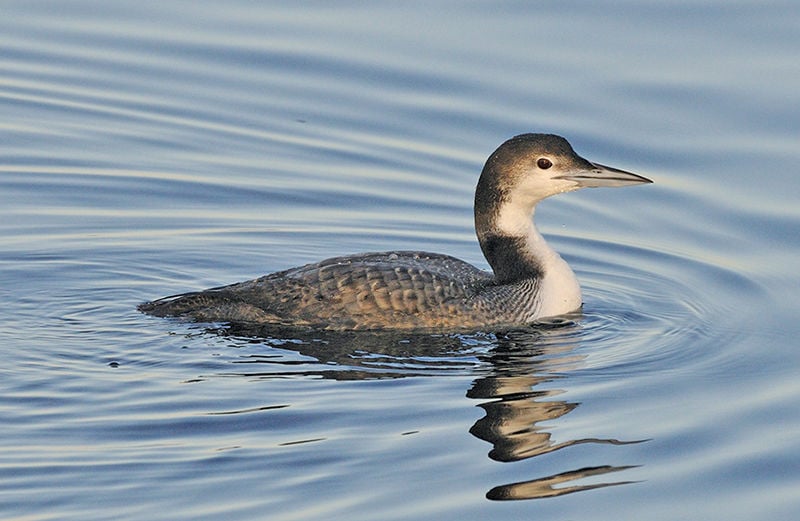 The dull winter plumage of the common loon provides camouflage for the bird. (Bill Thompson / U.S. Fish and Wildlife Service) 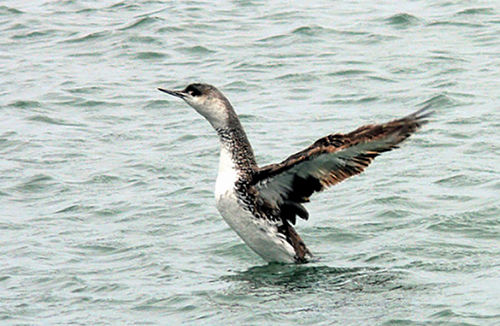 The red-throated loon, shown here in its winter plumage, is the only loon species that can take flight directly from the water. (Lee Karney/U.S. Fish and Wildlife Service)

Loons are the submarines of the bird world. Webbed feet gracefully propel this bird underwater, giving the impression of submerged flight, as the loon stalks its prey. Diving, sometimes as deep as 200 feet, the loon snatches a fish in its dagger-like bill and returns to the surface to eat.

With their sleek bodies, thick necks and short tails, loons float low in the water and can easily ride out fierce storms. Feet located toward the rear of the body make the loons agile in water but awkward on land. They only come ashore to breed or when wounded.

Loons breed in freshwater ponds and slow rivers of the Arctic and subarctic reaches of North America. They use aquatic vegetation to fashion their nests near shorelines.

Though secretive and wary of humans, the loon’s high-pitched wails, wild laughter and mournful yodels pierce the northern air, revealing the bird’s position.

Because of their dependence on water, loons must migrate to ice-free areas during fall and winter. In flight, a loon’s neck curves slightly downward, giving it a hunchbacked appearance. They are swift and powerful fliers, usually migrating singly or in small groups.

Loons begin their southern migration before nearby waters freeze, sometimes as early as August.

On the East Coast, loons winter from New England to the Gulf Coast, including the Chesapeake Bay. They begin arriving in the mid-Atlantic region from mid to late October. By late autumn, most common loons are found along the shoreline from the mid-Bay region south to Virginia.

When people think of loons, it is the common loon that first comes to mind. During breeding season, a common loon is easily identified by the black and white collar around its neck, black head and bill, and black-and-white spotted back. When wintering on the Bay, common loons are not as noticeable because their colors have changed to a gray head, neck and back with white cheeks, throat and breast. Their dull winter colors provide camouflage as they brave the frigid waters of the Chesapeake.

They feed primarily on fish. They hunt in individual territories during the day but often gather in groups — known as rafts — at night.

During breeding season, the red-throated loon sports a gray head, white cheeks, red throat patch, and black-and-white speckled back. Horizontal black and white stripes adorn the back of the neck.

In winter, the head and body are brownish-gray and the throat is white. The red-throated loon is the only loon that can take flight directly from water, springing into the air. All other loons must run along the water’s surface before taking flight.

More sociable than their cousins, red-throated loons often gather in groups during winter to feed.

By December, most red-throated loons on the Chesapeake are dispersed from the Potomac River south to the Bay’s mouth.

If you are out on the Chesapeake or trekking along the shoreline this winter, look out across the water. You may catch a glimpse of a loon riding the crest of a rough wave then disappearing into the trough. Be patient. The loon will reappear on the next wave. Listen carefully and you may even hear its call. The mournful wail gives the impression of homesickness. Perhaps the loon is lamenting its temporary exile from the placid ponds of the northern forests. By March, their instinct to migrate will urge loons to migrate back to familiar nesting areas.

To learn how researchers are tracking red-throated loons, northern gannets and surf scoters to help ensure that offshore energy sources are being developed with minimal impact to marine birds, visit fws.maps.arcgis.com/apps/Cascade/index.html?appid=1766ca200aed4ecca5ec4ed784d1971b.