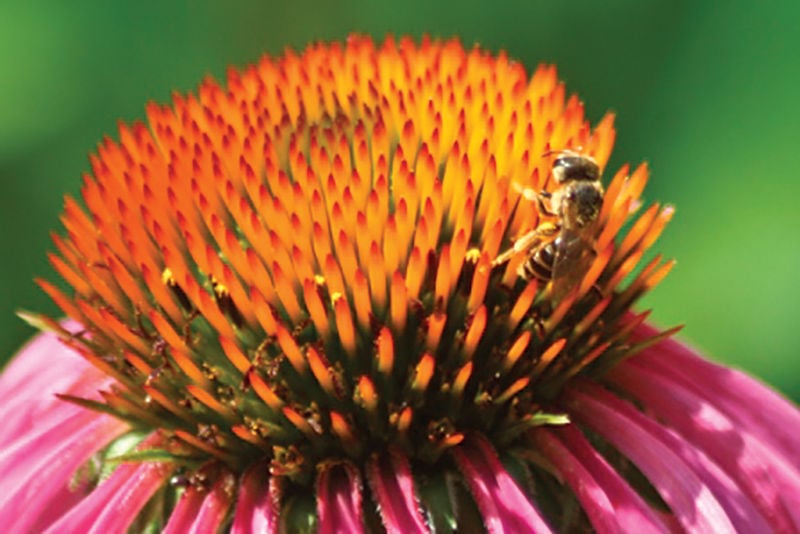 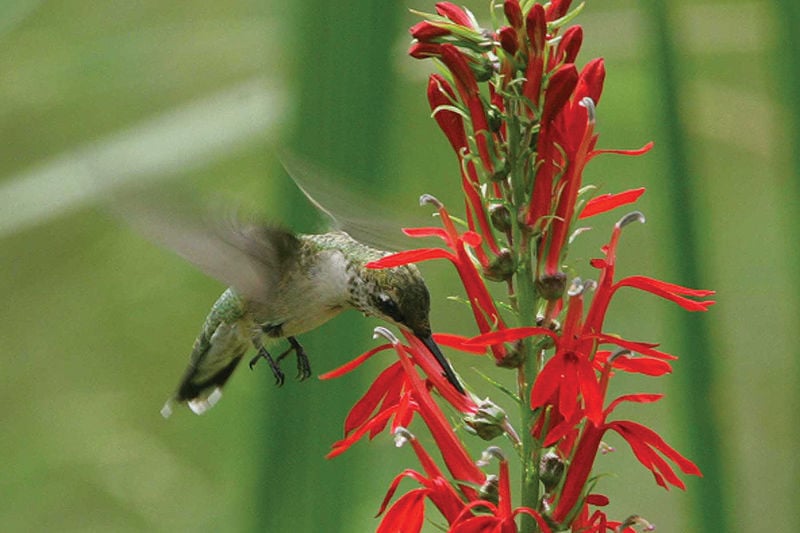 This ruby-throated hummingbird, like most hummingbirds, is attracted to scarlet, orange, red or white tubular-shaped flowers. (U.S. Fish & Wildlife Service)

This ruby-throated hummingbird, like most hummingbirds, is attracted to scarlet, orange, red or white tubular-shaped flowers. (U.S. Fish & Wildlife Service)

Pollination occurs when pollen grains from a flower’s male parts (anthers) are moved to the female part (stigma) of the same species. Once on the stigma, the pollen grain grows a tube that runs down the style to the ovary, where fertilization occurs, producing seeds.

Most plants depend on pollinators to move the pollen from one flower to the next, while others rely on wind or water to move pollen.

Pollinators are nearly as important as sunlight, soil and water to the reproductive success of more than 75 percent of the world’s flowering plants.

They are crucial to the production of most fruits, nuts and berries that people and wildlife depend on. More than 150 food crops in the United States depend on pollinators, including blueberries, apples, oranges, squash, tomatoes and almonds. Worldwide, there are more than 100,000 different animal species that pollinate plants. Insects are the most common pollinators, but as many as 1,500 species of vertebrates also help pollinate plants.

Bees are attracted to bright white, yellow or blue flowers and flowers with contrasting ultraviolet patterns that have fresh, mild or pleasant odors.

Flies are attracted to green, white or cream flowers with little odor or dark brown and purple flowers that have putrid odors.

Butterflies are attracted to bright red and purple flowers with a faint but fresh odor.

The hummingbird moth is active during the day but most moths are active at night and are attracted to pale red, purple, pink or white flowers that emit a strong, sweet odor at night.

Beetles are attracted to white or green flowers with odors ranging from none to strongly fruity or foul.

Pollinator populations are declining. The most probable causes include: habitat loss, fragmentation and degradation (including the introduction and spread of invasive plant species); misuse of pesticides; and diseases and parasites carried into the United States on introduced species.

Plant a garden using native flowering plants. Choose a variety of colors and shapes that will attract a variety of pollinators. Select plants that flower at different times, providing nectar and pollen sources throughout the growing season. Plant in clumps rather than single plants.

Visit the Pollinator Planting Guide at pollinator.org/guides.htm and type in your zip code to learn what plants to use. You’ll get information about pollinators in your area plus a list of the plants they use.

You can also download The Bee Smart™ Pollinator Gardener app at pollinator.org/beesmartapp.htm to get the same information on a smartphone.

Avoid or limit pesticide use. For natural pest control, provide a diverse garden habitat with a variety of plant sizes, heights and types to encourage beneficial insects.

Expect and accept a little bit of insect pest activity. If you must use a pesticide, choose one that is the least toxic to non-pest species and does not persist on vegetation. Apply it in the evening when most pollinators are not as active.