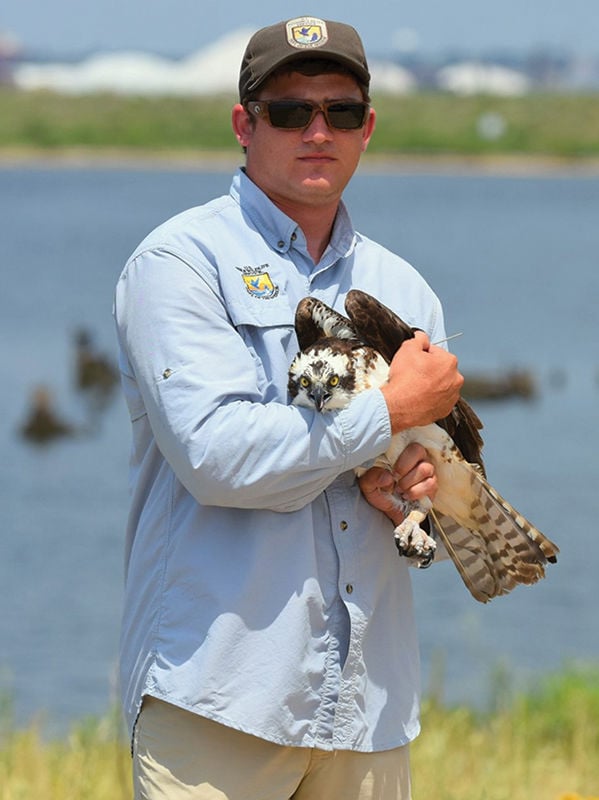 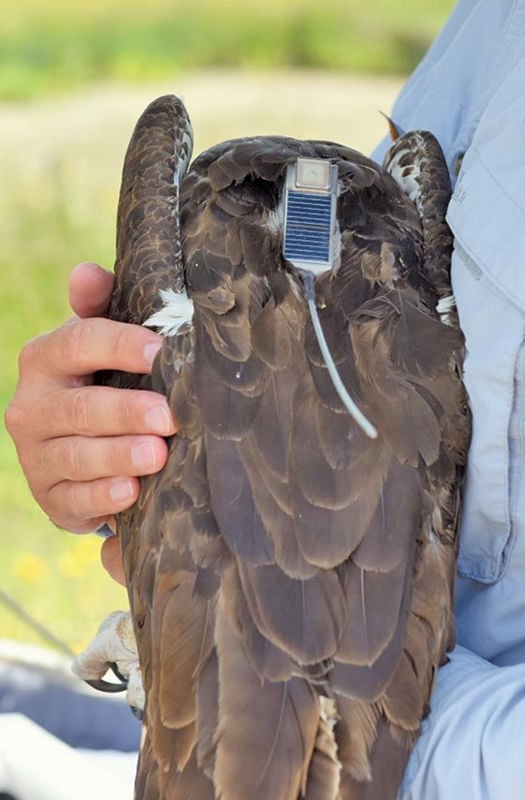 A transmitter, comfortably and securely attached by a harness onto Harriet’s back, tracks her fall migration. (Craig Koppie / USFWS) 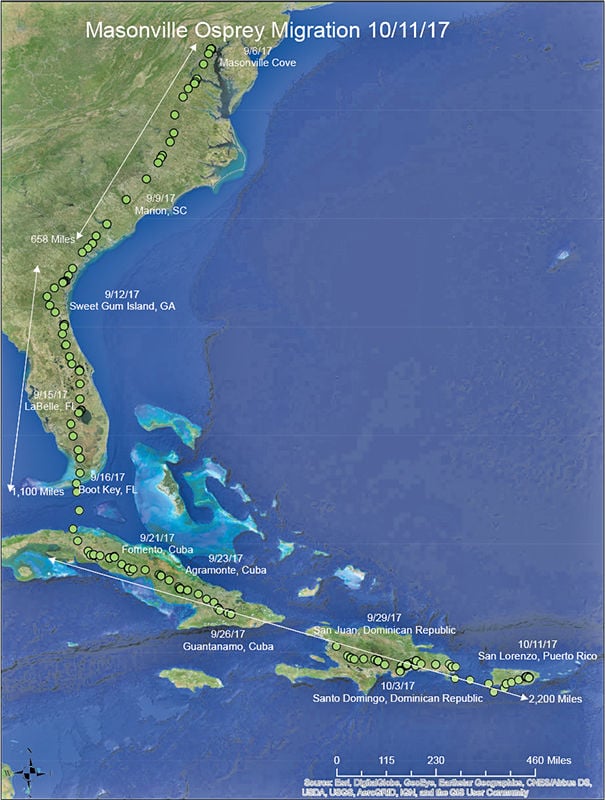 A map shows Harriet’s progress, including where she stopped to wait out hurricanes. (Craig Koppie / USFWS) 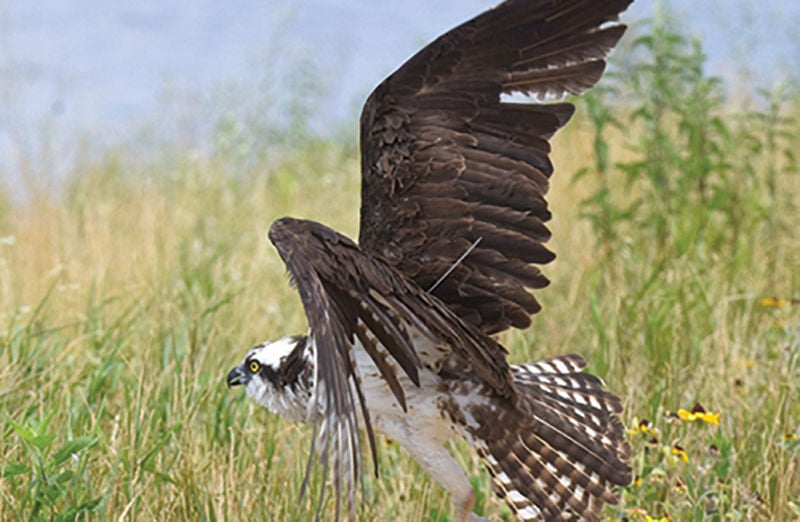 Harriet the Osprey takes off after her release. (Craig Koppie / USFWS)

A transmitter, comfortably and securely attached by a harness onto Harriet’s back, tracks her fall migration. (Craig Koppie / USFWS)

A map shows Harriet’s progress, including where she stopped to wait out hurricanes. (Craig Koppie / USFWS)

Harriet the Osprey takes off after her release. (Craig Koppie / USFWS)

This spring, a pair of ospreys returned to a webcam nesting platform in Baltimore’s Masonville Cove.

This year, the goose scenario repeated itself. The osprey pair came back to the platform only to be pushed out by a pair of geese. The U.S. Fish and Wildlife Service removed most of the nest material, forcing the geese to move on. Osprey webcam fans were pleasantly surprised when Frederick and Harriet returned to build their nest and successfully raised two chicks.

On July 10, Harriet was captured and fitted with a satellite transmitter to track her movements. The transmitter, which has a visible antenna, was comfortably and securely attached by a harness onto Harriet’s back.

Like so many other birds we see around the Chesapeake in spring and summer, ospreys begin to migrate to South America in September for the winter. Most of our Chesapeake osprey spend the colder months there, ranging from Venezuela, to as far south as Paraguay and even Argentina. The satellite transmitter not only helps biologists learn more about bird migration, it also allows Harriet’s fans to watch her movements as she makes this annual journey.

So far, it’s been a harrowing flight. She left Baltimore on Sept. 7 to begin flying south. On Sept. 10, Harriet was along the coast of Georgia about 50 miles south of Savanna and 150 miles northeast of Hurricane Irma! The multiple transmitter readings along the Georgia coastline show how she waited out some of the higher winds from Hurricane Irma farther south before resuming her flight.

By Sept. 16, Harriet had flown approximately 1,126 miles in 10 days with the satellite tracker locating her at Boot Key, FL. With Hurricanes Jose and Maria potentially in her path, she again waited out the bad weather in Florida.

Still going strong, Harriet reached Agramonte, Cuba on Sept. 23, Port-au-Prince, Haiti, on Sept. 28 and Santo Domingo, Dominican Republic, on Oct. 3. As of this writing — Oct. 12 — the transmitter indicated that Harriet was near San Lorenzo, Puerto Rico.

Perhaps the most dangerous leg of her migration has yet to come as she must fly over the Caribbean Sea to South America — almost 500 miles of open water. But she has likely made this journey before, so we are hoping she makes it safely and will continue to watch her progress.

Webcams and satellite transmitters are great tools to monitor wildlife. They also help to bring wildlife closer to a wider audience. Thanks to the Maryland Port Administration for funding the osprey webcam and tracking project. Other partners include Maryland Environmental Service, National Aquarium, Living Classrooms, Greater Baltimore Wilderness Coalition and the Patuxent Research Refuge.