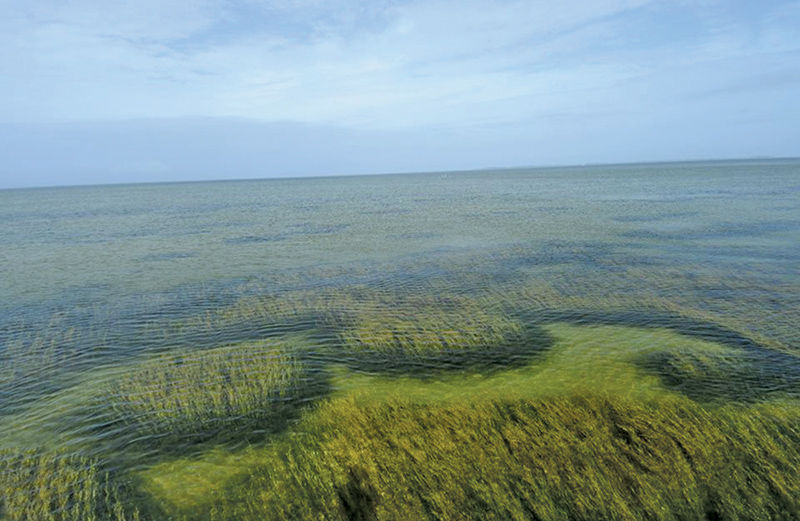 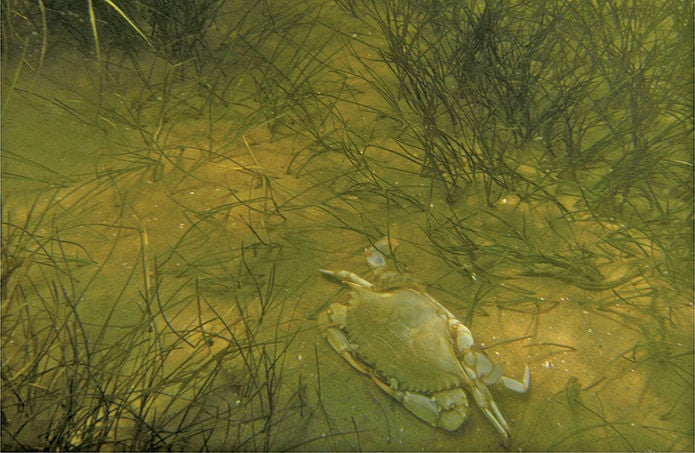 A blue crab takes shelter in a grass bed. Bay grasses are a haven for vulnerable molting blue crabs, shielding them until their shells harden. (U.S. Fish and Wildlife Service)

Like all green plants, Bay grasses produce oxygen, a precious and often decreasing commodity in the Chesapeake. They also help to protect the shoreline from erosion by reducing wave action.

In addition, SAV provide food and habitat for invertebrates, fish and waterfowl. Microscopic zooplankton feed on decaying grasses and, in turn, become food for larger animals, such as fish and clams.

Barnacles and scallop larvae attach themselves to the leaves and stems of eelgrass, a grass species found in saltier waters of the Lower Bay.

Fish, like bluegill and largemouth bass, live among the freshwater grasses of the Upper Bay. Immature blue crabs, minnows and juvenile fish, like striped bass, hide in the grass beds from larger, hungrier mouths. Bay grasses are a haven for vulnerable molting blue crabs, shielding them until their shells harden.

In the fall and winter, migrating waterfowl search the sediment for nutritious seeds, roots and tubers of underwater vegetation. Redhead grass and widgeon grass are favored foods of ducks of the same name, as well as many other waterfowl.

Bay grasses once formed immense underwater meadows, covering up to 200,000 acres in the Chesapeake Bay and its tributaries. But as development and nutrient pollution increased in the late 1960s and early 1970s, in addition to the blow dealt by Tropical Storm Agnes in 1972, these huge grass beds began to decline. By 1984, they had been reduced to 38,000 acres.

Factors that affect water clarity have, in turn, affected the growth and survival of the Bay’s grasses.

Runoff from farms, residential and commercial developments, and road construction, as well as shoreline erosion, add sediment to the water. Suspended sediment clouds the water, reducing the amount of sunlight that plants need to survive. Often, sediment covers the plants completely.

The Bay’s grasses absorb nutrients such as nitrogen and phosphorus. But excess nutrients from sewage treatment plants, septic systems, agricultural fields and fertilized lawns promote the rapid growth of algae, creating blooms. When these blooms die and decompose, valuable oxygen is consumed.

A pollution diet established in 2010 by the U.S. Environmental Protection Agency, formally called the Chesapeake Bay Total Maximum Daily Load, requires Chesapeake Bay states to reduce specific pollutants entering the Bay to target levels on a fixed schedule. This has helped to lead to a recovery of SAV in the Chesapeake. Since 1984, the quantity of nitrogen entering the Bay has decreased by 23 percent and phosphorus has decreased by 8 percent.

And, in 2016, about 97,433 acres of Bay grasses were mapped in the Chesapeake Bay. The grass beds at the mouth of the Susquehanna River continued their four-year recovery after Hurricane Irene and Tropical Storm Lee. Plus, at more than 10,000 acres, SAV from Smith Island to Tangier Island has formed the biggest grass bed in the Bay. While this is great news, it is still less than half of the acreage the Chesapeake Bay once supported.

Everyone living in the 64,000-square-mile watershed can help promote healthy Bay grasses. Here’s what you can do: